Borrowed Billionaire #5 Set it on Fire 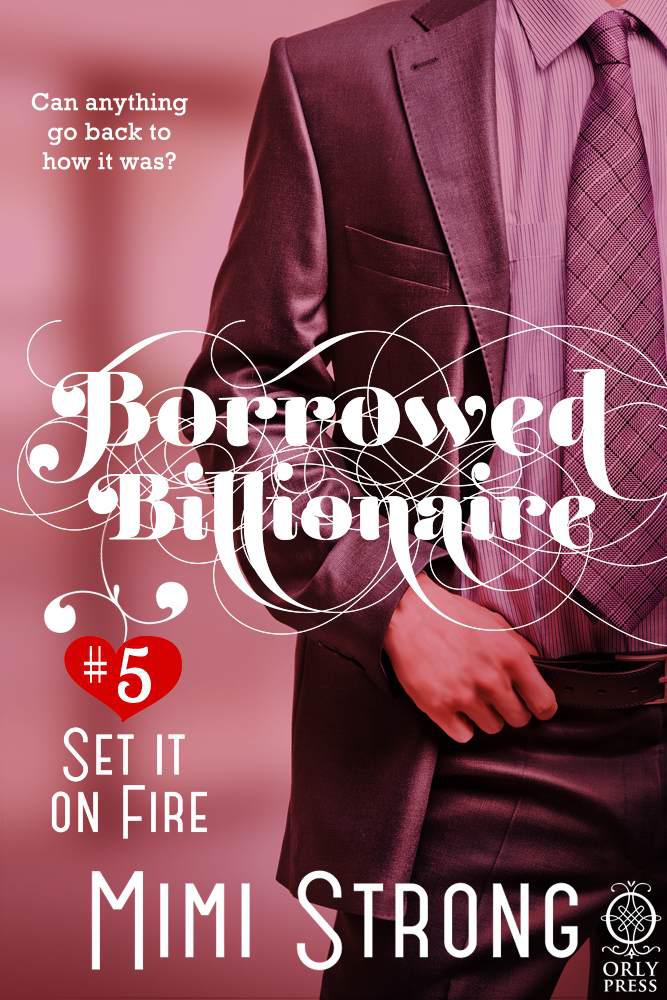 The Yellowstripe Basslet, a cheery pink and yellow fish, darted in front of me as I tried to hold on to my consciousness.

I had to keep breathing normally through the scuba diving regulator and not panic. That meant not looking down at my leg to see why it was bleeding. I swam to Suzanne and tapped her on the shoulder. Bubbles plumed up. She took the longest time to turn around, and before she did, I felt hands on me.

Luthor.
He was there.

Everyone was wildly waving around, trying to communicate, and my head was reeling. I felt like I might throw up, which I knew could kill me. I'd choke to death, under the sea.

Luthor grabbed my shoulders and brought his face close to mine. He gazed into my eyes, and I found strength in him.

We all swam up together.

The surface, above the water, was chaotic. People were yelling. Suzanne was crying, and Simon was a wreck.

We got on board the boat, and they got my scuba suit peeled off. I had an ugly gash on my leg, near the shin, from the stingray.

Despite my injury, I had to pat Suzanne's hand on the boat ride back to the resort. Lucky for me, Luthor Thorne was a rock. He didn't say much, and I could see the tension in his jaw when he thought I wasn't looking, but he put his arm around me and told me I would be fine. I believed him.

“You'll be back diving in no time,” he said.

I avoided looking at my leg, and looked at him instead. The nausea that had first hit me underwater came back with a vengeance. I turned and threw up over the side of the boat, into the churning water. As I was throwing up, tears ran down my cheeks, my nose was running, and I was a revolting mess.

Luthor got out his clean shirt and mopped off my face once I was done heaving.

One of the men on board the boat tried to reassure me, saying, “The nausea is a side effect of the stingray's poison. Try to stay calm. The faster your heart beats, the more quickly the poison spreads.”

Him telling me this only made my heart beat faster, of course. I turned and threw up again, even though it was just dry heaves.

Stingrays don't normally attack people. The one who got me must have been startled when I stepped on him, and stung out of reflex alone. They're flat as pancakes and rest at the bottom of the sea, where they blend in perfectly. As I tried to stay calm and not throw up on Luthor, the
helpful
man on the boat advised me to slide my feet along the sand if I were to go wading in at the shoreline. At that point, I didn't want to get in any water ever again, let alone the ocean.

We got back to the resort, and I was treated there by a woman doctor who was staying at the resort.

She treated me in the kitchen, for better access to boiling water.

Luthor hovered around, as nervous as Suzanne and Simon. I tried to send them all away, but they wouldn't leave my side.

Luthor offered to fly another doctor in, but the woman assured him she had it under control. She squeezed my ankle and examined the injury.

I gasped and saw white light, and stars, too. “I'll have that mojito now,” I joked.

The woman, an Australian doctor, shook her head. “No mojito tonight. But I have good news. It doesn't look like the stinger embedded. You could still have an ultrasound to be certain, but the wound looks clean. You got lucky. Didn't nick an artery or anything precious.”

Glancing down at the gash, I said, “My shin is precious to me.”

She flashed a large silver needle and applied topical freezing to the area, then quickly stitched the wound.

The treatment for the stingray venom, strangely enough, is hot water. We soaked my lower leg in a bucket full of water as hot as I could stand it. Apparently, the heat denatures the venom.

Me and my little party were shifted over to near the dish washing station, and before too long, the kitchen got busy with preparations for dinner.

The doctor finished the stitches, packed up her kit, and patted me on the knee. “I think you'll live,” she said, offering her first smile of the day. She also took a long, appreciative look over at Luthor, with no shirt on, and licked her lips. “Take it easy tonight,” she said to me as she left.

Simon and Suzanne were satisfied I wasn't about to die, and went off to change and get ready for dinner.

Luthor sat beside me, checking messages and email on his phone. He looked up at me once we were alone and said, “I can turn this off. Just say the word.”

“No, no.” My voice sounded funny coming out of my head. The painkillers were kicking in, and I had a floating feeling, offset by the flat feeling of shock. “You didn't come to Indonesia to sit in a kitchen. You can check your email. Hey, is there any email for me?”

He gave me an amused look. “Nope, just for me.”

“Good,” I said, waving a hand to show how laid-back I was. “Because I am not in the mood for business. Suzanne always sends me ten emails a day. Did you know that?”

I slapped my hand over my mouth, then whispered. “I feel weird.”

“We should get you over to the villa, to rest.”

I pulled my foot out of the hot water bath. “The soup is done.”

Luthor got me to my feet, and the kitchen staff came over with a basket of food for us to take back to the villa, as I'd be missing dinner.

That evening, our last scheduled night at the resort in Indonesia, I was a little loopy from the painkillers, not to mention the white wine I'd insisted I could have from the mini fridge.

We'd enjoyed a lovely picnic in our room, just the two of us.

My brain was mush. I had words in my head, and I'd say them, but they'd come out all wrong.

For example, I wanted to express how lovely the private pool outside our villa seemed in the moonlight. Instead, I said, “Me pool.”

Luthor shook his head and said, grinning, “You're not a pool, Lexie.”

We were seated on the little sofa in the room, me still in my two-piece swimsuit, and so relaxed and drugged-up that I wasn't sucking in my tummy or keeping my posture perfect for Luthor. He was equally relaxed, and shirtless, yet even slouched he looked delicious.

I reached over and squeezed the area around his navel. “Why do you have no body fat? Do rich people have some cream I don't know about?”

He grabbed my hands, encouraging them up and over his chest, then around his neck so he could kiss me.

He reached up and gently touched my lips with his fingers. “I can feel them just fine.”

I touched his lips with my fingers as well. He hadn't shaved that day and his upper lip was pleasantly stubbly, in contrast to his soft lips. He kissed my fingers, his hazel eyes gazing into mine, as hungry as ever. There was a hollowness to his cheeks that gave him a look of always wanting. It made me yearn to satisfy his every need.

He pulled my hand away and kissed my lips, pulling me into him. As I shifted, one foot brushed up against the bandaged injury on my shin and I tensed from the pain, though it was a dull pain thanks to the pills and wine.

Luthor pulled back and gave me a worried look. “I don't want to hurt you.”

We stared at each other for a moment, and then he got up, saying, “Let's move you to the bed.”

With my arm over his shoulders, I hopped over to the bed. I could walk on the injured leg, as nothing was actually broken, but it didn't feel good because of the swelling. He picked me up and set me on the bed, then took one of the pillows and propped up my bandaged leg.

I thought he was going to lie down next to me, to continue the kissing we'd started, but he held back, standing there.

“I'm sorry,” I said, and the next thing I knew, I was crying. The injury, the scare, the emotions, the stitches, the wine, and
Luthor Thorne
—it was all too much.

He sat down next to me on the bed and looked really uncomfortable. “Don't be sorry, Lexie. You didn't do anything wrong.”

Sniffing, I said, “I ruined your vacation.”

He turned back and gave me a reassuring smile. “You scared me down there. That's all. Simon and I were swimming over to meet up with you girls, and I saw the whole thing happen. The sand was calm, and then the stingray was flashing past us. I should apologize to you. I should have been your diving buddy. I would have looked out for you.”

“Yes, of course. I didn't mean anything bad by Suzanne. She didn't do anything wrong. It's just that ...” He picked up my hand and stroked my fingers. “I wouldn't have turned my back on you for even a second. I wouldn't have taken my eyes off you.”

I closed my eyes and shook my head, a big goofy grin on my face. “You are just trying to get me into bed.”

I looked around at the nubby cotton sheets. “I am! Then you're trying to get my clothes off.”

He let go of my hand and turned to adjust the pillow under my leg. “It's been a long day. I'll sleep on the sofa. You get some rest.”

He got up from the edge of the bed.

He circled around the bed and came to lie next to me, still wearing his shorts. He rested, up on one elbow, and stroked my cheek. “There, you stopped crying already. Feel better?”

I surprised myself with the next thing I said, which was, “I miss my mother.”

He took it in stride, saying, “We're a long way from home. Perfectly natural to miss your family.”

“What about … your parents? I don't know them.”

He threw an arm over me and snuggled in next to me.

He said, “I do miss my parents when I haven't seen them in a while. Then we get together, and within about five hours or so, I remember why I moved out. Don't get me wrong, they're great people, but they can be a little intense.”

“No!” I said in mock seriousness. And then, since I was so relaxed on the medication, I asked him, “Were you guys always rich? I should have googled you or something. I feel embarrassed now.” I hid my face in my hands. “I'm sorry. That was rude
.
”

“Lexie, it's not like I murdered a bunch of people. We can talk about my situation, as long as it doesn't make you uncomfortable.”

“I did grow up with a lot of money, though, and all the problems that come with that. I'm not asking you to feel sorry for me, the poor little rich boy, but my life has had its ups and downs. I had a brother who died of childhood leukemia.”

“There are some things that even all the money in the world can't fix. I was eight when Jason died. Things were hard for a while, and then things got better. It's been thirty years since he first got sick, and nothing worse has happened since then. So, I guess I've been lucky.”