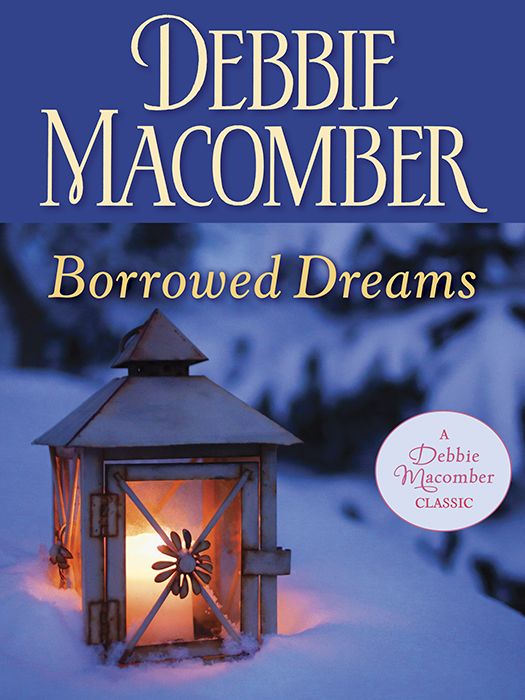 Borrowed Dreams
is a work of fiction. Names, characters, places, and incidents either are the product of the author’s imagination or are used fictitiously. Any resemblance to actual persons, living or dead, events, or locales is entirely coincidental.

Originally published in paperback in the United States by Silhouette Books, New York, in 1985.

One of the questions readers often ask is what inspires a certain story. You’ll be surprised to know that the idea for
Borrowed Dreams
came from a Barbra Streisand song. I remember humming along to the song “Second Hand Rose” and thinking of my father. My dad was the youngest boy in a family of eight. He wore hand-me-down clothes his entire childhood. One of the big moments of his life came when he was able to purchase a brand-new suit, which he paid for with his own money.

It didn’t take long before the song and my dad’s childhood stories captured my writer’s imagination.
Borrowed Dreams
is the result. I wrote the book early in my writing career. Because of the technological changes since the original publication, I’ve refreshed the stories so they are slightly changed.

Feedback from my readers has guided my career. I find your letters and notes highly informative and helpful. You can reach me any number of ways. Either by logging on to my website at
DebbieMacomber.com
and leaving me a message or by writing me at P.O. Box 1458, Port Orchard, WA 98366. You can also find me on Facebook.

I hope you enjoy this story that is set in the beautiful state of Alaska and that you’ll have the opportunity to visit there yourself one day.

The World of Debbie Macomber

Excerpt from
The Inn at Rose Harbor

“Don’t worry about a thing,” George Hamlyn stated casually on his way out the door.

“Yes … but—” Carly Grieves interrupted. This was her first day on the job in Anchorage, Alaska, and she was hoping for a few more instructions. “But … what would you like me to do?”

“Take any phone messages and straighten the place up a bit. That should keep you busy for the day.” He removed his faded cap and wiped his forearm across his wide brow as he paused just inside the open doorway.

All day!
Carly mused irritably. “What time should I expect you back?”

“Not until afternoon at the earliest. I’m late now.” His voice was tinged with impatience. “A couple of drivers will be checking in soon. They have their instructions.”

Fleetingly, Carly wondered if their orders were as vague as her own.

“See you later.” George tossed her a half-smile and was out the door before she could form another protest.

Carly dropped both hands lifelessly to her sides in frustrated displeasure. How could George possibly expect her to manage the entire office on her own? But, apparently, he did just that. On her first day, no less. With only a minimum of instruction, she was to take over the management of Alaska Freight Forwarding in her employer’s absence.

“Didn’t Diana warn you this would happen?” She spoke out loud, standing in the middle of the room, feeling hopelessly inadequate. Good heavens, what had she gotten herself into with this job?

Hands on hips, Carly surveyed the room’s messy interior. George had explained, apologetically, that his last traffic supervisor had left three months ago. One look at the office confirmed his statement. She couldn’t help wonder how anyone could run a profitable business in such chaos. The long counter was covered with order forms and a variety of correspondence, some stained with dried coffee; the ashtray that sat at one end was filled to overflowing. Cardboard boxes littered the floor, some stacked as high as the ceiling. The two desks were a disaster; a second full ashtray rested in the center of hers, on top of stacked papers, and empty
coffee mugs dotted its once polished wood surface. The air was heavy with the smell of stale tobacco.

Forcefully expelling an uneven sigh, Carly paused and wound a strand of rich brown hair around her ear.

Straighten the place up a bit!
Her mind mimicked George’s words. She hadn’t come all the way from Seattle to clean offices. Her title was traffic supervisor, not janitor!

Annoyed with herself for letting George walk all over her, Carly got her desk in reasonable order and straightened the papers on the counter. She grimaced as she examined the inside of the coffeepot. It looked like someone had dumped chocolate syrup in it. She guessed it had never been washed.

When the phone rang, she answered in a brisk, professional tone. “Alaska Freight Forwarding.”

A short hesitation followed. “Who’s this?”

Squaring her shoulders, she replied crisply, “Carly Grieves. May I ask who’s calling?”

The man at the other end of the line ignored the question. “Let me talk to George.”

It seemed no one in Alaska had manners. “George is out for the day. May I ask who’s calling?”

Whoever was on the line let out a curse.

“When do you expect him back?”

“I’ll be there in ten minutes.” With that, he abruptly severed their connection.

Sighing, Carly replaced the receiver. Apparently Mr. Blanky Blank thought she could tell him something more in person.

A few minutes later, the door burst open and a man as lean and serious as an arctic wolf strode briskly inside and stopped just short of the counter. Dark flecks sparked with interest in eyes that were wide and deeply set. He was dressed in a faded jean jacket and worn jeans, and his Western-style, checkered shirt was open at the throat to reveal a broad chest with a sprinkling of curly, dark hair.

“Carly Grieves?” he questioned as his mouth quirked into a coaxing smile.

“Mr. Blanky Blank?” she returned, and smiled. His lean face was tanned from exposure
to the elements. The dark, wind-tossed hair was indifferent to any style. This man was earthy and perhaps a little wild—the kind of wild that immediately gave women the desire to tame. Carly was no exception.

“Brand St. Clair,” he murmured, his friendly eyes not leaving hers as he extended his hand.

Her own much smaller hand was enveloped in his calloused, roughened one. “I’m taking a truck,” he announced without preamble.

“I haven’t got time to explain. Tell George I was by—he’ll understand.”

“I can’t let you do that … I don’t think …” Carly stammered, not knowing what to do. Brand St. Clair wasn’t on the clipboard that listed Alaska Freight Forwarding employees. What if one of the men from the warehouse needed a truck later? She didn’t know this man. True, he was strikingly attractive, but he’d undoubtedly used that to his advantage more than once. “I can’t let you do that,” she decided firmly, her voice gaining strength.

Brand smiled, but the amusement didn’t touch his dusky, dark eyes. Despite the casual way he was leaning against the counter, Carly recognized that he was tense and alert. The thought came that this man was deceptive. For all his good looks and charming smile, it could be unwise to cross him.

“I apologize if this is inconvenient,” she began, and clasped her hands together with determination. “But I’ve only just started this job. I don’t know you. I don’t know if George Hamlyn is in the habit of lending out his trucks, and furthermore—”

“I’ll accept full responsibility.” He took his wallet from his back hip pocket and withdrew a business card, handing it to her.

Carly read the small print. Brand was a pilot who freelanced his services to freight operators.

“A hiker in Denali Park has been injured,” he explained shortly. “I’m meeting the park rangers and airlifting him to British Columbia.” The impatient way he spoke told Carly he wasn’t accustomed to making explanations.

She unclenched and clenched her fist again. “All right,” she finally conceded, and handed
over the set of keys.

He gave her a brief salute and was out the door.

She stood at the wide front window that faced the street and watched as Brand backed the pickup truck onto the road, changed gears, and sped out of sight. Shrugging one shoulder, she arched two delicate brows expressively. Life in the north could certainly be unnerving.

“A pilot,” she murmured. Flying was something that had intrigued her from childhood. The idea of soaring thousands of feet above the earth with only a humming engine keeping her aloft produced a thrill of adventure. Carly wondered fleetingly if she’d get the opportunity to learn to fly while in Alaska.

She paused, continuing to stand at the window. Her attraction to the rugged stranger surprised her. She preferred her men tame and uncomplicated, but Brand St. Clair had aroused her curiosity. She couldn’t put her finger on what it was now, but it felt as real and intense as anything she’d ever experienced. He exuded an animal magnetism. She’d been exposed to those male qualities a hundred times and had walked away yawning. Whatever it was about him, Carly was intrigued. She found she was affected by their short encounter. She stood looking out the office window, watching the road long after the truck was out of sight.

Once the Formica counter was cleaned, the orders piled in neat stacks, and the boxes pushed to one side of the office, Carly took a short break. The phone rang several times and Carly wrote down the messages dutifully, placing them on George’s desk. A warehouse man came in and introduced himself before lunch, but was gone before Carly could question him about the truck Brand St. Clair had taken.

With time on her hands, the afternoon dragged, and Carly busied herself by sorting through the filing cabinets. If the office was in disarray, it was nothing compared to the haphazard methods George Hamlyn employed for filing.

When George sauntered in around five he stopped in the doorway and glanced around before giving Carly an approving nod.

“I’d like to talk to you a minute,” she said stiffly. She wasn’t above admitting she’d made a mistake by moving to Alaska. She could cut her losses and head back to Seattle. If he needed someone to clean house, she wasn’t it.

“Sure.” He shrugged and sat down at his desk. Although George possessed a full head of white hair, he didn’t look more than fifty. Guessing his age was difficult. George’s eyes sparkled
with life and vitality. “What can I do for you?” he asked as he rolled back his chair and casually rested an ankle on top of his knee.

Carly remained standing. “First off, I’m a freight traffic supervisor. I didn’t cart everything I own thousands of miles to clean your coffeepot or anything else.”

“That’s fine.” George’s smile was absent as he shuffled through the phone messages. “Contact a janitorial service. I’ve been meaning to do that myself.”

Sellevision by Augusten Burroughs
A Grain of Mustard Seed by May Sarton
The Mountain and The City: A Post-Apocalyptic Tale by Martinez, Brian
Voodoo Kiss by Jayde Scott
Adam 483: Man or Machine? by Ruth D. Kerce
Love and Mistletoe by Zara Keane
Abraham Allegiant (Chronicles of the Nephilim Book 4) by Brian Godawa
Brass Go-Between by Ross Thomas
A Week for Love to Bloom by Wolfe, Scarlet
The Lotus Palace by Jeannie Lin