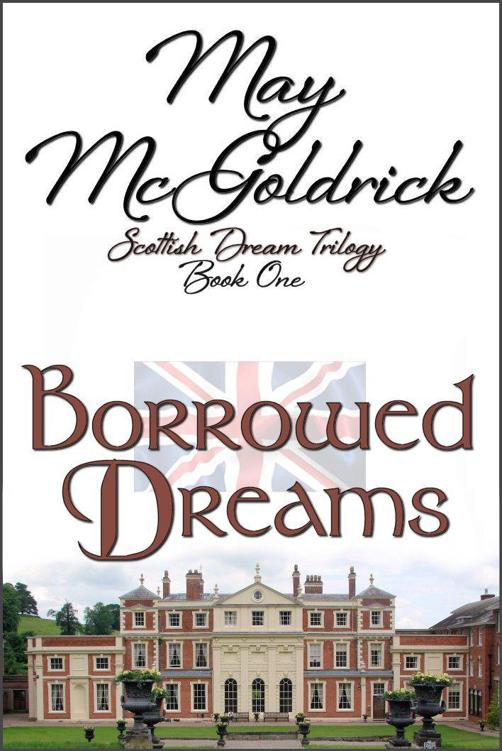 All rights reserved. Except for use in any review, the
reproduction or utilization of this work in whole or in part in any form by any
electronic, mechanical or other means, now known or hereafter invented,
including xerography, photocopying and recording, or in any information storage
or retrieval system, is forbidden without the written permission of the publisher:
May McGoldrick Books, PO Box 665, Watertown, CT 06795.

First Published by NAL, an
imprint of Dutton Signet, a division of Penguin Books, USA, Inc.

“We are going in the wrong
direction!”

Instead of turning west at the
ancient Temple Bar, the carriage had turned east on Fleet Street, and the
driver was now whipping his team through the busy traffic going into the City.
The lawyer raised the head of his cane to the roof of the carriage to get the
attention of the driver, but the touch of Millicent’s gloved hand on his sleeve
made him stop.

“He is going where he was directed,
Sir Oliver. There is an urgent matter I need to see to at the wharves.”

“At the wharves? But…but we are already somewhat pressed for time for your appointment, m’lady.”

“This shall not take very long.”

He sank back against the seat,
somewhat relieved. “Since we have a little time then, perhaps I could ask you a
few questions about the secretive nature of this meeting we have been summoned
to attend this morning.”

“Please, Sir Oliver,” Millicent
pleaded quietly. “Can your questions wait until after my business at the
wharves? I am afraid my mind is rather distracted right now.”

All his questions withered on the
man’s tongue as Lady Wentworth turned her face toward the window and the
passing street scene. A short time later the carriage passed by St. Paul’s Cathedral and began wending its way down through a rough and odorous area in
the direction of the Thames. By the time they crossed Fish Street, with its
derelict sheds and warehouses, the lawyer could restrain himself no longer.

“Would you at least tell me the
nature of this business at the wharves, m’lady?”

“We are going to an auction.”

Oliver Birch looked out the window
at the milling crowds of workmen and pickpockets and whores. “M’lady, I hope
you intend to stay in the carriage and that you will allow me to instruct one
of the grooms to obtain what you are looking for.”

“I am sorry, sir, but it is
essential that I see to this myself.”

The lawyer grasped the side of the
rocking carriage as the driver turned into the courtyard of a tumbledown wreck
of a building on Brooke’s Wharf. Outside the window, an odd mix of well-dressed
gentlemen and shabby merchants and seamen stood in attendance on an auction
that, from the looks of things, was already well under way.

“At least give me the details of
what you intend to do here, Lady Wentworth.” Birch climbed out of the carriage
first. Despite the biting wind off the Thames, the smells of the place—combined
with the stink of the river’s edge—were appalling.

“I read about the auction in the
Gazette
this morning. They are selling off the estate of a deceased physician by the
name of Dombey. The ruined man moved back from Jamaica last month.” She pulled
the hood up on her woolen cloak and accepted his hand as she stepped out. “Before he was put in debtor’s prison, he succumbed to ill health some ten days ago.”

Birch had to hurry to keep up with
Millicent as she pushed her way through the crowd to the front row. “And what, may I ask, in Dr. Dombey’s estate is of interest to you?”

She didn’t answer, and the lawyer
found his client’s gray eyes searching anxiously past the personal articles
that were laid out on a makeshift platform. “I hope I am not too late.”

The lawyer did not ask any more
questions as Millicent’s attention turned sharply toward the set of wide doors
that led into the building. The bailiff was dragging out a frail-looking
African woman wrapped in a tattered blanket and wearing only a dirty shift
under it. A crate was placed on the platform, and the old woman—her neck and
hands and feet in shackles—was pushed roughly onto it.

Birch closed his eyes for a moment
to control his disgust at this evidence of the barbaric and dishonorable trade
that continued to curse the nation.

“Lookee, gennelmen. This here slave
was Dr. Dombey’s personal maid,” the auctioneer shouted. “She’s the only Negro
the medical bloke carried back with him from Jamaica. Aye, sure, she’s a rum
thing with her wrinkled face. And she’s of an age to rival Methuselah. But gennelmen, she’s said to be a weritable African queen, she is, and bright as crystal, they
tell me. So e’en though she’s worth a good thirty pounds, what say we start the
bidding of at…at a pound.”

There was loud jeering and laughter
from the group.

“Look, now, gennelmen. ‘Ow about
ten shillings then?” the auctioneer announced over the roar of the crowd.
“She’s good teeth, she has.” He pulled opened the woman’s mouth roughly. There
were crusts of blood on the chapped lips. “Ten shillings? Who’ll start the
bidding at ten shillings?”

“What bloody good is she?” somebody
shouted.

“The woman is nothing more than a
refuse slave,” another responded. “If we were in Port Royal, she’d be left to
die on the wharf.”

Birch glanced worriedly at
Millicent and found a look of pain etched on her face. Tears were glimmering on
the edges of her eyelids.

“This is no place for you to be,
m’lady,” he whispered quietly. “It is not right for you to be witnessing this.
Whatever you came for must be already gone.”

“The advertisement said she was a
fine African lass.” A middle-aged clerk, sneering from his place at the edge of
the platform, threw a crumpled
Gazette
at the old woman. “Why, she’s too
old to even be good for—”

Every eye in the place turned to
her, and silence gripped the throng. Even the auctioneer seemed lost for words
for a moment. Birch saw the woman’s wrinkled eyelids open a fraction and stare
at Millicent.

“Six pounds.” A second bid from
someone deep in the crowd silenced the auctioneer again. All heads in unison
turned to the back of the auction yard.

On the platform the man’s face
broke out into a grin as the crowds parted, showing a nattily dressed clerk
holding up a rolled newspaper. “Why, I see Mr. Hyde’s clerk is in attendance.
Thank ye fer yer bid, Harry.”

Birch scanned the number of
carriages in the yard, wondering from which one of them Jasper Hyde was issuing
his commands. A large plantation owner in the West Indies and supposedly a good
friend to the late Squire Wentworth, the Englishman had wasted no time in
taking over all of the squire’s properties in the Caribbean after his death in
payment for debts Wentworth had owed him. And if that were not enough, since
arriving in England, Mr. Hyde had positioned himself as Lady Wentworth’s chief
nemesis, buying up the rest of the bills of exchange and promissory notes the squire
had left behind.

There was a loud gasp of disbelief
and the crowd began to shift uncomfortably.

The lawyer turned to Millicent. “He
is playing with you, m’lady,” he said quietly. “I do not believe it would be
wise—”

“Fifty pounds,” the clerk called
without a trace of emotion.

A group of sailors near the edge of
the platform turned and scoffed loudly at the clerk for pushing up the price.

“I cannot let him do this. Dr.
Dombey and this woman spent a great deal of time on Wentworth’s plantations in Jamaica. From the stories I’ve heard from Jonah and some of the others at Melbury Hall, she
became a person of some importance to them.” She nodded to the auctioneer.
“Sixty pounds.”

Birch watched Jasper Hyde’s clerk
appear to squirm a little. The man turned and looked toward the line of
carriages. The rolled newspaper rose in the air before the caller could repeat
the last bid. “Seventy.”

The rumbling in the crowd became
more pronounced. There were sharp comments to the effect that he should let the
woman have the slave.
A couple of the sailors edged threateningly toward
the clerk, muttering derisive obscenities.

“This is all a sick game to Mr.
Hyde,” Millicent whispered, turning away from the platform. “There are many
stories of his brutality on the plantations. The stories about what he did
after taking possession of my husband’s land and slaves are even worse. He is
answerable to no one and has no regard for what few laws are observed there.
This woman has witnessed it all, though. He will hurt her. Kill her, perhaps.”
Her hands fisted. “Sir Oliver, I owe this to my people after all the suffering
Wentworth caused. I cannot in good conscience turn my back when I can save this
one. Not when I have failed all those others that Hyde took.”

“That it, yer ladyship?” the
auctioneer asked. “Yer giving in?”

“Eighty,” she replied, her voice
quavering.

“You cannot afford this, m’lady,” Birch put in firmly but quietly. “Think of the promissory notes Hyde still holds from your
husband. You’ve extended the date of repayment once. But they will all come due
next month, and you are personally liable, to the extent of every last thing
you own. And this includes Melbury Hall. You just cannot add more fuel to his
fire.”

“One hundred pounds.” The clerk’s
shout was instantly swallowed up by a loud response from the crowd. Birch watched the man take a few nervous steps toward the carriages as the same angry sailors
moved closer to him.

“One ten, milady?” the auctioneer,
grinning excitedly, called out from the platform.

“You cannot save every one,
Millicent,” Birch whispered sharply. When first asked by the Earl and the
Countess of Stanmore to represent Lady Wentworth in her legal affairs a year
ago, he’d also been informed of the woman’s great compassion for the Africans whom
her late husband had held as slaves. But his expectations had not come close to
the fervor he’d witnessed since then.

“For all we know, he might already
own this woman. In the same way that he has been acquiring all of the late squire’s
notes, he may have done the same with Dombey. This may just be Jasper Hyde’s
way of draining the last of your available funds.”

As his words sank in, Millicent’s
shoulders sagged. Wiping a tear from her face, she turned and started pushing
her way toward the carriage. Halfway out of the yard, though, she swung around
and raised a hand.

A round of exclamations erupted
from the crowd. Gradually, people parted until she was facing the pale-faced
clerk across the mud and dirt of the yard. Having already retreated to back
edge of the crowd, the man shook his head
at the auctioneer and looked
back at Millicent.