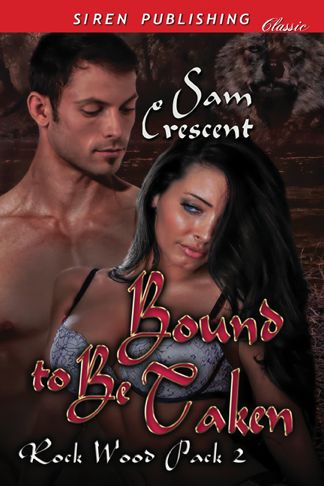 Bound to Be Taken

Titania is one of the weakest members of the Rock Wood Pack, and that makes her a threat. She can't even turn without the full moon.

Cade's feelings for Titania are verging on obsession. He wants her desperately and will do everything to keep her. But Titania doesn't trust him. He's above her, and she'd never survive an attack from one of their pack to claim her spot at his side.

However, their relationship is the last of their problems. Women are going missing, and one of their pack is responsible for the disappearances, but who? It's a race against time before Titania is taken.

All cover art and logo copyright © 2013 by Siren Publishing, Inc.

If you have purchased this copy of
Bound to Be Taken
by Sam Crescent from BookStrand.com or its official distributors, thank you. Also, thank you for not sharing your copy of this book.

This is Sam Crescent’s livelihood. It’s fair and simple. Please respect Ms. Crescent’s right to earn a living from her work.

This story is dedicated to my family for always being there and giving me the time and space to write. Also, I wouldn’t be here without my readers. Thank you so much for your continued support.

Cade rubbed a hand over his head, trying to get used to the new thatch of hair. He’d been growing his hair back for the last few months and wasn’t sure if he liked it. For the last five years he’d made sure to keep his head bald because he hated wasting time on caring for something so insignificant. Hair was hair and he didn’t see the need for it. Keeping his head bald meant he could concentrate on other things like training and protecting the alpha of the Rock Wood pack. The alpha, Micah, currently sat in the corner of the gym with Charlotte—Micah’s human mate—in his lap. His alpha looked so happy and for once in his life Cade felt envious of his friend. Micah had found happiness while Cade still struggled to grab the attention of the woman he wanted. He was the second-in-command, the beta, and yet he couldn’t draw the woman who’d been plaguing his thoughts.

He folded his arms as each pack member currently in residence filed into the gym. All of the pack was living in Micah’s house, which was situated on the outskirts of the town of Rock Wood. The gym had been Cade’s idea and he’d organized the build along with the schedule to train pack members. There were too many rogue werewolves and other hostile packs threatening their peace. Not training their pack was no longer an option. Cade intended to keep Rock Wood pack strong. The only way to do that was to train and prepare the members for every eventuality.

Brandon, the deceased leader of the Eagle pack, had stolen Charlotte with the intent of blackmailing Micah. There were too many risks out there and Cade hated risks. He took control and Rock Wood was as much his pack as it was Micah’s. From the moment Micah took over and claimed the pack as his own, Cade had been there. The Rock Wood pack was his family and Cade would die fighting for it.

Cade gazed over the members of the pack. They all stood along the back wall waiting for him. He noticed Titania stood as far away from him as she could. She also stood with David, a low ranking member. She wore her usual denim skirt and plain shirt. David stood with her and the two looked to be deep in conversation. Both of them were low ranking pack members, as neither of them was a fighter or strong enough to work their way up the ranks. However, when Brandon had taken their queen, Titania had protected Charlotte and gained much respect with the higher ranking members by killing the alpha of the Eagle pack. Cade respected her for protecting Charlotte and he also wanted to spend a good long weekend fucking her. He stared down the length of her body. Even in the loose-fitting clothes, he saw her generous curves. To many of the pack, Titania was considered fat. Her fuller figure wasn’t natural amongst their kind. Cade loved her curves. He craved to get his hands on her body and show her what a good, hard fucking was all about.

Pulling his head out of the gutter, Cade glanced up and down the line at everyone else in the pack.

The other members had on gym clothes and looked ready for his training. Cade turned to Micah and waited for the nod of approval. Jordan, Paul, and Pete were with him to help train the others. They were the only other men he knew strong enough and capable to train the newbies. Cade watched as Charlotte waved at the group. He turned to see Titania wave back. The two women had become close over the last few months. Charlotte refused to have anyone else with her for protection. Titania held the role of protector, friend, and cook. Glancing at the woman he so desperately wanted, Cade noticed the way David squeezed her hand offering comfort to Titania. He didn’t think the couple were lovers. Titania never smelt of anything other than fields where he’d seen her roam in wolf form. From his knowledge of her, Titania had never taken a lover or a mate. She was purely innocent and he wanted to keep her that way.

Micah gave him the nod to start and Cade turned toward the group. The shirt he wore was tight and it didn’t cover all of his tattoos. The one with the lone wolf with the full moon rising behind a load of rocks was—in his mind—the dedication he held for his pack. He owed the Rock Wood pack his life. Without them he’d be dead. They were his family, his blood, and nothing could ever take them away from him. Family meant a great deal to him.

“Right, I’m sure you’re all curious as to why you’re here.” Cade stood in front of the members gaining their attention. With over thirty people in the gym, he raised his voice to be heard by all of them. “The alpha is in agreement with me that we were not prepared for Brandon’s attack a few months ago. You all remember how easily Charlotte, our queen, was taken. It’s not going to happen again. I will not let us become weak. We’re the Rock Wood pack, we’re strong and we fight against our enemies with an iron fist. That is why we’ve decided to implement a training program which will train you for any possible attacks, as well as to protect this pack.”

“If we didn’t have a human queen no one would attack.”

Cade heard Misty mutter from the far side. His temper rose. “Step forward.” His voice echoed off the walls of the gym. The whole room went eerily quiet. Tension mounted where, before Misty’s comment, there was a relaxed feel to the group. Misty despised Charlotte. The other woman had been hoping to be by Micah’s side and to rule the pack. Once Micah marked Charlotte there was no chance of anyone taking her spot.

“Now,” he said, yelling the word out for all to hear. Misty stood forward. Her hand was perched on her hip. Her small breasts were rising and falling with each of her indrawn breasts. He didn’t see the attraction in Misty. She was too skinny and she was a bitch. Misty’s only redeeming quality was her ability to fight. He knew Micah had used her for sex before he met Charlotte. Still, what was it about men who liked thin women? He’d feel he was fucking a bag of bones but that was his opinion, which he kept to himself. The temptation to look at Titania overcame him. Cade fought it with every part of his being. Staring at Misty, he won the small battle inside himself.

“You’ve obviously got something to share, so spill to the group. I’m sure everyone would love to hear what you’ve got to say.” Cade gestured to the rest of the room.

“Everyone knows the queen is a threat to us. She’s human and all the other packs are going to try and break us,” Misty said.

Jordan looked angry as did Micah. It was a shame the Rock Wood pack no longer condoned torture. Cade would so much like to use his chains on her and not in a good way.