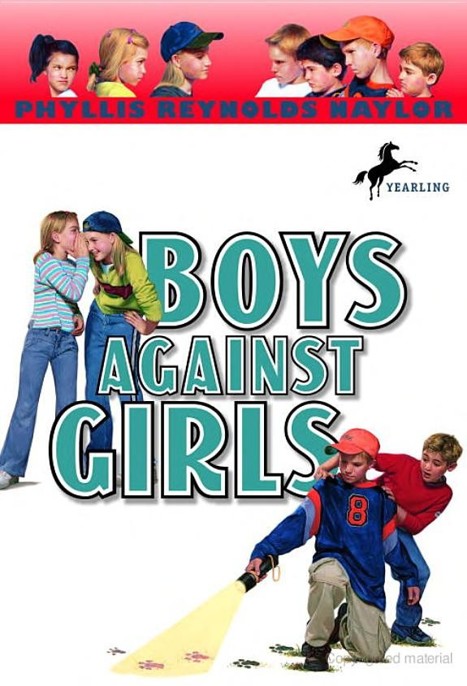 For more than forty years,
Yearling has been the leading name
in classic and award-winning literature
for young readers.

Trust Yearling paperbacks to entertain,
inspire, and promote the love of reading
in all children.

OTHER YEARLING BOOKS
BY PHYLLIS REYNOLDS NAYLOR
YOU WILL ENJOY

THE BOYS START THE WAR

THE GIRLS GET EVEN

A TRAITOR AMONG THE BOYS

A SPY AMONG THE GIRLS

THE GIRLS TAKE OVER

To the people at Loaders’ Bookstore
in Buckhannon, West Virginia,
which is almost, but not quite,
where this story takes place

Two:
call of the Wild

Twenty:
A little Talk with Willy

Twenty-four:
Cruising Down The River

W
ally Hatford usually spent the day after Halloween counting his trick-or-treat candy, trading off Mars bars for Milky Ways, and opening all the little packets of candy corn. He'd pop a whole handful into his mouth at once, and follow that with a couple of chocolate kisses.

But not this Halloween.

Wally and his two older brothers, Jake and Josh, sat numbly in the living room, looking at the candy wrappers scattered about the floor after their party for the girls—the party the Malloy girls had tricked them into giving. Never mind that. the Hatford brothers had tried to trap them in the cemetery and would have dropped worms on their heads if they'd succeeded. The fact that the girls had found them out and beaten them at their own game was too humiliating for words.

“You know what I wish?” said Jake after a while. “I just wish a big tornado would sweep through Buckman and blow them away. Not kill them, exactly—just deposit them back in Ohio where they belong.”

“I wish there would be a big flood and they'd just wash away,” said Josh, his eleven-year-old twin.

Seven-year-old Peter was eating a malted milk ball he'd found under the couch. He'd had no part in the trickery, so his conscience was clear. “What do
you
wish, Wally?” he asked.

Wally wished, quite frankly, that his brothers would quit asking him questions, that's what. He
always
got dragged into things whether he wanted to be or not. And right now he did not want to be.

He was tired of girls. Sick of girls. Bored to death with talking about them. Since the Hatfords’ best friends had moved to Georgia and rented out their house to the Malloys, it had been “the Malloy girls this” and “the Malloy girls that,” and if Jake and Josh hated them so much, why were they always talking about them, looking at them, laughing at them, and thinking about what they were going to do next? It was disgusting.

“Well?” said Jake and Josh together, still waiting for his answer.

Wally had to say something. He sighed. “I wish the abaguchie would carry them off,” he said finally.

“How are you going to get the abaguchie to come and carry off Caroline and her sisters?” asked Peter, wide eyed.

“All we're going to do is scare them a little’ said Josh.

“Scare them a
lot
” said Jake, and he and Josh laughed.

Actually, nobody knew if there was an abaguchie in Buckman at all, and if there was, just what kind of creature it was. For several years various people in Upshur County claimed to have seen a large animal, something like a cat, lurking around in the shadows, running along the edge of the woods, or even crawling about under somebody's window.

Tracks were supposedly found in the dirt, howls were heard in the night—more like “squawls,”
someone said—and sometimes a chicken or cat or a dog was found half eaten. Two different farmers even complained that one of their calves was missing. The newspaper would report these incidents, and everyone would talk about the abaguchie awhile. Then the people of Buckman would lose interest until it happened all over again.

“So we tell the girls about the abaguchie. So what?” Wally said.

“So they'll get scared.
Real
scared. And we'll just sort of help things along’ Jake told him. “Monday, in school, you tell Caroline.”

Wally bolted straight up. “Oh, no¡ Don't get me messed up in this. If you want to scare the girls,
you
tell them.”

“Wally, you've got to!” said Jake. “If we tell Eddie or Beth, they'll never believe us. Old Caroline will believe anything. You know that. And if we can make Caroline believe it, she'll tell her sisters.”

It was going to be like this forever and ever, Wally knew. Unless the Bensons came back at the end of the year, the Malloys would probably stay in Buck-man, and Wally would have to listen to his brothers talk about them for the rest of his life. The Benson boys were the best friends the Hatfords had ever had. Why their father had decided to take a job in Georgia for a year, Wally could not understand. But they had rented their house to the Malloys and,
what's worse, they seemed to be enjoying it down in Georgia.

When he went to bed that night, Wally thought about how he did not want to have to get involved with the girls again.

When he got up the next morning, he thought about how the last thing in the world he wanted to hear was anything at all about the Malloys.

But when he saw the three girls coming across the swinging bridge toward College Avenue and Buck-man Elementary, he imagined how Caroline's eyes would grow big as cantaloupes when he told her about the abaguchie, and he found himself smiling.

It was a cold November day, and only a few stubborn leaves clung to the tree limbs. It took a long while for the West Virginia sun to get up over the rim of the hills and warm the sidewalks, and then it was down again before you knew it, slipping and sliding behind the courthouse.

The Buckman River shone silver in the early morning light where it looped around at the end of Island Avenue and came flowing back again. When you rode into Buckman for the first time, right out to the end of Island Avenue and over the bridge into the business district, you might not realize that the river on your right was the same as the river on your left, and before you knew it, you'd be passing City
Hall and the police department and the college campus.

Wally hung up his jacket, clunked his lunch box on the shelf overhead, and slouched on into the classroom.

Caroline Malloy was there, of course, in the desk right behind his, and she looked fatter. Yes, he was sure of it. Her cheeks were just a little bit puffier than they were before, and Wally was sure it was because his very own Milky Way bars and M&M's were in her stomach instead of his. All because the girls told Mom that the boys had invited them to a Halloween party, and Mom made him and Josh and Jake share all the candy they had collected. His stomach growled more out of anger than hunger.

Maybe he
would
like Caroline to think that there was a creature called an abaguchie around. Maybe he
would
like to see her looking over her shoulder as she went back and forth to school. She wasn't even supposed to be in fourth grade at all, she was supposed to be in third. Just because she was supposed to be super smart—” precocious’ the grown-ups called it—didn't mean he had to like her. Wally began to think that precocious was just about the most awful thing you could possibly be, next to dead.

Everyone was talking about Halloween—what they had done and where they had gone—and when
Caroline finally settled down, Wally turned around and said, “You don't have any pets, do you?”

“What?” said Caroline. Even her neck was fatter, Wally decided. She had probably spent the whole weekend eating Wally's candy.

“Pets. Cats or dogs or rabbits or anything.-”

“Oh, nothing,” said Wally, and turned back around again.

Caroline grabbed at his sweater and tugged.
“Why?”
she insisted.

Wally half turned. “Because the abaguchie's been seen again.”