Read Branches of Time, The Online

Branches of Time, The 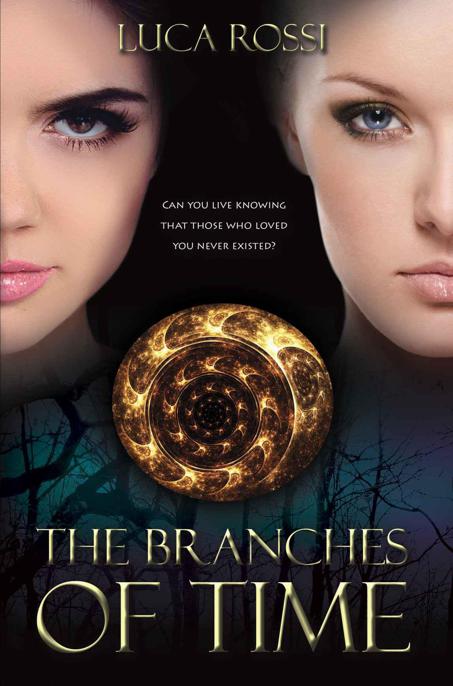 The Branches of Time

The Branches of Time – Volume II

Why does she keep flirting with that moron?
wondered Bashinoir, the best man.

“...to be your lawfully wedded husband?” asked the priest.

The pure white snow fell softly over the guests and the trees of the forest. Several women shivered from the cold. The freezing temperature didn't seem to bother Lil.

All of a sudden a mass of dark shapes darted through the snowflakes. The priest stopped in mid-sentence. Bashinoir watched him waver and then fall backwards, his forehead split open by a sharp shard of stone. A shower of razor-sharp pieces of rock hammered down over the guests. Covering his head with his cape, Bashinoir ran towards his wife.

Men, women and children fell to the ground. The blood seeped through the snow, forming red haloes around the cadavers. Bashinoir grabbed his wife's hand and continued running, pulling her behind him. She tripped and fell. Bashinoir picked her up, lifted her over his shoulder, covered her with his cape and dashed towards a gully in the rock. It was just big enough for Lil to take shelter, as her husband protected her by stretching his own body over the opening. A vortex of screams, wails and sobs whirled behind them. A shard lodged itself into Bashinoir's calf. The blood began gushing out of the wound.

The voices grew quiet. The shower of rock shards had stopped. Bashinoir lifted his head and studied the area around him. “No, don't look up,” he ordered his trembling wife. Bodies were stretched out all over the ground, torn to shreds and floating in a lake of blood.

Bashinoir helped Lil to her feet. She pressed her head against his shoulder, covering her eyes with her hands. Husband and wife headed towards the Temple. He was limping. They passed by a shapeless hunk of flesh, wrapped in a green garment soaked in blood. Bashinoir held his lady even closer. They reached the sacred building. Standing in the doorway, the priestess Miril observed the massacre.

“Black magic has fallen upon our island,” she said. “Come in.”

“Did any others survive?” Bashinoir asked in a weak voice.

The three huddled around the sacred fire. They were the last inhabitants of the frigid island of Turios.

None of the three wanted to break the silence. Despite the sacred fire, they didn't feel the tiniest bit of warmth.

Bashinoir stared at the flame. He observed Lil's face out of the corner of his eye. She was staring at the ground, still trembling slightly. Tears streamed down her face. Bashinoir thought about young Anodil. A surge of jealousy shot through his body, yet he immediately repressed it. He wanted her to explain why.

No, it's not the right time,
he reasoned. He couldn't let jealousy get the better of him right now. In his mind's eye, he watched the shards of rock fall from the clouds yet again. The priestess had said something about black magic.
But why? What did we do to deserve so much cruelty?

Lil couldn't hold back her tears, though she wanted to put up a brave front.
I have nothing left. Everything's gone. They're all dead. My island no longer has a future
, she agonized.

Friends, relatives, parents. The blood of everyone she loved had poured into that red lake staining the snow outside of the Temple. When they walked to the Temple through the expanse of cadavers, not a single moan had come from that pile of bodies without souls.

There were just three of them left now, on an island forgotten by both humans and gods. “Maybe...maybe we should go back and see if anyone survived,” she suggested through her sobs.

The priestess and Bashinoir looked at her. Neither said a word. Bashinoir thought about what he had seen in the snow as he and Lil headed to the Temple. The cadavers on the frozen blanket of snow were nothing more than shapeless heaps. The pointed shards had lacerated their limbs and torn strips of their flesh away. They no longer looked like human beings. No, none of them had made it out. Bashinoir didn't want Lil to go back and see those bodies again. He would rather wait for the following day to go out and burn them himself, alone. He silently hoped it wouldn't snow much over night: then it would be easier to bring the bodies to a woodpile and burn what remained of the people he had shared his life with.

Absorbed in his own thoughts, he absentmindedly sighed, sadly: “Ah...”

The priestess noticed Bashinoir was still losing blood from the wound on his calf.

“Bashinoir, come with me. We have to dress your wound. We need to find a warmer place. After we take care of your leg, we'll try to eat something.” She knew none of them would be able to swallow anything down.

Bashinoir, supported by his wife, followed the priestess. He had never before been granted entry into the Temple quarters.

“Wait. Just a minute. I need to see something. Don't move. I'll be right back,” the man said.

Lil and the priestess watched him limp away.

Outside, the snowfall had grown into a blizzard that blocked the weak light of dusk from shining through. Bashinoir could barely see his hands in front of his face. The blood stains had already been covered by a new layer of snow. He noticed the depressions created where the bodies had fallen to the ground.
But where are the bodies now? Where could they have gone?
He groped his way through the storm and reached the nearest depression.

He knelt down, feeling around the snow with his bare hands. No, it wasn't an illusion. The body had disappeared.

Could it have been blown away by the wind? Impossible!

He searched around the stain, looking for marks or signs that it had been dragged away. But he didn't find a thing.

How much time had they spent in the Temple, standing around the sacred fire? If anyone had survived, there's no way they would have had time to drag away all of the cadavers. There weren't any footsteps, either.

He stood up, looking for another depression. Nothing, no bodies. Exhausted and in pain, he continued searching. He fell down to the ground, then pulled himself back up. He knew he was still losing blood. He stumbled towards the trees. He peered into the forest but couldn't make out a thing.

I need to go back to the Temple. Now.

He turned around and headed back. A few yards away from the entrance, he fell to his knees. He tried to get back up, but his legs no longer obeyed him.

“Come, Bashinoir,” the priestess whispered. Her silhouette blurred into the flurries swirling around in front of him. Then everything went black.

“Close the door and come help me,” the priestess Miril ordered Lil. Struggling with the man's weight, they carried him to a room adjacent to the entrance and stretched him out on his stomach over a skin that covered the floor. The priestess removed his boots and pants. Lil tried to hide how awkward she felt.

The wound was very deep. Miril left the room and came back with a small box. Once the wound was cleaned, she took out a needle and thread and started to stitch the skin back together. Then she covered her handiwork with a bandage.

“Listen, Lil. We won't be able to carry him to another room.” She told Lil where to find wood and the other skins. Lil left, coming back with what they needed a few moments later. They lit a fire in the hearth and created a bed with the remaining skins. Bashinoir's forehead was burning. “I'll go make him an infusion. Wait for me here.”

On her way back, as she passed by the entryway, a strong gust of wind slammed against the heavy wooden door, blowing it open. The storm invaded the foyer. The priestess stopped, stunned.

“What happened?” Lil asked, rushing over. She followed the direction of the priestess' gaze. Lil turned towards the open door. The two women stood as if they were waiting for someone or something to come in. “Help me close it,” Miril urged her.

Staring at the door panel opened to the right, the priestess moved forward. Lil paused for a few seconds, then, her eyes locked on the opening, imitated Miril with nervous, cautious steps, heading instead towards the left panel. As she pushed, she felt as if invisible hands on the other side of the panel were exerting a pressure against her.
That's impossible. I'm just tired.
And yet it seemed as if Miril was struggling as well.
We're women, this is the kind of thing you need a man's muscles for
. The focused, tenacious eyes of the priestess gave her the energy she needed to dig her heels in and push. Her body shook, her muscles screamed, but finally the panel yielded shut, just as Miril also succeeded in overpowering the other panel.

Could that wooden barrier keep them safe? Could it really protect them from the evil that had devastated their home on that ill-omened day?

Lil tried hard to convince herself that they were safe now.

Miril and Lil looked after Bashinoir until, exhausted, they collapsed onto the cushions arranged in front of the fire. His fever was under control. The wound had stopped bleeding. He was breathing normally.

On the Edge by Catherine Vale
Historical Lovecraft: Tales of Horror Through Time by Moreno-Garcia, Silvia, R. Stiles, Paula
The Problem of Slavery in the Age of Emancipation by Davis, David Brion
The Doll's House: DI Helen Grace 3 by M. J. Arlidge
Sassy Ever After: Bonnie Sass (Kindle Worlds Novella) by Erika Masten
Headless by Robert Thompson
Act Like You Know by Stephanie Perry Moore
Pretend Married (A Billionaire Love Story) by Nikki Wild
The Last Flight of the Argus by E. R. Torre
Bill Crider - Dan Rhodes 07 - Murder Most Fowl by Bill Crider