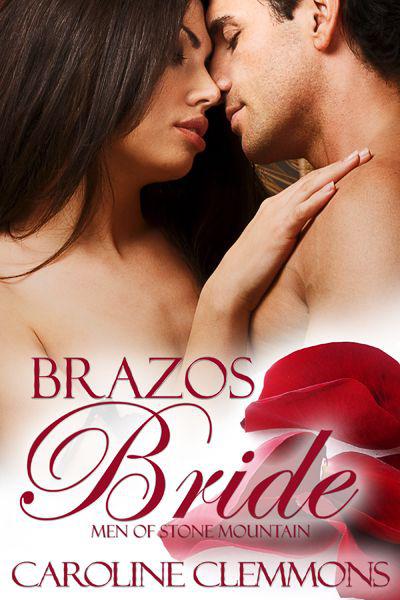 The Men of Stone Mountain Book One

All rights reserved. Without limiting the rights under copyright reserved above, no part of this publication may be reproduced, stored in or introduced into a retrieval system or transmitted in any form or by any means (electronic, mechanical, photocopying, recording, or otherwise) without the prior written permission of both the copyright owner and the above publisher of this book.

Names, characters, places, and incidents are either the product of the author’s imagination or are used fictitiously. Any resemblance to actual persons living or dead, businesses, events, or locales is purely coincidental.

Thanks to my real life hero, my husband, for his continued love and encouragement, and to my family and friends. Thanks to all those who helped critique this novel, including Mary Adair, Sandy Crowley, Geri Foster, Jeanmarie Hamilton, Ashley Kath-Bilsky, and the Mavens.

Reviews For Caroline Clemmons’ Other Books

“
From the start I absolutely loved this book, although the romance between Courtney and Derek remained on the sweet side when there was so much chemistry between them to be explored. The plot and dialogue were well developed with both Courtney and Derek being headstrong, yet knowing when enough was enough. What I liked so much about Courtney was her stubborn streak, and that she followed through with everything the will stipulated. And as for Derek, I adored how much help he gave Courtney, although at first he didn’t want to because she was taking what he thought should have been his.

In conclusion, Ms. Clemmons has penned a fabulous novel in this one with some great secondary characters such as Derek’s children and Courtney’s brother that helped bring more ambience to the story. And lastly, this is a story I’d definitely recommend because it illustrates that no amount of money in the world brings happiness and that love does. The Romance Studio,
5 Hearts
for
Home, Sweet Texas Home

“
Ms Caroline Clemmons has written a book that was so good it was hard to put down. She had my attention from the first page.” The Romance Studio,
5 Hearts
, for
The Texan’s Irish Bride.

“
Just when you thought a happily ever after was just around the corner, another corner appears...I want more!” Night Owl Reviews,
Top Pick
for
The Texan’s Irish Bride.

“
OUT OF THE BLUE is a beautifully written story. The extraordinary characters, descriptive setting and fast paced action/suspense made this a delightful, enjoyable read. The in-depth POV from the hero and heroine gave me a great insight on their emotions. This is the type of book that pulls you in and you just don't want to end, but leaves you with satisfied smile after the last page is read. A perfect mixture of witty dialogue, sensual love scenes, and the happily-ever-after ending, Caroline Clemmons pens a timeless tale that I could re-read over and over again and never tire of it!” Siren Book Reviews,
5 Siren Stones
for
Out Of The Blue.

Filled with lively characters and interesting plot twists,
The Most Unsuitable Wife,
is a delightful tale of one woman's courage in the Old West. Drake will keep you laughing. He expects a normal marriage, with the subservient little wife. He doesn't bargain on Pearl! Pearl is one independent, bossy little lady who does not let a husband stand in her way. Judith Rippelmeyer, The Word On Romance

One question whirled through Hope Montoya’s mind:
Who wants me dead?

She didn’t know the villain’s name, but she would not let him--or her--succeed. How long would it take to drive the poison from her body and recover? A few more days, weeks, months? Or was she fated to die as Doctor Ross predicted?

Fearing her pounding heart would burst through her chest or stop completely, Hope eased open her bedroom door and crept down the tiled hallway. In a weak fist, she clutched an empty pillowcase. Her feet bare to avoid creating noise, she padded toward the back stairs.

Moonlight shone through the window at the end of the corridor. Hope kept to the shadows. She’d heard no movement in the house for hours. The downstairs grandfather clock chimed two o’clock.

Could she do this? Perhaps she should have asked Ramona to accompany her. Summoning all her strength, she reasoned there was no need to disturb her friend at this hour. Besides, Ramona would probably think her plan foolish.

The poison had stolen Hope’s energy. But now she knew the cause for her weakness was not the vague wasting disease the doctor had diagnosed--the same cruel disease that had killed her mother just six months ago. Poor Mama. Surely she, too, had been poisoned.

Moonlight through the windows allowed Hope to make out familiar items in the room. She shoved a loaf of bread into the pillowcase. Next came dried apples, then a small wheel of cheese. She couldn’t take much or the cook and housekeeper would notice.

Seven
empanadas
remained in the pie safe from last night’s dinner. Surely they were untainted because they were for the household, but the pies would stain the pillowcase. Hope bit into one, and the spicy meat’s flavor burst in her mouth. She savored the
empanada
and grabbed another to nibble while she searched the storage pantry by touch for food that would not emit telltale odors. Her bag filled with enough for several days, Hope settled on a chair to rest.

Five days ago, she’d hidden a cache of food in her room and replaced her medicine with thinned syrup. Since then, the fog shrouding her mind cleared more with each day—proof she’d been correct about the poison. A portion of her strength returned while she evaded the killer’s trap. But how long could she escape an unknown murderer and hold on to her ranch and home?

Who could it be? Who gains from my death?

Unless someone had a vendetta against her family, Uncle Jorge and Aunt Sofia had the most reason to want her gone. With her death, they would gain one of the largest and most prosperous ranches in North Texas, Papa’s investments, cattle, her home, and cash. The thought sliced through her heart, whittled away the small amount of family affection she’d experienced.

Hope stood and the chair skidded a few inches on the tiles.

“
Que
? Is someone there?” called Annunciata, the elderly cook.

Oh, no! Fear set Hope’s body trembling and she almost fell back onto the chair. What would she do if the cook rose from her bed in the adjoining room and came into the kitchen?

Wait! Anger sparked through Hope and she exhaled.
This is
my
kitchen
,
my
house
. How has my life changed so that I’m forced to steal from my own provisions?

Bed ropes creaked, and soon the cook snored again. Like a wraith, Hope moved toward the stairs. By the time she reached her room, she was bent almost double from fatigue and the swirling nausea that plagued her.

She pushed aside the clothes in her armoire and released the catch that revealed the hidden compartment where she stored her food. When her cache was safe, she straightened the clothing and closed the doors.

Sinking to her knees, she retched into her chamber pot and replaced the lid. Without the strength to rise, she stretched out on the cool floor and closed her eyes, a voice echoing in her head:
Who would do this to me?

She came awake with someone shaking her gently. Her eyelids fluttered open. Ramona knelt beside her, concern in her dark brown eyes.

“
Pobre
Hope! What has happened to you,
amiga mia
?”

Tinges of predawn light showed through the French doors to the balcony. Surprised to find herself on the floor, Hope rose slowly.

“Let me help you to bed. Should I summon the doctor?”

Hope allowed her best friend to help her slide between the bed’s cool sheets. She sank into the pillows. “Not the doctor. Go ahead with your day, Ramona. I want to sleep a while longer.”

“A dose of your medicine may help.”

“I suppose.” Hope allowed her friend to give her a spoonful of the tonic. If Ramona thought it helped, what would be the harm? When Hope had poured out medicine the doctor had left fearing it might contain poison, she had been careful her substitution duplicated the color and consistency.

“I’ll get something to strengthen you. You’re so pale.”

“Thank you, but I couldn’t eat now. Please don’t trouble yourself. Lately, you spend all your time caring for me. Have your breakfast and enjoy the morning.”

“You know I am happy to do whatever I can to help you.” Ramona patted Hope’s hand. “I’ll sit with you until you feel well enough to rise. Shall I read to you?”

“Always you are kind to me, but now that I’ve had my tonic, a few hours of sleep will help.”

“As you wish, Hope.” With a worried look over her shoulder, Ramona slipped from the room and closed the door.

Hope tried to relax, to let sleep’s restorative powers claim her. Rest evaded her, and she prayed.

Determined to fight her unknown assailant, she could trust no one until she learned the killer’s identity.
No one, not even her closest friend
. But she was too weak to fight alone. Who could help her? Who
would
help her?

She needed a clever strategy to hold on to her ranch, her home, and her life. She vowed she’d escape this villain and see justice done. But how could she fight a faceless threat?

"This is my last chance." Micah Stone put the power of his back into scooping a shovel full of moist earth and tossing it aside. “Blast, it seems we’ve been digging forever. If we don’t hit groundwater soon, I’m finished for sure.”

Mired ankle deep in the muck of a dried up spring, Micah fought to keep his balance while he talked to his brothers, Zach and Joel. “Too far to keep hauling barrels of water from your land, Zach.”

Zach barely glanced up. “Even that isn't enough to keep you going much longer.”

They’d hit damp earth, but no water to speak of. Not enough to sate the thirst of his herd, that was for damn sure. Just enough to cling to the shovel and his boots and make digging that much harder.

Zach leaned on his shovel and stared at the dying cattle hugging the fence between them and water. “Damn Montoya to hell for getting himself killed before he let you cut a path to the river. If not for his orneriness and damned inconvenient death, we wouldn't be forced to scoop out your spring for a few buckets of water."

Some said Micah and his brothers were alike, but he couldn’t agree. Each was tall with gray eyes and black hair, but personalities made them very different. As youngest, Micah had grown up fast in the War and later worked in the Rangers with his brothers. He’d hated being on the move and the gunplay his former life required.

Micah had finished with killing, had vowed
never
to shoot at another human. Not after the incident that still haunted his nightmares. All he wanted was to be a peace-loving rancher. To turn this little spot in Texas into a haven, a place he could put down roots and someday start a family.

Zach was the tallest and best looking of the three Stone brothers. If ladies were nearby, they always smiled at Zach first. Not that he noticed. He had his own spread a few miles west with good grass and water, but not enough to support Micah’s herd along with Zach’s and Joel’s.