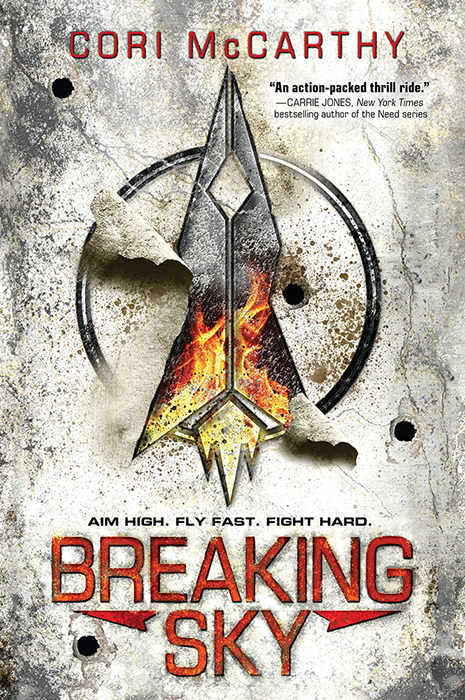 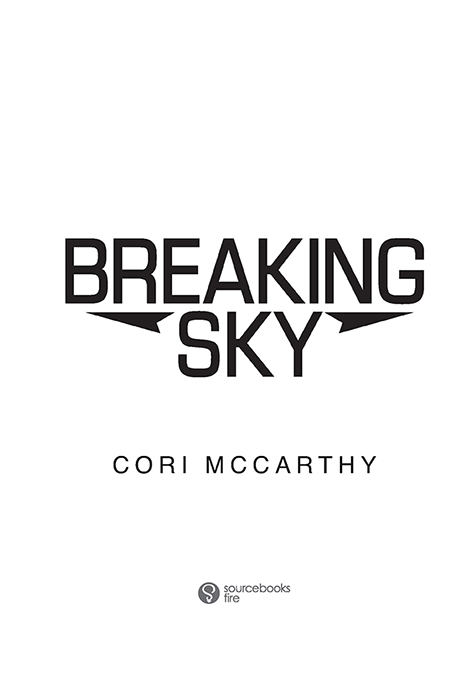 Summary: In the year 2048 Chase Harcourt, call sign “Nyx,” is one of only two pilots chosen to fly the experimental “Streaker” jets at the junior Air Force Academy, but few know the pain and loneliness of her past or the dark secret about her father, and as the world tilts toward war, Chase cracks open a military secret.

5. Knife Fight in a Phone Booth

26. Behind the Power Curve

42. Kick the Tires, Light the Fires

“There is an art, or rather, a knack to flying.

âDouglas Adams,
Life, the Universe and Everything

The lake held up a mirror to the sky's razor-blue, and Chase heard glass cracking in that color. An icy wind dried the blood on her chapped hands. She made a fist and her knuckles split.

She had killed him.

His body drained a red thread into the faint waves, blooming, fading, and pulling deeper into the water. She said his name in a whisper. Then a scream. She said it as if the word might let her keep him, but his name only echoed once over the lake and then died.

The government would take that name. Stamp it onto some monument, and he'd be nothing more than the first casualty of the war. The world war that had started moments ago.

All her senses were misfiring. Her jet was in three pieces and half-sunk against the shore. Chase stared at its crumpled body as the wind turned on her, pitching black smoke at her face. She squeezed her eyes, but the blue world stabbed inward.

Everything was fracturing, and it had been ever since she chased
Phoenix
out of the sky.

Speed turned her on.

The other cadets talked about the thrill of flying, but Chase didn't relate. Her love was more specific. She flew for the high-g press of ten times the weight of gravity. For the throttle thrust forward, the roar-rev of the engines, and then, the mach rush.

Chase was in the atmosphereâflying so fast she felt like solid muscle. Her thoughts were a dance of impulse as she backed off the speed and looked through the tempered glass canopy. The earth knelt before her like she was holding court over the whole damn planet.

“I don't suppose you see a gas station.” Pippin sat a few feet behind her, but his voice was closer, a direct link from his mask to her helmet's headphones. “Nearing bingo fuel, Nyx.”

“Give me two minutes.” Chase smelled a challenge. Or she imagined one. Anything to prolong the hop and do something
fun
. She pulled back on the stick, pointing the nose of her jet straight at the midday sun.

“Tower to Nyx. Come in, Nyx,” Pippin mocked. “My sense of mortality insists I ask if we're coming down anytime soon. As much as I wanted to be an astronaut when I was five,
Dragon
isn't a starship. Where are we going exactly?”

“Somewhere. Anywhere.” The sun blinded through her smoky visor, but she kept her eyes ahead. “Up.”

“Yes, I was going to point out that
somewhere
feels like
up
today. Sylph is already halfway home.”

“Good.” Chase gripped the throttle, and the leather of her gloves gripped back. “We don't need Sylph sniffing around for this.”

Moments scratched by, and Pippin cleared his throat. Twice.

“We got to get high, Pip. Real high. Otherwise, we'll smash into the ground before we can break the sound barrier in a downward spiral.”

Her reasons stacked. Because the training runs were tedious. Because Sylph, the pilot of the other experimental Streaker jet, had never and would never try such a stunt. And because Chase was Nyx, and with that title came certain wild expectations.

And the cherry on top? Because Chase needed to prove she
could
do it.

When they were nearly thirty miles up, about to leave the stratosphere, she turned the jet toward the curve of the earth's surface and let them freefall. Gravity took hold, and she steeled herself to punch through it.

The engine howl took over. They blazed at the blue-on-blue planet, the green smatterings coming into focus. She felt the mach tuck, the air trying to slow her down, just as the sound barrier broke.

The sonic
boom
was lost behind them, but a pearly halo erupted in their wake.

Chase Harcourt, call sign “Nyx,” had broken the speed of sound at absolute zero sink rate. The other cadets could put that on her headstone.

Speaking of, she was about to die.

The earth was growing larger fast.

Chase reeled in the speed, but the jet resisted. Pippin panic-hummed “Ode to Joy,” and Chase's arm muscles shook. Land filled the cockpit glass. They were going to slam into it. Houses came into focus.

Chase caught an updraft at the last second. They soared into the sky, leveling above the blush of wispy clouds. Pippin ripped off his mask to gasp, while Chase's eyes stuck a little too wide. Far below, the humped back of South America led to the arm of Panama, rising fist-up through the Caribbean Sea.

Chase let go of the throttle slowly, her fingers stiff. “Christ. That was fun.”

A flash of shining silver cut Pippin off. Cut everything off.
Dragon
flipped. Chase fought to frame the horizon, but what she saw next iced her blood.

A Streaker. A twin to the prototype she sat in.

It was like walking by a mirror she didn't know existed. It made her jump, defensively jinking her wings. The other pilot looked her way right before jet-washing
Dragon
. Chase and Pippin spun through the fiery engine wake. Long seconds passed before she won the stick back and blinked the red out of her vision. By the time
Dragon
had stabilized, nothing but the other Streaker's contrail remained. A white highway.

Chase exploded after it.

“Time for a conference call, Nyx.” Pippin's tight voice belied his mocking. “What in the blazes was that?”

“Sylph's almost home. You said it yourself. That was someone else.”

Pippin didn't bother to agree. He was into his controls in a desperate way. After all, he was her RIO, her radar intercept officer. The sky was his ingrained map, and it was his job to make sure the air was clear around them, like a human satellite. “That bird has no signal,” he finally said, a hint of wonder in his voice. “How could it have no signal?”

“No signal
and
it's headed for U.S. soil.” Chase's pulse picked up. Her muscles went tight as she leaned into the pursuit. This wasn't like the stunt she'd just pulled. This was what she was trained for, and she left safe speeds way behind.

“What are you going to do if we catch it? We're not armed, Nyx.”

“Track it. See where it lands.”
Make
sure
it
isn't a sneaking spy from China,
she added to herself.

Chase grinned so fiercely from the pressure that she felt crazed. “There. You see him?”

Far below, metal winked over the serpentine glisten of the Mississippi. She pulled lower, closer to the blue-ferocity of the enginesâdual engines that reached under each narrow wing and married together at the back like the infinity symbol. Just like
Dragon
's engines.

Chase dove under the jet. God, it was
blinding
fast. The pilot tilted into her space, their wings nearly kissing. She'd never gotten remotely this close to Sylph's bird in the airâ¦it made her laugh out loud and test how much closer she could get. The other pilot's bloodred helmet shot a look her way, and she had the funniest feeling
he
was laughing too.

“Pip, look at that helmetâ”

Dragon
's emergency low fuel alarm pierced the cockpit. She slapped at the control board to turn it off, but her speed died as the engines defaulted to reserve levels. The other jet broke east toward the indigo muscles of the Great Lakes.

Chase had just enough time to read the sharp military stenciling along its side: