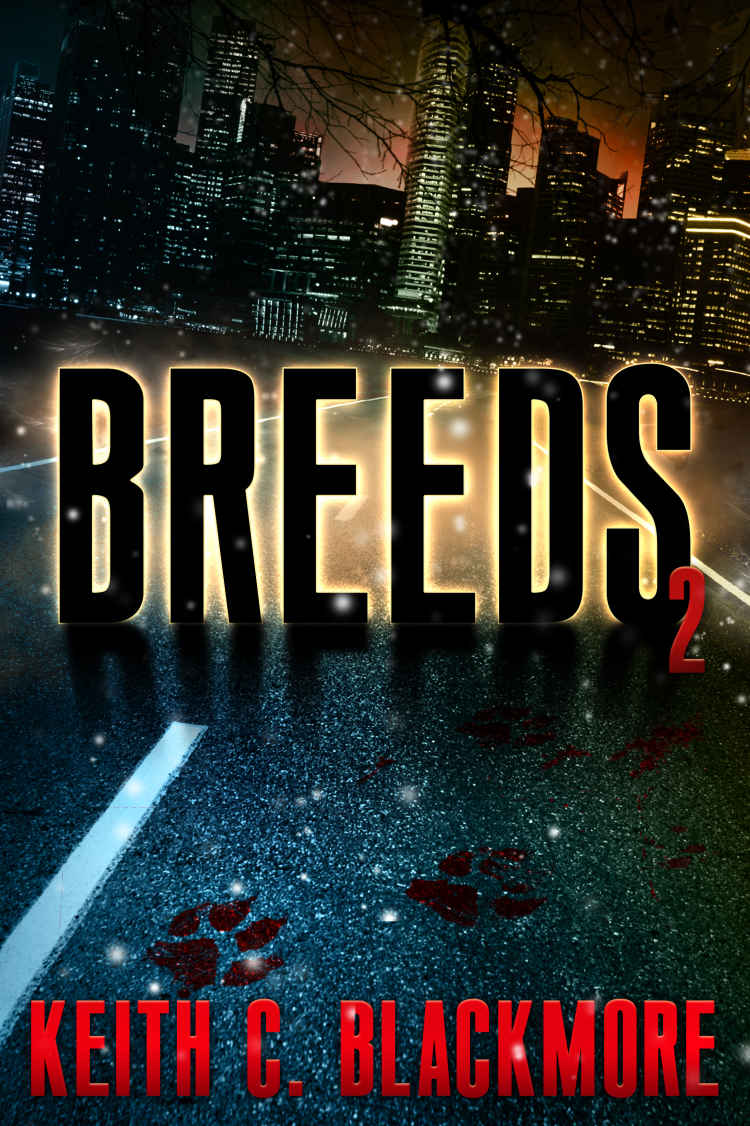 This book is a work of fiction. The names, characters, places, and incidents are products of the writer’s imagination or have been used fictitiously and are not to be construed as real. Any resemblance to persons, living or dead, actual events, or organizations is entirely coincidental.

If this is your first book of mine, I thought I should catch you before you spend your cash on this sequel to
BREEDS
. Just wanted to let you know––bad things happen in this book. There’s violence, swearing, and probably a little more gore than you might care for. The characters and situations herein aren’t real, of course (after all, it’s fiction), but if you’re a sensitive horror reader, you probably won’t like what happens in the pages that follow. It’s not my intention to upset readers.

For those reasons, save your cash and do not buy this book.

For some strange reason, Kirk didn’t want to make the call.

Alone in one of Ross Kelly’s spare bedrooms, he stared at the crude splints fixed to his broken legs. A brown telephone with a cord resembling a mutated strand of DNA lay in his lap. Kirk placed a hand on the receiver and took a breath.

Punched in the number. Waited.

It rang, jingling in that great emptiness, summoning forces best left undisturbed. Kirk waited, every second begging him to break the connection.

An automated voice suddenly answered. “We’ll get back to you.”

Kirk hung up. Waited again. The elders employed techs on their side. Communications sorcerers who could secure lines and scramble conversations. Part of the wait, but only from their end.

When the phone in his lap rang, he grabbed the receiver.

“What happened?” whispered a voice.

“What kind of problems?” the voice asked with a dangerous note of curiosity.

Kirk took a breath. His report took over ten minutes, and the presence on the other end of the connection sucked up every sick syllable. Kirk could sense a growing unease on the other side, but he plunged forward, omitting nothing, purging himself.

“Dogs,” the voice said after Kirk had finished.

“Yeah,” the Halifax warden confirmed, waiting for a ridiculing blast, a warning reprimand.
Something
.

“And none of them survived?”

“Why didn’t you kill the man called Ross?”

That one question reeked of suspicion. It paralyzed Kirk. Why didn’t he kill Ross? It would have been the easy thing to do.

“We needed him,” the voice repeated neutrally.

“We need a new warden over here. The island doesn’t have anyone now. Morris and I can’t be expected to watch over it anymore.”

“So you arbitrarily selected a man… an unbirthed man… for a duty that would ordinarily be assigned to an accepted and proven individual?”

A weary Kirk winced into the receiver, feeling hammers at his temples. At the time, he’d believed he had it all thought out. He didn’t want to kill another innocent bystander in that one-day war. He had struggled with the possibility for so long––actually
dreaded
making such a decision. He couldn’t kill an innocent person. Kirk would have become the monster he swore he wasn’t, the monster he’d rejected for years but recently questioned. He believed he’d taken the high road, reasoned that the island needed a new warden familiar with the territory, and convinced himself that the elders would see the logic behind sparing Ross.

The voice on the other end made Kirk’s reasoning sound like amateur hour.

The silence was the worst.

“How did you manage to heal so quickly?” the voice probed, changing topics.

A fearful chill bloomed within Kirk’s chest. “I… ate the
weres
.”

A menacing silence followed that admission.

Kirk stared off at the eggshell white of the wall and licked a tooth. “Yeah.”

The voice said nothing.

This non-response terrified Kirk. “It was
war
, man,” he blurted. “There was nothing else I could do. I was facing a pack of those fuckers and if I hadn’t chowed down on one of them, the others would’ve killed me. And the
weres
would’ve ripped the throat out of this place. The only way you would’ve known—” Kirk stopped short. “I’m… I’m fine now. Don’t worry. I feel fine. I’m not going to start feeding on
weres
any time soon.”

The grim silence informed him that the joke was not appreciated.

Nothing on the other end.

Kirk stared at the receiver, dubious of the curtness in those last few words. He sighed.
Great
. Just wonderful. The elders probably thought he was a goddamned cannibal, given the definite weird vibe from the conversation. He hung his head between his shoulder blades and massaged the back of his neck. The unnerving conversation replayed itself in his head. He’d told the truth and knew he couldn’t have done anything differently. So why did he feel as if he’d just damned himself?

Dark thoughts seeped into his mind. He settled back on the bed and regarded his mending legs. He never should have answered his phone back in Halifax two days ago.

He nearly hurled the phone across the room when it rang loudly in his lap.

He snatched up the receiver. “Hello?”

“Put Morris on.” The same voice as before.

A loud thumping grew louder in the hallway, and Moses Morris opened the door. Mucus filled the exposed portholes of his raw nasal cavities where Brutus had taken off his nose. Morris was also missing a hand from that fight, and looked as if a truck had run him down before dragging his ass halfway to Clarenville. Kirk handed the phone over and shooed him out of the room. Morris frowned and backed out, the phone cord skittering along the linoleum. He fumbled with closing the door, grunted in exasperation, and opened it again to yank the cord through. He scowled at Kirk and disappeared with a door slam.

Kirk sat back in the bed, eyes narrowed. He pawed at his beard and waited. After a few minutes, he heard Morris grunt affirmatives.

Seconds later, the door opened and the Pictou warden tossed the telephone into Kirk’s lap.

“Probably the same as you. Can I go now?”

“You, ah, get any weird vibes off that call?”

That disturbed Kirk. “What do you think that means?”

Morris shrugged. “That he was pissed. I dunno. I’m in pain here.”

“Yeah, but… I got a bad feeling about this.”

“Says the guy who turned a civvie,” Morris pointed out, making Kirk squirm all the more. “Whatever. It’s your banana boat. Not mine.”

“We decided on Ross together.”

“You put it out there and I agreed, yeah, but it wasn’t my idea. I just want to get out of here.”

Kirk shook his head in disbelief, color rising in his bearded cheeks. “You bastard.”

As an answer, Morris closed the door.

Not a second later, Kirk heard him swear on the lengthy telephone cord.

Clouds ruled the late October sky, blotting out a sun that Morris hadn’t seen for most of the week. He leaned back in a chair on his cabin porch, his boots fixed on the railing, dark eyes staring from underneath a thick head of hair. A heavy black sweater covered his torso as well as an open hunting jacket of plaid blue, something which he only wore around his front door. Morris pinched at his new nose, feeling the contours of the fresh cartilage, and then scratched at a beard wired with silver. He relaxed with a mug of coffee in hand and listened to squawking blue jays. The morning was tech-free and simple, just the way he liked them. The view wasn’t much, but he didn’t mind. The privacy was priceless, and the single biggest reason he lived in the countryside. The clean air purified him, and the clear nights were every bit as spectacular as a summer’s firework show. Out here, it was just him. Not another neighbor within a thirty-kilometer radius.

If there was, he would’ve known it.

Morris sipped his coffee. Three sugars and a generous dollop of milk. Some would say he polluted the drink. He’d tell them to fuck off––without the sugar.

A thick fence of birch and fir ringed his property. Bright leaves drizzled his lawn. Morris intended to rake them later that day, whisk them into a beach rock fire pit, and burn the lot. In his mind, October was the finest month. It was the most colorful, the most pleasantly fragrant, and the most comfortable time of year.

Morris was all about relaxing.

The September Harvest Moon had passed without trouble in his part of the woods, and he hadn’t heard a thing from Halifax, which was also good. As much as Morris enjoyed life as a
were
, he didn’t like dealing with others of his kind. Didn’t like the posturing, the attitude, or the arrogance. He rarely heard from Douglas Kirk down in the city, and that was a good thing.

Christ and twelve monkeys, that had been a clusterfuck of epic proportions. The closest Morris had ever come to dying in all of his eighty-five years on the planet. The horrors he and Kirk had survived brought a smile to his bearded jowls these days, but the smile always frosted over when he really got down to remembering what had happened over there.

What had happened and what he’d done.

Steam smoked from Morris’s coffee, disturbed by the faintest of breezes. He switched the mug to his other hand so he could rub at his left shoulder. A line of scar tissue ran under his fingers like a profane line of braille. Walt Borland, the ancient bastard, had stabbed a silver blade there and sunk it deep, as if he’d been staking a claim in Morris’s flesh. And that had been only the beginning. The episodes with Borland and the
were
-breed called Brutus had been two of the most damaging claw fights he’d ever participated in. He’d sustained wounds and forced speedy changes upon himself which, at the time, he knew, just
knew
, he’d have to endure for the rest of his days.

Silver had cut his shoulder.
Weres
abhorred the lethal substance, the only element known to inhibit the regenerative ability of a werewolf. Wounds made by silver, be it bullet or blade, never healed. Morris had heard a few stories concerning old
weres
wearing shirts to hide baseball-sized holes in their torsos, using canes to walk on legs missing whole sections of the femur.

War Games (Alien Instincts) by Lore, Cynthia
Steadfast by Mercedes Lackey
Heart Melter by Sophia Knightly
Sohlberg and the Gift by Jens Amundsen
Jim Morrison's Adventures in the Afterlife by Mick Farren
Taking the Fall by W. Ferraro
Chosen (Part I) by Clark, Emma
Religious Love by Horton, T.P.
Bound By Fate: A Novel of the Strong by Amy Knickerbocker
Broken Heart 7.5 - The Adventures of Zombie Larry by Michele Bardsley