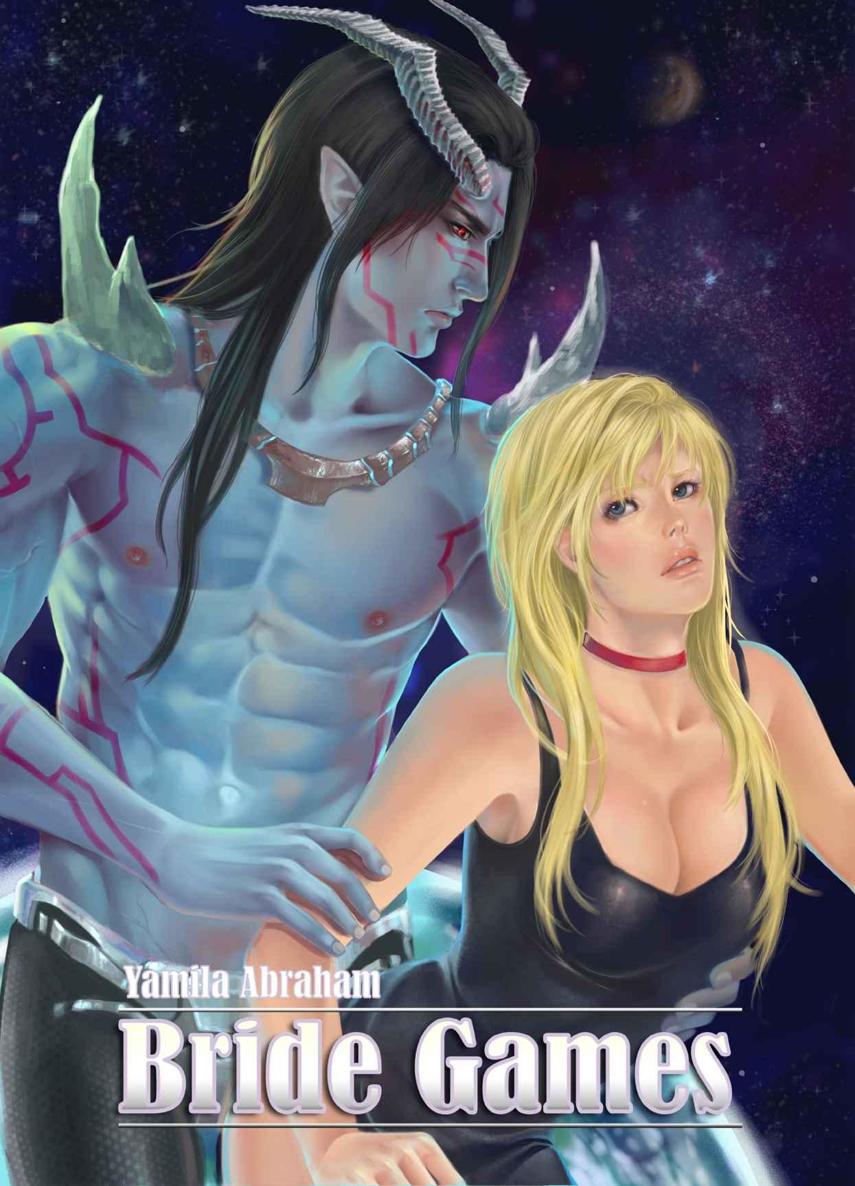 Cover by Archie the Redcat, Edited by Michelle Henson

Piracy has absolutely devastated my ability to make a living.

I beg you to please not post this or
any of my works
online.

Thanks so much to everyone who has supporting me with a legal purchase.

Viceroy Lysanter exited his palace bedroom and headed for the broad stairs that led down to the ministerial offices.

He wore the simplest version of his uniform:

His slave Hester, a six-limbed Dornovonian, scampered from a side corridor to greet him.

“What’s up first for today?”

The organizer is waiting for you.”

Lysanter felt a stitch in his diaphragm.

He expelled a deep breath and entered his office.

The games organizer rose to greet him.

The man was a Dak-Hiliah, the same as Lysanter, with blue skin decorated by noble red markings.

He had less of Lysanter’s muscular bulk since his position did not require the measure of intimidation Lysanter’s traditionally did.

“Minister Danfet,” Lysanter said, simultaneously clearing his throat and dropping into his chair behind a massive polished stone desk.

The games are set to begin tomorrow.”

Lysanter picked up his tablet and scrolled through a list of headlines in the Dornovonian language.

“I was tolerant, but now I’m annoyed.

Why have you come to see me?”

There’s even a new commerce area at the front entrance.

You should come see.”

This got him too look up from his tablet.

Having the arena useful again would be a boon to the Dornovonians.

“I’ll have a tour after these…games.”

“They’re not so terrible, are they?”

Lysanter tapped a headline on his tablet while attempting to maintain an even tone.

“You’re making sport out of a deplorable situation.”

He crossed his legs.

“We’re giving self-destructive slaves a way to become resigned to their fates.”

“What if they win?

Or am I to assume the game is rigged in our favor.”

Our engineers designed the games to be difficult but achievable.

A rigged game would defeat the purpose.

The women need to know they had a fair chance at freedom.”

“Are you really going to let them free?”

Danfet looked affronted by the insinuation.

“That solves the problem they’re causing in its own way.

We get to remove these rebellious slaves from the breeding colony so they can no longer stir up trouble.”

“Remove them to where?

The wilds of planet Earth?”

The forests these slaves keep running to are practically devoid of resources.”

Danfet threw up his hands.

“But that’s what they choose.

He grimaced and picked up his tablet again.

“I want nothing to do with this.

I’ve a great deal of work to see to.”

“Actually, Lord Lysanter, there’s a matter I need to broach with you.”

He made a low grumble.

Danfet pulled a tablet out of the satchel he’d set on the floor.

He thumbed through it quickly.

“The matter of Lenora Winquist.”

He set the tablet before Lysanter.

On the screen was the picture of a female human well past the minimum breeding age.

She had thick tendrils of blonde hair and bangs splayed over part of her sun-ravaged face.

The woman’s youth was markedly visible from her grey, fawn-like eyes.

Lysanter was struck by the beauty of the woman—this, despite how her jaw was set hard in defiance.

Her grey eyes were perhaps once blue.

Lysanter saw in them a level of hardship she could have likely spared herself.

He found himself touched by this.

Indeed, all his annoyance at the games organizer evaporated.

He was mesmerized by the story in the woman’s face.

“They always catch us off guard with their beauty.

You’d think one of our rare Dak-Hiliah females are as beautiful as it can get, then you see a human.”

“Meaning she agreed to take part in the games but doesn’t have a husband in line to claim her if she loses.”

He managed to hide the irritating glimmer of hope that swelled in his chest.

The viceroy of Dornovonia was not so easily manipulated.

Danfet made the patient smile again, but this time struggled to produce it.

“Lord Lysanter, why haven’t you taken a human wife?

Your status gave you the right to marry and breed during the first two human collections.”

Danfet risked having his wretched games canceled and getting exiled from Dornovonia for daring to pry into his personal life.

The small man was too confident in his audacity, however.

He was withholding something—something which no doubt allowed him the privilege of such boldness.

He leaned back and tipped up his nose.

I have no interest in sharing my life with an unwilling slave who despises me.”

You’re compassionate, just like your predecessor Lord Elentinus was.

That’s why the High Council picked you to govern this obedient slave world.

They knew you wouldn’t be cruel to them.”

Lysanter resumed glaring at him and waited.

“And that’s why…that’s why I think you’d be the perfect mate to this Lenora human.

She needs someone to convince her that we’re not monsters.

Someone to teach her that she doesn’t have to fight us anymore.

It’s going to take a compassionate man like you to get through to her.”

So I’ll be this woman’s hero and savior, and we’ll live happily from then, right?

It never works that way in reality.

This woman doesn’t want my help.

She doesn’t want a damned thing to do with any of us.”

“But she’s still overcoming her programming.”

“She was programmed to fruitlessly resist us during the war, and now that it’s over she can’t make herself stop resisting.

She’s obsessed with getting free, just as they taught her.

The slave colony on Earth is a most civilized place.

They have near complete autonomy, yet she still thinks it’s better to live like an animal in the woods.

If she hasn’t escaped then she’s plotting to, and last time another girl even ran away with her.

We don’t have the manpower to police this girl.

The colony is meant to have minimal interference.

We want happy slaves willingly building up the human population.

She can’t go back there.

She has to be married out or abandoned.”

Lysanter picked up the tablet with the woman’s picture again.

“It doesn’t look like she managed well in the woods.”

The last time she escaped she ran so far with the other slave it took ages to find them.

Lenora was almost dead with some Earth ailment caused by the cold.”

“That’s her prize if she wins?

To go back to the woods?”

He pushed the tablet away.

“You’re asking me to marry someone who hates us even more than the average Earthling.”

She knows she’ll have to resign herself to the situation if she loses.”

“I’m appealing to your mercy.

Give her a chance to survive with us rather than dying in her resistance of us.

If…if it can’t work out then divorce her.

At least someone should try to save her.

Women are so few and precious.

Shouldn’t every one of them be protected?”

“She could still win at these games.

At least according to you.”

“I’ve set it up so the contestants can spend time with their intended husbands between each round.

My hope is that after she gets to know you she’ll want to lose.

I could have assigned her to hundreds of eligible Dak-Hiliah noblemen.

I saved her for you.”

“Why would you ever do something so stupid?”

“I have reason to believe it’s your fate to be with her.”

This made him tip back his head with the brief laughter.

“I’m not going to say any more about that.”

Lysanter felt a crackle of electricity race down his spine.

Once again he suspected Danfet of having some advantage over him.

“I’m going to ask you, just once and never again, will you be Lenora Winquist’s husband if she loses in the games?”

Danfet was staring at him with a level of determination that showed he’d be true to his word.

He plucked up the tablet again.

His intention was to mull the prospect seriously.

This wasn’t a trifling commitment, but marriage, something he’d sworn not to do with an unwilling bride.

Could she be made willing?

The words were coming out before he’d considered it in full.

Had he really said it?

For a moment he felt as if he’d lost control of himself.

He was never so reckless.

Something compelled him to agree.

Those gray eyes…eyes that had never known happiness.

The Druid Pakpo will be so pleased!”

Lysanter felt a tightening in his middle.