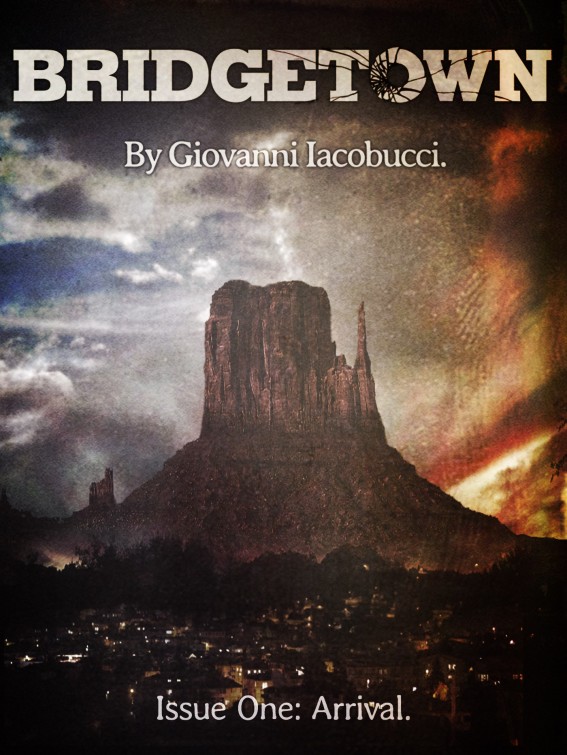 A Novel in Three Issues.

Visit Bridgetown on the web at
bridgetown.modmythmedia.com

This work is provided under the Creative Commons
Attribution-NonCommercial 4.0 International (CC BY-NC 4.0) license.
That means you are free to:

Share
— copy and redistribute the material in
any medium or format

Adapt
— remix, transform, and build upon the
material

Attribution
— You must give appropriate
credit, provide a link to the license, and indicate if changes were
made. You may do so in any reasonable manner, but not in any way
that suggests the licensor endorses you or your use.

NonCommercial
— You may not use the material
for commercial purposes.

No additional restrictions
— You may not apply
legal terms or technological measures that legally restrict others
from doing anything the license permits.

Some of the
music I listened to while writing this issue:

There Will Be Blood
by Jonny Greenwood

3:10 to Yuma
by Marco Beltrami

Picture a vast expanse of dry earth. There is no
exotic romance here, no ancient Arab empire buried under hot dunes.
Rather, there is only the scrubby chaparral of the Los Angeles
foothills, with soil so hard it resists the incision of a shovel.
Imagine this place long before the arrival of concrete aqueducts
and eight-lane asphalt highways, when the land beneath was still
pregnant with undiscovered oil.

A man hobbles into our view now, listless.
He's bleeding out. His white tunic is torn open, soaked through
with perspiration and stained red with his own blood. He clutches a
dark canvas sack with as much desperation as he clings to his
fading soul. At last he collapses, taking in a mouthful of barren
dust through cracked lips. His stolen prize is still in his
hand.

He does not emit so much as a whimper as his
organs begin to shut down. He only curses his god and the
accomplices who abandoned him. Strangely, he feels no ill will
towards the man who put the bullet into his belly, for he had only
been playing out his part in the drama that unfolds on this
unforgiving stage.

The earth continues its dance around the sun.
In time, all that remains of the man is a skeleton in sun-bleached
rags, its bones picked clean. The prize for which the man died is
gone now, no doubt claimed by some more fortunate passer-by.

Sagebrush grows up, up through the hollow
rib cage, until at last the vegetation is tall enough to cover the
body fully. An El Nino year brings with it flash floods that fill
this basin with mud, and in this way, the desert finally grants him
a proper burial, its downpour standing in for tears. Now, he is
truly forgotten by this world.

This scrubland comes to be called Pasadena,
for its original Tongva name has become as every bit as buried as
the man. The oil is at last sucked from its reserves. A road is
paved, and the man's gravesite is marked by a sign that promises
new housing and new possibilities for the families of GIs returning
home from the honorable war. A house is erected. Where the bandit's
remains were once visible, a patch of crabgrass is planted in a
grid. The lawn is roughly—probably unintentionally—fit to the
Golden Ratio.

A Chevrolet Nomad the color of Pepto-Bismol
is parked in front of this single-story dwelling. A little girl in
a blue dress plays in the front yard. Two yards beneath her, a
human skull bears silent testament to the history of this
place.

The girl becomes a young woman, and begins to
take an interest in boys and music. Her parents find their first
gray hairs in the bathroom mirror, and their thoughts turn to how
things used to be better. In the driveway, the Nomad's
future-forward tailfins are replaced with the pragmatic lines of a
Cadillac Deville in Sudan Beige.

It was August 15th, 1970, when
eighteen-year-old Susanna Tanner planted her flag in the unknowable
future.

"I'm going and you have no say in it! I'm an
independent woman!"

Her father leaned against a doorframe in
their home's front hall, wearing a look of sublime parental
resignation.

Susanna had seen this face on him twice
before:

The first was when, at the age of nine, she
announced she was quitting Girl Scouts. This she demonstrated with
a dramatic stomp upon her green sash.

The second time had been at the start of
summer, when she told her father she was skipping prom to hang out
with Jesse Cole, a twenty-something musician on the local rock
circuit with a following that was, in her words, "cult."

Susanna's father was beside himself at this
latest incursion in her youth-rebellion blitzkrieg. He shrugged his
shoulders and said, "You know what this means."

"I know," she replied. Her tone was almost
apologetic. "Don't worry, I already packed my things."

Her father pursed his lips
and nodded. Then he turned and walked away. Susanna listened to the
heels of the loafers he refused to take off—even
indoors—
clack-clack
their way into nothingness.

She turned back into her
bedroom. Its walls were pink, a color she'd never particularly
cared for, even as a child. Her bed was too short by several inches
for her to really stretch out, which was odd, since weren't these
things pretty much standardized? Standing there amid the relics of
her childhood, she felt like she had been living in a dollhouse her
whole life. These weren't
her
things; these were things that had been
prescribed to her, beginning at birth. What she needed to do was
make her own destiny.

So she grabbed her suitcase off the bed. It
was round, glossy red. She had purchased it at Macy's the year
before, when she went to Hawaii for a week with Anjelica and
Tricia. And then she left the room, shutting the door behind her as
she went.

Susanna was fine with her father's ultimatum.
She really was serious about moving out of her parents' house. But
she didn't even bother to say goodbye to her mom. After all, she'd
patch things up with her parents once she was done couch surfing;
once she had a roommate, and her own normal-sized bed, and a
bookshelf full of Ginsberg and Updike and authors she actually
cared about. And then things would be better between them than they
had been in a long time. Frictionless. She'd be back in their good
graces by Thanksgiving, and she'd finally be happy with her station
in life. This was a calculated, surgical operation on Susanna's
part, like cutting a deep-situated tumor from a cancer patient's
abdomen. It was medically necessary.

She passed her father's study on her way out
the back door—the better to avoid her mother. For a moment, she
felt a strange twinge of disappointment that he didn't come running
after her.

Mostly, though, she felt relief.

When she reached the backyard, her eyes took
a moment to adjust to the overwhelming brilliance of the midsummer
noontime sun. Already, she could hear the knocking idle of Jesse
Cole's 4x4.

She unlatched the side gate of their entirely
predictable white picket fence, holding her breath as she hurried
past trashcans ripe with the detritus of domestic living. She
proceeded towards the front of the house.

And there he was, waiting for her:

As for Jesse the man, he was all long hair
and wiry features. He looked every bit a contemporary of the Bob
Dylans and John Lennons of the world—though her father might've
gone with Charlie Manson.

He smiled at her from the driver's seat as
she approached, revealing one chipped front tooth. She adored his
broken smile. It gave him a real-world charm. And she liked that
the sight of the two of them together was a bit offbeat. As a
child, she'd always been the girl that teachers and strangers
described as "nice," "smart," or "standup." Jesse was a
twenty-six-year-old rock-and-roller with a rap sheet just long
enough to make him interesting, without threatening her idyll of
danger-at-a-distance intrigue.

In one Olympian hurdle,
Susanna sent her traveler case flying up into the rear of the old
Willys Jeep. She hoisted herself up onto its utilitarian passenger
seat. The roofless car's metal interior was scorching in the summer
heat, and the canvas burned beneath her white clamdiggers. No
matter—it might have been hot, but at least she was
cool
.

Immediately, she threw her arms around Jesse
and kissed him, deeply, possessively. Jesse pushed against her,
embracing her body within a kind of bear hug. Susanna gave in to
his control, imagining the scowling eyes watching them both now
from behind the peeled curtains of her father's study.

Just as quickly as they'd started up, Jesse
pulled away. As he always did, a few short words away from
completing their unspoken sentence. She knew why he did it. She
knew he enjoyed the power. And she was more than happy to play the
part, knowing full well who really held the power.

Jesse put the Jeep into first gear and pushed
the pedal to the floor. The Jeep did its best to obey. In a haze of
fumes, they roared off to...wherever it was they were going.
Susanna hadn't really been listening to Jesse's words when he asked
her to come along with him. It didn't matter.

The Jeep was in third gear before she made
note of their silent companion in the back seat. He was diligently
holding Susanna's red carryall, smiling at her through the
rear-view mirror. Susanna had always thought the man now sitting in
the back of the Jeep looked a bit like a bespectacled piggy bank.
She felt a little guilty about this, and embarrassed now for her
earlier make-out show, she flashed a cheery smile at Jesse's
bigger, older brother—Wayne.

Simon and Garfunkle's mellow vocals played
out through crackling radio speakers, riding on an FM signal that
was receding ever farther behind them. Susanna leaned back and felt
the sun's rays pierce her skin. She imagined each cell's excess
oils drying up. Daily sun exposure was a nigh-religious
purification ritual for her—the teenage menace of pimples was a
not-so-distant memory.

Desert scenery played on a loop around the
Jeep like a Hanna-Barbera cartoon. She saw the same black-and-white
"CA-14" sign over and over again; all the hills looked the same;
and the yellow line demarcating the two-lane blacktop seemed to ebb
and weave beside them like a pulsating, analog sine wave.

That sun, the one over her head right now,
the same one she could feel radiating through her body, had been
feeding this world without pause for a span of time greater than
any she could conceive.

All that she knew was borne of it, and would
eventually be consumed by it.

She wondered what had made her think of that.
But she didn't wonder for very long. She nestled her head between
her shoulder and the thinly padded back of the seat in an
unsuccessful attempt to find a good place to rest her head. It
bobbed loosely as the Jeep rocked along the road.

She let her thoughts drift to a place of
abstraction, where words were no longer adequate to contain their
meaning.