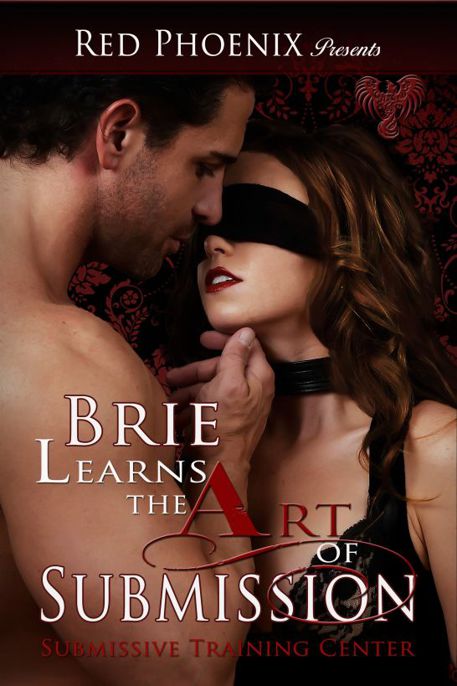 Brie Learns the Art of
Submission

This ebook is licensed
for your personal enjoyment only. Your support and respect for the
property of this author is greatly appreciated.

This book is a work of
fiction and any resemblance to persons, living or dead, or places,
events or locales is purely coincidental.

Disclaimer: The
material in this book is for mature audiences only and contains
graphic sexual content. It is intended only for those
age
d
18 and
older.

Brie Learns Her Power as a Submissive

Brie Surrenders
to His
Will

Brie Bows to Her Master

Brianna put the money in the register and
slammed it closed. It was another dull day in the tiny tobacco
shop. This was so
not
what she wanted for her life. She had
gone to college and studied for four long years to get her degree
in film, only to find that it would open no doors for her here in
Hollywood. It was all about who you knew or who your daddy was.
Four years and thousands in debt—and for what? To work full-time in
this little tobacco shop day after day, making her homemade movies
on the weekends and hoping for a break.
Pathetic.

She adjusted her ponytail. It was one of
those mornings when her curly brown hair refused to cooperate.
Luckily for Brie, she looked good in a ponytail. Well, at least
that was what she told herself.

“Brie, don’t forget to put out the new
cigarettes. Several people complained about having to wait while we
searched for their brand,” Mr. Reynolds called out from the back of
the shop.

It was technically Jeff’s job, but the lazy
shit never did anything. All the grunt work fell on Brie’s
shoulders because she was reliable. What a horrible thing to be.
Being labeled as ‘the reliable one’ meant that she was stuck doing
everyone else’s job. Brie didn’t hold it against her boss, Mr.
Reynolds, though. He wasn’t responsible for hiring the staff. The
owner did that, and he mainly hired within his family (which Brie
was not). To his credit, Mr. Reynolds gave her a nice raise every
time her evaluation came up. Still, she always got stuck taking up
the slack, and it wasn’t fair.
Not in the least!

Brie bent down and began opening the boxes
to shelve the cigarettes. The sound of a man clearing his throat
caused her to look up.

She was startled to see a strikingly
handsome couple standing before her. The woman had long, red hair
and the most tight-fitting leather outfit Brie had ever seen.
Somehow, the lady didn’t look cheap in the hot little outfit. No,
this woman oozed confidence and sex appeal. Very classy.

The man, however, made her tremble a little.
His intense gaze seemed to go right through Brie. He was tall and
incredibly attractive, with short, brown hair and chiseled facial
features. However, it was those eyes that commanded her
attention.

“Miss, could I have a pack of Treasurer
Cigarettes?”

Brie smiled apologetically. She knew they
were some of the most expensive cigarettes made. “I’m sorry. We
don’t carry those here.” The cigarettes were almost forty bucks a
pack and the little tobacco shop did not serve that type of
clientele.

The gentleman looked around and nodded.
“Satisfy my curiosity and tell me what brand is in the box over
there.”

He pointed to a box just out of her reach.
Brie bent down and opened it up. She chuckled when she saw what was
inside. “Sorry, these are just Marlboro Lights.” She stood up and
turned to face him. Brie caught him staring at her butt and
blanched. No one ever looked at her that way. It was embarrassing.
Well, somewhat embarrassing. Okay, it was kind of cool…but how dare
he?!

The man raised an eyebrow and smiled
slightly. It was exhilarating.

“Do you have any Fantasia Cigarettes?” the
stunning redhead asked.

Brie grinned. “Now
those
we do
carry.” She stood on tiptoe to get a pack off the top shelf and
handed it to the woman. “Is that all?”

“Do you like it here?” the man asked in a
low, alluring voice that sent chills through her.

Why was he asking?

“Not exactly,” she answered, but her heart
started racing at the thought that this might be her lucky break.
The gentleman could be some big-time producer who wanted to give
this little tobacco shopkeeper a chance.

“I’m not surprised. You don’t look as if you
belong here.” The man put a hundred-dollar bill on the counter.

He shrugged. “No matter. I don’t need the
change.”

The man lightly stroked the length of his
girlfriend’s arm. It looked so sensual and loving. Brie wished a
guy would touch her like that. He caught her staring at them. She
quickly glanced away, berating herself.
How pitiful am
I?

The redhead picked up the cigarettes
gracefully and slipped them in her purse. She took her lover’s arm
and smiled up at him. “Thank you, Sir.”

Brie thought it a little odd that the woman
had called him ‘sir’, but the man kissed her hand tenderly. “I’m
sure we can find a way for you to repay me.” They walked out of the
store without looking back.

Brie watched them leave, wishing she could
trade places with that woman. She looked down at the counter and
saw Benjamin Franklin staring up at her. Her heart raced again.
Would it be okay to pocket it when the man had obviously wanted her
to have it? She rang in the price of the cigarettes and hesitated
before picking it up.

Underneath the bill was a business card.
Brie took a closer look and read:

She looked down at the bottom and saw a
phone number and website address. Brie wondered if the gentleman
had accidentally left it behind, so she stuffed it in her pocket
just in case he returned. Brie stared hard at the money before she
put it in the till, deciding to talk to Mr. Reynolds about it. The
change from a hundred-dollar bill was
not
worth her
reputation.

When she got home after work that night,
Brie fished out the business card. Out of curiosity, she typed the
web address into her laptop. The screen that popped up looked
exceedingly professional. The organization appeared to be a
community college of some sort. She pressed the information link
and her jaw dropped.

The pictures at the top of the screen showed
women in various B&D poses. One girl had her hands tied behind
her back, and she was kneeling before a man dressed in leather.
Another girl was facing the camera, but Brie could just see the
swell of her naked ass. The guy behind her was holding an unusual
whip and looked as if he was about to take a swing.

Brie quickly exited the site, shocked by
what she’d seen. Why would the man carry around a business card
like that and why would he give it to
her
? She shivered when
she thought of him checking out her butt and was extremely glad she
hadn’t kept his money.

She went to bed with those images still
etched in her mind. Although she was tired, she couldn’t sleep.
Eventually, curiosity got the better of her and Brie grabbed her
laptop, bringing it to her bed. She revisited the site, wanting to
check out the rest of the pictures. Even though she found them
shocking, seeing the girls in those various poses was exceedingly
hot.

There was one position in particular that
Brie found intriguing. The girl’s wrists and ankles were bound to a
table. She was dressed in an outfit that barely covered her most
intimate parts. Her legs were spread wide open, and there was the
hint of another person just out of reach of the camera. What struck
Brie was the look on the girl’s face. She was looking at the unseen
person with an expression of anticipation and lust. For whatever
reason, that picture really turned her on.

She looked through all of the information on
the website. Apparently, people could take a six-week ‘course’ and
learn how to become a skilled submissive. It seemed such a strange
thing to study, and she wondered what possible benefit there was to
become proficient at something like that.

Brie found a link to reviews of the program
and read, ‘My life has changed since taking the course. I have
found my true calling and have never felt more alive.’

She figured the woman must have been a
social misfit to begin with, so she continued reading to see what
others had to say. ‘I never would have met my perfect Dominant if
it hadn’t been for my training. He says I’m the best submissive
he’s ever had. Thanks a million!’

Finally, she found what she thought was more
of a negative review. ‘Taking this course helped me understand that
submission is
not
my thing. At least I didn’t waste years of
my life trying to be something I’m not.’

Brie went back to the photo of the woman
bound on the table. If she was totally honest with herself, what
she really wanted was to be that woman…

Against her better judgment, Brie wrote an
enquiring email to the Training Center. Before she could have any
second thoughts, she hit the send button. As soon as she’d done so,
she groaned loudly.
Great, now they have my email
address!

She tossed and turned all night, worried
about the email she’d sent, even though part of her couldn’t wait
to get a reply. Brie let herself fantasize that she was on the
table, with the man at the tobacco shop as her partner. She played
with herself but couldn’t get off. She was unable to get a restful
sleep because of it and woke up cranky the next day.

Unfortunately, Brie had to wait until after
her shift to check for a reply. She was thrilled when she found an
email from the Center.

Thank you for your enquiry. Our campus is on
the bottom floor of a larger school. The same institution runs
both. As you probably read on the website, the Learning Center has
been running for over twenty-five years. Unlike most learning
institutions, we guarantee complete satisfaction. If you are not
happy with the training received, you are entitled to a full
refund. We believe that strongly in what we do here.

The tuition is five thousand dollars for the
six-week course. If you are unable to pay the amount, I suggest you
apply for our scholarship program. I will include an application
form in the packet. To apply for the program itself, I will need
your mailing address. There is an extensive questionnaire you must
fill out, as well as a required homework assignment.

If you are accepted into the school, you can
expect to start immediately. The classes take place every night
from seven until midnight on weeknights and from three until
midnight on Saturdays. The rigorous schedule allows us to pack as
much as possible into the six-week span.

You asked what the benefits are from taking
our exclusive training. Our program is the best of its kind. We
like to think of ourselves as providers of Geisha training for
submissives. Our students learn the art of submission, but they
also learn their personal limits.

It is a safe environment where students are
given the tools and experience to fulfill their submissive
tendencies. Of note: our graduates are sought by respected
Dominants around the world because of their extensive training.
Truly, it is a unique opportunity.

Let me know if I can be of further service
to you.