Read Brilliance of the Moon Online

Brilliance of the Moon 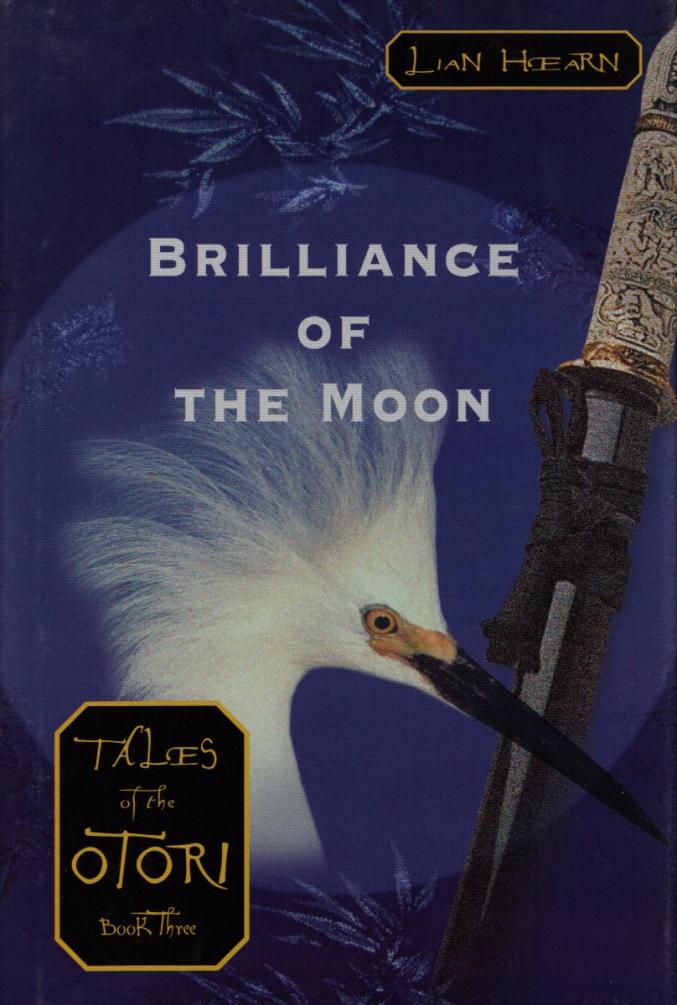 Brillance of the Moon

Tales of the Otori Book 3 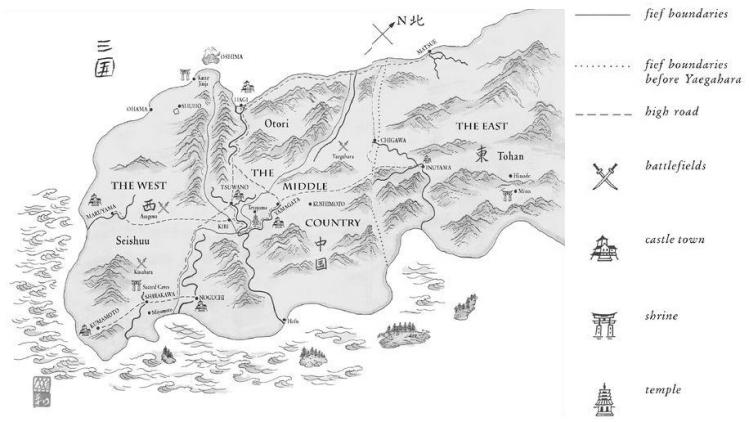 Otori Shigeru:
rightful heir
to the clan (I)

Haruka: maids in the household (I)

Shiro: a carpenter (I)

Otori Shoichi: Shigeru’s uncle, now
lord of the clan
(I)

Miyoshi Kahei: brothers, friends of
Takeo (I) Miyoshi Gemba (I)

Miyoshi Satoru: their father,
captain of
the guard in
Hagi castle (3)

Terada Fumio: his son, friend of
Takeo (I)

Lord Noguchi: an ally (I)

Lady Noguchi: his wife (I)

Junko: a servant in Noguchi castle
(I)

(An
alliance of several ancient families in the West; main castle towns:

Arai Daiichi: a warlord (I)

Maruyama
Naomi:
head of the
Maruyama domain, Shigerus lover (I)

Mariko: her daughter (I)

Sachie: her maid (I)

Sugita Haruki: a retainer (I)

Akane: maids in the household (3)

Amano Tenzo: a Shirakawa retainer
(I)

Muto Yuki:
their daughter
(I)

Kikuta Kotaro:
his cousin,
the Master (I)

Kikuta Akio:
their nephew
(I)

Kuroda Shintaro: a famous assassin
(I)

Lord Fujiware:
a nobleman,
exiled from the
capital (2)

Mamoru: his protege and companion
(2)

Matsuda Shingen:
the abbot
at Terayama
(2)

Raku: gray with black mane and
tail, Takeo’s first horse, given
by him to Kaede

Aoi: black, half brother to Kyu

(d.) = character died before the
start of Book I 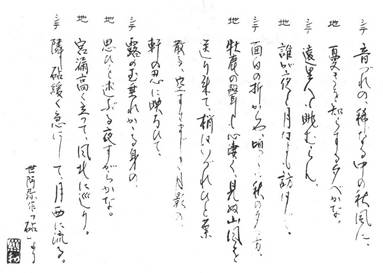 Others too, in far-flung villages,

Will no doubt be gazing at this moon

That never asks which watcher claims the night…

Loud on the unseen mountain wind,

A stag’s cry quivers in the heart,

And somewhere a twig lets one leaf fall.

T
he feather lay in my palm. I held it carefully, aware of its age
and its fragility. Yet its whiteness was still translucent, the vermilion tips
of the pinions still brilliant.

“It came from a sacred bird, the
houou”
Matsuda Shingen, the abbot of the temple at Terayama, told me.
“It appeared to your adopted father, Shigeru, when he was only fifteen, younger
than you are now. Did he ever tell you this, Takeo?”

I shook my head. Matsuda and I were standing in his room at one
end of the cloister around the main courtyard of the temple. From outside,
drowning out the usual sounds of the temple, the chanting, and the bells, came
the urgent noise of preparations, of many people coming and going. I could hear
Kaede, my wife, beyond the gates, talking to Amano Tenzo about the problems of
keeping our army fed on the march. We were preparing to travel to Maruyama, the
great domain in the West to which Kaede was the rightful heir, to claim it in
her name—to fight for it if necessary. Since the end of winter, warriors had
been making their way to Terayama to join me, and I now had close to a thousand
men, billeted in the temple and in the surrounding villages, not counting the
local farmers who also strongly supported my cause.

Amano was from Shirakawa, my wife’s ancestral home, and the most
trusted of her retainers, a great horseman and good with all animals. In the
days that followed our marriage, Kaede and her woman, Manami, had shown
considerable skill in handling and distributing food and equipment. They
discussed everything with Amano and had him deliver their decisions to the men.
That morning he was enumerating the oxcarts and packhorses we had at our disposal.
I tried to stop listening, to concentrate on what Matsuda was telling me, but I
was restless, eager to get moving.

“Be patient,” Matsuda said mildly. “This will only take a minute.
What do you know about the
houou}”

I reluctantly pulled my attention back to the feather in my palm
and tried to recall what my former teacher, Ichiro, had taught me when I had
been living in Lord Shigeru’s house in Hagi. “It is the sacred bird of legend
that appears in times of justice and peace. And it is written with the same
character as the name of my clan, Otori.”

“Correct,” Matsuda said, smiling. “It does not often appear,
justice and peace being something of a rarity in these times. But Shigeru saw
it and I believe the vision inspired him in his pursuit of these virtues. I
told him then that the feathers were tinged with blood, and indeed his blood,
his death, still drive both you and me.”

I looked more closely at the feather. It lay across the scar on
my right palm where I had burned my hand a long time ago, in Mino, my
birthplace, the day Shigeru had saved my life. My hand was also marked with the
straight line of the Kikuta, the Tribe family to which I belonged, from which I
had run away the previous winter. My inheritance, my past, and my future, all
seemed to be there, held in the palm of my hand.

“You will be leaving here soon. You have been with us all winter,
studying and training to prepare yourself to fulfill Shigeru’s last commands to
you. I wanted you to share in his vision, to remember that his goal was
justice, and yours must be too.”

“I will never forget it,” I promised. I bowed reverently over the
feather, holding it gently in both hands, and offered it back to the abbot. He
took it, bowed over it, and replaced it in the small lacquered box from which
he had taken it. I said nothing, remembering all that Shigeru had done for me,
and how much I still needed to accomplish for him.

“Ichiro told me about the
houou
when he was teaching me to write my name,” I said finally. “When
I saw him in Hagi last year he advised me to wait for him here, but I cannot
wait much longer. We must leave for Maruyama within the week.” I had been
worrying about my old teacher since the snows had melted, for I knew that the
Otori lords, Shigeru’s uncles, were trying to take possession of my house and
lands in Hagi and that Ichiro continued stubbornly to resist them.

I did not know it, but Ichiro was already dead. I had the news of
it the next day. I was talking with Amano in the courtyard when I heard
something from far below: shouts of anger, running feet, the trampling of
hooves. The sound of horses plunging up the slope was unexpected and shocking.
Usually no one came to the temple at Terayama on horseback. They either walked
up the steep mountain path or, if unfit or very old, were carried by sturdy
porters.

A few seconds later Amano heard it too. By then I was already
running to the temple gates, calling to the guards.

Swiftly they set about closing the gates and barring them.
Matsuda came hurrying across the courtyard. He was not wearing armor, but his
sword was in his belt. Before we could speak to each other, a challenge came
from the guardhouse.

“Who dares to ride to the temple gate? Dismount and approach this
place of peace with respect!”

It was Kubo Makoto’s voice. One of Terayama’s young warrior
monks, he had become, over the last few months, my closest friend. I ran to the
wooden stockade and climbed the ladder to the guardhouse. Makoto gestured
toward the spy hole. Through the chinks in the wood I could see four horsemen.
They had been galloping up the hill; now they pulled their heaving, snorting
mounts to a halt. They were fully armed, but the Otori crest was clearly
visible on their helmets. For a moment I thought that they might be messengers
from Ichiro. Then my eyes fell on the basket tied to the bow of one of the
saddles. My heart turned to stone. I could guess, only too easily, what was
inside such a container.

Lion in the Valley by Elizabeth Peters
Pleasure and a Calling by Hogan, Phil
Children of the After: Awakening (book 1) by Laszlo, Jeremy
Brigid Lucy and the Princess Tower by Leonie Norrington
Not Dead in the Heart of Dixie by R Kralik
Her Secondhand Groom by Gordon, Rose
Betrayed by Wodke Hawkinson
Trent (Redemption Romance Book 4) by Anna Scott
Torn by Laura Bailey
Hello Treasure by Hunter, Faye