Read Bringing Down the Krays Online

Bringing Down the Krays 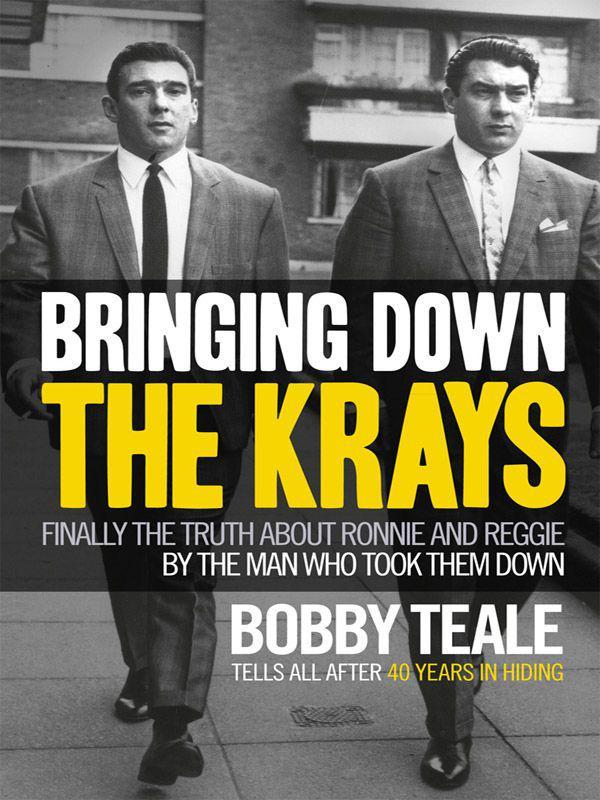 Prologue: Facing Down the Past

Chapter 2: Part of the Family

Chapter 8: The Party Comes to Me

Chapter 11: Moresby Road – and a Trip to Dartmoor

Chapter 12: Beside the Seaside

Chapter 14: A Walk in the Woods

Chapter 19: Bringing Down the House of Cards

Chapter 22: Into the Lions’ Den

Brought to you by KeVkRaY

Bobby Teale and his brothers, David and Alfie, were the three men the Kray twins trusted most. They weren’t in the Firm, they were closer than that. They were old family friends, confidants, companions…

But then things changed. Witnessing Ronnie and Reggie become increasingly psychotic – taking murder, torture and rape to sickening new levels – Bobby knew he had to take action. Unknown to his brothers, he became a police informer; risking not just his own life but those of the people dearest to him too.

Using the codename ‘Phillips’, he spent the next three years living on his wits, feeding back information to Scotland Yard. With bent cops on their side the Krays knew they had a grass in their midst, but before they could flush him out, Bobby’s evidence saw the gangsters get locked up for life.

Bobby fled the country, but now 40 years on he’s back. And he wants to set the record straight. With the help of his brothers, the man brave enough to stand up to the Krays has rewritten history as we know it; dispelling the myths and tearing apart the gangsters’ glamorous veneer to reveal the true, sadistic nature of Ronnie and Reggie.

Crammed full of explosive, new revelations,
Bringing Down The Krays
is the last great untold story of Britain’s most famous crime family.

Bobby Teale was born in central London in the middle of the Second World War, the third eldest of seven children. He met the Krays as a teenager and, after giving evidence at their trial, he left Britain in 1969 for a new life in America. Today he lives in Cedar Hills, Utah with his third wife Dawne.

He has written this extraordinary story with the help and love of his two brothers, David and Alfie Teale. 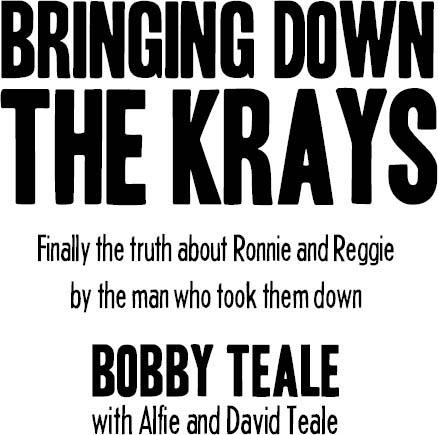 To our mother, Ellen Teale, and to Christine Teale

FACING DOWN THE PAST

I have spent a long time trying to forget who I really am. Look at me and you’d see an average guy as anonymous as the battered pick-up truck I drive and the plaid shirt I wear at weekends. I am a Canadian citizen with right of residence in the US, as good a neighbour and as law-abiding a citizen in our little slice of the state of Utah as anyone could wish for.

Most of my life I worked in the construction business. I still do. But once, a long time before, I had been someone very different.

The only bit of me which has stayed the same is my name, the one my parents gave me: Robert Frank Teale. Most people call me Bobby.

A few Christmases back, my daughter Paula bought me a large picture book as a present. It was called
Defining Moments in History
, and it included major world events such as Pearl Harbor and the assassination of JFK, plus quirky stuff like the invention of sliced bread. Sitting there in our home with all the kids opening their gifts around me, I skimmed through it until I came across a page that featured a photo of a horse-drawn hearse.

The name ‘REG’ was written on the side in big letters made out of flowers and the word ‘RESPECT’ was on the top, made out of more floral tributes. A huge crowd was following on foot and in an endless line of cars. The picture was taken in east London on 11 October 2000, so the caption said. I didn’t recognise quite where it was, but I knew exactly who it was in the coffin on his way to the cemetery.

I felt a sudden torrent of emotion. Trying to hide it, I stood up and got the attention of the family, saying casually: ‘See the man in this coffin? He was once my best friend.’

The kids were shocked. ‘Who is it?’ they asked.

‘His name was Reggie Kray,’ I said softly, ‘and he was one of the most notorious criminals of his time – or any other time. He had a twin brother called Ronnie. They were cold-blooded murderers. They ruled London by fear. I helped to bring them down. In fact I very nearly stopped them altogether.’

‘Dad, if you were his friend, does that mean you were a criminal too?’ one of the kids asked.

I didn’t know how to reply. There was a long silence. Eventually my daughter said softly, ‘Dad, did you ever kill anyone?’

‘The opposite,’ I said. ‘I tried to save people, and I suffered for it.’

I’d never told them a thing about who I used to be. This time, I don’t know why, it was different. I wanted to tell them a little bit more.

‘There was a cop who went after these people,’ I explained. ‘He was called Nipper Read. Do you know he told my mother, your grandmother, that without me it would have taken a hell
of a lot longer to have nabbed the Krays and get them off the street and locked up?’

I did not tell them that, for a time, I’d been completely in their thrall. That I’d been overwhelmed at how glamorous and powerful they seemed. How I’d left my first wife and baby daughter to be with them, how I’d carried guns for them, carried a gun myself, witnessed beatings and shootings. Like I was a Cockney version of that guy in the movie
Goodfellas
, the one who says: ‘As far back as I can remember, I always wanted to be a gangster.’ Well, for a little while I had been a gangster. Or at least I thought I was.

I had been a part of ‘the Firm’. Not the Kray firm,
the
Firm. There was only one that mattered.

Then something had happened which changed my life forever. I saw things that terrified and disgusted me, things that I would never want anyone to know about. I had to make a stand. I did something that put my own life in deadly danger and that of my beloved brothers: Alfie, a little older than me, and David who is a little younger. They did not know at the time just what I had done. I’d had to run away from my old life and let my family think I was dead. Could it really all have happened almost fifty years ago?

Anger and grief welled up in me. I slammed the book shut.

Over the years I’d mastered the art of cutting off emotionally from everyone. For months, I’d only managed to stay alive at all by acting. I thought I’d been so good at it. But maybe I wasn’t any more.

Did I really want my children to know the true story of what happened? Did I want anyone in my new life to know? My
children were now well out of school. They weren’t stupid. I had long ago decided that I would have to tell them all of it when the time was right. When I had worked out what really happened and why. Well, now was the time.

After that first shocking reminder of my past, I began to research more about the London of my youth, tentatively drawing to the surface old memories I had supressed for years. I trawled the internet. I was astonished at how much was out there on the Krays. What was it about them that exerted such a strong grip on the public imagination, even now, forty years after the height of their reign of terror? Late into the night, I’d stay up, discovering things I never knew about them at the time. But I also came to realise that there were a lot of things that my brothers and I had witnessed that nobody else knew about – and certainly had never written about. We were part of it. We’d been there.

This book could not have been written without the cooperation of my two brothers, Alfie and David. They were at the heart of everything and they were involved with the Krays well before I ever met them. Many of the stories contained in these pages were drawn from their detailed recollections, told to me either at the time or many years later when we were reunited. We have dug up some painful memories as we went over these events together during the course of writing this book. I have to thank them from the bottom of my heart for their support. Without them it would only be half the story.

There had been official cover-ups. There had been myth-making and distortion on an epic scale. There were so many lies. Now it was time for the truth.

WHERE TO START?
Right at the beginning is as good a place as anywhere. This is a story about family – about loving, losing and being found again. One of the very earliest episodes in my life was being lost. I was just a baby. I was born in Islington in north London on 23 January 1942. The war was on. In fact it had been on for two and a half years when I had my first big adventure.

One evening during an air-raid alert the family had to go to the shelter with all the children, rushing to get in as the siren rang out. The smallest children, including me, were squeezed together into prams and pushed inside. When they did a head-count of the children inside, I was missing. My mother was frantic and screaming. A brave man went out and found me in the street and carried me to the shelter. That’s how Mum told it to me, when I was old enough to understand. I loved hearing this story, particularly the part about how overjoyed she was to have me back.

A little later it was the time when the flying bombs were coming over London. It was just after D-Day. My first memories are of cowering inside the coal cellar on the occasions when we
couldn’t get to the air-raid shelter in time. The children were put inside a kind of upturned metal table with wire mesh round it, the idea being that if a bomb hit the house, the rescuers could dig down through the rubble and perhaps save any children protected by the metal basket. We were in there plenty of times but we never got blown up. My mother was shocked when I told her I remembered that in such detail. I must have been about eighteen months old.

Strangers at Dawn by Elizabeth Thornton
Society: After It Happened Book 3 by Devon C Ford
02 Jo of the Chalet School by Elinor Brent-Dyer
King Hereafter by Dorothy Dunnett
All Around the Town by Mary Higgins Clark
Los Borgia by Mario Puzo
As The Crow Flies (The DI Nick Dixon Crime Series) by Boyd, Damien
Shadow Gate by Kate Elliott
Hillbilly Rockstar by Christina Routon
Spy Games by Gina Robinson