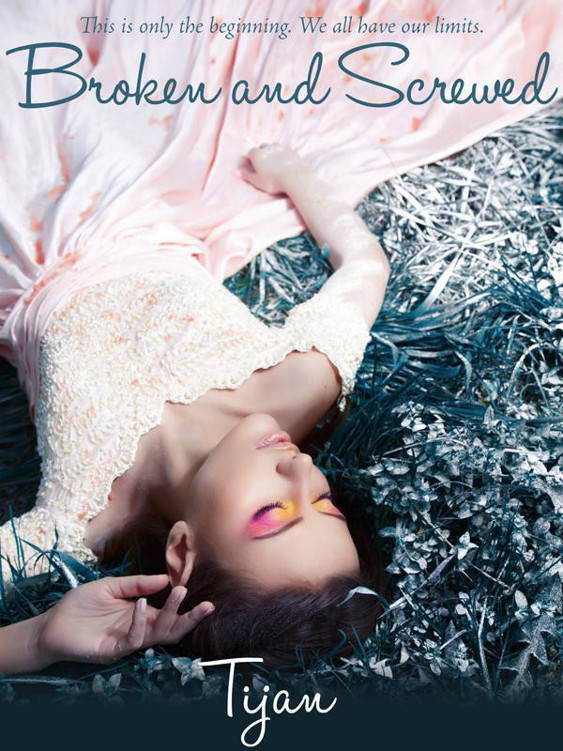 When I got to the bonfire, the smell of fire and booze filled the air. Underneath was the smell of sweat. My nose wrinkled up and I grimaced, but headed towards it. The guys had been partying all day since it was the last day of school. I was glad I didn’t smell anything worse.

People swarmed in the woods as I continued towards wherever the fire would be. That’s where my friends would be. Angie and Marissa liked to be the center of attention. Angie was the willowy blonde with a model’s look. Her blue eyes seemed to launch out of her body. They were intense, smoky, and had ensnared most of the male population in our school. And Marissa rivaled her in the looks department. She was petite, with jet black hair, dark almond eyes, and a personality that dubbed her Sullivan High School’s man eater. Even though we had finished our junior year and had three months of summer before we started our reign as seniors, I knew they wanted to start early. Those two were ready for the senior girls to leave so they could take the crown as the queens of our school.

And there was one of them.

I couldn’t stop a chuckle as Angie leaned over her boyfriend’s shoulder and waved at me. She was so eager; she tipped forward and fell down his body and to the floor. She’d been standing on a truck and her movement sent a jerking movement underneath the rest of the girls who danced there. They screamed, grabbing onto anything to steady them. A group of guys stood around the truck. Some of the guys were ogling the girls, but some of them were chatting with their friends. More than a few jumped forward and couldn’t hide their smirks when the girls grabbed them for balance.

Justin looked down at Angie on the ground, sighed, and continued talking with his friend.

“Alex!” Her shout turned into a whine and I took her hand. As I hauled her back to her feet, she groaned. “I’m so embarrassed.”

“You shouldn’t be.” She’d done it enough times over the past year since she had started drinking. Then I glanced around. “Where’s Marissa?”

“Where else?” She drew upright. Her tone turned snippy. “Trying to hit on your man. I don’t know why she even tries. He doesn’t want a girlfriend since he broke up with Sarah. Everyone can see that Jesse Hunt is the hit ‘em and quit ‘em guy this year. Seriously. He’s hooked up with someone at every single party.” She threw her arm around in a circle and her voice raised a notch. “And everyone also knows that if he’s going to date someone, it’s going to be you.”

The slight enjoyment I had when I first got to the party died. “Stop, Angie. Jesse and I aren’t friends. We’re nothing.”

“And if he was going to date someone, it would be Sarah. It wouldn’t be me. He was with her for three years, remember? Those types of feelings don’t vanish.”

She snorted again. Her chest jerked up and down and she crossed her arms. “I’m going to get more beer. You want any?”

She left even before she saw my response, but she knew I didn’t drink. The only two times I ever had any alcohol were the two times I got wasted. Both nights intermingled with harsh memories, memories I didn’t even want to think about now.

This time it was Marissa. She had a bright smile on her face as she hurried around a group. She held a cup of beer in one hand and was wiping her face with the other as she stopped next to me. She panted for a second, but then flipped her black locks over her shoulder. Her hand went to her hip and just like that, her pose could’ve been in a magazine.

“Hey.” I was half warm, half cautious. Was she going to talk about Jesse? He’d been her obsession for the last month. I knew she didn’t want to really date him, but she did want to sleep with him. Marissa had always harbored feelings for him most of our lives. She never uttered a word to me until the last two months when she realized that Jesse and I were more strangers than what we had been.

She latched onto my arm. I fought from cringing from her beer breath as she fanned herself. “Okay, first: Jesse is an ass.”

“But, holy cow, that makes him so super hot. Am I weird? I must be wired backwards. I dunno, but I want him even more. I swear. Can you talk to him? Tell him I’m good in bed. No, wait. He has to know I am. I mean, hello.” Then she frowned and her eyes crinkled together. “Wait. What was I talking about?”

“What?” She perked up. Her nails dug into my arm.

“Oh!” Her eyes went wide again. “Oh my gosh! I am so sorry, Alex. Did I hurt you? Please tell me I didn’t. I’m such an idiot. What was I talking about before?”

I peered closer. She didn’t look that drunk.

“I…” I had no words. Even for Marissa, this was more forward than she’d ever been before. She had to have been drunk because the alternate option was that my best friend was incredibly insensitive to me. Had she not forgotten about the last year? Or why Jesse and I weren’t close anymore?

And then someone threw their beer on her. She was soaked in an instant. Her mouth fell open. Anger filled her face, along with shock, but her eyes were wide as she turned. Angie stood there with a smug smile and an empty cup. She waved it at Marissa before her hand fell to her hip. Both of them faced off against each other. Angie stepped close. She was taller and looked down her nose at Marissa. “Are you kidding me? You did not just ask Alex to put in a good word with Jesse for you? Are you serious? Seriously?!”

“You bitch!” Marissa screeched. She wrung her hands in the air, as if she wasn’t sure what to do with them.

“Guys.” I started to step between them.

I was hauled back by Justin; he bypassed me to grab Angie’s shoulders. He turned her away, but sent a scathing look at Marissa as he did.

Her hands flew in the air. “What?” she snapped at him.

His eyes flickered once. A dark look was in them and her hands fell back down. She took a breath, looked at me, and took another breath.

And then I heard from her in a small voice, “I’m sorry, Alex. I wasn’t thinking about you.”

I took a deep breath. My stomach settled again and I shrugged. “It’s okay.”

My heart pounded. What was she going to say?

“Never mind. Do you want something to drink?”

I let out a deep breath of relief. She hadn’t said it. And, like Angie, she left before I could reply. They both knew me so well.

Justin took Angie back to his truck and they climbed inside. Her arms flew around. Her face kept switching from outrage to fury and Justin kept patting her back. I stood there. I still had no idea what to do. They would reconcile in the morning. It was what they did. They would get heated, both of them were so honest and open. At times, the words weren’t received well, but they always made up in the morning. When I saw Marissa with some of her cheerleading friends, I knew it would be sooner than that. She was biting her lip as she cast concerned looks towards Angie. She sent a few towards me, but her eyes fluttered and she looked away.

I made the decision to leave. This party wasn’t for me, not that night, not with him there.

A few girls called out goodbyes when they saw that I was leaving, but no one stopped me. No one dared because the truth was that I wasn’t close to any of them anymore. I had been. A year ago I was one of the popular girls. It was why I had become friends with Angie and Marissa. No one could rival us when we were together.

My phone buzzed as I neared where I had parked my car. I pulled my phone out and saw the text from Marissa.
I’m sorry. I really am. Please don’t be mad at me. I’m really really really sorry if I hurt you. I’m so stupid sometimes. Ok. All the time. This time. I was stupid this time. Ill make it r8t wth Angie too. Promise. Breakfast in the am? Barnies?

I thumbed a response back.
Sounds good. Call when u wake up.

I heaved another breath. Was I mad? No. That was Marissa, she didn’t think sometimes. Was I hurt? On this night, I couldn’t breathe without hurting. I should’ve replied, told a lie to my friend, but I didn’t. I pocketed my phone and kept my head down as I got to the car.

Everything slowed to a halt after that.

Nothing happened. No one made a sound. No one moved. There were no animals in the background, no smell that warned me, but tingles raced down my spine and I knew.

I looked up, swallowing over a knot.

There he was, Jesse Hunt.

His dark eyes penetrated me from across the ten yards that separated us. His black hair had been buzzed since that afternoon. His lips were curved in a sneer and he was sitting on my car trunk. His knees were pulled up as his feet rested on the bumper. He had on a sleeveless black shirt that was ripped at the ends. The tattoos on his arms seemed even darker from the moonlight. They were highlighted against his skin though he was golden tan.

My voice couldn’t work. “What are you doing here?” I sounded hoarse.

My heart was pounding. I couldn’t get enough air.

His top lip curved upwards in a smile, but he still kept the sneer on his face. I never knew how he could do that, but he had perfected it from when we were in junior high. “What? You got those virginal panties on now?” His eyes flashed a warning to me. “What do you think I’m doing here?”

I swung away. Why could he affect me so much?

“Hey!” He raised his voice a notch. “It’s the big night for us, Alex. Come on. Who else would I be with tonight? Only you and me. We’re the only ones.”

I lowered my head. He was right. My heart slowed a bit. No one else could understand. No one else had loved Ethan like we had.

But that didn’t mean I wanted to think about my big brother at that moment. So I swung back and rushed out, “I saw Sarah at the bonfire. She looks pretty.” I wet my lips. When had they gone so dry? “Do you think you’ll ever get back together with her? I think she still loves you.”

He stared at me for a moment and then snorted. When he raised his hand, I saw the flask for the first time. He was drunk. Of course, he was drunk. I blinked back rapid tears. He only talked to me when he was drunk, but no—that wasn’t correct. There were lots of times when he had been drunk and he ignored my calls, my looks, or my pleas for any comfort he could’ve provided.

“Are you serious?” He rolled his eyes and for some reason, it seemed savage when it came from him. He fixed me with another penetrating stare. “Come on, Alex. What are we doing here?”