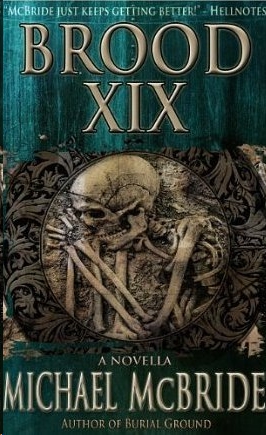 "The Generosity of Strangers" copyright ©
2006 by Michael McBride

This book is a work of fiction. Names,
characters, places and incidents are either products of the
author's imagination or used fictitiously. Any resemblance to
actual events, locales, or persons, living or dead, is entirely
coincidental. All rights reserved. No part of this publication may
be reproduced or transmitted in any form or by any means,
electronic or mechanical, without permission in writing from
Michael McBride.

For more information about
the author, please visit his website:
www.michaelmcbride.net

This ebook is licensed for your personal enjoyment only. This ebook
may not be re-sold or given away to other people. If you would like
to share this book with another person, please purchase an
additional copy for each recipient. If you're reading this book and
did not purchase it, or it was not purchased for your use only,
then please return to Smashwords.com and purchase your own copy.
Thank you for respecting the hard work of this author.

Remains (from The Mad & The Macabre, with
Jeff Strand)

The Calm Before the Swarm

The Generosity of
Strangers

For Gene, Gord, and Tom...my cohorts in
crime

Special Thanks to Gene O'Neill, Gord Rollo,
Tom Moran, Jeff Strand, Brian Keene, my family, and all of my loyal
readers, without whom none of this would be possible.

There were moments made for memory, when the
universe aligned just right and granted the briefest glimpse into
the benevolent heart it hid so well under the guise of oppression
and pain. The perfect moment when one simply stopped doing whatever
had seemed so important only seconds earlier in order to take the
kind of mental snapshot that would rise unbidden through the years,
bringing with it the wistful smile we save only for ourselves.

For Vanessa Snow, this was such a moment.

Time both stood still and raced past. The
dishes in the sink vanished beneath the rising swell of bubbles
while the faucet continued to run. In her hands, the glasses and
plates washed themselves. The window in front of her afforded a
view into another world entirely, where the early afternoon
sunlight slanted through the shifting, Spanish moss-bearded
branches of the cypress trees in golden columns so pure they could
have been individual rays sent years ago from hundreds of thousands
of miles away with this one occasion in mind. They shined like
celestial spotlights onto the young girl kneeling at the edge of
the yard where grass gave way to the morass of the Big Cypress
Bayou and Caddo Lake beyond. The silky black locks that flowed over
her shoulders shimmered in stark contrast to her filthy clothes.
She was covered in mud; up her arms, down her legs, smears on her
cheeks. Her companion, who was undoubtedly responsible for the
mess, pranced around her, paws thick with brown sludge, his muzzle
and the better part of his head already beginning to dry into a
cracked crust. The Irish setter's tongue lolled sideways out of his
mouth as he panted against the heat. The little girl wore a
matching expression, although hers was the result of supreme
concentration versus the enduring silliness that made it impossible
to stay mad at the dog, despite the two-foot-deep hole he had
exhumed from the trim behind the garden where once the now-uprooted
blue fescue ornamental grasses had grown.

Vanessa turned off the water and wiped the
suds from her hands. She opened the back screen door and stepped
out onto the porch. The muggy heat swaddled her like a wet blanket.
She closed the door silently behind her and swished through the
damp lawn in her bare feet.

Buddy saw her first and bounded across the
yard to greet her. He leapt up, braced his muddy front paws on her
apron, and licked her chin.

"Good boy," Vanessa said, pushing him gently
back down.

Emma looked up at her and blinked the sun out
of her eyes. She beamed with a grin that lit up her entire
face.

"Look what I made for you, Mommy."

She lifted what at first appeared to be a
giant divot from the lawn with both hands and held it out in her
cupped palms.

Vanessa crouched in front of her six year-old
daughter, the center of her world, and accepted the sloppy creation
with a smile.

"It's beautiful," she said, turning it over
and over in her now-filthy hands.

Emma had packed mud into a shape that
reminded Vanessa of a plump gingerbread man and wrapped the long
blades of the blue fescues around it to hold it together. There
were small knots where the grass had been inexpertly tied. Two
shiny pebbles were pressed into its face to approximate eyes and
bound in place with more tangled blades. Heart-shaped leaves had
been affixed to the sides of its head to form ears. It was roughly
a foot tall, and while a single drop from any height would
undoubtedly destroy it, Emma had done a remarkable job of
constructing it.

"It's a teddy bear," Emma said with evident
pride. "I made it just for you."

Her smile grew even wider.

"It's amazing, honey. How did you know this
was exactly what I wanted?"

"Every girl needs a teddy bear, Mommy. You
can put it on your dresser just like the ones in my room."

Vanessa smirked. Lord only knew what kind of
bugs and germs were crawling around inside that thing.

"Maybe the front window where we keep the
plants would be a better place. That way it'll be the first thing
people see when they're coming up to our house."

"Okay," Emma said. She smeared her hands
across the front of her dress.

It's only mud, Vanessa told herself. It'll
wash right out. There was no point in getting upset about it.
Besides, how could she even consider being mad at such a precious,
thoughtful little angel.

"We need to hurry up and get you in the
bath," Vanessa said. "Your daddy's going to be home soon...and he has
a
big surprise
planned for you tonight."

"If I told you, then it wouldn't be a
surprise, now would it?" Vanessa lowered her voice to a
conspiratorial whisper. "But it must be pretty exciting if your
daddy's taking off work early for it. I think you can probably even
wear your new dress."

Emma whooped and ran for the back door with
Buddy at her heels.

Vanessa followed, the filthy bear held at
arm's length. It was slick and slimy and smelled faintly of marsh
gasses, and yet still it was now one of her most treasured
possessions. At least until it started to decompose.

Marion County Sheriff's Deputy Trey Walden
had drawn the short straw as usual. He had already seen the sheriff
and the other two deputies wandering toward the carnival with their
families, while here he was, patrolling the broad dirt parking lot
like some kind of minimum-wage rent-a-cop. The uneven rows passed
to either side, packed with dusty pickups, older model sedans, and
even a smattering of rusted tractors. Men and women strolled
hand-in-hand toward the path leading down the hill through a grove
of magnolia and cypress trees toward where the traveling carnival
had risen from the marsh, seemingly overnight, in the seldom-used
Marion County Fairgrounds. Some towed children in strollers and
wagons, while others carried wide-eyed kids on their hips and
shoulders. All of them were dressed for a night on the town. Women
even wore dresses and scuffed high-heel shoes, as though an evening
at the fair passed for high society in this remote section of
Eastern Texas, mere miles from the Louisiana border.

His own girlfriend was somewhere down there
in the crowds as well, drinking foamy beer from a clear plastic cup
and eating funnel cakes with her friends, while he cruised
aimlessly through the rutted lot, the tires rising and falling
awkwardly over clumps of ambitious weeds on the cruiser's stiff
suspension, waiting for someone stupid enough to attempt to break
into one of these cars with nothing of any real value locked
inside.

Trey sighed and rolled down his window in
hopes that the evening air would help keep him alert.
Unfortunately, it was every bit as hot and stifling as that inside
the sweltering Caprice.

Music and a riot of voices drifted uphill
from where he could faintly make out the blinking white and red
lights through the trees. He heard laughter, clanging sounds, and
the rumble of a rickety roller coaster. This was going to be all
everyone talked about for the next few weeks, two nights of fun and
games, and all he would be able to add to the conversation was that
he had ensured the safety of their vehicles so they could have the
time of their lives without him.

He paused at the end of the main aisle so
that his headlights washed over the wide path through the shadowed
grove. A line had formed at the ticket booth under a large
hand-painted sign. Crowley's. No one was about to mistake it for
Ringling Bros., that was for sure.

A tapping sound on the side of his cruiser
made him flinch.

He had to crane his neck to look up to where
Emma sat on her father's shoulders, her legs hanging against his
chest. Warren was more than six feet tall. Piggybacking around the
doctor's neck must have been like a ride in itself.

"Hiya, munchkin. Are you ready to have some
serious fun?"

"They have elephant rides, you know. Have you
ever ridden an elephant?"

"Can't say as I have, but I expect you to
tell me all about it. And make sure you get some of that cotton
candy all these people are walking around with."

"I want one of those huge suckers
instead."

"Call me on my cell if you're able to take a
break," Vanessa said. "We could grab a beer or something."

She smirked, gave his left arm a squeeze
through the window, and headed out of the parking lot with her
family. With a flippant wave over her shoulder, she merged into the
crowd funneling down the path.

Two-thousand and thirty-two people in town,
and it appeared as though every single one of them was down there
around the big top.

Vanessa slipped her arm around her husband's
waist and leaned her head against his upper arm. Myriad colors
flashed all around her from the lights strung overhead between the
roofs of the claptrap attractions. The mosquitoes were out in full
force, but no one complained. She smelled spilled beer, sugar,
manure, and the sour scent of body odor from the masses packed
shoulder-to-shoulder in the narrow aisles. Bells clanged and alarms
rang as giant stuffed animals were won in games of chance.
Ticket-takers hollered over the chaos, summoning ladies and
gentlemen, boys and girls to come right on up and see breathtaking
and terrifying sideshow attractions and oddities. Rides grumbled.
Children screamed. Every dozen feet she had to hop over a mound of
animal dung.