Read Brooklyn Noir 3: Nothing but the Truth Online

Brooklyn Noir 3: Nothing but the Truth 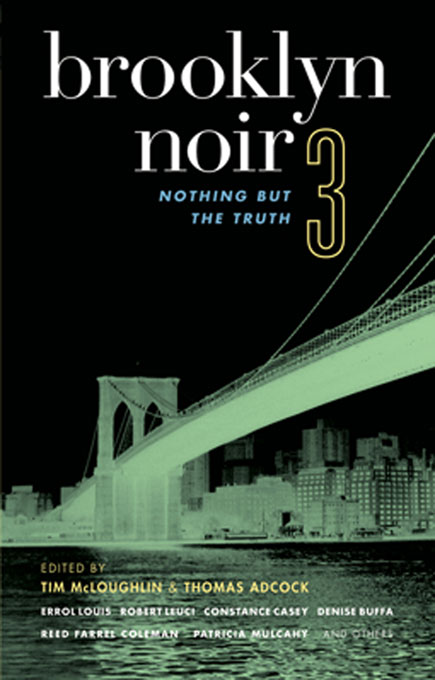 All rights reserved. No part of this book may be used or reproduced in any manner whatsoever without the written permission of the publisher.

A
LSO IN THE
A
KASHIC
N
OIR
S
ERIES
:

O
ne sweltering evening a couple of years ago I was giving a reading at Tillie’s, a café in Fort Greene, Brooklyn. It was part of a summer-long blitz to help publicize the first
Brooklyn Noir
. The contributors and I did forty-two readings in New York City that summer, all but six in Brooklyn. Predictably, a lot of them are now a blur. This one, however, stands out vividly in my mind. Patricia Mulcahy, the proprietor of Tillie’s, welcomed me, and said, “I have a
Brooklyn
Noir
story to tell you.” She then related the tale that is included in this volume, about the killing of “Bobby from Russia.”

I wound up at the Alibi Club that night, just down DeKalb from Tillie’s, drinking and scheming with Akashic’s publisher, Johnny Temple. We decided that at some point it would be interesting to do an anthology of true crime stories with the same mood and geographic structure as
Brooklyn Noir
. After all, it seemed as though every bar, bookstore, or library we read at had some connection to a sinister event. People were all too eager to point out back rooms or side streets where something had been heisted or someone had been whacked. What fun it would be to record those stories. What fun indeed.

As this book began to coalesce, the vibe of the project changed, in a small but steady way. It was insidious, like swimming in a deceptively gradual current.

There is a difference, as editor, between cheering the literary accomplishment of a fiction writer who has delivered a brilliant story about a serial killer or hit man, and reading the true account, however beautifully written, of a young woman raped, murdered, and forgotten. So this book, though it has its light moments (and thank God for those), is for me the darkest of the
Brooklyn Noir
series. These pieces remind us that crime is personal. It happens to us and to our neighbors. Sometimes it happens because we do nothing to prevent it. Life does not always offer the moral arc we so desperately crave in fiction. If it did, we’d have no need for myths and fables, religion or miracles.

Thomas Adcock was the first contributor to deliver a story, and I’m grateful that he then agreed to coedit the book; he brought aboard a posse of writers of which I could have only dreamed. Because the stories are about crime, about Brooklyn, and true, more than one ends in court proceedings. And because Brooklyn is the world’s largest small town, real life overlaps in ways that fiction does not. My own reminiscence of events in and around the courts, “Snapshots,” sits at the intersection of stories by Errol Louis, Dennis Hawkins, and Denise Buffa.

As with the two previous volumes, our emphasis is on the quality of the writing as well as the storytelling itself, and just as the earlier anthologies have done their bit to muddy the waters between genre and literary fiction, here we’ve done our best to blend reporting, personal essay, and memoir.

It’s been an interesting few years since
Brooklyn Noir
debuted. That book, as of this writing, has just entered its fifth printing, with
Brooklyn Noir 2: The Classics
headed for its second. There are now more than twenty volumes of original fiction in the Akashic Noir Series, with another dozen in production. That’s four hundred or so stories that might not otherwise have been published, or for that matter written. No small feat given the paltry opportunities these days for publishing short fiction. So now let’s see what we can do for true crime.

Read this book. Enjoy it. Be horrified by it. Carry it with you always. And the next time you’re watching a particularly bizarre and salacious news item on the television set in your neighborhood pub, and the guy on the next stool says, “You can’t make this shit up,” smack him with it.

In which members of one
group at one end of the block try to find and capture hiding
members of an opposing group. A captured player is
dragged into a chalk circle on the pavement at mid-block,
by a hunter who holds him/her there long enough to holler,
“Ring-a-Levio, 1-2-3!”

A SPRING AFTERNOON IN THE
MEADOW, THAT “LONG, LOUD
SCREAM”