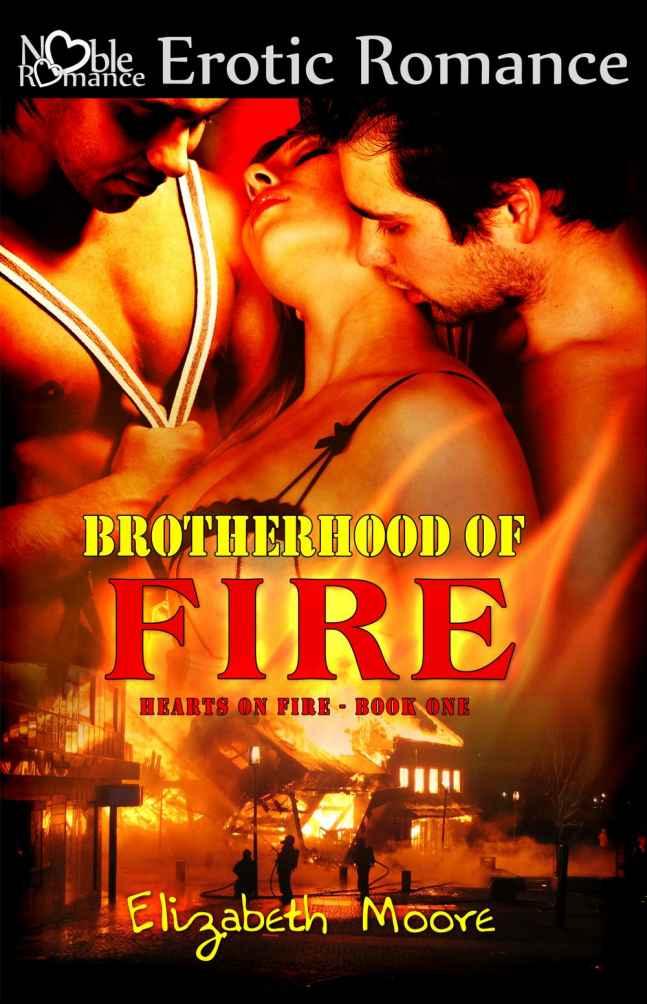 This book may not be reproduced or used in whole or in part by any existing means without written permission from the publisher. Contact Noble Romance Publishing, LLC at PO Box 467423, Atlanta, GA 31146.

This book is a work of fiction and any resemblance to persons, living or dead, or actual events is purely coincidental. The characters are products of the author's imagination and used fictitiously.

For my Mom, my biggest fan and cheerleader.

At the Grand Falls Fire Department, brotherhood is the key to everything. It's the glue that holds firefighters together through thick and thin. When Garrett O'Neal realizes the brotherhood he shares with his mentor and best friend could be something that fulfills the erotic fantasy he has of sharing his wife, Carrie, it begins a journey that none of them will escape without being plunged into the depths of flaming passion. A hot and intense tryst becomes so much more than just a bedtime fantasy. As the three begin to navigate the boundaries of love and desire, the fires of passion and their passion to fight fire threatens to tear the three of them apart forever.

"Mmm. That's it, deeper," Garrett moaned. Looking down at Carrie's dark auburn head bent over him, her eyes rapt in concentration and desire, he felt his gut clench. "Beautiful," he breathed. "So fucking beautiful."

Her lips stroked faster, accompanied by a low moan that purred from her throat and vibrated his whole body. Nothing set him off like his wife's mouth on him. His eyes swept over the graceful curve of her back, the soft, rounded swell of her ass. He had a brief image of the one thing that might take him higher, and his body tightened with a flash of heat.

Her nails raked gently over the sensitive skin of his balls, she slid them over her fingers, and he couldn't stifle another groan. Keeping his eyes on the view, he resisted the urge to let them roll back in his head. The sight pushed him into zero-lucid-thought territory. The words were out of his mouth before it registered he was speaking aloud. "God, I'd love to watch someone fucking you while my cock is buried in your mouth."

"Got a line on it?" The captain's voice rang through the speakers in his SCBA. The Nomex hood and the closed in space around his ears made the sound tinny and muffled.

"Yeah!" he yelled back, struggling to hold the bucking hose he had trained on the flames creeping over their heads. The blasting heat rolled over him in waves, the sweat poured down his back, and he was thankful he'd listened to John and wore nothing but a t-shirt beneath his bunker coat.

"Command to interior!"
"Interior, go ahead," he barked.
"Fans are set, O'Neal, ventilation's done. You knocking it down?"

He looked around, trying to make out how much orange flame he saw licking through the thick smoke. Hell, his hands were barely visible on the hose in front of his face, but the heat was lessening, and that was a good sign. He looked up as a curl of flame sucked itself into the cracked drywall where it met the ceiling.

"Getting there. We're in the back bedroom. Somebody needs to hit the room next door; I think the fire's in the wall."
"Got it, interior. Sending in two. Castille, jump in on O'Neal and check Hughes; he's been in awhile."
"Got it, Chief; Castille and Klein coming in."
"Pretty thick in here. Everybody check your teams!" He heard his lieutenant call out.
"Castille! You in?" He felt movement behind him, but in the dimness and the soot, he couldn't make out a damn thing.
"Right behind you, bro; got two more next door." He felt the hose give a jump when Rick grabbed on behind them. "Hughes, head to rehab. Gray, you too; Klein is taking your spot. Team up and head out."
Garrett grinned. Seasoned guys like Hughes and Gray would grumble at having to leave halfway through, but they wouldn't deny his privilege to stay in on his first fire.
"How's that bitch doin', O'Neal?" He heard the grin in Castille's voice, even through the muffled sound. The SCBA masks made it sound like they were talking through tin cans stuffed with socks.
"Kicking it, Captain, you know it." He grinned beneath his mask and shook his head at his own ridiculous glee.
"Interior to command, two coming out, firefighters Hughes and Gray on the way out."
"Got it, interior, now cut the chatter, and put the fire out, probie."
A low snicker followed through the speaker in his SCBA, and he tried not to laugh, tried to keep his breathing down to normal even through the excitement so he didn't run out of air before the fire was out. No way he was leaving 'til this thing was done.
"Command to interior."
"Interior, go ahead." He lifted the hose to the high corner of the wall, arms tight, back straining. A few hours from now, every damn muscle in his body would be sore, but right now, the adrenaline wasn't letting him feel a damn thing except the rush, his heart beating like mad, and the ridiculous grin he still had on his face.
"How's it going?"
Almost there, Chief."
"Let me know when you got it down, and I'll send a team in with the thermal."
"Got it, Chief." He shook his head.
Thermal, my ass.
By the time he was done, they wouldn't need that damn thing; this bitch would be cold.
"Hey! Where the hell is Torman?" Marks' voice rang through the speaker clear, sharp, and pissed off.
"Marks! You in the second bedroom?"
"Yeah, and I can't see a thing. Where's my partner?"
"Who's your partner, Marks?" Castille's voice radiated irritation. "Torman? He just high tailed it past me."
"I'll be a son of a—"
"Interior! Firefighter Marks, you on your own in there?"
A momentary silence weighed. The fire still crackled low along the floor, and he attacked it with the hose, but he held his breath for an instant, as likely did every other guy in the house knowing what had just happened.
"Yeah, you need to find Torman; he left, and I don't know where he went. I got Castille and O'Neal right here."
"Leave together, all of you, I know right where he is, I'm looking at him. Don't bother searching for him." The anger hissed in the Chief's voice. Everyone in earshot knew the Chief would deal with Torman but even worse would be what came when Marks got a hold of him.
A half hour later, without further incident, the fire was completely out, but it was going to take days to put out the burn in his gut.
A proud burn. His first real fire.
One of the captains clapped him on the back. "Great job, man; still have a hard on?"
"Hell yes!" He grinned as he headed for the truck, sweaty, covered in soot, and feeling like a million bucks. He peeled off his bunker coat, cool air rushing over his skin. It was eighty-five degrees out, but he shivered. When you go from over a thousand degrees to normal, it feels like the difference between an oven and the North Pole. His bunker coat still felt hot in his hands, and covered in ash.
"Shit. Hose me, Gray," he said, putting it back on and cringing at the feel of the damp insides clinging to his sweat-soaked shirt. Gray hit him with a low stream of water, blasting off the cinder and ash clinging to his coat.
He shook off the water, peeled the bunker coat off again, and headed for the truck, feeling the cool breeze drying his sweaty skin. He shook off the chill and wiped his forehead.
"Hey, man, good job," John said, a shit eating grin plastered on his face as he stood leaning on the back of the truck waiting for him.
"You go in?" Garrett asked, eyeing his dry clothes and clean turnout gear.
John shrugged. "Roof. Ventilation."
"You hung back for me, didn't you?"
"Yeah, well, it was your time, man; I've seen plenty. I wanted you in before those other numb nuts assholes."
"Thanks."
John shook his head "No problem, man, that's what we do, right? Look out for each other. You're my brother."
"Well, thanks. You know I got your back. Always."
"No rolling hose for you, O'Neal!" Their Captain yelled over. "I think Torman has that covered. Head to the station and shower so we can get to that damn picnic; I'm hungry!"
He and John grinned at each other. They both looked over to where Torman was rolling up the hoses as the Lieutenant stood over him, barking orders. The mocking laugh he let loose was almost as loud as John's.