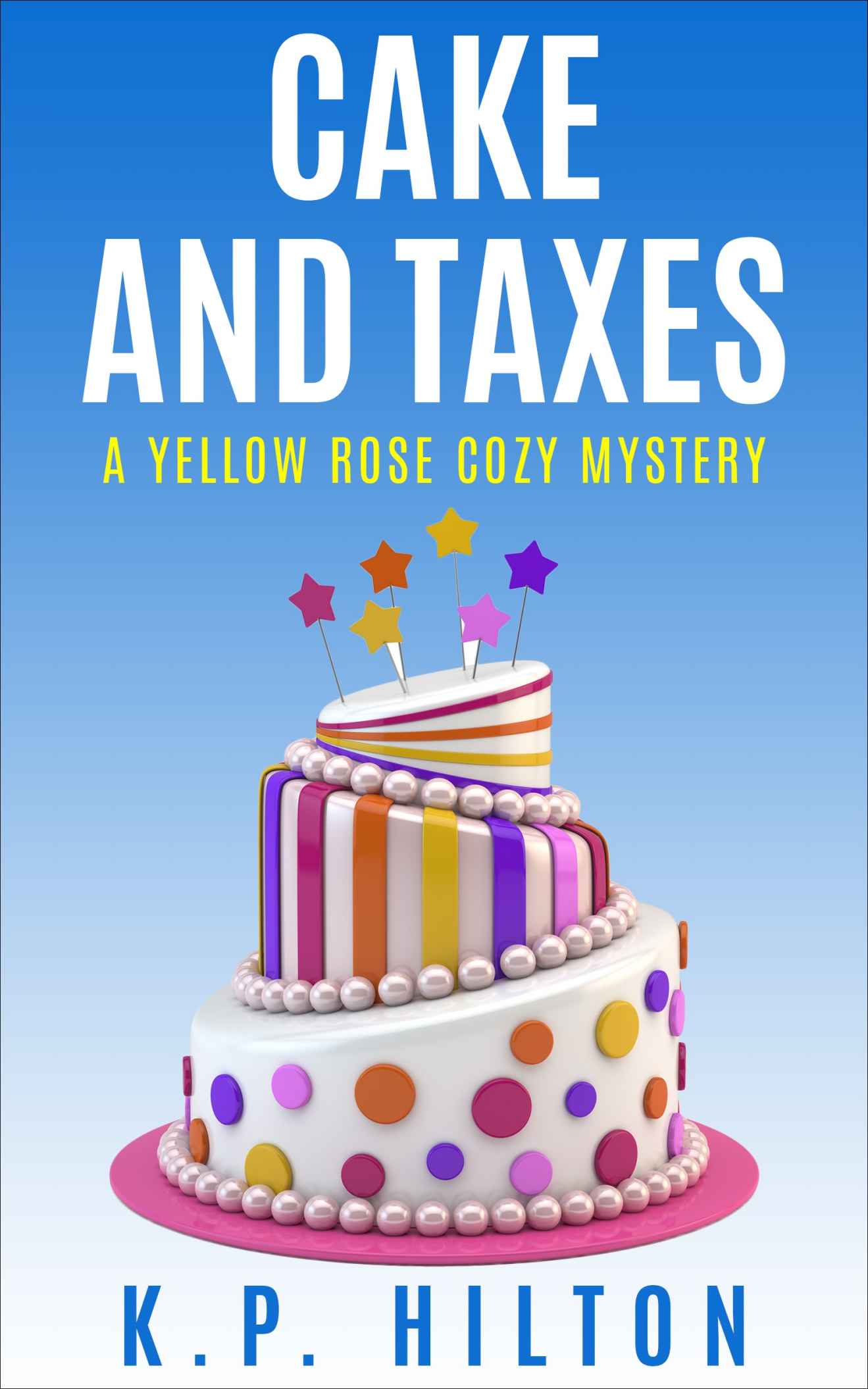 About CAKE AND TAXES

Betty Hitchens has successfully opened her bakery, Betty's Cakes. Sales are up, there's been no recent drama in her life, and even her cat has stopped bringing in mice from outside. But nothing good lasts forever.

When an appraiser from the local appraisal district is found dead in her car, the list of possible suspects grows by the minute. Others soon become victims of terrible outbursts seemingly connected to her death.

The police begin investigating, and a close friend of Betty's becomes one of the prime suspects. She's convinced of his innocence, but will the small town baker figure out who the killer is before disaster strikes again?

Before it's all over, Betty will need help from close friend and ex-reporter Martin Lane and the mysterious Ojudh. All of  whom eventually discover the old adage is true – that laws are like sausages, and it's better not to see how they're made. Or watch how they're enforced.

About CAKE AND TAXES

All rights reserved by the author. No part of this book may be reproduced, distributed, transmitted in any form or by any means, or stored in a database or retrieval system, without prior written permission of the author. This is a work of fiction. Names, characters, places and incidents are either products of the author's imagination or used fictitiously. Any resemblances to any persons, living, or dead, are completely coincidental.

Summer was well under way in Yellow Rose, TX. The schools were out, air-born allergens were lower than the year before, and sales were up at the bakery. Overall, business owner Betty Hitchens was having a good week.

Except that her latest creation was giving her fits.

A young couple in town was getting married and the bride's mother had ordered a cake. One with multicolored stripes and dots and stars on top and edible candies along the sides that looked like pearls. For some reason, that had been important to the woman.
Simple enough
, thought Betty. Except that the ingredients weren't cooperating.

Batter curdles had appeared on the first attempt at making the cake. Betty had solved that issue with beating the eggs more thoroughly before the next attempt. She also decided that the electric mixer was set at too high of a speed and adjusted it.

On the second attempt, though, the top crust had come out too hard. After some investigating, Betty realized the temperature was too high and the layers were cooked too close to the top of the oven. None of the problems were serious and she knew that adjusting to professional-quality equipment after working for years out of her kitchen at home would take some time. She was, however, ready for the learning curve to start flattening out.

She took a quick break and peaked out through the doorway to the front of the store. Fred Darby, a tall freckle faced young man, was straightening items in the display case. Soon, at nine o'clock, he'd unlock the door, signaling the beginning of another work day. Fred and his twin brother George took turns during the week working the front by helping customers and ringing up sales. They were each taking a summer break from their studies at the local community college. Brianna, Betty's daughter, was supposed to be helping her mother with the wedding cake but had said she was feeling under the weather and stayed at home that morning.

Betty stepped in and asked Fred if all was ready.

Betty nodded. “Did you catch the Cowboys game this weekend?”

Fred sighed. “I did. They played hard, but didn't quite pull it out this time.”

“They'll do better next week. There's still plenty of season left.” Betty was more of a UT fan, preferring college to professional football. But there were plenty of Cowboys fans around and she liked to be encouraging.

She returned to the kitchen area and cleaned up a little. After filling one of the trash containers, she pulled the plastic bag from within it and headed outside to the dumpster. As she was about to walk back inside, she heard an angry voice. She turned around and realized it was coming from someone standing in the alley behind Ned's hardware store, the storefront next to hers.

In fact, it was Ned's voice that she'd heard. He was talking to a professionally-dressed young woman who was wearing a short-sleeved red blouse, slacks, and matching shoes.
Betty realized it was Marge Nelson, the wife of a dear friend of hers. From the angle where they stood and with the intensity of the heated exchange that was occurring, Betty didn't think they had noticed her.

She started to return to her work inside, considering it bad form to listen in on other people's conversations when she had the option of moving out of earshot. People nowadays, especially the younger generation, didn't seem to have the manners and common sense that her generation did, in her opinion.

Still...there were several loose bricks near the back door that she had been meaning to fix. She could contact the building owner who was technically responsible for repairs. But it was such a minor thing she had decided to take care of it herself when she'd discovered the problem a few days ago.
And why put off again what I could take care of today?
she thought.

As she poked and studied the bricks in question, she could hear Ned's voice rise and fall. Occasionally there was a pause where Betty thought Marge was responding to Ned, but Betty couldn't be sure. Several moments later, the two finished up and went back inside Ned's Friendly Hardware Store.

Betty concluded her assessment of the loose bricks and decided a little mortar or similar compound would do the trick. She'd stop by and pick some up later in the day or maybe in the evening after she closed up. She returned to her duties inside her shop and, after washing her hands thoroughly, focused once again on her cake.

A little before four p.m., a man pushing a barrel on an upright dolly cart entered the shop. Martin Lane was a former newspaper reporter and currently ran a consulting business from his home. Since he was self-employed, he could arrange his schedule as he pleased and run errands for himself as well as others whenever he liked. A few days before, Betty had asked if he would pick up a few things for her store. He'd agreed since the two were good friends. Also, she tended to reward favors with cake and cake related treats. Which delighted Martin since he had a severe sweet tooth.

“A few more trips like this and you'll be in great shape,” Betty teased.

“I am in shape,” Martin replied, mopping his brow with a handkerchief. “Round is a shape.” After taking in several deep breaths of air and accepting a bottled water he said, “Where would you like this?”

A few feet over, a customer watched quizzically, but said nothing as Fred assisted her with her order.

“Over there in the corner. I've already cleared a spot,” Betty said.

Martin did as asked. He took the dolly outside, placed it in the trunk of his car, then brought in the domino set and handed it to Betty. “What made you decide to go 'old school'?”

Betty eyed the barrel, wondering if she should place some type of cloth over it. Ultimately, she thought it looked fine the way it was. “If by 'old school' you mean why am I putting in a game whose popularity peaked when Roosevelt was in office, the answer is two-fold.”

Martin sucked in his stomach and examined his profile in one of the display cases out of the corner of his eye as Betty talked. She pretended not to notice.

“First,” she continued, “it was a request from a customer. Bernie Mendleson made a joke about the store having everything he liked in a small bakery minus a place for him and Gus to play. Gus is getting on in years and doesn't like getting out of the house much since his wife died. Anyway, this apparently is one activity that can lure him out, which I think would be good for him.”

“Well, that was sweet of you.” Martin thought for a moment, snapped his fingers, then said, “Hey, maybe you could use this to build a theme for the bakery. You know, like some of the chain restaurants and other eateries.”

Betty laughed. “No, good food and friendly service are what I'm striving for. If I can consistently deliver that, I'll be happy.”

The customer finished up her order and exited the store. As she left, Martin looked over at Fred who was now wiping down the counter. “What are your thoughts there, young man?” he asked, addressing Fred. “Besides being a nice good will gesture, think this will help bring in more customers? Besides Bernie and Gus, I mean?”

Fred glanced over at Betty, gave the question some thought, then said, “Maybe. But if you're planning on expanding foot traffic you'd probably be better off adding Wi-Fi.” He gave a small shrug. “Just my opinion.”

“Hmm,” Betty said. “That is the trend nowadays. Though I'm not sure I'm up to it yet financially. Also, there's the space consideration here inside. I don't think we can squeeze any more tables in here.”

“There's no rush, Betty,” Martin said. “It was only a suggestion. Why don't you start slow, and after Bernie and Gus get tired of dominoes, you expand to checkers?”

Betty laughed. “That's an expansion I think I can handle.”

The storefront door opened again and two women stepped in. One was pale and immediately sat at one of the nearby tables. The other sat opposite her and repeatedly told her everything was going to be all right.

Betty and Martin looked at each other and then at the women, taken aback at the abruptness of their entrance.

A few seconds later, the second woman said, “I'm sorry for the intrusion. But my friend just received word that someone she knows was found dead in her car at work.”

“No apologies needed,” Betty said. “I'm so sorry. What happened?”

“I got a call from my friend at the appraisal district,” the first woman said. “One of the employees there, Marge Nelson, was found dead in her car.”

Betty took in a deep breath. “Oh, my goodness,” she said.

“Apparently, she was found in the district's parking lot,” Fred said. “Shot twice. Once in the head. Once in the chest.” He looked up from his cell phone to the stunned faces of the people around him.

“Umm, according to the social media site I'm reading from, anyway. Nothing official from the news sites,” he added quietly.