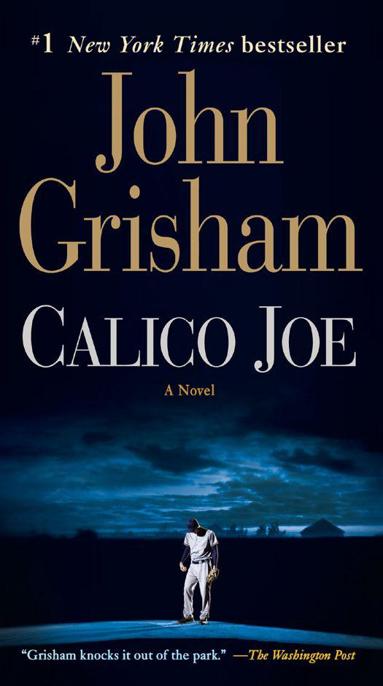 Calico Joe
is a work of fiction. Names, characters, places and incidents either are the product of the author’s imagination or are used fictitiously. Any resemblance to actual persons, living or dead, events, or locales is entirely coincidental.

Published in the United States by Dell, an imprint of The Random House Publishing Group, a division of Random House, Inc., New York.

Originally published in hardcover in the United States by Doubleday, an imprint of The Knopf Doubleday Publishing Group, a division of Random House, Inc., in 2012.

T
he tumor in my father’s pancreas was removed last week in an operation that lasted five hours and was more difficult than his surgeons had expected. Afterward, they delivered the grim news that most people in his condition could not expect to live for more than ninety days. Since I knew nothing of the surgery, or the tumor, I was not there when he was given his death sentence. Communication is not a priority with my father. Ten years ago he divorced one wife and had found another before word filtered down to me.

His current wife—she’s either number five or number six—eventually called and, after reintroducing herself, passed along the barest of details about the tumor and its related issues. Agnes explained that my father was not feeling well and didn’t want to talk. I replied that he had never wanted to talk, regardless of how he felt. She asked me to spread the news to the rest of the family. I almost asked “Why?” but didn’t want to bicker with this poor woman.

The rest of the family consists of my younger sister, Jill, and my mother. Jill lives in Seattle and, as far as I know, has not spoken to our father in at least ten years. She has two small children who have never met him, and never will. My mother, after surviving twelve years of marriage, got lucky and got out, taking Jill and me with her, and I have a hunch that the news of his impending death will have zero impact on her.

Needless to say, we do not get together at Christmas and exchange gifts by the fire.

After the phone call from Agnes, I sit at my desk and ponder life without Warren, my father. I started calling him Warren when I was in college because he was more of a person, a stranger, than a father. He did not object. He has never cared what I call him, and I have always assumed he prefers that I don’t call him at all. At least I make the occasional effort; he never has.

After a few minutes, I admit the truth—life without Warren will be the same as life with him.

I call Jill and break the news. Her first question is whether I plan to attend the funeral, which is somewhat premature. She wants to know if she should try to visit him, to say hello and good-bye and go through the phony motions of acting as though she cares, when in fact she does not. Nor do I, and we both admit this. We have no love for Warren because he never cared for us. He abandoned the family when we were kids and has spent the past thirty years acting as though we do not
exist. Jill and I are both parents now, and we find it inconceivable that a father can have no use for his own children.

“I’m not going,” she finally declares. “Now, or later. How about you?”

The truth is that I know I will go see him. He has burned most of the bridges in his life, but there is one rather substantial piece of unfinished business that he has to deal with before he dies.

My mother lives in Tulsa with her second husband. In high school, Warren was the superjock, and she was the homecoming queen, the most popular girl. Their wedding thrilled their small town, but after a couple of years with Warren all thrills were gone. I know they have not spoken to each other in decades, and why should they?

“Mom, I have some bad news,” I say into the phone, trying to seem sufficiently somber.

“What is it?” she asks quickly, probably afraid it is one of her grandchildren.

“Warren’s sick. Pancreatic cancer, he has less than three months to live.”

A pause, relief, then, “I was assuming he was already dead.”

And there you have it. His memorial service will not be packed with grieving family members.

“I don’t want to be bothered with it, Paul, just call me when it’s over. Or don’t. I don’t care what happens to Warren.”

I know he hit her a few times, probably a lot more than I realized. And he drank and chased women and lived the hard life of a professional baseball player. He was arrogant and cocky, and from the age of fifteen he was accustomed to getting whatever he wanted because he, Warren Tracey, could throw a baseball through a brick wall.

We manage to move the conversation to the kids and when she might see them again. Because of her beauty and brains, she landed on her feet after Warren. She married a slightly older man, an executive for a drilling company, and he provided a fine home for Jill and me. He loves my mom, and that’s all that matters.

I doubt if Warren ever did.

I
n the summer of 1973, the country was slowly emerging from the trauma of Vietnam. Spiro Agnew was in trouble and would eventually go down. Watergate was getting hot with much more to come. I was eleven years old and slightly aware of what was happening out there in the real world, but I was wonderfully unburdened by it. Baseball was my world, and little else mattered. My father pitched for the New York Mets, and I lived and died with each game. I pitched too, for the Scrappers in the White Plains Little League, and because my father was who he was, great things were expected of me. I rarely met those expectations, but there were moments of promise.

By early July, the pennant race in the National League East had settled into a bland contest. All six teams—Mets, Pirates, Cardinals, Phillies, Cubs, and Expos—were hovering around .500 and showing little enthusiasm for making a run. In the West, the Reds and the Dodgers were pulling away. In
the American League, the Oakland A’s, with their swagger and colorful uniforms and long hair, were looking to repeat their championship of 1972.

My buddies and I followed the game religiously. We knew each player and every statistic. We checked every box score, then replayed the games on the sandlots of White Plains. Life at home was not always pleasant, and my escape was on the field. Baseball was my best friend, and in mid-July 1973 the game was about to be electrified like never before.

It began quietly enough with a pulled hamstring. The first baseman for the Cubs AAA affiliate in Wichita went down as he rounded third and headed for home. The next day, Jim Hickman, the first baseman for the Cubs, injured his back. The team suddenly needed someone to play first, so they reached down to their AA club in Midland, Texas, and called up a twenty-one-year-old named Joe Castle. At the time, Castle was hitting .395 with twenty home runs, fifty RBIs, forty stolen bases, and only one error at first base. He was the hottest player in AA and was creating a buzz.

As the story goes, Castle was asleep in the cheap apartment he shared with four other minor leaguers when the call came from Chicago. An assistant coach drove him to the airport in Midland, and he caught a flight to Houston, where he waited two hours for a flight to Philadelphia. While he waited, he called his family in Arkansas with the thrilling
news. When he arrived in Philadelphia, a cab delivered him to Veterans Stadium, where he was quickly fitted for a uniform, given Number 42, and hustled onto the field. The Cubs were already taking batting practice. Understandably, he was nervous, thrilled, almost bewildered, and when the manager, Whitey Lockman, said, “Get loose. You’re starting at first and hitting seventh,” Castle had trouble gripping his brand-new bat. In his first round of major-league batting practice, he swung at the first two pitches and missed.

He would not miss again for a long time.

In the dugout before the game, he huddled with Don Kessinger, the Cubs veteran shortstop and another Arkansas boy. Kessinger had been an all-American in baseball and basketball at Ole Miss and was outgoing and laid back. He managed to keep the kid loose. His only advice was “Go up there swinging.” The Cubs center fielder was Rick Monday, another veteran who had been born in Batesville, Arkansas, just down the White River from Joe’s hometown. Between Kessinger and Monday, Joe managed to survive the worst case of pregame jitters a player could imagine.

It was Thursday, July 12, a day baseball would remember for a long time.

The Phillies pitcher was a lefty, Benny Humphries, a wild fastballer who walked as many as he struck out. As Joe strolled to the plate in the second inning, he gritted his teeth and again told himself to swing at the first pitch, wherever it happened to be. Humphries thought the rookie should get introduced to
major-league heat and unloaded everything he had. Joe, from the right side, guessed fastball, made perfect contact, and hit a shot that landed twenty rows back in left center field. He sprinted around the bases, much too excited for any kind of victory trot, and was in the dugout being congratulated before he caught his breath.