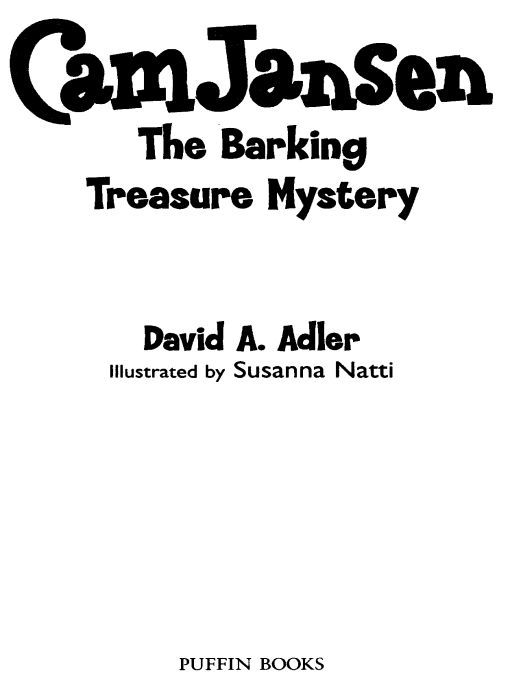 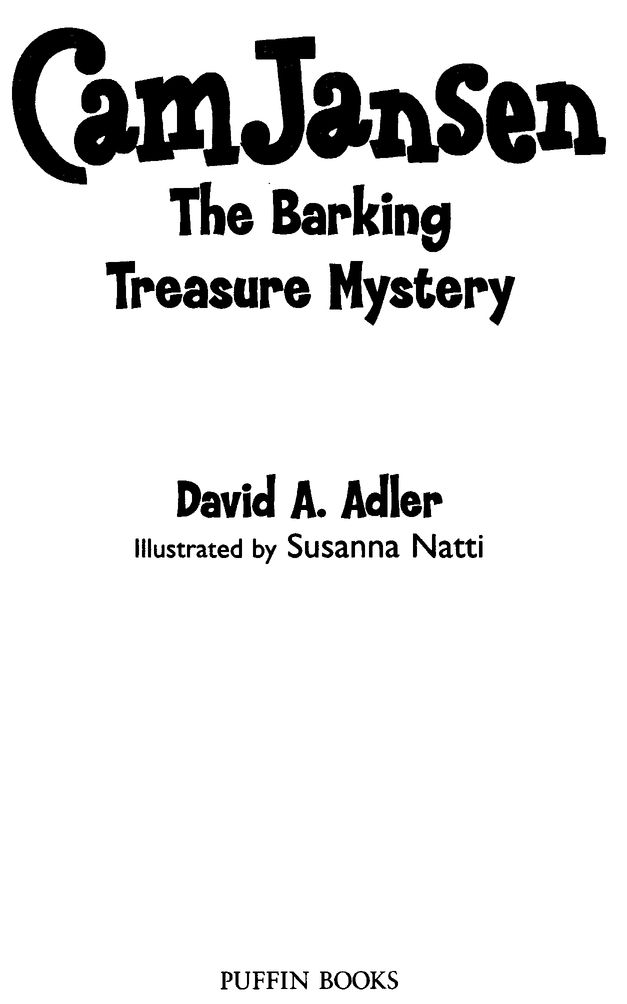 Chapter One
“
T
he frog,” Mabel Trent said, and laughed. “Do you remember the frog?”
Mrs. Shelton laughed, too. “Of course I remember it. It jumped out of your desk and scared Miss Donovan.”
“Poor Miss Donovan,” Mabel Trent said. “She dropped her books and yelled at the frog, ‘Get out of my class!”’
Mrs. Shelton laughed. “And you put cream cheese in Mr. Casper’s jar of white paint,” she said. “You sure did some crazy things.”
Cam Jansen whispered to her friend Eric Shelton, “She must have gotten into lots of trouble in school.”
“Mom wouldn’t laugh if I did those things,” Eric said. “She would punish me.” 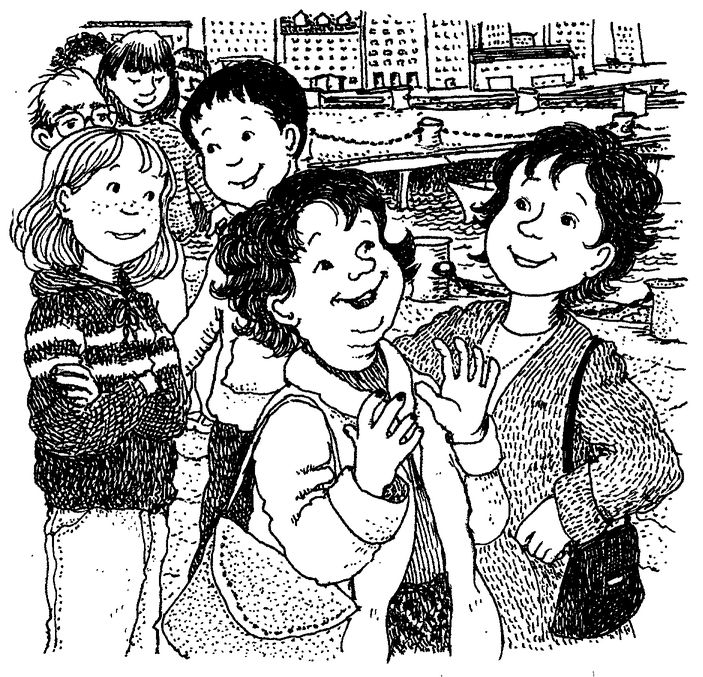 When Mabel Trent was in sixth grade, her family had moved far away. But she and Eric’s mother were still good friends. Now she was visiting the Sheltons. They were waiting in line for a boat ride around the city.
“Look,” Eric said. He pointed to a sign. It listed the sights they would see on the ride and the rules for passengers. “Near the end of the ride, we see a pirate ship that is 200 years old.”
“I want to remember this list,” Cam said. Then she blinked her eyes and said, “Click.”
Cam has an amazing photographic memory. It’s as if she has a camera in her head, with photographs of whatever she has seen. Cam says
“Click”
whenever she wants to remember something. She says it’s the sound her mental camera makes.
Cam’s real name is Jennifer. But when people found out about her amazing memory, they called her “The Camera.” Soon “The Camera” became just “Cam.”
Mrs. Shelton bought four tickets. Then they waited in line to go on the boat.
“You’ll love this ride, Little Treasure,” the woman in front of them told the small gray poodle in her arms. Then she told the short, bald man in front of her, “I call her Little Treasure because that’s what she is.”
The woman was wearing a long red dress and lots of expensive jewelry. She carried a large, red leather bag. Little Treasure’s collar was red and had jewels in it.
Cam closed her eyes and said,
“Click.”
“What are you doing?” Eric asked.
“I’m looking at the picture I have of that sign,” Cam whispered, with her eyes still closed. “And rule number six says, ‘No animals allowed.”’
Cam opened her eyes and said, “They won’t allow Little Treasure on board.”
The line moved forward. A man in a sailor uniform was taking tickets.
“I’m sorry,” he told the woman in the red dress, “but animals are not allowed.”
“This is not an animal,” she said. “She’s my Little Treasure.” 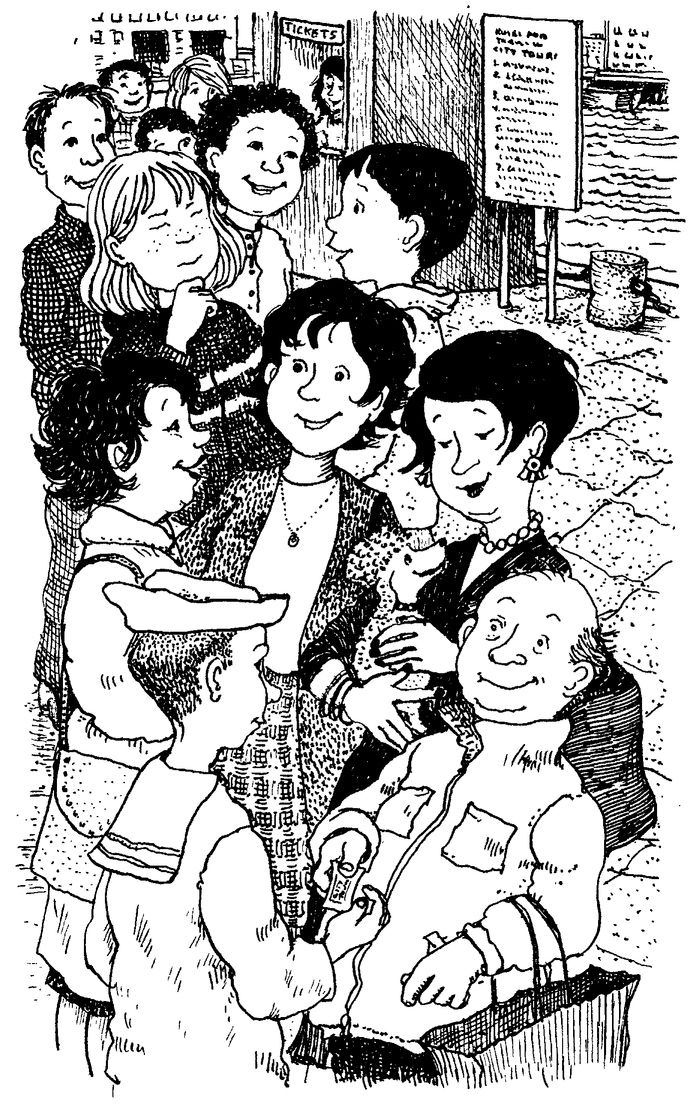 “Well, she looks like a dog and dogs are not allowed.” Then he said, “Next.”
Mrs. Shelton gave him the tickets. Then she, Mabel Trent, Cam, and Eric walked onto the deck of the boat.
There were benches outside, along the rail of the deck. There was a covered area, too, with seats and a snack bar.
The boat was crowded. Most of the seats were taken.
“Please, could you move down,” Mabel Trent asked a thin man with a bushy beard. He was sitting on a bench by the rail.

Cracked by Barbra Leslie
Abby's Heart (Bryant Station Curves) by Rachels, Rayne
The Changeling Bride by Lisa Cach
Sweet Cheeks by K. Bromberg
At the Edge of the Sun by Anne Stuart
My Expectation (My Escort Series Book 3) by Kia Carrington-Russell
Disarranged by Wolf, Sara
By Myself and Then Some by Lauren Bacall
Interview With a Jewish Vampire by Erica Manfred
I'll Walk Alone by Mary Higgins Clark