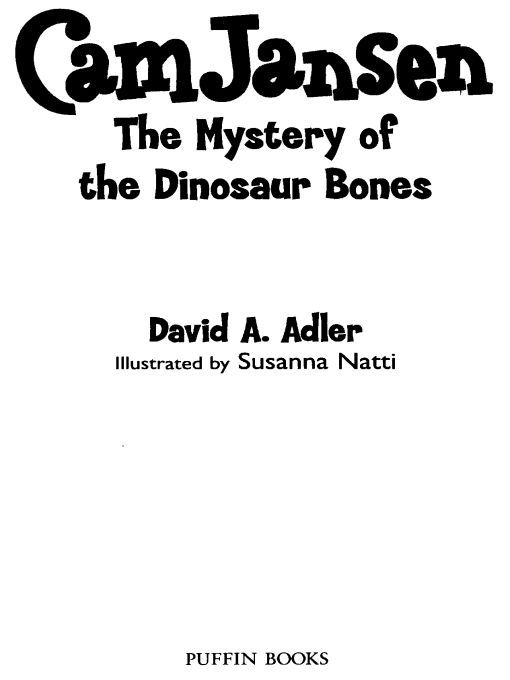 Table of Contents
Dedication
Copyright Page
Title Page
Chapter One
Chapter Two
Chapter Three
Chapter Four
Chapter Five
Chapter Six
Chapter Seven
Chapter Eight
Chapter Nine
Something doesn’t seem right.
Then the guide led the class to another dinosaur skeleton.
“This is the skeleton of a Coelophysis,” the guide said. “Seel-o-fy-sis,” she said again slowly.
Cam was busy studying the dinosaur’s tail.
“Something is wrong,” she whispered to Eric.
Cam closed her eyes and said,
“Click.”
She kept them closed for a while. Then she looked again at the dinosaur’s tail.
“I was right,” Cam said to Eric. “Something is wrong. Three of the dinosaur’s bones are missing.”
The Cam Jansen Adventure Series 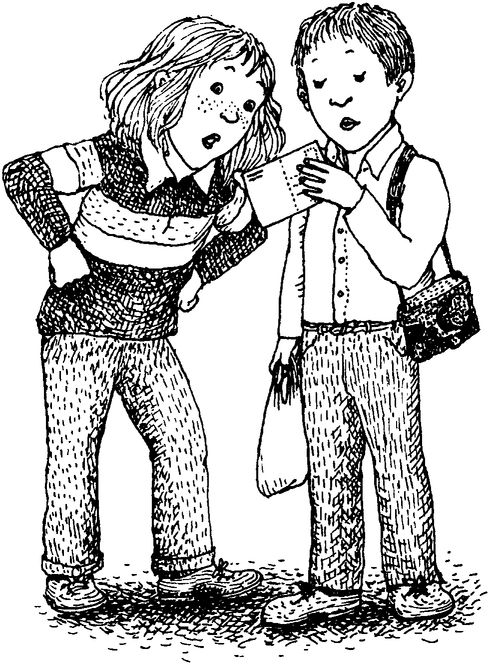 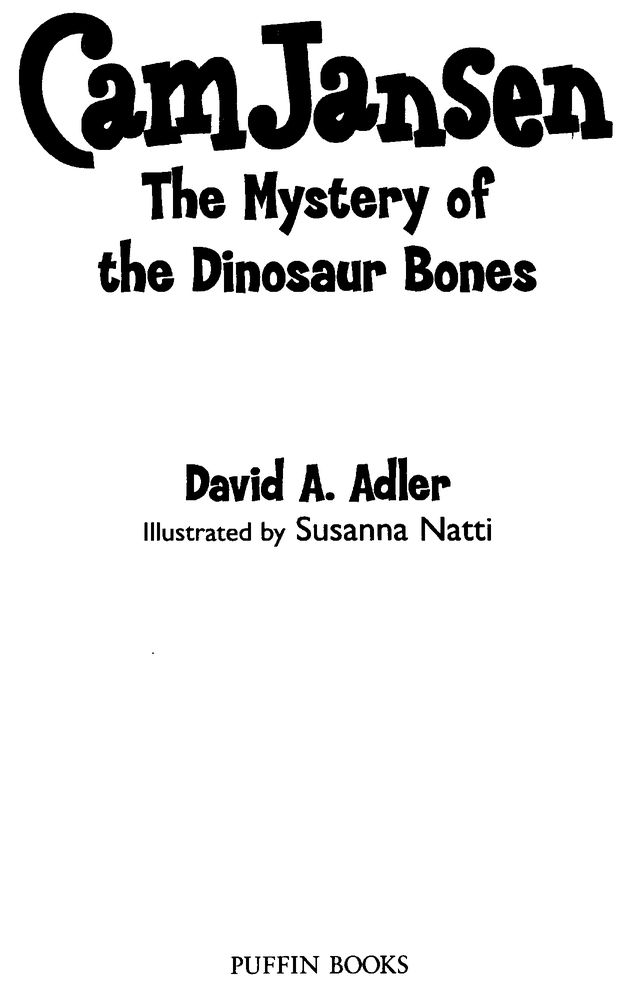 Chapter One
“Slurp.
”
Cam Jansen was drinking milk through a straw. She tilted the container to get the last few drops.
Cam was eating lunch in the cafeteria of the Kurt Daub Museum. She was there with her fifth-grade class. Her friend Eric Shelton was sitting next to her.
Cam pointed to the teacher. The teacher was standing on a chair with a finger over her mouth.
“Look,” Cam said to Eric. “Ms. Benson is waiting for us to be quiet.”
“Our tour will begin in twenty minutes,” Ms. Benson said. “But first I must ask those of you who brought cameras along to keep your cameras in their cases. The taking of photographs in the museum is not allowed.” 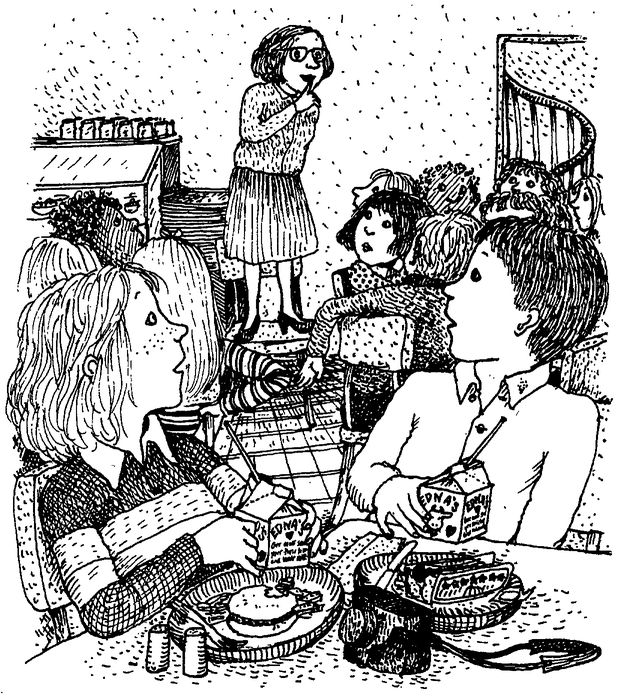 Ms. Benson got down from the chair.
“See,” Cam said to Eric, “I told you not to bring your camera. Last time I was here someone was told to leave the museum because he was taking pictures.”
“Well,” Eric said, “maybe I can’t take pictures, but you can. Take a picture of me now with your mental camera.”
Cam’s mental camera is her memory. She can take one look at a page in a book, close her eyes, and remember every word on the page. “It’s easy for me,” Cam often explained. “I have a photograph of the page stored in my brain. When I want to remember what I saw, I just look at the photograph.”
When people found out about Cam’s amazing photographic memory, they stopped using her real name, Jennifer. They started calling her “The Camera.” Soon “The Camera” was shortened to “Cam.”
Cam looked straight at Eric and said,
“Click.”
She always said,
“Click,”
when she wanted to remember something. Cam says that
“Click”
is the sound her mental camera makes when it takes a picture.
“Close your eyes,” Eric said. “Now what do you remember?”
Cam thought for a moment. Then she said, “There’s a drop of mustard on your collar. You should wipe it off!”
Eric looked down. There
was
a drop of mustard on his collar. He took a napkin and wiped it off.
“On the side of the milk container you just bought,” Cam went on, “it says, ‘Edna’s. Our cows send you their love and their milk.’
“You’re wearing a blue shirt. The top button of the shirt once came off and someone sewed it back on.” 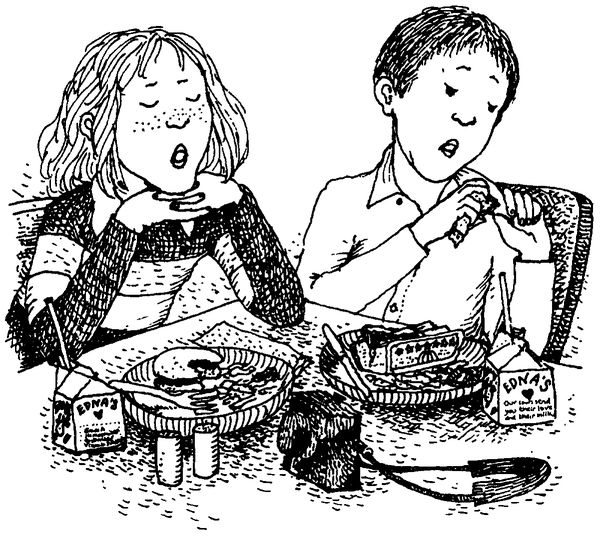 “You’re right,” Eric said. “But how did you know about the button?”
Cam opened her eyes. “It’s the thread,” she said. “I remembered that the top button was sewn on with white thread. The other buttons have light blue thread.”
Ms. Benson was standing on a chair again. She said to the class, “Clean your tables and then get into a double line.”
Cam and Eric quickly threw away the empty milk containers and the wrappings from their lunches. Then they got in line.
Ms. Benson led the class up the stairs to the museum lobby. They were met there by a young woman in a purple dress.
“I’m Janet Tyler,” the woman in the purple dress said. “I will be your guide. Please stay together and follow me.”
The guide led the class to the Air Travel room. She pointed out the models of the earliest flying machines. There was a full-size model of the 1903 Wright brothers’ airplane.
Ms. Tyler took the class to a weather station room with a solar energy exhibit. Then she led the class into a large room with a very high ceiling. 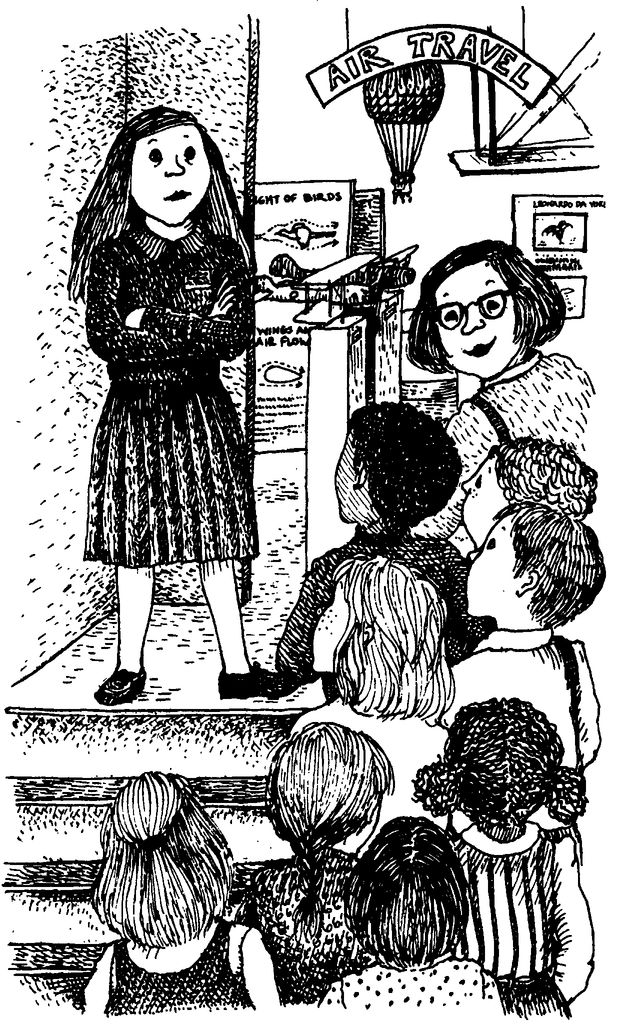 “This next exhibit is my favorite,” the guide told the class.
“Mine, too,” Cam whispered to Eric.
Chapter Two
The class followed the guide into the room. Glass cases filled with old tools, bones, rocks, and photographs lined the walls. On a platform, in the center of the room, was part of the skeleton of a very large dinosaur, the Brachiosaurus. Some of the bones from the skeleton were lying on the platform. The wires had come loose and the skeleton was being repaired.
“This is the skeleton of a Brachiosaurus. Brake-e-o-sawr-us,” Janet Tyler said again slowly so everyone could hear how the word was pronounced. “The Brachiosaurus was the biggest dinosaur. It weighed over fifty tons. That’s more, I’m sure, than all the children in your whole school weigh together.”
Then the guide led the class to another dinosaur skeleton. It was much smaller than the Brachiosaurus. Its mouth was open and its hands were stretched out as if it were ready to grab something to eat.
“Look at those teeth,” someone in the class said.
“And look at that tail. It’s so long and pointy.”
“This is the skeleton of a Coelophysis,” the guide said. “Seel-o-fy-sis,” she said again slowly. “Now you may know about some dinosaurs, but I’m sure no one knows anything about the Coelophysis.”
“I do,” Cam said.
Everyone turned to look at Cam. They were surprised that she knew about the Coelophysis. Ms. Benson had never mentioned it when she taught the class about dinosaurs.

The Dark Beyond the Stars : A Novel by Frank M. Robinson
Wartime Wife by Lane, Lizzie
Ghost Program by Marion Desaulniers
The Sable Quean by Jacques, Brian
Shades of Temptation by Virna DePaul
Tempt Me by Shiloh Walker
Fudge-Laced Felonies by Hickey, Cynthia
Margaret Beaufort: Mother of the Tudor Dynasty by Elizabeth Norton
Vin of Venus by David Cranmer, Paul D. Brazill, Garnett Elliott
Blood Legacy: The Story of Ryan by Hawkins, Kerri