Authors: A Knight of Silence 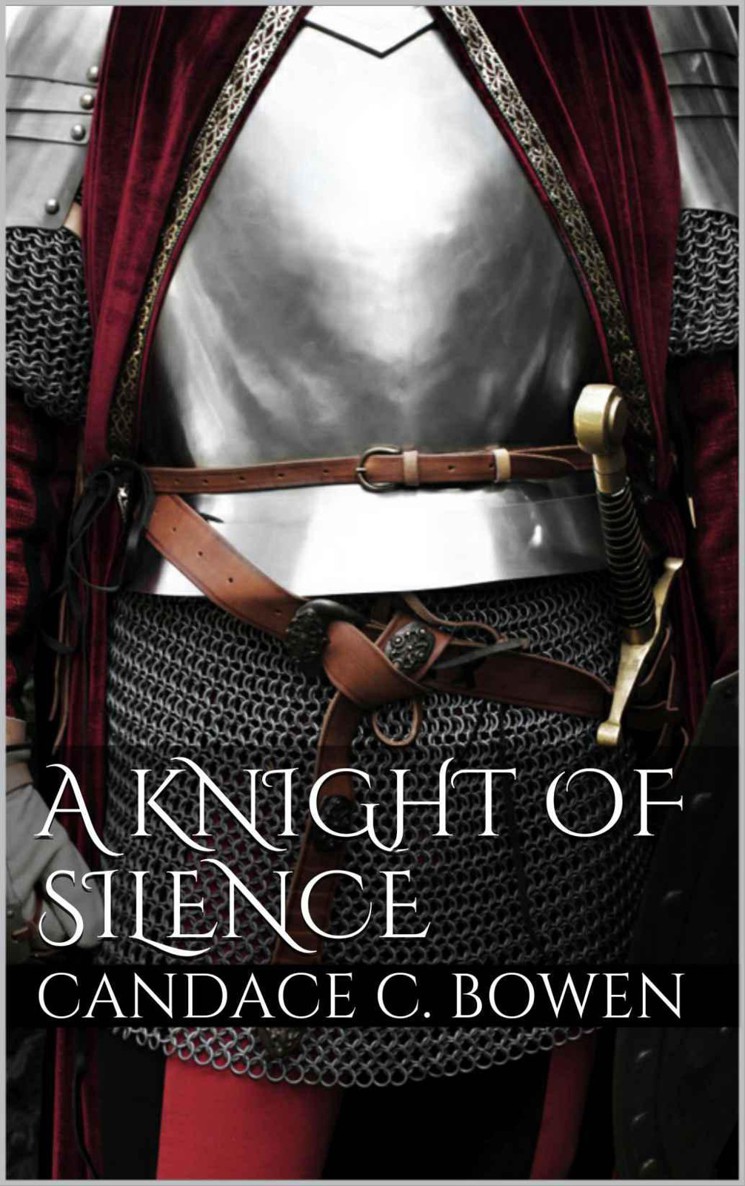 A KNIGHT
OF SILENCE

This ebook is licensed
for your personal enjoyment only. This ebook may not be re-sold or given away
to other people. If you would like to share this book with another person,
please purchase an additional copy for each person you share it with. If you’re
reading this book and did not purchase it, or it was not purchased for your use
only, then please return to Smashwords.com and purchase your own copy. Thank
you for respecting the hard work of this author.

The battle was over. King Henry I of England stood victorious over King
Louis VI “the Fat” of France. Once again forced to defend his dukedom of
Normandy, in triumph he surveyed the battlefield. Rejoicing in his God-given
victory, he proudly held the banner of the defeated king, waving it over his
head for all to see.

Leaving his retinue, King Henry
paced alone through the prisoners, searching for French knights of high rank
who would be able to pay a hefty sum to purchase their freedom.

As Henry turned away from one set of vanquished knights, they scrambled
to their feet, sprinting towards his unprotected back.

Fulke’s English broadsword clanged against French steel as he fought
his way to King Henry’s side. Hacking his way through the group of defiant
French knights surrounding the king, he roared with rage as his sworn enemy
William Crispin raised his sword, striking the back of the king’s helm. The
king fell forward from the force of the blow, saved by the hauberk protecting
his neck.

Before he could strike again, Fulke lunged forward. Tackling Crispin,
he drove him face first into the ground. Kicking the stunned knight’s sword
away, he drove a knee into his chain-mailed back, raising his sword to strike.

“Nay, slay the traitor,” the king’s kinsman, Walter of Auffay called.
“He turned against King Henry to advance his own interests.

Any Norman loyal to King Louis is deserving
of death.”

Straightening, Fulke moved aside. His sword pointed at Crispin.

He lowered it in surprise when Roger flung himself over the prostrate
Crispin, shouting, “Out of fear of God’s wrath, in the name of fellowship in
arms, his blood shall not be spilled this day.”

Angry English knights moved in to surround the prostrate pair. “Crispin
charged the king after Fat Louis fled like a coward. I say his life is
forfeit,” Walter called.

His eyes
leveled on the group of re-captured French knights.

“Would you risk your immortal soul, Walter?” Roger glanced around at
the crowd of angry men surrounding him. “Would any of you?”

“Aye, I would,” Fulke replied. “He struck a blow to the king’s back
after the battle. I say Crispin’s life is forfeit.”

“What goes here?” The booming voice had them turning to bow as King
Henry stepped forward.

Walter addressed the king. “Sire, we believe Crispin has forfeited his
life for the attack on you. Young Roger appears to deem otherwise.”

Removing his dented helm, the king tossed it aside.

Brushing absently at his stained tunic, he
turned his cold stare on Roger.

“You
demean yourself before the enemy, rise.”

Scrambling to his feet, Roger said, “Sire, we captured the bulk of
Louis’ knights. The rest we routed to the gates of Andely. We have reports that
only three men fell this day, I beseech you not to make it four.”

“We shall see.” The king shifted his gaze to Crispin. “Rise and face
me, churl.”

Crispin stood boldly before the king as Fulke stepped forward to press
his sword to the small of his back.

Seething with hatred, Crispin braved, “Do your worst, usurper.”

The king sneered, “I see you champion the mislaid cause of my older
brother, Robert.”

“I champion the cause of his son, William Clito. The rightful Duke of
Normandy,” Crispin replied proudly.

“William, my brother’s son, who even as we speak flees through the
forest to escape my wrath?”

“His father, the rightful King of England has been wrongly imprisoned
for seeking what is his by right of succession.

Rumor has it, blent by your command.

Would you have William wait for you to thrust a hot iron poker into his
eye-sockets?”

The king’s hand dropped to the hilt of his sword. “Speak no more to me
of which you know not. Your bravery in facing me is the only thing that saved
you this day.”

Glaring at Crispin with
contempt, the king called, “Place him under guard with the rest.

Perhaps my nephew will pay a hefty sum for
his return.”

“Thank you, Sire.” Drawing his sword, Roger motioned for Crispin to
precede him.

Keeping a watchful eye on the pair, Fulke reluctantly sheathed his
blade.

The king spoke to the remaining knights. “Louis rode off into the
forest with Baudry of Bois. Seek them out.”

Fulke prepared to follow the scrambling men when the king held up his
hand to stay him. “Not you.”

“You have come to my notice prior.” Taking in Fulke’s imposing frame.
“What is your name?”

Sliding his sword from its scabbard, the king stepped forward.
"Kneel before me, Fulke."

Removing his helm, Fulke knelt in the dirt at Henry’s feet.

Lowering his head, King Henry briefly rapped
him on each shoulder with the flat of his broadsword. “Rise, Sir Fulke.”

“Thank you, Sir Fulke.” The king acknowledged with a curt nod.

Surrounded by his kinsman to thwart another attempt on his life, the
king made his way from the battlefield.

Fulke surveyed the remaining groups of captured knights for any sign of
trouble, before he swung around to find his childhood friend grinning at him.
“There will be no living with you after this day.”

“So glad you could join me Albin,” he scowled.

“Are you in earnest, Fulke?

It
was I, keeping French steel from your back.”

Albin stared hard at him. “The battle's outcome has displeased you.”

“Aye,” he scoffed. “Warriors do not capture their sworn enemies, they
kill them.

I find no cause to be
pleased.”

Albin shook his head in disbelief. “You bemoan the fact your sword is
not stained with the lifeblood of our brothers, yet the king himself has
knighted you on the field of battle.”

“I took part in no battle of valor this day, and I bemoan the fact that
our sworn enemy has lived to fight another day,” he shot back.

“Born in Yorkshire, King Henry is English, as are we. Anyone who raises
a hand against my king or country is my sworn enemy.”

“Even if the one you speak of is a true brother?” Albin asked in
disbelief.

Pain made his words sharper than he intended. “You above all, know that
to be impossible. Yet, with your own brother siding with Clito, I well
understand your reasoning.”

Removing his helm, Albin let the matter drop. “The prisoners are to be
moved to Noyon until they are ransomed.

We are charged with returning to the coast.”

“Very well. Where did you last see my horse?”

Albin ran a calloused hand down his bearded jaw. “The arrow wound to
the neck proved fatal.

I am sorry,
Fulke.

I know you trained him from a
colt.”

Turning away, Fulke surveyed the scores of dead horses strewn on the
field of battle, their lifeblood staining the soil red. “It may prove difficult
to find another.”

“That is all you have to say on the matter?” Albin lightly pressed.

“Aye, Albin. That is all.” Stalking off, he picked his way past
soldiers removing trappings from the fallen horses.

Finding his horse, his lips tightened into a grim line. Squatting
beside the noble beast, he ran his fingers through the chestnut mane.

“For a silver denier, I can lead you to a fitting proxy.”

He stood to face a malnourished young waif dressed in rags. His bare
feet stained with blood.

Fulke quirked a brow. "What do the rest call you?"

"The ladies call me insatiable," he grinned.

Ignoring the attempt at humor, Fulke asked, “Tell me Guy, why is it
that you are not in service to the king?"

Guy shrugged. “I am beholden to none, and go where I desire.”

“In other words, you are a wandering beggar.”

“I have known no other way.

If
the way I live offends you, I shall take my bid elsewhere.”

Exasperated, Fulke called him back. “Show me this horse.”

He followed Guy towards the woods thick with imposing oak, beech and
chestnut trees.

In the shadows of the battlefield, concealed by evergreen shrubs of
maquis, stood an imposing black destrier tethered to a tree.

Recognizing the trappings of William Crispin, he grinned. “Lead him
out.”

“By the looks of you, it will cost me twice your worth to feed you,” he
grumbled, striding through the brush back to the field.

“Does this mean you will train me?” Guy called after him.

“It would appear so,” he responded, without bothering to turn around.

He guided the horse through the underbrush as Guy caught up to him.
“You will not regret it, Sir.

I spout a
fair sonnet.”

Fulke stopped in his tracks, his look incredulous. “That will assist
during a battle, how?”

Guy cocked a brow. “It does well on the village lasses.”

Rolling his eyes, Fulke stalked from the tree line.

A burrowing marmot raised its head at his passing, before scurrying for
cover in the thick underbrush.

Albin met them on the field.

Eyeing Crispin’s horse, he crossed his arms before him.

“I see it did not take you long to find a
proxy.”

“Guy here offered him up,” Fulke replied. Bending to remove the
trappings from his horse.

Finished with his task, Fulke lifted the saddle from his once noble
beast. “He returns with us to England.”

Albin grinned. “Taking in another stray, are we?”

“I believe a half score, seven.”

“It is nothing to be ashamed of, lad,” Fulke cut in.

“Just when you have me believing your heart to be made of stone, you
astound me."

Shrugging off his hand, Fulke dumped the saddle into Guy’s arms.

“See if you can barter for a pair of boots.”

Grabbing the reins to Crispin’s horse, he slanted his gaze to
Albin.

“Clean him up before getting him
something to eat.”

“Your wish
is my command, my liege.”

William Adelin, Prince of England, recently acknowledged Duke of
Normandy, celebrated the day. More than a year after the Battle of Bremule,
King Louis acknowledged his claim to Normandy over that of his cousin, William
Clito.