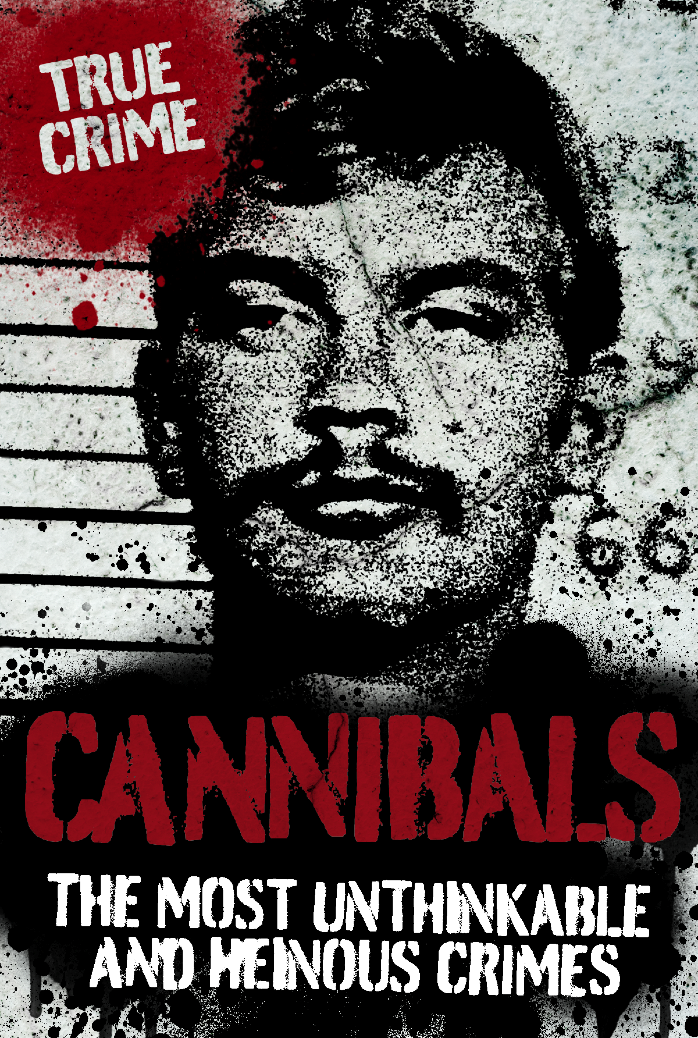 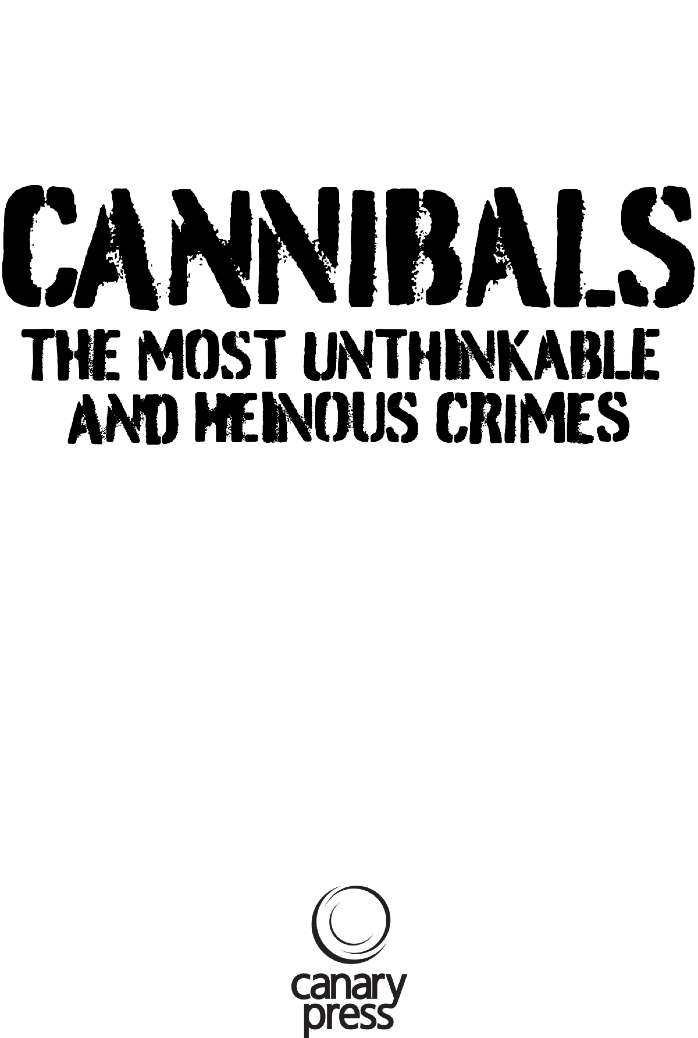 Born to be Killers

The World's Most Evil People

People Who Changed the World

Timeline of Kings and Queens

SECTION ONE: CANNIBALISM AROUND THE WORLD

The Crew of the Essex

Cannibalism in the Congo

The Team From Hell

Cannibalism, or anthropophagy, is the eating of human flesh by another human, in other words the eating of its own kind. The word actually comes from the Arawakan language name for the Carib Indians of the West Indies because they were well known for their practice of cannibalism. The same word is used in the animal kingdom and means the eating of a species by a member of the same species. For example, wolves will often eat each other when they are desperate for food.

Cannibalism among humans, as repulsive as the idea may seem, has been widespread in prehistoric and primitive peoples on all continents, and the practice is still believed to exist in remote areas of New Guinea.

Androphagi – the Greek word for ‘man-eaters’ – were an ancient tribe of cannibals who lived north of Scythia, possibly in the forests between the upper waters of the Dnieper and the Don. Scythia was a region which stretched from from the Altai region where Mongolia, China, Russia and Kazakhstan come together to the lower Danube river area and Bulgaria. The Androphagi were most likely Finns, and their manners were more savage than those of any other race. They did not observe any form of justice, or indeed governed by any laws. They were nomads, and the language which they spoke was peculiar to their tribe, but most of all they were true cannibals.

Archaeologists from Bristol University uncovered evidence of prehistoric cannibalism in the year 2001, when they were investigating a cave at Alveston, South Gloucestershire. The archaeologists had been working with a local caving group when they discovered numerous bones about ten metres below ground level. Carbon dating suggests that they were buried around 2,000 years ago at the very end of the Iron Age, or possibly the beginning of the Roman occupation. The remains of at least seven individuals were uncovered, and at least one had been murdered as the back of the skull showed that it had been smashed with a heavy instrument. The most interesting find was an adult human femur which had been split lengthwise and the bone marrow had been scraped out. This was considered to be very good evidence that there had been some form of cannibal activity. Archaeologists had suspected some form of Iron Age cannibalism for some time, but this was the first piece of strong evidence they had found.

Of course there may be many reasons why people practice cannibalism. It could be because there simply wasn’t enough food for survival, or perhaps certain groups of people developed the taste for human flesh. However, it was normally to do with revenge or punishment for crimes, ritualistic ceremonies or sometimes magic. Particular tribes used to eat the bodies of their enemies as a form of triumphant victory. Other groups would eat the bodies of their dead relatives as a form of respect, believing that their spirits would continue to live inside their own bodies; this is known as endocannibalism. Human bodies used as sacrifices to the gods would have parts of their torso removed and eaten to identify their divine status.

The Wari tribe in the Amazon rain forest practised cannibalism until the late 1950s. The Wari were known to eat both their enemies and their own dead relatives. The eating of enemies was probablly just an act of contempt, very similar to a murderer eating his own victim. However, the eating of their dead relatives was done for a very different reason – respect. Burial was abhorrent to the Wari, so in an effort to destroy the memory of the once-living, all the belongings of the dead person were destroyed, including their own flesh. The Wari believed that by eating their dead and destroying their property that their ‘spirit’ would no longer haunt them or familiar places. The spirit of the dead was then free to be reborn and roam the forest as a peccary (type of pig). If times became really tough for the Wari, the peccary would return to the village and allow itself to be killed for food, subsequently ensuring Wari survival. It was the research carried out on the Wari tribe that gave anthropologists a further insight into cannibalism.

Of course, even civilized people have had to resort to cannibalism under desperate circumstances, just as a means of staying alive. The case that is probably the most well known is the Donner party that took place in America in the 19th century. A group of 90 immigrants being led by George Donner were caught in a blizzard high up in the Sierra Nevada mountains of California in October 1846. The survivors, who eventually made their way out in early 1847, had resorted to eating the flesh of their dead friends in order to remain alive. A more recent case happened when an airline crashed in a remote area of the Andes in the 1970s, once again the surviving passengers had to resort to cannibalism.

In modern times, the murder of a person for the purpose of eating their flesh is of course considered to be criminal cannibalism. However, in many parts of the world, indeed in Britain and the United States, cannibalism is not considered to be a felony and the perpetrator would have to be charged with a crime related to this act, for example murder, grave robbery or necrophilia.

Other cultures often consider the act of criminal cannibalism as an acceptable element of their customs. For example, tribes in Papua New Guinea allegedly consumed their Japanese enemies during World War II, which was an admissible part of their culture.

Of course we don’t like to believe that cannibalism still takes place today, but there is much evidence to show that it does still happen and with more regularity than we dare believe. There have been many reported instances of cannibalism within the last hundred years and this book will outline some of the more well-known cases.

There are four primary areas of criminal cannibalism: sexual, aggressive, nutritional and spiritual/ritual. In sexual cannibalism the person may indulge in the eating of human flesh in order to reach a more intense and satisfying sexual climax. With aggressive cannibalism they may consume the flesh to achieve a sense of power and control, whereas in nutritional cannibalism the person eats it purely because they have come to love the taste. Finally in the spiritual or ritual form, the person will eat the flesh of another so that they can be as one with their deity. The technical term for the consumption of a god’s body and blood is ‘theophagy’ and it has been considered a religious experience worldwide for thousands of years.

There are many theories about what would lead a person to commit criminal cannibalism, but perhaps the basic framework suggested by psychologists will help to understand this strange phenomenon.

One belief is that it could be the result of a trauma, especially one that is experienced in early childhood. In rare cases where a child has problems with weaning from its mother’s breast, they may experience anxiety and fantasize about devouring the mother, or, in other words, oral aggression. It is possible that a child who has become excessively dependent upon its mother, due to maternal over-nurturing, is more likely to express its frustration in cannibalism.

Psychological interviews carried out with offenders have supported the theory that aggression towards the mother is one of the factors that induces cannibalism, as in the case of Ed Kemper.

Another case, that of Jeffrey Dahmer, indicates that he resorted to cannibalism as a result of stress. He murdered his first victim directly after the break-up of his family. However, this theory does not explain why Dahmer showed signs of cannibalistic fantasies in his early youth.

Most cannibals that have been studied by a psychiatrist appear to have some form of personality disorder or even schizophrenia, as in the cases of Andrei Chikatilo, Albert Fish, Edward Gein and Issei Sagawa. There were many similarities in their personalities, for example, they suffered from hallucinations, black-outs and some form of disorganized behaviour.

We can always surmise as to the reasons a certain person commits a certain type of crime, but can we ever really be sure, especially in the case of such a disgusting crime as cannibalism.

The Company of Strangers by Robert Wilson
Christmas at Thompson Hall by Anthony Trollope
Heart on a Shoestring by Marilyn Grey
A Dream to be Loved Kandi Jaynes by Kandi Jaynes
Last Light (Novella) by Dean Koontz
Volume 3: Ghost Stories from Texas (Joe Kwon's True Ghost Stories from Around the World) by Unknown
Love the One You're With by Cecily von Ziegesar
CRAVED (By the Alpha Billionaire #1) by St. James, Rossi
Zombies in Love by Fleischer, Nora
The Secret of the Seal by Deborah Davis