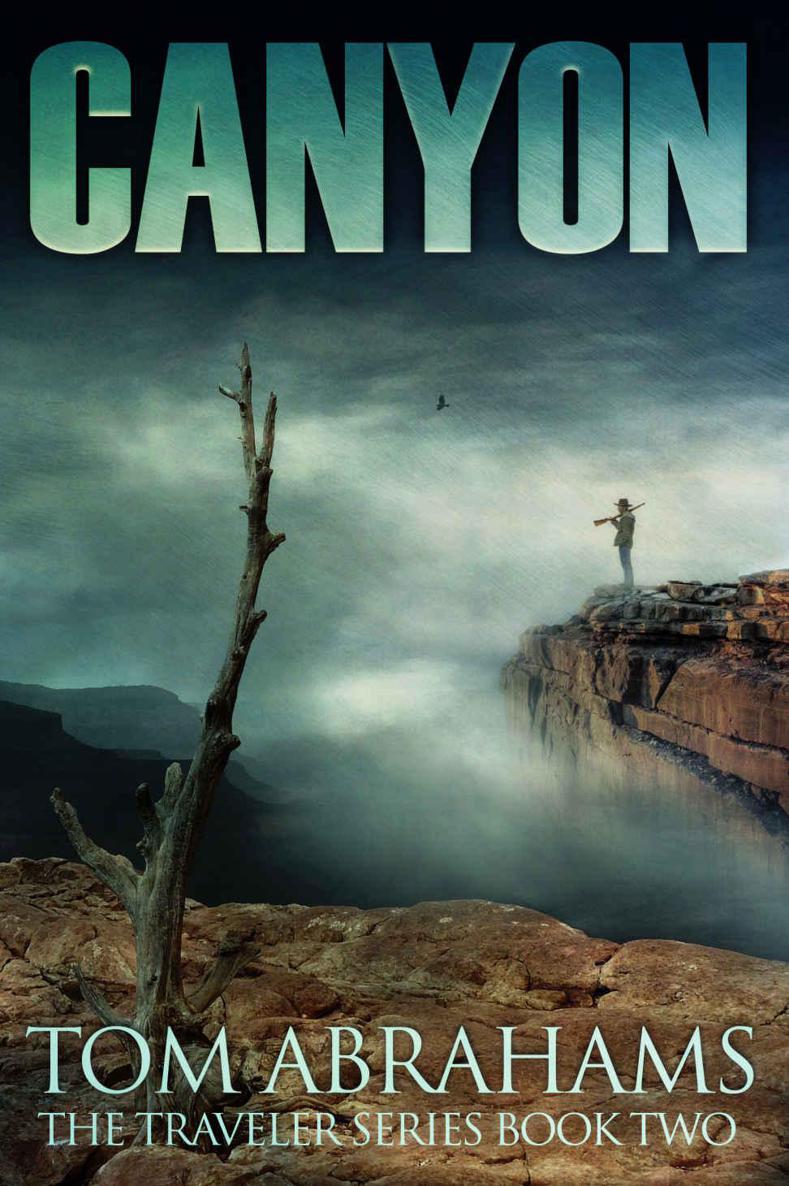 Edited by Felicia A. Sullivan

Formatted by Stef McDaid at WriteIntoPrint.com

This book is a work of fiction. People, places, events, and situations are the product of the author’s imagination. Any resemblance to actual persons, living or dead, or historical events is purely coincidental. No part of this book may be reproduced, stored in a retrieval system, or transmitted by any means without the written permission of the author and publisher.

OTHER WORKS BY TOM ABRAHAMS

EXCERPT FROM WALL: BOOK THREE OF THE TRAVELER SERIES

“Those to whom evil is done do evil in return.”

The IED ruptured without warning, blasting pieces of pipe, shards of glass, ball bearings, red fur, and carpenter screws into three of the six soldiers on patrol near Abdul Wahhab Agha Hospital on the city’s western edge.

The concussion blew Captain Marcus Battle from his feet, slapping the back of his helmet on the cratered pavement of Assultan Suliaman Alqunoony Avenue. He was dazed, a sharp ringing in his ears overpowering his thoughts.

For an instant, as he stared into the cloudless pale blue sky, he thought he was in Killeen, lying in the grass with Sylvia. Almost as quickly as the delusion formed, it evaporated. The muted sounds of shrieks and pained screams accompanied the high-pitched tone of the ringing.

He rolled over onto his side, facing the spot where the tattered Elmo doll had exploded. Two of his comrades were on their feet, tending to what was left of the other three. Then he saw one of them spasm. He shuddered, his head snapped backward, and he went limp in a spray of red.

The second soldier dropped to his chest, quickly engaging his HK416 rifle, thumping random targets as he searched for the source of the gunfire and took two shots in his left leg.

Battle, still dazed, rolled over and found his HK416 on the ground next to him. He dragged it into position, pulled himself to one knee, and started firing.

He couldn’t hear and could barely focus, he didn’t know who was dead or alive, but he stood and started moving toward the gunfire. Bullets whizzed past his head and ricocheted off the ground around him. He took one in the side that slugged his Kevlar. It knocked him back for a second and felt like a thick punch to his gut. Battle kept moving forward, fully exposed, until he emptied the thirty-round magazine and found some protection behind the overturned charred frame of a pickup truck.

“Battle!” the wounded soldier called during a momentary lapse in gunfire. He’d managed to find adequate protection behind a concrete road barrier, having dragged himself there with one good leg. “I’m pinned. The others are gone. Get out of here. Try to find us help.”

Battle couldn’t hear him. The dog whistle piercing his ears hadn’t subsided. At least his vision was clearing. He exchanged magazines and looked through the holes in the truck’s frame. Behind him was a three-story building. Most of the windows were shattered or cracked, but he couldn’t tell from which spot the sniper was taking shots. Battle looked back toward his patrol partner. It was only a matter of minutes and he’d be dead. He couldn’t leave him.

Battle, his back pressed against the underside of the truck frame, said a prayer and spun around free of the truck. He aimed up at the building and pulled the trigger, releasing a quick burst for cover. He dashed across a short field of debris to the building’s entrance and bolted through. He found himself inside a narrow concrete stairwell that stank of urine.

Battle bounced up the first flight of stairs, and feeling the vibration of gunfire against the stair rail, he knew it was coming from a higher floor. He pressed his eyes closed against a searing headache and clenched his jaw as he climbed the second flight of steps. He stood still and felt the vibrations of the gunfire, unable to distinguish from which direction they were coming.

He was about to move to the third floor when, through the ringing, he heard a garbled, guttural-sounding discussion between two men. They were on the second floor. No doubt.

Battle stood to the left of the door, his back against the wall, and with his left hand pulled on the handle to swing the door wide open. He guessed he had maybe twenty-five rounds left in the magazine. He took a deep breath, spun the handle, and moved into the open doorway with his HK416 leveled at whatever waited on the other side.

Nobody was there. It was an empty hallway. It was dark, except at the far left end. From the corner of his eyes, he saw movement in that light. An open door led to the two men unleashing the barrage onto his fellow soldier.

The men were preoccupied with reloading what looked to Battle like a Kalashnikov AK-103-4. One of them was pacing back and forth with a pair of binoculars. He was pointing wildly and yelling at the other man, who was manually loading a new clip. That explained the long pauses between volleys. Behind them was a window devoid of glass and an armoire pressed up against it they were using for cover.

This was his chance.

Battle took another deep breath and took off in a full sprint. As he bounded along the hallway, yelling at the top of his lungs, he tapped the trigger.

The spotter turned to face Battle as the bullets slapped into his chest. He dropped the binoculars and stumbled backward. Battle pressed the trigger again as he reached the open doorway.

The second volley found the man’s neck, throwing him against the corner of the room in a violent heap. Battle burst into the room, shifted his momentum, and slid toward the dead spotter. To his right, the shooter was still on one knee, trying to engage the magazine. He was too late. Battle held down the trigger.

The bullets tore through the shooter, rattling his body as they knocked him onto his back. Battle lowered his weapon, aiming it directly at the shooter’s head, and tapped the trigger for good measure.

Battle checked the rest of the room, which he figured was once a dorm room for the medical school or nearby university. There was a mattress on the floor. A desk was on its side. The bullet-riddled armoire blocked half of the open-air window. On top of it, Battle saw what looked like a crude detonator. He looked to his right. The wall was adorned with Arabic graffiti he couldn’t read and bullet holes he imagined were from return fire.

Battle pinched the bridge of his nose and loosened his helmet’s chin strap. The ringing was subsiding. He could hear yelling from across the street, but he resisted the urge to move to the window. It could subject him to friendly fire.

He fished around the back of his neck for his earpiece and found it, plugging it into his right ear. He pushed the button on his comms. It didn’t work. So he yelled from inside the building, hoping his voice would carry far enough.

“This is Battle! All clear! Threat neutralized!”

Buck. Rufus Buck. That was who survived. The men liked him. He was a natural leader. He was a fellow Texan, though he wasn’t one of Battle’s favorite people. He didn’t always adhere to the rules of engagement, as they were. He liked to bend them in his favor. Still, he was American, he was a soldier, and he needed help.

“On my way.” Battle cleared the room, found his way back down the stairwell, and maneuvered through smoking debris into the street.

He crossed the crumbling asphalt to its opposite side, for the first time seeing the full impact of the IED Elmo. Bile rose in his throat. He couldn’t distinguish arms from legs or one man from another. Only the names on the ragged, bloodied strips of the digital camouflage uniforms told him who was who.

“You’re it?” Battle asked Sergeant First Class Buck. He was an enlisted man, an E-7 NCO who didn’t always play well with the commissioned officers who he considered fast-trackers.

“Roger that.” Buck was still leaning against the concrete barrier. “I don’t know for how much longer, though.”

Battle stepped to the other side of the barrier and saw the extent of the sergeant’s injuries. He had a tourniquet tied above his knee. Below his knee was a bloody mess. His foot was wonky, turned at an unnatural angle.

“I’m gonna need your help.” The sergeant was pale, his eyes sunken. Battle knew he’d lost a lot of blood. “I’ve called for help. Nobody’s coming. Our comms are busted.”

“What do you think?”

“Had to ask.” Battle scanned the debris field. “I’m guessing the medic’s kit is gone.”

Battle put his rifle on the ground and stepped over Buck. “I’m gonna carry you.”

“We’ve got no choice. I’m gonna put you on my back and carry you back to the checkpoint. Then we can get help.”

“That’s gotta be an hour away.”

“You’re not gonna make it. I’m gonna bleed out.”

“Give me a better option.”

“That’ll take too long,” Battle argued. “And clearly, the faction we thought was controlling this part of the city isn’t really in control. You’ll be dead before I get back.”

Buck was pointing behind Battle with a trembling, blood-soaked finger. “What about that?”

The Wells Bequest by Polly Shulman
A Good Indian Wife: A Novel by Cherian, Anne
The Solarian Celebration: Book 3 of the Alliance Conflict by Jeff Sims
15 - The Utopia Affair by David McDaniel
Glass Grapes by Martha Ronk
The Clovel Destroyer by Thorn Bishop Press
That Book Your Mad Ancestor Wrote by Bishop, K.J.
Town Haunts by Cathy Spencer
Sensual Magic by Lauren Dane
Dreamers of a New Day by Sheila Rowbotham