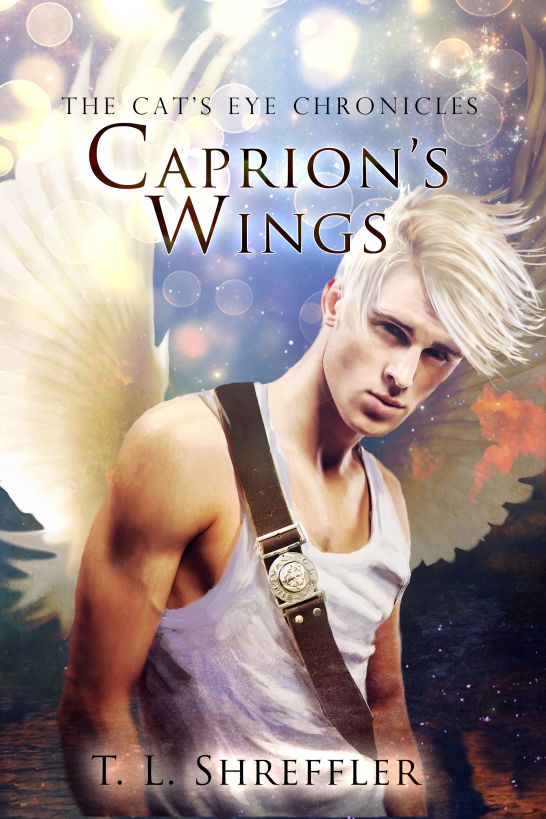 (A Novella of The Cat's Eye Chronicles)

Published by The Runaway Pen.

In the dream, he always stood in the
same place―Fury Rock at the far end of the Isles, gazing into the
darkened sky, counting the brilliant stars. They seemed impossibly
close, bright white orbs as tangible as lanterns, hanging inches
above his head, moments away from his hands. One by one, the stars
detached themselves from that net of sky and danced around him
softly, silently. Then they would slide apart, opening like a great
curtain.

And there―billowing across an ocean of
darkness like white sails―would be his wings.

He would reach for the gentle slope of
white feathers, their great lengths like bars of light. He could
never quite grasp them. They hovered just out of reach, beckoning
him to step from the rock, to take hold of his wings. Yet, he
couldn't. He remained paralyzed, immobile, and wary of the darkness
beneath his feet. Fury Rock stood at the very edge of the Isles;
the top of the cliff dropped hundreds of feet into the ocean. He
couldn't fly yet. How could he leap―how could he claim his wings―if
he couldn't fly?

But on this night the dream unraveled
differently. His wings sailed closer than ever before, pure light
solidified into bone and flesh. He reached for them, hands grasping
a half-inch away.

The ground suddenly rocked beneath
him, pushing him forward. He gasped, wavering, struggling for
balance. But the earth kept quaking, shuddering and lurching, and a
great shadow rose from the ground, seeping through the rock and
gathering at his back. He stumbled, tripping into black space. His
arms swung out for balance, but there was nothing to stop his
fall.

He plummeted off the rock
and into darkness, away from the stars and his wings, icy wind
rushing past him, freezing his skin and gripping his heart. A voice
rose from the abyss: lethal, insidious and oily-slick.
Your people are dying....

Caprion awakened in a cold sweat, his
pale hair damp against his face. He sat up in his cot and turned
his frantic, violet eyes toward the window, taking comfort in the
light of the sun: the One Star that shone upon the world, giving
life to all things. He closed his eyes momentarily, breathing out a
prayer, dispelling the darkness that lingered in his
mind.

For months now he kept
experiencing the same dream, but this time it was different.
Darker. Somehow malevolent.
We do not
dwell on these things,
he heard the
Madrigal's voice say.
We do not
acknowledge them with our thoughts, nor our words.
A Harpy’s voice, after all, was a tool for magic.
It must remain pure. He shook his head, trying to clear
it.

"Caprion!" he heard from the window.
Something struck the wall—a rock, perhaps. "Caprion, wake
up!"

"I'm awake," he muttered, passing a
hand over his face. He felt drained, exhausted despite a full
night's rest.

"You're going to be late! It's past
the greeting hour! They've called your name twice now!"

A jolt of panic shot
through him.
Flight!
He slept late! He leapt to his feet and pulled a white silken
robe around his lean, tall form. It hung a few inches above his
ankles, slightly too short. The novice robes were made of smooth
silk, soft against his skin and weightless. Gold thread embroidered
the neckline and wide cuffs. Caprion slipped on his leather
sandals, fastening the buckles at his ankles, and then he ran
outside.

He lived in the novice district, a
part of the city reserved for young Harpies who had yet to gain
their wings. The buildings were circular and domed, and made of
chalky, white limestone. The surface of the stone was easily
carved. Generations upon generations decorated each of the houses,
etching patterns and symbols or scrawled blessings and poems across
their facades. Some of the dwellings were built before the War of
the Races when the great island of Aerobourne had flown through the
sky, hovering over the mainland—the pinnacle of Harpy
civilization.

Now the great floating island lay in a
series of isles, scattered across the ocean, a cracked shard of its
former self. The city of Asterion, once the capital of Harpy
society, had grown old. Flagstone paths had fallen to disrepair,
cracked and split by weeds, sprawling tree roots and wildflowers.
Untamed foliage crawled down alleyways, up windowsills, and across
the roads.

Caprion followed the main footpath
over a slight hill and through a small patch of forest that
separated the novice district from the main city. A second figure
joined him―Esta, his laughing younger sister. She matched his pace
easily, her feet barely touching the ground. She was only thirteen,
but she gained her wings three months ago in the early Spring. They
gleamed at her back, two small figments of light, each barely three
feet in length and a foot wide. Small wings—those of a seamstress,
horticulturist, or tutor. She currently worked with the younger
Harpies in the academy, teaching them to sing.

"Quiet, little bird," he grumbled
back.

She stuck her tongue out at him, still
laughing. Her long, pale hair shone in the wind like a gleaming
pearl. It almost fell to her waist, decorated with bluebells in
honor of Caprion's Singing; she was the only one who bothered to
attend.

"If I hadn't come to find you, you
would have missed the entire Singing!" she said heartily, as though
this were some big joke.

"I was awake," Caprion said
defensively.

Like their older brother Sumas, Esta
found her star on her first attempt at the Singing―a small, yellow
orb of variable light that flickered and flared in the pre-dawn
sky. The light of its magic had entered her body, manifesting as
wings—pure energy that sprouted from her back. She could now
practice true magic and not just simple singing spells.

His brother Sumas, the pride of their
family, had experienced even more success. At twenty-five, he was
now a celebrated soldier, rising quickly through the army’s ranks.
His wings spanned fifteen feet—a sign of his star’s strength and
magical ability. The girls all gushed over tall, strapping Sumas,
with his deep-set gray eyes and proud, square jaw. They followed
him around and gossiped about his latest escapades. They said he
was the most handsome in the city, the most unattainable, and the
most highly respected.

It grated on Caprion's nerves. His
brother carried himself with a certain vain confidence that begged
to be knocked down. It was the same confidence that Caprion had
once carried before his years of embarrassing failure. Without
wings, he might as well be a cripple. The girls shied away from him
in the streets, averted their eyes, and cut short their
conversations. He tried to ignore the bitter jealousy that arose at
his thoughts.

As a Le’Nasir, his family
held a prestigious reputation. Several Matriarchs had risen from
their bloodline. The entire city expected him to succeed as swiftly
and easily as Sumas. But five years of failure had chipped away his
sense of confidence. He had always expected great things, a unique
destiny, some unnamable purpose. Now, at nineteen—his eleventh
hour—he could feel his future slowly slipping away. He could
already hear the Madrigal's voice:
The
stars are ever moving, fledgling. The sky is more different now
than an hour ago. Your lateness may have cost you
everything.
Depending on a Harpy's hour of
birth, the Madrigal could predict where his star would be, what
time of day he would find it, in what season, and in which
hemisphere of sky. But five times now the Madrigal had predicted
and his star had not shone. This was his last chance to
succeed.

It left a hollow feeling at the base
of his throat. To remain a Harpy without a star, without the
ability to fly, was a mortifying concept. Those without wings were
excluded from many parts of the city, which could only be reached
by flight. The wingless often worked at night when most of the
population slept. They cleaned the streets, mended buildings, or
served the more prominent families. It was a life sentence—shameful
and uncompromising.

And the worst part? He couldn’t find
any reason or logic behind it—no way to fix the situation. Perhaps
his Song was not strong enough and his voice did not carry across
the vast emptiness of the heavens. Or perhaps…perhaps the rumors
around the city were right. Perhaps he did not have a star at
all.

No, he couldn't think such disturbing
thoughts, not before his Singing.

By this point, Caprion had traveled
well into the city. Asterion had once been a grand spectacle of
ornate architecture and it still showed. All of the buildings were
carved of gleaming quartz and white limestone. Towering, domed
structures were connected by bridges and balconies, arches and
entryways, with hardly any doors. The windows were of shining
crystal. Ancient mosaics decorated the walls and archways, symbols
of stars and moons, patterns that mimicked the ocean and wind. The
buildings stretched up and up. Almost half the city was only
accessible to those who could fly.

Despite the beauty of the city, the
wilderness had crept up over the years. Trees sprouted from between
flagstones, small saplings yet to bear fruit. Vines crawled over
balconies, cascading onto the street. Grass and weeds abounded,
conquering flower pots and wide planters, framing tall columns and
porch steps.

A few familiar faces called out to
him. Caprion waved but kept running.

“You’re lucky Sumas is busy this
morning,” Esta sang out, keeping pace nearby. “He’d be furious to
know you slept late.”

“You know,” Esta said, “I forgot how
big the city is on foot. I can reach the Singing Chamber in a few
minutes with my wings!”

“I know,” she smiled cheekily at
him.

Finally, Caprion turned off the main
street onto the Road of Remnants. Statues of ancient warriors and
diplomats lined the thoroughfare, some in fierce armor with swords
in hand, others in great robes carrying stone parchment and books.
He passed the statues quickly, having seen them countless times.
The city fell behind him. The road led him up a great hill to where
the Singing Chamber resided at its peak.

“Do you want me to accompany you?”
Esta asked, falling slightly behind.

Caprion waved a distracted arm. “No,”
he replied, panting. “I’ll meet up with you after. Wish me
luck!”

“Luck, and the One Star’s blessing!”
she called, then fell back, returning to the Road of
Remnants.

Caprion felt relieved. He didn’t want
an audience on this day. No audience meant no one to witness his
final failure.

The Singing Chamber had existed long
before the city of Asterion ever came to be. A great wealth of
sunstone formed a giant bowl carved deep into the center of a hill,
magnifying all sound and light. Once inside the Chamber, a Harpy's
voice could be cast far above the world, through the sky, and into
the realms beyond. In this way, a Harpy could find his
wings.

Panting from exertion, Caprion finally
reached the peak of the hill. The gates of the Chamber stood before
him—tall iron structures twisted into intricate patterns. He slowed
his frantic pace, paused at the gates, and leaned over, trying to
regain his breath.

When he looked back up, the blue robe
of the Madrigal greeted him. Caprion bowed his head again, both to
catch his breath and to show respect. His face flushed. He was
almost two hours late; he wouldn't be surprised if the Madrigal
told him to go home.