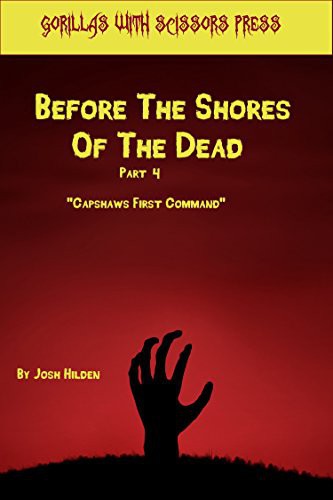 Before The Shores of the Dead

Amazon Author Page (Check out my other work)

The stories in the “Before the Shores of the Dead” series are NOT strictly speaking zombie tales. These of the stories on my main and secondary characters before the events in the series. Or tales which take place during the run of the three books but were never covered in the original work. Sometimes the tales will be linked with events during the published work (either mentioned or implied) but these are character pieces. There are new books coming in the next few years but first I want to tell some small stories to add depth to the people who inhabit my universe.

There will be six of these short stories. When I am finished writing them I will be publishing them in a collection. Following this I will be writing a several novellas or short stories also set in the “Shores of the Dead Universe”. These WILL be zombie tales and will take place solely as straightforward narratives in the time encompassed by the first three books and the anthology of short stories.

I hope you enjoy reading these tales as much a enjoyed writing them.

“Move it people, we have one hour and then either we have the fortifications up or it’s back to the boats!” Major Brian Capshaw called out. He stood on top of the cab of a liberated garbage truck, the Scouts had managed to get up and running before the Guard arrived. His field glasses were pressed to his eyes as he scanned the scene of Guard troops and risen dead.

“Yes sir,” Captain Hacker called from his post on the ground. He had the laminated blueprints in his hands and was giving instructions to the engineers and sections commanders. All around him three and five person squads scurried over the water front area of Duluth while fire teams kept the dead at bay.

The operation was supposed to be a simple raid. Capshaw was to lead the Guard troops into the abandoned lake city behind an advance team of Scouts. When the message from New Harbor arrived all of that was thrown out the window. Now instead of coming in and taking what they needed, they were settling in for a permanent occupation.

“I want those streets barricaded in the next five minutes or there are going to be more dead-heads on us than we can handle,” Capshaw was calm and controlled in his orders. “I do not plan on being here after dark if the fort is not secure. My idea of a good time is
not
a sleepover with Dead Dave and Decaying Dora!” He thought he heard Hacker laugh. The man was entitled to his mirth, they’d been together for a long time now and he was like Capshaw’s good right arm.

The Michigan Guard Troops knew their roles and didn’t need to be told twice. He watched, holding back a smile filled with pride as five person fire teams assembled the pre-made barricades across the streets. Behind them other troops sealed off the buildings and dealt with the dead inside of the mobile fortification. It was called a “Frater Fort” after Katie Frater the engineering student from Findley who’d designed it.

“Major, I have Captain Skeels on the radio,” one of the Guard Communications troops said handing him a compact handset which might have been Desert Storm vintage. Some of the gear stored at the White River facility was far from its prime, but it was still functional so they had no complaints.

Reaching down Brian took the unit with a grin. Like everyone else in the Republic’s defense forces he’d been shocked when the tough Sergeant Major had finally allowed himself to be promoted. “Captain Sleeks this is Capshaw.”

“Major, we’ve reached City Hall,” Riley said. Brian could hear steady and controlled weapon fire in the back ground. “This place looks like it was one of the last places to fall. We’re going to need some of those crackerjack engineers over here to shore it up once we’ve cleared it.”

If Brian hadn’t known better he would have thought Riley was having fun.

“Roger that Riley, we’re going to need another hour to construct the fort and clear the area around it,” Brian responded looking at his watch then glancing up at the midday sun high above his head.

“Copy that Major. We’ll be fine out here until you arrive,” the young battle scarred Captain replied, then he laughed. “It’s not like we’re back on the docks.”

Riley cut communications and Brian was sure the Scouts would have little, if any problem holding the building. The plan was to use the City Hall as the next fort in a plan to leap frog around the core of the city until they were in control of the important areas. Eventually they’d be able to use Duluth as their largest mainland stronghold for reconstruction. The Canadians were doing the same thing from their center in Sudbury and the plan was to link up on the north shore of Lake Superior in the next year.

Or that had been the plan.

Much like the first days of the rising, these plans had gone straight to hell.

Then,
Day One of the Rising, South End of the Mackinac Bridge

“This has got to be a fucking joke,” Corporal Nathan Hacker grunted as he placed another sandbag on the pile. He wasn’t having fun but he was glad he wasn’t one of FNG’s,  fucking new guy, stuck filling the bags from the massive pile of dirt the back hoe was piling up. “Who the fuck down in Lansing thought barricading Big Mac was a good use of our time?”

“I don’t know Hacker,” PFC Tom Linden said tossing another bag on the barricade around their fire pit. The skinny Private was usually quiet and reserved which was why Nathan liked hanging out with him. “Haven’t you heard the reports coming in from the cities?”

“It’s all a bunch of confused bullshit Linden,” Nathan said laughing. “It’s a bunch of damn welfare assholes and fucking thugs rioting because their President isn’t giving them free cell phones and cash for votes.”

He didn’t see Tom Linden shake his head in disgust.

“I knew when we elected one of them as commander in chief it was all going to go down the shitter,” he grunted tossing another sack of dirt. “Anytime you put one of them in charge of something you are pretty much guaranteed it’s going to be a colossal cluster fuck.”

“One of who Corporal?” a calm measured voice asked.

“I am quite interested as to just who one of them is Corporal?” Second Lieutenant Brian Capshaw asked. “Who are the people who turn everything they do into a colossal CF?”

Nathan was frozen, unsure what to say.

“I think Corporal Hacker meant a Democrat sir,” PFC Linden said turning to face the young dark skinned officer. The Second Lieutenant was imposing as hell in his BDU’s. “At least when GW was in charge we had a clear mission sir,” he added glancing at Nathan and giving him a dark look.

“Is that so Corporal?” Capshaw asked.

“Yes sir, you can’t trust the damn Democrats when it comes to defense,” Nathan stammered.

“Well I don’t trust Democrats or Republicans, and I’m not real happy with the current President not keeping his promises,” Capshaw replied setting down his Carbine and taking a shovel from one of the young men filling sand bags. “I admit I bought into the promises of changes but they have been few and far in-between,” he said putting a spade full of dirt in one of the sacks being held by the FNG’s.

“Umm yes sir, absolutely,” Nathan said watching the Lieutenant filling bag after bag without complaint. He was a little too stunned to speak, it wasn’t often you saw one of the officers getting their hands dirty.

“You guys going to stack those or watch us do all of the work?” Capshaw asked. “I mean hell Corporal you don’t want to be out worked by one of them do you?”

PFC Linden laughed at the look on Corporal Hackers face. Then both men began throwing more sacks onto the barrier.

The building was filled with the smell of decay and burnt cordite. The Scouts deserved the reputation they’d developed as some of the best zombie killers in the region, but if the town was still standing when they were finished it was a good operation.

Nathan Hacker followed Brian but didn’t offer Riley his hand. The two young men were friends when not on duty but at the moment Nathan was focused on watching the corners and shadows of the massive building.

Riley took it and a tired but satisfied smile broke his filthy, sweat soaked face. The Scouts had held the Duluth City Hall for more than ten hours. They were tired, they were thirsty, they were low on ammo, and they were victorious. The grounds outside of the massive stone building were piled with thousands of corpses.

“More than five less than seven,” Riley said taking the canteen from his belt and opening it. “We lost two,” he added taking a long measured swallow.

Brian winced. Losing two Scouts for more than five thousand of the dead was acceptable but it still hurt to lose men and women.

“Was it worth it?” Brian asked.

“Follow me Major,” Riley said and Brian was sure he saw a tiny smile on the warriors face. “You too Hacker, you’re going to want to see this.”

Nathan looked to Capshaw who nodded. Slinging his rifle over his shoulder he followed them. It’d been that way since the bridge. Nathan always attempted to remain within a protective distance of Capshaw, the young man was convinced that as long as he was nearby the Major was invincible.

The three men headed toward the ornate staircase. Instead of going up them Riley led them to a door behind the stairs. Several Scouts saluted as they passed and Brian reflexively returned them without thinking. Riley opened the door, Brian noticed the lock had been blown out, and removed his flashlight.

“We have the generators working and the solar mats on the roof are still intact but it’s still pretty damn dark down there,” Riley explained shining his blight LED light down the murky shaft. The smell was repellant even to men who’d been fighting the dead for more than a year. “There were none of the dead down here but there was a body. We have no idea who it was, we think she was the station monitor, but she put a bullet in her brain then proceeded to rot in the closed environment.”