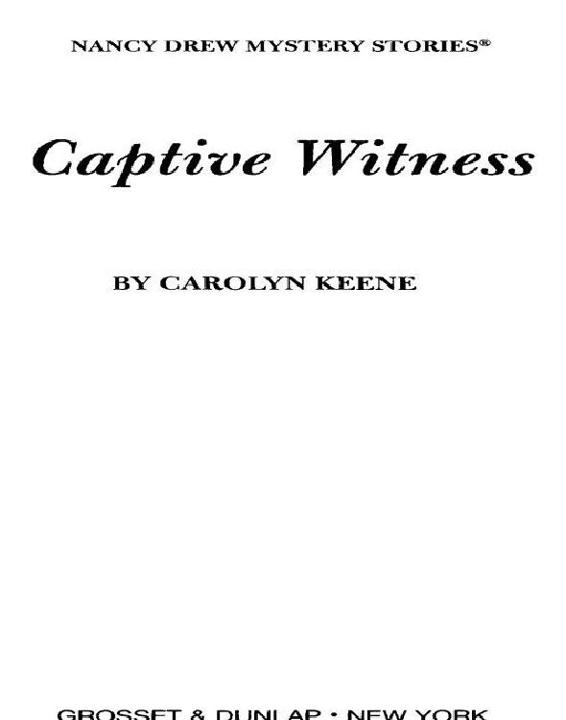 The scanning, uploading, and distribution of this book via the Internet or via any other means without the permission of the publisher is illegal and punishable by law. Please purchase only authorized electronic editions, and do not participate in or encourage electronic piracy of copyrighted materials. Your support of the author’s rights is appreciated.
Copyright © 1981 by Simon & Schuster, Inc. All rights reserved. Published in 2005 by Grosset & Dunlap, a division of Penguin Young Readers Group, 345 Hudson Street, New York, New York 10014. NANCY DREW MYSTERY STORIES® is a registered trademark of Simon & Schuster, Inc. GROSSET & DUNLAP is a trademark of Penguin Group (USA) Inc. S.A.
eISBN : 978-1-101-07765-8

1
Airport Trouble
Nancy Drew brushed a strand of titian hair out of her eyes and patted it back into place as she stood in the Munich, Germany, airline terminal reading a cablegram.
NANCY DREW
C/O EMERSON COLLEGE AUSTRIAN TOUR
PAN AMERICAN AIRWAYS
MUNICH.
DEAR NANCY:
HAVE INTERESTING AND URGENT CASE RE FILM
STOLEN FROM VIENNA FESTIVAL OFFICE. CALL
ME IMMEDIATELY.
LOVE,
DAD
As he had so often, Carson Drew was calling on the detective skills of his eighteen-year-old daughter on behalf of one of his legal clients. This time, by coincidence, the mystery involved the final destination of Nancy’s tour group, the city of Vienna.
The trip was being sponsored by Emerson College which her special friend, Ned Nickerson, attended along with two other freshmen who frequently dated Nancy’s closest companions, Bess Marvin and George Fayne. As soon as the girls heard about the Austrian tour, they arranged to join it.
“I hope you’re holding good news,” Ned said, as he joined Nancy on the edge of a crowd of happy students milling around Professor Raymond Bagley, the college tour leader.
Ned was Nancy’s most ardent admirer and she couldn’t resist teasing in reply. “Well, I don’t know if you’ll think it’s good news or not, but Dad’s just assigned me to another case and I may have to leave the tour for a few days.”
Ned groaned. “Not another mystery?” Then he brightened. “On the other hand, maybe I can go with you on this one?”
Before Nancy could answer, Dr. Bagley’s voice was heard. “All right. Everybody here? Anybody missing, speak up.” The professor with his shock of unruly brown hair and his oversize, brown-rimmed glasses gave the appearance of a happy owl.
He had no trouble seeing everyone in his group since he was almost six feet, six inches tall, though slightly stooped from more than twenty years spent leaning down trying to hear what was going on in his classroom.
Nancy waved to get Professor Bagley’s attention. “Two of them are missing, sir, as usual,” she called, her blue eyes twinkling.
“Oh, no, not again!” moaned her girlfriend, slim, attractive George Fayne. She clutched her short, dark hair in mock despair. “Wait. Don’t tell me,” she said. “Let me guess. I see it all in my crystal ball. There’s this couple. It’s—” She covered her eyes with one hand and waved the fingers of the other hand in pretended excitement. “It’s Bess Marvin! And Dave Evans! They are entering a snack bar. They have disappeared into a snack bar. They won’t come out!”
“Correct.” The girl detective laughed. “Your pretty cousin with the weakness for food, and her constant companion with a weakness for Bess.”
“All right,” called the professor, “let’s all grab our bags and those of our two missing friends and we’ll find the bus. It should be in this area over here.”
But before Dr. Bagley could move, he was confronted by a big, hard-faced man in a porter’s uniform. He bowed, clicked his heels, and picked up the tour leader’s suitcases and his small musette bag which still bore the government initials, very faintly—U. S.
“Permit me, sir,” the porter said with a slight accent. “Permit me, Herr Professor Bagley.”
The professor adjusted his glasses and stared.
Ned Nickerson smiled. “Well, Professor Bagley,” he said, “we all knew you had an outstanding international reputation as an art and music expert but here’s the proof. Everybody knows you.”
But the usually affable teacher didn’t smile. Instead, he took a step toward the porter and extended his long arms. “See here,” he said sharply. “Give me that luggage. I thank you for your courtesy but I’ll carry my own bags, if you don’t mind.”
The porter attempted to smile reassuringly but his hard features couldn’t make the effort. Instead, he took a few steps back, bowed, and clicked his heels again.
“Nein, nein,”
he protested. “I’ll take care of everything.” He walked away very rapidly toward the door leading to the taxis.
“Come back here,” called the professor.
“
Ja
, I will meet you on the other side,” the porter shouted over his shoulder as he threw the bags on a hand truck and began pushing it away at a fast trot.
Professor Bagley waved his arms. “What does he mean, ‘the other side’? The tour bus area is in the
opposite
direction. What is he doing?”
“I think, sir,” said Nancy, moving quickly to Professor Bagley’s side, “that he’s stealing your bags.”
“Oh, no,” Ned declared. “He just
thinks
he’s stealing them. Burt!” He motioned to the short, but powerfully built, Burt Eddleton who was George’s beau. Both boys were on the Emerson College football team and their quick reactions showed why. They zigzagged their way through the crowd, streaking after the rapidly disappearing porter.
Both Nancy and George were close on the boys’ heels—too close for George because as Ned and Burt left the ground and attempted to hurdle a pile of suitcases, they became entangled and went flying over the luggage with George sailing right over the top of them.
Nancy, narrowly averting the pileup, saw the porter dash out the doors toward the lines of taxis, buses, and private cars. As luck would have it, he collided with another hand truck which delayed him long enough for Nancy to veer off and go through a set of doors that brought her out on the sidewalk a hundred feet ahead of him.
As the man ran toward her, pushing the truck, he suddenly looked stunned and angry to find Nancy blocking his path.
“Get out of the way, girl, or I’ll hurt you!” he snarled.
Nancy did not budge, though. “Just drop those suitcases,” she said evenly. “Drop them on the ground and I’ll let you go.”

The man, who was well over six feet tall, heavyset with large, muscular arms, couldn’t believe his ears.
“You?”
he sputtered. “You will let
me
go? You insignificant little creature. You stupid girl. I will crush you like a bug!”
Without further warning, he charged at the girl detective, the angle of his attack leaving her little choice but to outrun him or jump into the speeding traffic.
Instinctively, Nancy made her move. She leaped high, grabbed a projecting pipe, swung her feet up and over the oncoming car and dropped them solidly on the man’s right shoulder.
The impact broke her hold and she was thrown to the ground but managed to scramble quickly to her feet. Her opponent wasn’t as lucky or skilled, much less prepared for an eighteen-year-old girl capable of such acrobatic feats of strength. As a result, when Nancy’s feet hit his shoulder he tripped off balance. The force of the impact spun him around. He lost his hold on the cart and went crashing into the wall.