Captured by the Dark Lord 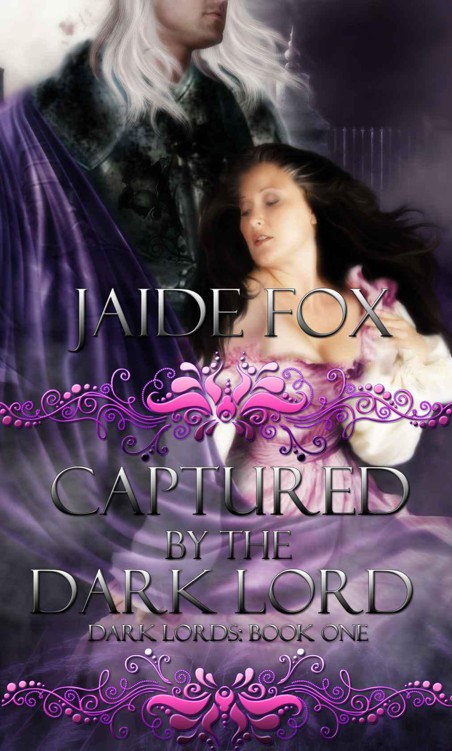 Captured by the Dark Lord

This
is a work of fiction. All characters, events, and places are of the author
’
s imagination and not to be confused with fact. Any
resemblance to living persons or events is merely coincidence.

Other titles by Jaide Fox:

Shadowmere Book One: Marked by the Beast

For untold years you will wait upon death’s door.

From the healer’s hand and love’s demand, you will
live and love no more.

Through the crumbling castle,
the words whispered, hollow as death, black as the night they were--black as
his soul.  Damian Alessandro tightened his mailed fist, his fingers digging
into the scarred wooden arm of his throne.  Cold rage, barely leashed, fueled
his body, clouded his mind.  For centuries the necromancer’s words had taunted
him, an enigma he had yet to solve.  Through the years, he’d given up hope, and
so he remained in Helmskeep, seeking the answer to a riddle ... seeking an end
to the torment of living death.

On a black throne he waited
... waited for an oblivion that would not come ... that would never come.

Outside a storm rose,
shattering the calm of night like crystal thrown upon a stone hearth, mirroring
the ever present turmoil of his mind.  Beyond darkened windows, their panes
broken and leaking in the fury of the storm, lightning flashed like silver in
the clouds, the gods beating their drums in the sky, harkening their ire.  The
air charged with each hush before the thunder, and distant, he heard a sound,
of breath heaved into worn lungs; horses screaming in terror; the snap of a
whip sharp in the air.

He rose, dust sifting from
blackened armor grayed by its obscurity.  Long had it been since he’d left this
throne, this hall.  His movement was fluid, the stiffened joints of his knees
and back instantly mobile the moment he stood.

The wind tore through the
abandoned hall, through the broken panes, whipping once lustrous banners, now
rotting with age.  Silvered threads, tarnished and black with antiquity, shaped
his coat of arms: the spider and the rose ... unraveling as though the wind had
teeth and devoured all.  He raised an arm to block the noise, commanding the
winds rioting through the hall to cease.  A hush descended, and he listened.

Again the noise came to him,
voices so faint, and yet so powerful a draw ...
life
.  The need to touch
a living soul was near unbearable.  An ache of desire descended in his heart
and mind.  Death and blackness had enshrouded him for an eternity.  He had seen
no creature in decades, but the power was unmistakable.  He could practically
taste their life’s essence.

It had been a hundred years
since men had dared walk his halls, a hundred years since his castle had last
been seen by a mortal gaze.  Damian lifted the cloak of darkness shielding
Helmskeep from prying eyes.  He had visitors.  They must be welcomed.

Frigid rain slashed down in
slanted sheets with the stinging fury of a thousand bees, blinding Henry to the
road ahead.  His breath came in hard puffs, the cold air freezing his face and
lungs.  He shielded his head with one arm as the coach slowed to a halt before
blackened gates that seemed to appear from the gloom almost before his very
eyes.  There could be no other chance for shelter if they were to seek it, not
along this route, for he’d seen no sign of civilization since their attack.  He
turned in his raised seat and slid back the small door to speak to his master.
“My lord,” Henry shouted above the din, “We cannot go on in this storm.  The
horses are nigh mad with fright.  There are gates ahead.  Should we stop until
this storm abates?”

Lord John Bordeaux leaned
close to the window, squinting weathered eyes against the rain spattering
inside the lattice work.  “Do Henry.  Surely they’ll not turn a gentleman
away.”

Henry nodded, slid the door
closed, and dropped down to the ground.  Thick mud sloshed over his boots as he
landed, smacking his heels with each step, sucking at his boots as if to drag
him down into its belly, as if the earth itself hungered for the sustenance of
human flesh.  Nearing the entrance, he could see the iron gates were wicked in
the flashing light, barbed on the ends and looking more akin to some spider’s
web than any creation of man.  Peering through them left then right, he spotted
an overturned stool and more distant, a squat house, but could not see if the
gatekeeper’s house was manned or not.

He cupped his hands around
his mouth and called, “Hello?”  He stopped and craned his head, listening for but
hearing no response.  “Is there any man about?  My master begs shelter.
Hello?”  His voice cracked with the shouting, but he received no answer save
the roar of thunder overhead.  Likely a gent fallen on hard times who couldn’t
afford extra staff, he thought, or else they’d taken shelter in the main
house--from what he could see, the small building was shabby indeed.

Henry pulled his coat higher
on his neck, shivering, and tried the gate’s lock.  The lever moved easily, and
the gates pushed open, their creaking progress barely audible above the
pounding thunder.  His skin crawled.  He stood unmoving, watching as the gates
swung wide, looking for some sign of trickery, of life at all, something to
ease the sense that evil dwelt here.

“Henry?”  Lord Bordeaux
called from the carriage.  “Is anything the matter?”

Henry turned slightly and
shouted over his shoulder, “No, my lord.”

His imaginings were running
away with him.  Even if this land was abandoned, it was strange to leave the
gates unlocked in this area--a border to Hellsing--den of any number of
hellspawn.  They themselves had been separated from heavy guard in a melee,
which was why they were on this freakish pass--more’s the pity.

The horse team stamped and
whinnied in fright, acting as nervous as he felt.

Ignoring the warning in his
mind, he went back to the coach and guided the horses through the gates, then
shut them once they’d passed through.

He climbed back atop the
driver’s seat and cracked the reins.  The horses shied, but he kept them under
firm control despite their terror, moving ever forward.

The drive they traveled was
overgrown with weeds near high as the wheels of the coach, hampering their
speed, and large holes dotted the packed drive, chunks torn from the earth by
heavy rains and roots.  The pervasive feeling something was not quite as it
should be persisted as they traveled down the drive, and an enormous dark shape
loomed ever closer.  Through the rain, he spied the great manor, its details
clearer with their progress.  More castle than anything else, its size was
monstrous and imposing, making him wonder how such a giant of architecture
could be missed in the countryside.  He’d never seen the like before.

This land was darker than their
own and likely caused it to be overlooked.  It could not be too distant from
that place he called home, yet the atmosphere felt as alien and thick to him as
he would feel trapped in the depths of a black mire.  A pall hung about the
land, perpetually ravaged by storm in his limited experience, and fog shrouded
the castle’s heights like cobwebs.  Turrets ravaged by time clung high to the
castle’s walls like a cancer, making the dwelling appear to defy gravity.  The
darkness before them was unbroken by the shine of life giving flame.  No lights
glowed from the broken windows, no man came to greet them as they pulled along
the circular drive.  Not that he’d expected it.

It looked like no living
creature called this place home, or had in many years.

“Whoa,” Henry said, easing
back on the reins as the team slogged to a halt at the manor’s entrance.  He
looped the reins on the break handle and dropped to the ground to assist Lord
Bordeaux, eyeing the dark exterior with increasing foreboding.

“It appears the place is
abandoned, my lord,” Henry said as he opened the door and shielded Lord
Bordeaux with his coat until they neared the overhang that formed a dark cave
of an entrance.

“Yes, it does.”  Lord
Bordeaux shook the rain from himself, looking up imposing doors that stood as
tall as two men end to end.  Henry knocked sharply on the door, but after
several minutes, it appeared there would be no answer.  Wondering if it was as
secure as the gate had been, Henry pushed the rusted lever.  As before with the
front gate, he found the door unlocked, unprotected, almost as if it had been
left so in invitation.  Thoughts like that were foolish and often misguided.
He’d been made a fool of many times for his superstitions, and he’d learned to
quell imbecile thoughts, at least aloud, long ago.

They peered cautiously
inside, seeing naught but utter blackness and the slight shine of lightning
reflecting off of water that had puddled on the floor.

“I think you may be right,
Henry.  This land must border my own, yet to say truth, I’ve never heard of
this place before, nor know to whom it belongs or who once owned it.  Tend to
the horses.  I’ll go inside and see if I can find kindling for a fire.”

Henry took one last look at
the blackness and shivered.  “I fear this land is accursed.  There is a taint
to the air that chills my bones.”

“‘Tis naught but the cold and
wet, Henry.  I feel it too.  We’ll soon have a fire to warm these old bones of
ours.  Go now, before the horses sicken.”