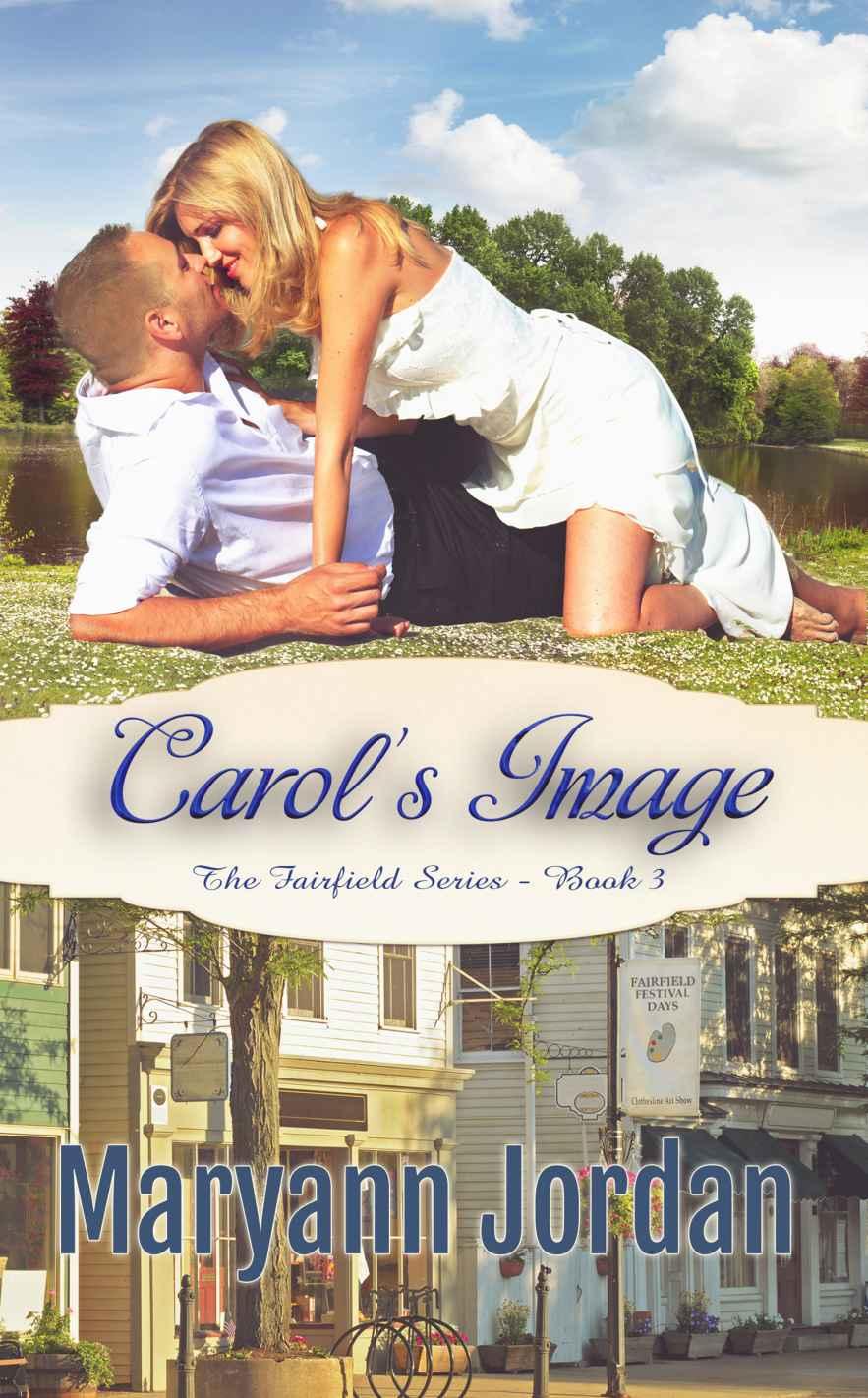 Book Three
of the Fairfield Series

I dedicate this book to the legions of teenagers who have sat across from me as I have counseled them over the past 20 years. To the ones that trusted me enough to tell me about their families, their fears, their hopes, their dreams. To the ones that discussed their depression, their anxieties, their disorders. To the ones I have held while they cried in grief. To the ones who hugged me for something as simple as listening to them. To those whose smiles have lit up my office and whose tears I will carry with me always. They have touched my life and I hope I have in some way touched theirs. Many of my students have long gone on to have families of their own. Some of my students have passed away. But always they are in my heart.

“C
arol, how many times do I have to tell you to sit up straight? Your father will be here in a few minutes with his dinner guests, and I do not want to see your dress wrinkled. Do you hear me, young lady? Do not do anything to upset your father.”

Carol, sitting as still as she could on the hard chair, tried not to wiggle. Her yellow blonde hair, curled tightly, hung in ringlets down her back. Her white, frilly dress felt itchy, but she knew not to complain.

“I’ll be good, mama,” she promised. Hoping against hope that her parents would notice how nice she looked, she sat as still as possible.

Hearing the front door open, she looked up expectantly as her father and his business associates came through the foyer. Sitting up as pretty as possible, she smiled as they walked in front of her on their way to the dining room. Her father, leading the small group, walked by, ignoring his daughter completely. The smile leaving her face, Carol sat in the chair, not knowing if she could get down.

“Carol, come in here quickly,” her mother admonished. Leading her into the dining room, she pointed to the corner chair that Carol was to occupy. Her mother leaned down, as though to kiss her daughter’s cheek, but whispered instead. “Now eat carefully and don’t spill a drop.”

Carol, bored with the adult conversation, knew she needed to be quiet and not draw attention to herself. With nothing else to do, she concentrated on eating everything on her plate. Surely, that would make her parents happy.

After dinner, when Carol was up in her room, her nanny helped her out of her frilly, itchy dress.

“Were you a good girl at dinner, sweetums? Did you make your momma and daddy proud?” she asked, tickling Carol.

“I don’t think they even noticed me,” Carol admitted. “But I had chocolate cake for dessert,” she continued with excitement.

Her nanny, clucking with frustration, helped Carol get into her pajamas and tucked her into bed. Carol was too young to understand, but her nanny knew that little Carol spent a lot of time trying to stay out of the line of fire with her parents. Mealtimes became a time for just eating as much as she could to stay out of the conversation. Looking down at Carol’s sleeping, chubby little body, she said a prayer.
Lord, look out for this angel. She needs your love. She needs to feel love. She needs to find her own way and not just the image her parents have.

Running along the track at her high school, Carol continued long after the track practice had ended.
Just one more lap
she chanted to herself, mentally calculating the number of calories each lap would burn off.

Her body lean and toned, she forced her quivering legs to speed up around the last turn. Finishing the last lap, she slowed down, jogging around one more time as she slowly stretched her muscles.

“Hey Carol,” came a shout from over by the field house.

Turning toward them, her long yellow pony tail swinging behind her, she lifted her hand to shield her eyes from the sun. Several girls were standing next to the locker rooms, with a group of guys. One of the boys, the cutest of them all, was smiling at her, waving her over.
He is so cute. But his father owns the hardware store. Daddy would never approve.
Sighing, Carol walked over to her friends.

“We’re heading out to go grab some food at the Hang Out. Wanna come?”

Carol carefully considered her answer. She loved the food at The Hang Out, but knew the exact calorie count of every item on the menu. Weighing the pros and cons, she looked into the eyes of the cutest boy, staring back at her. Her parents would never miss her since they would be having one of their many dinner parties tonight. Breathing deeply, she knew she could be in control of the situation and have some fun.

“Sure, just let me change first,” she replied.

Spending the next couple of hours at The Hang Out, Carol enjoyed herself more than she had in a long time. The group shared the pizzas, cheesy fries, milkshakes, and the cute boy even shared a hot fudge sundae with just her.

“Why haven’t you hung out with us before?” he asked, smiling over at her. “You’re the prettiest girl in school and yet we almost never see you.”

She looked down and mumbled, “Oh, my parents don’t want me to go out much.”

One of the girls in their group, hearing her comment, immediately began to prattle on about her parents never letting her do anything. Much to Carol’s relief, the conversation quickly became a debate of whose parents were the worst.

As the group broke up and headed out to their cars, the cute boy asked, “So can I drive you home?”

“No thank you,” she replied. “I’ve got my car here and have a few errands to run first.”

They all said goodbye and Carol watched them as they drove away. Sliding back out of her car after the last of her friends left the parking lot, she quickly walked around to the back of the building. Glancing around carefully to make sure no one was around, she knelt in the grassy area and began to push her finger down into her mouth.

Forcefully gagging herself over and over, she began to feel the familiar feeling of her stomach churning. It did not take long for the vomiting to begin. Leaning over, she expelled everything she had eaten in the restaurant. She wiped her mouth with a practiced hand, standing in the process. Taking a shaky breath, she walked back to her car, smiling.
All those calories…gone.

Driving home, she arrived while the dinner party was still in progress. Slipping through the back door, she headed up to her room, bypassing her parents.
It doesn’t matter; they’re just in there planning my future anyway.
Quietly making her way up the stairs, she walked through her bedroom and into her bathroom. Stripping to take a shower, she turned and viewed her reflection in the mirror. Blue eyes moving head to toe, she scanned her image.
What do I see? A bother. A disappointment. Not the son they wanted.
Perusing her figure, she continued to stare into the mirror, her image staring back.
A little roundness at her stomach. Thighs a little heavy.
Shaking her head, trying to get the images out of her mind, she turned to the shower.
What else is new?

“H
i, Tommy,” came the giggling voice from the parking lot.

God, I hate being called Tommy. Especially by someone who giggles.
Tom Rivers looked over at the woman standing next to her car, recognizing her as one of his past fuck-buddies. Bleach blonde with black roots. Tight dress. Lots of makeup. She had that look…the ‘please won’t you come over here so we can start something up again’ look.
Not happening.
Tom threw up his hand in a half-hearted wave, and kept walking, not breathing easy until he saw her drive off.

Shaking his head, he wondered how old a man needed to be to learn that some decisions were just plain dumb. And hooking up in his hometown when he was a detective was dumb. Tom had now taken a page from his police partner Jake’s playbook – no hometown hookups or fuck-buddies – too risky when investigating crimes in the area.
And there are plenty of women in the next town over,
he thought while remembering last weekend’s fun.
What was her name? Oh hell, it doesn’t matter. It was great for one night.

“Look out!” he heard someone scream, as the squeal of tires ended with a flash of pain and then blackness.