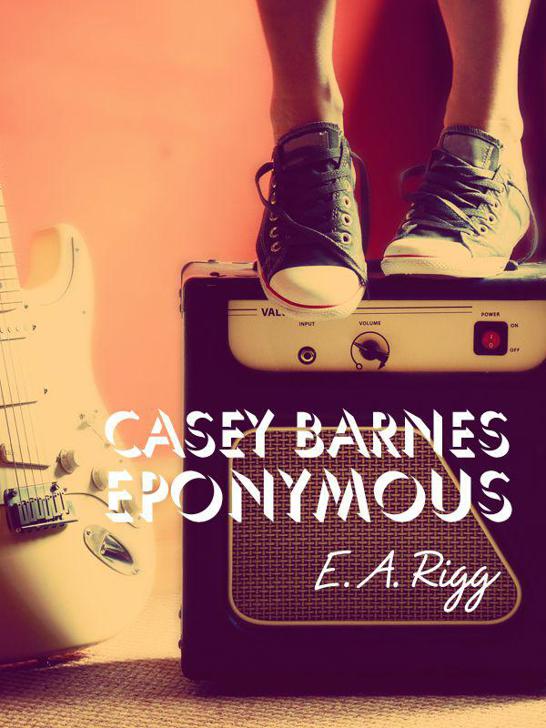 Ten minutes before he came in and everything started again,
Casey was not, for the first time in weeks, thinking about him.

She was focusing on that day’s target.

The target was a girl, a fellow sophomore, on the other side of
the library.

She was skinny, blonde,
and in a sweater from a mall store.

At first the girl ignored what Casey slipped her.

A piece of paper in a library book was generally
assumed to be a leftover from a prior reader.

Some kids shoved it back in the book
without looking.

Others crumpled
and aimed it at the nearest trashcan.

In those moments she dashed over and announced they were
supposed to read the information on that paper.

After her proclamation, there was a look
with a string of questions behind it.

And who are you?

At that point in high school Casey was known to her friend
Leigh, teachers from freshman year who could not forget her choice comebacks,
and kids from those classes who remembered her for the same reason.

But sophomore year had only been going
on for a few weeks.

She had yet to
lay down real tire marks.

Except
for Leigh, those teachers, kids, and him, most people did not know who she was.

“Just read it,” she would respond.

The
skinny blonde glanced at the paper.

The title caught her eyes.

It
was that day’s date. The girl looked more closely.

1. A pop song…
For when the blonde
girl accessorized other sweaters from that dumb store.

For the morning, when mom was making
toast and the promise of a new day was as fresh as the coffee percolating
beside it.

Like marshmallow fluff,
a pop song would smooth over negative residue from the day before.

Party invites not issued, looks not
returned from boys.

The sweater
said a lot.

A pop song would make her
think that day would be different.

Because that was what pop songs did: stuck you in a daydream and kept
the cotton candy stick swirling until it yielded a mass of sticky sugar.

Until it felt like even your toes had sugar
between them and the high was so great there was no way your day would not be better
than the one before.

Sometimes, that was all it took.

It would have to be an interesting pop song though.

A subtle push in the direction of hip.

Give a girl a fish and you feed her for
a day.

Teach a girl to fish and you
feed her for a lifetime.

This was, after all, why Casey made the lists.

The path to more free candy, happiness,
and overall cool for the participants in the current and outstanding hell that
was high school would not be created by popular kids.

No, that road would be plowed by
music.

And not the crapola on pop
radio in between commercials for tanning salons either.

Rather, the kind of music you had to be
in the know to know about.

She flunked
the test on the American Revolution and cheated on the one about the
French.

But on revolution through
music she would get an A.

California
retro-hip with a hint of irony.

Just what the doctor ordered.

The target looked around the library.

Casey would bet a vinyl copy of
Sgt Pepper’s
that the target had never heard of Edward
Sharpe & The Magnetic Zeros.

As
the girl’s eyes reached her, she grabbed the book she was supposed to be
scanning and opened it.

From his perch a few feet away the librarian
Mr. Cole glared at her.

Mr.
Cole’s glares and Casey’s hang ten signs constituted over half of their
communication.

They had since the
fifth day of school.

That was when
Mr. Cole, a Libertarian with a short fuse that caused his facial veins to turn
purple when kids in the library spoke too loudly, asked her to remove the
N.W.A. sticker from her notebook.

“But Mr. Cole they weren’t sending bad guys to
Guantanamo when that song came out.”

Mr. Cole looked from the sticker to a pair of
scissors lying a few inches away.

If the conversation went the wrong way the scissors would make waste of
that sticker in seconds.

“Anyway,” she forged on, “I assume that as a
patriot you support an artist’s right to exercise his or her first amendment
rights.”

He looked from the scissors to Casey.

She did not feel unafraid.

She really was impressed.

But the compliment did not accomplish
its intended task.

Mr. Cole got
steamed all over again.

She cocked her head to one side.

Of course she had work to do.

That was the whole reason she was in the
library in the first place.

Students at her school had to do a semester’s worth of volunteer credit
at one point in their four-year career.

Most got it out of the way by helping with school plays or setting up
for sports games.

But not Casey,
whose mother Tricia was an attorney from whom high marks in school had flown
like water from a tap.

Tricia could
not fathom why Casey’s report cards contained numbers beginning with 6 and 7,
occasionally 8, and never 9.

She insisted
that Casey get her credit by being library assistant, an über-geek volunteer
gig if ever there was one.

Old Lady
Barnes’ theory was that it would provide her with enforced studying time.

Did Casey have work to do?

She had a quiz in biology the following
day and a history paper due in two.

She looked at Mr. Cole.

And I’m guessing I’m not gonna get a straight answer from you about how
it was you knew N.W.A. wrote ‘Fuck Tha’ Police’?”

At any rate it was at that moment, on the fifth day of school,
that communication between Casey and Mr. Cole broke down.

After she shot him the hang ten sign she
looked back to the blonde.

Something edgy for
lunchtime.

For when the promise of
the a.m. sugar high did not quite pan out.

Something to say okay maybe you’re not going to become a queen bee today
but disappointment does not have to be as bad as it seems.

It can even make you edgy.

The skinny blonde did not have anything by TV On the Radio
either.

But maybe, not right away, but in a few
hours, a few days perhaps, that song would make the girl realize that some
sweaters are best donated to the Salvation Army sooner rather than later.

Leigh walked through the door.

Leigh and Casey were best friends, even
if neither was the kind of girl inclined to label each other as such.

They had been since the beginning of
junior high, when they bonded in English class over their shared observation
that girls in the popular clique dressed alike.

They did too, even if it was in the way
they did not dress.

Leigh wore baggy jeans and shirts with paint stains from her
art classes.

On her
favorite T, Sid Vicious’ right middle finger was in the air and his left hand
held a bottle of whiskey.

Most kids
at her school in Bethesda, Maryland, a suburb of Washington D.C., did not know
who Sid Vicious was.

The shirt got her sent home
when she forgot to wear a sweater over it in front of the principal.

She liked that even more.

Casey had long dark hair that, more often than not, needed a
shampoo and good combing.

Kids sometimes
asked her if she was growing dreads.

She had big dark eyes and was not unattractive.

In a scruffy,
girl-skate-rat-who-doesn’t-actually-skate kind of way.

Except for when she was in art class, Leigh was shy.

In art class, however, where she created
vibrant paintings that quickly won admiration, she was confident.

As opposed to Casey, who pissed off teachers and got into
trouble an average of four days a week, Leigh did not tend to break rules or
speak back to authority figures.

But every once in a while she rebelled, and rebelled hard.

During the last week of junior high she
broke into the school’s public address system and announced that Shakira was in
the library and would be signing autographs after school.

She got grounded for a month, during
which time she did what she always did in the aftermath of a bad girl incident,
i.e. bottle it all up and act perfect.

The summer prior to sophomore year, something had happened
again.

She visited once a week.

They told Mr. Cole it was because
Leigh’s teacher sent her.

Casey
slid a paperback biography of Janis Joplin over to her.

Mr. Cole folded his arms over his
chest.

“I find it suspicious that
your teacher sends you here every week.”

Casey did too, but she did not let it break her stride.