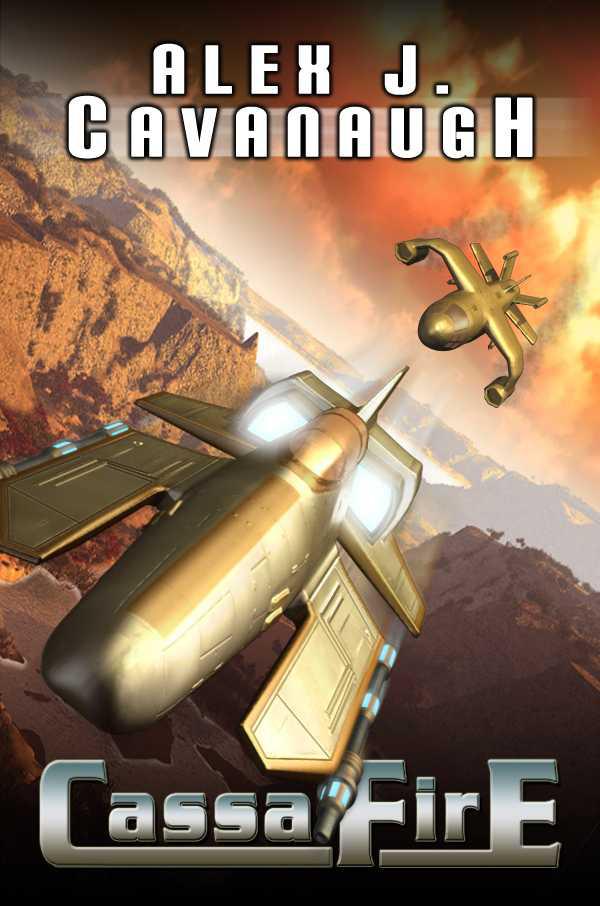 From the author of the Amazon Best Seller, CassaStar

“
A fun filled space opera of romance and adventure, CassaFire harkens back to its 80s influences like Battlestar Galactica, Buck Rogers in the 20
th
Century, and Star Wars. Family friendly and sure to please fans of classic space opera in the Golden Age Style.”- Bryan Thomas Schmidt, author “The Worker Prince”

“…
hearkens back to Robert A. Heinlein’s early books in its appeal to a younger adult audience as well as military sf fans.”

“
This is the ideal novel for anyone wanting to dip their toes into Sci-Fi. I can’t recommend this one highly enough.” - Fantasy Nibbles

“…
perfect for someone looking for a light space adventure with… great characters and story. Highly Recommended.”

“
Those looking for an unchallenging throwback will enjoy Byron’s adventure…”

- Randy Johnson Not The Baseball Pitcher

All rights reserved. No part of this publication may be reproduced, transmitted, or stored in a retrieval system in any form – either mechanically, electronically, photocopy, recording, or other – except for short quotations in printed reviews, without the permission of the publisher.

This book is a work of fiction. Any resemblance to actual events or persons, living or dead, is coincidental.

“…
calls to mind the youthful focus of Robert Heinlein’s early military sf, as well as the excitement of space opera epitomized by the many Star Wars novels. Fast-paced military action and a youthful protagonist make this a good choice for both young adult and adult fans of space wars.”

For my three awesome friends

who guided me on this journey -

I couldn’t have done it without you!

Byron scowled at the cargo. Twenty years ago, I helped end the Vindicarn War, received the fleet’s highest honors, and was given the freedom to pursue any position worthy of a pilot of my caliber, he thought, grinding his teeth. Today, I’m supervising the loading of luggage. Damn, this is wrong!

Pulling on the straps, Byron tightened the latch one more time. The men who’d loaded his shuttle knew nothing about proper cargo storage. They had not even checked the restraints. It wouldn’t do to have the bins break free during flight. He was responsible for the cargo’s safe arrival on board the Rennather.

Satisfied the crates were secure, he returned to the shuttle’s central compartment. His boots echoed off the metal floor. One section squeaked in protest, but it was a comforting sound to Byron’s ears. He’d piloted this particular shuttle for over twelve years and knew every rattle and groan. Only his knowledge of the Darten rivaled that intimacy, as twenty years in service together had bred a certain amount of familiarity with the tiny fighter.

Pausing at the open hatch, Byron scanned the encampment. The temporary structures, awash in pale blues, stood out against the green of the forest. With the cargo in place, all he lacked were three passengers. Last time Byron had seen the men, they were gathering personal equipment. Considering the urgency of their orders, he wished they’d speed up the process. Commander Korden wanted to reach their next destination in two days.

Noting three men ambling toward the shuttle, he continued forward and entered the cockpit. Judging from their pace, he had time to perform a systems check.

His fingers raced across the control panel, their movement automatic. Byron possessed more than enough experience and skill to fly an exploration shuttle. For twelve years now, the Rennather’s commander had reminded Byron of his qualifications and eligibility to transfer to any ship he cared to pilot. Claiming contentment with his current assignment, Byron saw no need to seek other opportunities. Byron’s outstanding skills were a luxury in his position. Despite moments of monotony, he found ways to challenge himself and avoid complacency in his position. Besides, he’d made a promise to a friend many years ago. Byron could not justify breaking that pact just because he was bored. Besides, Cassans lived long lives. He still had time for another career change and was in no hurry.

There were moments of excitement on the Rennather, though. Byron had seen more regions of space than even piloting a Cosbolt fighter would’ve provided. Exploration ships traveled beyond the allegiance borders, meeting new races and strengthening relationships with potential allies. Politics didn’t interest Byron but flying on the edge of known space held a certain mystique.

A door sensor alerted him that his passengers were boarding. Pressing one final button, he turned from the controls. Byron stood and placed himself between the cockpit and main cabin. Crossing his arms, he leaned against the wall and focused on the three scientists strolling up the ramp. The third man crowded the first two, pushing them forward.

At least someone understands the importance of our next mission, Byron thought.

“
Officer Byron,” the first man stated, pausing to stand at attention. His voice was as thick as his midsection.

Byron nodded an acknowledgement, fighting to conceal the smirk that tugged at his lips. He recalled Vorsan’s presence on previous flights. The science officer didn’t handle space flight well.

“
I hope your meal was light,” said Byron.

Vorsan’s eyes narrowed, but he offered no answer. Byron wondered if he dared taunt the man today with a demonstration of his flying ability. The science officer was a dour sort. Byron might as well have some fun.

The second man hailed a greeting. His shrill voice matched his tall, lanky frame. He joined the first, stowing his gear in the empty compartment. Byron followed their every movement. Although science officers were precise by nature, they tended to forget those habits when traveling. More often than not, stowed gear required adjustments.

Aware that the third man had paused, Byron’s attention shifted to his final passenger. Wide eyes greeted the pilot, and the dark orbs appeared ready to pop out of their sockets. The lad’s expression mirrored the stunned recognition that arose in his thoughts. Byron frowned. Remote exploration assignments were assigned to those with experience. This boy was far too young.

As if sensing disapproval, the young man altered his expression and straightened his shoulders. “Officer Byron?” he gasped. The pitch of his voice confirmed his youth. The boy’s thoughts continued to project amazement and were filled with adoration.

While telepathic courtesies might be beyond the lad, Byron did not want his own mind exposed. Locking his mental shields into place, he nodded and gestured for the young man to join the others. He’d long grown weary of the recognition. The Vindicarn War was many years past now, and Byron wanted to curtail any further comments regarding his war hero status. He’d lost his closest friend during one of those battles. He didn’t want, or need, to be reminded of the tragedy that had changed the course of his life and career.

Byron sealed the hatch and returned to the controls. Engaging the engines, he listened with pleasure to the deep resonating roar. Connecting to the ship’s teleportation device with his mind, he confirmed the unit’s full strength. The teleporter’s force echoed in his chest and he smiled. Even if the device’s power were to fail, he could still jump the ship. Very few Cassans possessed that ability.

“
A smooth flight this time, Officer Byron,” Vorsan called from the main compartment.

“
Last one a bit bumpy for you?” Byron asked, lifting the ship from the ground.

Guiding the shuttle over the encampment, a sense of mischief crept over Byron. Yanking hard on the throttle, he pushed the engines to full capacity. Within seconds, the shuttle’s position changed from horizontal to vertical. It ascended skyward at a rapid pace. The engines screamed as they fought the planet’s gravitation. The sudden acceleration pressed Byron into his seat. He delighted in the sensation, despite the cries of dismay radiating from the main cabin and echoing through his mind.

Ignoring the protests, he continued their steep climb. The ship shuddered in protest of such rough treatment, further rattling its contents. The thundering noise, coupled with the engine’s roar, drowned out all other sounds. Eyes focused skyward, Byron’s heart beat with exhilaration. He felt as one with the ship.

Sensing his passengers’ discomfort, he leveled the craft. Relieved moans resonated from the main compartment. Before any of the men could chastise such rough treatment, Byron selected a location within proximity of the Rennather and teleported the shuttle.

For a split second, a silent darkness enveloped the ship. As the shuttle reentered space, the sight of the exploration vessel filled the view outside the cockpit. Without slowing his pace, Byron communicated his intentions to land and steered the ship toward the open bay. The landing bay loomed closer, threatening to engulf the shuttle. Slowing his speed at last, he glided into the opening and brought the runners down without so much as a single jolt. Byron eased the ship into position with a steady hand. He then powered down the vessel as it was towed into the central hanger.

When the shuttle ceased its movements, Byron turned off the remaining systems and arose to open the hatch. His passengers were fumbling with their harnesses. He sensed a great haste to exit his ship. Byron grinned at the ashen complexions, noting drool on Vorsan’s chin.

“
I hope you enjoyed your flight,” Byron said, releasing the hatch.

“
Damn it, Byron,” the man exclaimed, wiping his face. “The ship’s commander will hear about this.”

Byron straightened his back and met the man’s gaze. “I’m sure he will,” he offered, “and that’s Senior Officer Byron to you, Officer Vorsan.”

The man hesitated as he reached for his pack. Pressing his lips together in resignation, Vorsan nodded. Yanking his bag free, he stormed out of the craft. The other two men gathered their items and followed at a slower pace. However, the youngest man paused before disembarking.

Super Born: Seduction of Being by kkornell
Death in the Middle Watch by Bruce, Leo
Unknown by Jane
Fun With Rick and Jade by Scott, Kelli
The Decline and Fall of the Ottoman Empire by Alan Palmer
Wings of Steele - Destination Unknown (Book 1) by Burger, Jeffrey
The F#ck It List: The Complete Story by Rae Lynn Blaise
Time's Daughter by Anya Breton
Chapman's Odyssey by Paul Bailey
We Are Called to Rise by Laura McBride