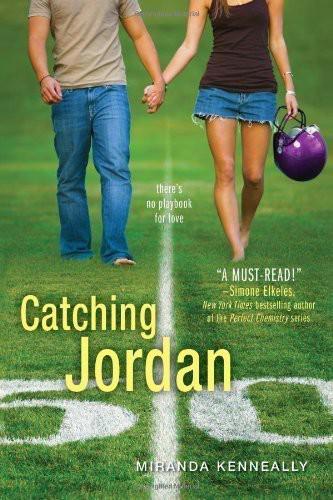 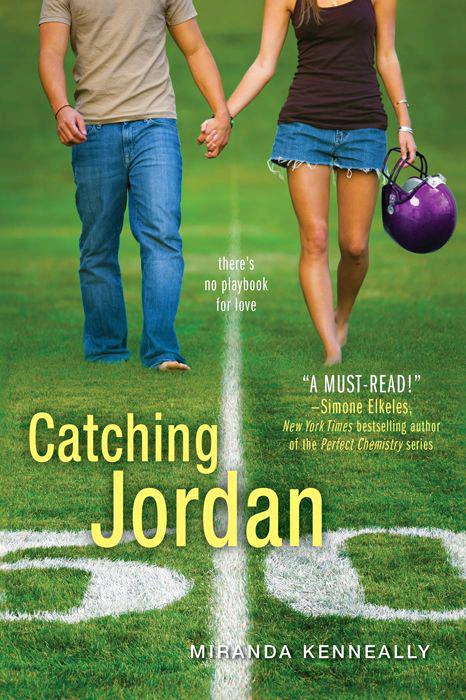 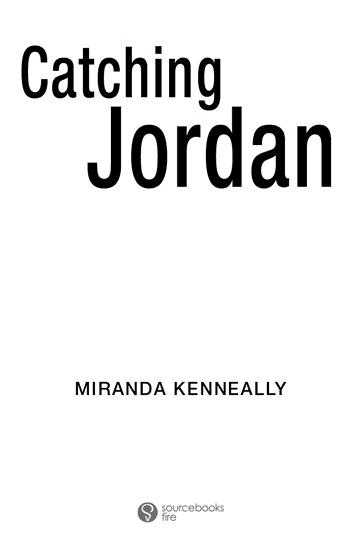 Chapter 1. A Hail Mary and a Harem Chapter 2. Knee Problems

Stil in the Truck

Chapter 23. Who the Hel was in Charge of Homecoming?

Chapter 26. Prepping for the State Championship Only Father, Redux

Chapter 27. The State Championship Chapter 28. He Stopped to get Flowers?

Chapter 29. One Week Since

Chapter 31. A Lifetime Supply of Cookies and Lemonade Acknowledgments

and al the other badass chicks out there
Who ever knew throwing a perfect spiral would be simple compared to dealing with guys?

a hail mary and a harem

the count? 21 days until my trip to alabama
I once read that footbal was invented so people wouldn’t notice summer ending. But I couldn’t wait for summer vacation to end. I couldn’t wait for footbal . Footbal , dominator of fal —footbal , love of my life.

The cue is red seventeen. JJ hikes me the bal . The defense is blitzing. JJ slams into a freshman safety, knocking him to the ground. The rest of my offensive line destroys the defense. Nice. The field’s wide open, but my wide receiver isn’t where he’s supposed to be.

“What the hel , Higgins?” I mutter to myself.

Dancing on my tiptoes, I scan the end zone and find Sam Henry instead and hurl the bal . It flies through the air, a perfect spiral, heading right where I wanted it to go. He catches the bal , spikes it, and does this real y stupid dance. Henry looks like a freaking bal erina. With his thin frame and girly blond hair, he actual y could be the star of the New York Bal et.

I’m gonna give him hel for his dance.

This is my senior year at Hundred Oaks High, and I’m captain, so I’m al owed to keep my players in line. Even though he’s my best friend, Henry has always been a showoff. His antics get us penalties.

Through the speaker in my helmet, I hear Coach Mil er say, “Nice throw. This is your year, Woods. You’re going to lead us to the state championship. I can feel it…Hit the showers.” What the coach actual y means?
I know you’re not going to blow it in the final seconds of the
championship game like you did last year.

The University of Alabama cal ed last week—on the first day of school—to tel me a recruiter is coming to watch me play on Friday night. And then a very fancy-looking letter arrived, inviting me to visit campus in September. An official visit. If they like what they see, they’l sign me in February.

I can’t screw this season up.

I pul my helmet off and grab a bottle of Gatorade and my playbook. Most of the guys are already goofing off and heading over to watch cheerleading practice across the field, but I ignore them and look up into the stands.

Lots of parents come to watch our practices because footbal is the big thing to do around here. Here being Franklin, Tennessee, home of the Hundred Oaks Red Raiders, eight-time state champions.

Mom always comes to practice—she’s been supporting me ever since Pop Warner youth footbal days, but sometimes she worries I’l get hurt, even though the worst thing that’s ever happened was a concussion. Sophomore year, when JJ took a breather, the coach brought in this idiot to play center, the idiot didn’t cover me, and I got slammed hard.

Otherwise, I’m a rock. No knee problems, no broken limbs.

Dad never comes to my practices and rarely comes to games. People think it’s because he’s busy, because he’s Donovan Woods, the starting quarterback for the Tennessee Titans. But the truth is he doesn’t want me playing footbal . Why wouldn’t a famous quarterback want his kid to fol ow in the family footsteps? Wel , he does. He loves that my brother, Mike, a junior in col ege, plays for the University of Tennessee and led his team to a win at the Sugar Bowl last year. So what the hel is Dad’s problem with my playing bal ?

After chugging a bunch of Gatorade, I go find Higgins, who’s already attempting to flirt with Kristen Markum, the most idiotic of cheerleaders. I take Higgins aside, avoiding her Darth Vader stare, and say, “Next time try finishing your route instead of staring at Kristen, wil you?”

His face goes al red before he nods. “Okay.”

Then I go pul a sophomore cornerback aside to speak privately. Duckett’s a couple inches shorter than me, so I put a hand on his shoulder and walk him down the sideline.

“On that last play, where I threw the long pass to Henry, you left him wide open. And I know how fast he is, but you can’t let that happen in the game. You were total y out of position.”

Duckett drops his head and nods at me. “Got it, Woods.”

I pat his back with my playbook as I take another sip of Gatorade, and wipe the dribble from my mouth. “Good. We’re counting on you Friday night. I’m sure Coach is going to start you.”

Duckett smiles as he puts his helmet under an arm and heads toward the locker room.

“Awesome job today, guys,” I say to a couple of my offensive linemen, then jog over to Henry and look up at him.

“Nice move faking out Duckett on that last play.”

“Would you quit it with the dancing?”

He grins at me, his green eyes lighting up as he drags a hand through his blond curls. “You know you love it.”

Smiling, I shove his chest. “Whatever.”

He shoves me back. “Want to come out to eat with us?”

“Oh, let’s see…Samantha and Marie and Lacey and Kristen.”

I stick my tongue out before saying, “Shit, no.”

“We’re going to Pete’s Roadhouse,” he says, wiggling his eyebrows.

Damn it. I love going there. It’s one of those restaurants where they let you throw peanut shel s al over the floor. Stil , I reply, “Can’t. My brother said he’d watch film with me tonight.”

Henry gets this hurt look on his face. “Come on, Woods. You know I want to go to Michigan more than anything, and I’m working hard, but you’ve been holed up every night since you heard that Alabama is coming to opening game.”

I suck in a breath. “Right—I’ve only got three days left to get perfect.”

“You’re already, like, one hundred times the quarterback your brother was in high school, you know.”

I grin at Henry. “Thanks,” I say, even though it’s not true.

He wipes sweat off his forehead with his red and black jersey. “How about I come over and watch film with you instead?”

“What about Samantha and Marie and Lacey and Kristen?”

He glances over at the cheerleaders. “They’d wait a year for me.”

I shove him again, and he laughs. “Nah, it’s okay,” I say. “I’m glad you’re going out with girls again, even if Kristen is Satan’s sister.”

“I’d never fool around with Kristen—I have standards, you know.”

“You in trouble again, man?” JJ asks in his deep voice.

“No one likes your
dancing
skills
,” JJ replies. He nods at me. “You in for the Roadhouse, Woods?”

“Can’t. Gotta study,” I say, holding up the playbook.

“I bet you’d go if they’d picked a place that makes real food, like Michel’s Bistro or Julien L’Auberge in Nashvil e,” Carter says in a ridiculous French accent, and JJ, Henry, and I burst out laughing at him.

“Hel no,” I say. “Al I need is a big slab of meat and a bunch of peanut shel s to throw al over the floor.”

“You’re not going either?” I ask Carter.

He focuses on his cleats before saying, “Can’t—it’s a practice night, remember?” He’s, like, the only person I know whose parents never say anything about school nights—it’s always about footbal practice and games in the Carter household.

I hate saying no to him. “If I get through four hours of Alabama film tonight, I’l come out tomorrow.”

“As long as you don’t bring your harem.” I jerk my head at the group of cheerleaders hovering ten yards away near a goal post, making googly eyes at the guys.

“But we’re a package deal,” he says with a laugh.

“That’s ’cause al you ever think about is your package,” JJ replies.

“And you don’t?” I snap and JJ punches my shoulder, causing me to stumble backward. We al crack up again.

And then two cheerleaders come up and start fawning over Henry and JJ. What took them so long?

JJ and Lacey start kissing as if winning the state championship depends on it, and Samantha intertwines her fingers with Henry’s and smiles up at him. Then Kristen and Marie come over, because cheerleaders travel in packs.