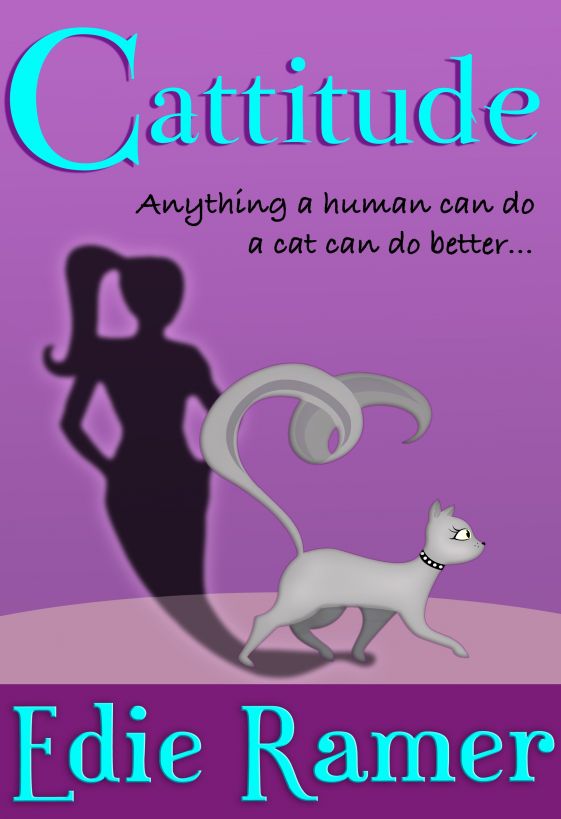 “
Cattitude is a
magical tale that you won’t soon forget. Edie Ramer has a writing
voice that charms, and she pulls the reader right into Belle’s
amazing world.”
-
Cynthia
Eden
,
New York Times
bestselling author

It’s all in the
Cattitude...

After Belle the cat switches bodies with a
psychic on the run from a murderer, she wants her perfect cat body
back instead of this furless human one. But she doesn’t count on
falling in love with her former owner. Or that a CEO and a beauty
queen want to use up her nine lives. Now is her chance to prove
anything a human can do, a cat can do better.

All rights reserved by author

Excerpt from
Must Worship Cats

The characters and events
portrayed in this book are fictitious. Any similarities to real
persons, living or dead, are coincidental and not intended by the
authors.

This ebook is licensed for your personal
enjoyment. No part of this book may be used or reproduced in any
manner whatsoever, including the Internet, without written
permission from the author except in the case of brief quotations
embodied in critical articles and reviews.

A muffled shriek from the office next door
rudely jerked Belle awake. Curled on the desktop, she recognized
the voice, yawned, and settled back down to finish her nap. Less
than a tail length away, Max continued typing, his human hearing
inferior to hers. A moment later, footsteps tapped toward their
office, fast and angry.

Belle opened her eyes to a slit. This was her
castle and she needed to be vigilant.

A tall, blond woman entered, carrying the hot
drink that she and Max shared a liking for. She shot Belle a glare,
then plastered a smile on her face and her walk changed, her body
swaying catlike, steam snaking up from the drink.

Max didn’t turn from his computer, but the
fur on Belle’s spine lifted. Caroline’s poor-widowed-me demeanor
didn’t fool Belle. Beneath the flowery perfume, she detected the
stench of a predator.

“I brought you coffee.” The woman’s chirpy
voice reminded Belle of a bird—a bird she wanted to catch and bite
its head off. Ignoring her, Caroline set down the mug and hovered
over Max.

Frowning at his computer screen, he thanked
her. Only when she leaned her hip against the desk did he turn his
head.

“Your cat’s giving me the evil eye.”

That wasn’t all Belle wanted to give her.

Max reached past Caroline’s hip to stroke
Belle’s ear in the perfect spot. She meowed and pushed the top of
her head against his palm, stamping his skin with her scent.
Peering at Caroline through slitted eyes, she conveyed her thought:
He’s mine. Leave him alone.

If Max found someone to love who loved him
back, she wouldn’t mind. But his cousin’s widow wasn’t worthy of
him. In Belle’s four years with Max, he hadn’t brought home one
woman worth a bowl of sour milk.

“Belle doesn’t give the evil eye. She’s a
sweetheart, aren’t you, Belle?”

Belle purred her agreement, her body rumbling
and vibrating. She dropped onto the desk and rolled over, exposing
her belly, her vulnerable spot.

Caroline sighed and looked sad, with her
eyebrows and shoulders drooping. “Max, you know I don’t like to
complain—especially after all I owe you—but your baby peed on my
new book of fabric samples.”

His eyebrows drew together. “Belle? She’s
never had a pissing problem before.”

“Then she’s doing it on purpose.” Caroline’s
voice sharpened. “The last time it was a hairball on my scarf.”

Belle rolled onto her belly in order to keep
an eye on her enemy, this woman who invaded her castle and was a
liar. Not about the peeing and the hairball, but Belle suspected
she lied about something much worse.

“It’s not anything I’ve done to her.”
Caroline flipped her hair behind her shoulder and arched her back,
reminding Belle of a strutting turkey spreading its tail feathers.
“Animals love me.”

“I’ll pay for the samples.” Max’s tone was
clipped and his eyebrows drew together.

Caroline recoiled, then flapped her hands as
if she wanted to fly backward in time and swallow her words.
“You’ve done too much already. I won’t take another penny from you.
You’ve been my guardian angel since Emery’s accident. Without you,
I don’t know what I’d do.”

Belle knew. Find another man to take care of
her. A man who wasn’t Max.

“Forget about it. It’s no big deal.” Max
stroked his fingers along Belle’s jaw.

Her body rumbled with purrs and she rubbed
her teeth against his fingers.
More, more. I want more.

“You spoil that cat.”

“We all deserve a little spoiling.” Max
stopped petting Belle to gesture at the coffee. “You don’t have to
do this. You’re decorating the house, not waiting on me.”

Caroline set both buttocks on the desk, and
Belle’s claws extended again. This was her desk to sit on. No one
else’s.

The blond leaned toward Max and gazed at him
beneath lowered eyelids. “Next time I’ll remember not to bring you
any.”

“Eeek!” Caroline jerked off the desk.

“See! She’s jealous.” Caroline glared at Max.
“And you encourage her.”

He stopped laughing with his mouth, but his
shoulders shook. “Sorry.”

She opened her mouth, then gave Belle the
same glare as when she entered the room, pressed her lips together
and stomped away.

Belle butted Max’s arm to show her approval.
A bug scurrying across the floor caught her attention. She leapt
off the desktop in a long arc and landed a foot from the door. The
many-legged insect scuttled into the office Caroline was using,
inconveniently located next to Max’s.

Belle followed the bug. Though it was going
into the enemy’s camp, she was fearless.

“Stay away from me, you damn cat,” Caroline
said in a low voice. She was bending over a large desk covered with
swatches of material. Her gaze darted to the doorway, as if to make
sure Max was out of sight and earshot. “Come any closer and you’ll
be road kill.”

Belle turned her attention from the bug to
the bigger and more dangerous being.

“That’s a good idea.” A small smile formed on
Caroline’s face. “Road kill cat. It’s what you deserve for using my
office as your litter box.” The smile disappeared, her features
hardening. “And for coming between me and Max every time I’m making
headway. If you wandered outside and something happened, who would
think of blaming me?”

They didn’t blame you when Emery fell off
the trail while you were hiking.
Belle’s stare held Caroline’s
gaze.
Did they?
When Caroline didn’t say anything, she
repeated the mental command.
Did they?

“After all,” Caroline murmured, “no one
suspected me when I pushed Emery off the trail.”

Adrenaline surged through Belle. She knew it!
She swiveled her neck one hundred eighty degrees, but Max wasn’t
there. If only he understood cat talk. Of course, if people
understood cat talk, then cats would be queens and kings of the
world and life would be orderly and sane.

“Why did I tell you that?” Scowling, Caroline
grabbed a stapler and waved it in the air. “Get out or I’ll staple
you to the wall.”

The bug landed on the desk in front of
Caroline. She made a sound like a squeaky door and slammed the
stapler on it.

Belle zipped out of the room, quivering with
triumph. Her curiosity was satisfied. Once again she’d been
right.

If she suspected that Caroline would hurt
Max, she would have to do something about it. But what Caroline
wanted from Max, he wasn’t going to give her. No matter how much
coffee she brought Max, he loved Belle more than Caroline.

Which was just as it should be.

The door to the main house was open, and she
dashed through it. Late last night, she’d heard Ted, Max’s brother,
clomping into the house. He worked in a bar, whatever that meant.
Humans did odd things.

She’d see if Ted was awake. Next to Max, Ted
gave the best back rubs.

Her tail swaying in the air, she padded along
the hall, past the kitchen and the big room where they watched TV,
past the bedroom Max’s sister Tory used when she visited. The rest
of the time, the bed belonged to Belle.

Wasn’t every soft place in the house a
potential napping spot for her?

Ted’s bedroom door was open a couple inches.
She stuck her nose into the room. His scent wafted to her nostrils
and she heard the creak of the bedsprings. She nudged the door open
wider and flowed through, then took a flying leap, landing on the
bed with a thump.

The lump beneath the covers didn’t stir. Only
Ted’s neck and head stuck out, facing the wall. She sniffed the
back of his head. Yesterday morning, she smelled a woman on him,
but not this morning. In the four years she’d been with Max, she’d
smelled a lot of different women on Ted. Once in a while, she
smelled one on Max too.

She didn’t mind sharing—much—but if she
smelled Caroline on him she’d have to do something. Caroline might
push him off a trail too, and who else knew how to massage her on
the perfect spot?

Ted turned over and opened his eyes. “Hey,
Belle girl.”

She meowed. Anticipating his caresses, she
kneaded the blanket with her front paws, her purr reverberating. He
laughed and reached out.

“Ted!” Max called from the hall.

Yes, what?
She cocked her head as Max
strode into the bedroom. Ted pulled his hand from her back and
pushed to a sitting position.

Groaning, Ted threw the cover aside, on top
of Belle. “Shit. That’s the second time this month. On her next
birthday, I’m enrolling her in AAA.”

“You think she’ll use it? With two sons
nearby?”

Ted smacked his forehead. “What the hell was
I thinking? The smart thing to do is be like Tory and move a
thousand miles away.”

“I moved into the next county.” Max’s voice
sounded dry to Belle with her ultra-sensitive hearing. “She
followed me.”

“You’re the oldest.” Ted shoved his feet into
his tennis shoes.

“Yeah.” Max’s voice lowered to a rumble that
reminded Belle of far away thunder before the storm. “The
oldest.”

Belle jumped off the bed and rubbed her cheek
against his pant legs. Rose, Max’s mother, was always calling him
to ask for help. Last week it was her toilet, the week before her
condo roof was leaking.

Belle purred her understanding. It was too
bad the rest of the world wasn’t as resourceful as her.

He bent to pet her. “At least Tory only wants
money from me. That’s easy.”

Ted snorted and sat on the bed to tie his
shoes. “Easy for you.”

“Don’t start. It’s better than doing a job I
hate.”

“One college degree wasted.” Max
straightened. “Come and work for me. Don’t make me ask again.”

Ted stood. “You mean leech off you, like
everyone else. No thanks.”

“Later, okay? After we take care of Mom and
I’ve gulped down a gallon of coffee.”

They strode into the hall, Max first. Belle
thought about following. Instead, she lifted her back leg in the
air and groomed herself. Satisfied with her cleanliness and beauty,
she put down her leg and stretched. Time for a nap.

She jumped on Ted’s bed again, his scent
still fresh, the sheets still warm. After circling once, she curled
into a ball, her head on his pillow, her eyes closed. Eating,
drinking, purring, bathing, exploring, playing, putting her scent
on anything that moved and didn’t move and, finally, uncovering
murderers. She’d had a full morning and needed her rest for the
afternoon.

Anything could happen, and someone had to
watch over her house and her humans.