Read Caught in the Cogs Volume One Online

Caught in the Cogs Volume One 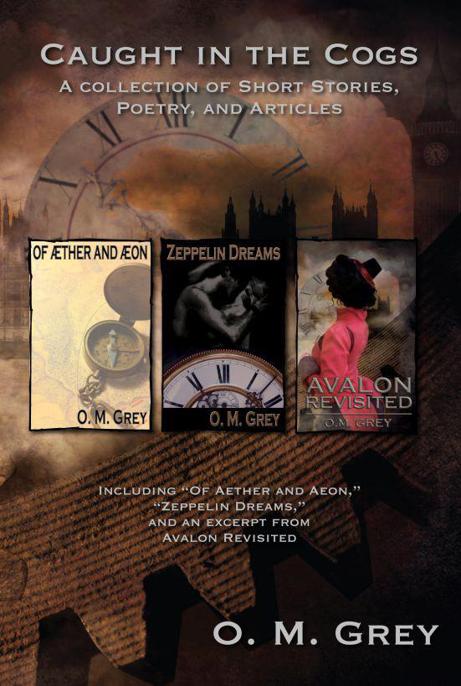 Caught in the Cogs: Volume One

Caught in the Cogs

These are works of fiction. The characters and events in this book are fictitious. Any similarity to real persons, living or dead is coincidental and not intended by the author.

For more information, go to

Caught in the Cogs

Of Æther and Æon

She watched him move across the deck as she had a thousand times before. Every day, just before muster, he walked this way. And every day, she watched from behind the main canon, peering around the cascabel, hoping that one day he would see her. Notice her. Love her. If only Jonah would look at her, he would see.

It was the middle of a very long war. It had begun before

Constance had even joined the RAN nearly a decade ago. She had served as the HMS Æther’s Chief Navigator for just over three years now. How time flies.

Jonah was above her in rank, but not by much. Lean and strong, his body moved with grace, and Constance felt clumsy. Even she, a woman, didn’t move with such grace and poise and confident purpose. He had dark brown hair, deep chestnut, that extended past his temples in cocoa colored mutton chops, following the curve of his strong jaw. The leather baldric that ran from his right shoulder to left hip accentuated the breadth of his muscular chest, even beneath both the shirt and regulation waistcoat.

“Connie,” a deep voice said. “Let’s go, we’ll be late to the morning muster and then there will be hell to pay.”

“Morning, Samuel,” Constance said without taking her eyes off Jonah, who was talking with another officer on the starboard side of the airship. He laughed, and Constance found herself catching her breath at the sight of his brilliant smile. His cheek held the slightest suggestion of a dimple when he smiled.

Although they worked in close proximity, he as the Chief Engineer and she as the Chief Navigator, she effectively hid her feelings for him while on the job. It was only in the few moments of the morning that she could let her guard down.

“Mornin’, Con. What’s got yer interest?” Samuel followed her gaze to the handsome officer across the way. “Ah. Of course. Shoulda known.”

Constance blushed and forced herself to look away. She turned to Sam and had to shade her eyes from the rising sun behind him. During the day, the great balloon that held the dirigible aloft blocked out most of the sun, but the during the early morning and the late evening, it shone between the great blimp and the top deck of the battleship. The movement felt too familiar.

“Quite,” Constance agreed. “Let’s move.” She stepped out from behind the canon and, after a quick glance to check that the seams of her knee-high spats were running straight up the center of her shin, strode across the deck toward muster. She fell in and stood at parade rest, her feet shoulder width apart and hands folded at the small of her back over the lacing of her regulation steel-boned corset, just above the small bustle, a tie-on piece that covered the derriere and gave the appearance of the bustle sway that was so popular down below. It was a recent addition to all women’s uniforms, said to keep the men from being distracted. Although Constance felt that it did more to draw the eye.

If only it would draw his eye.

“Attention!” the first mate yelled, and the entire mustered block snapped to attention. Constance stood stiffly with the rest of her crew and listened to the Captain speak.

“At ease,” the Captain said, and the entire company returned to parade-rest, synchronized. “Today is an important day,” he continued. “Earlier this morning, the Communication Officer’s team intercepted a message from the enemy. I am confident that this piece of information might be just what we need to sway this war back into our favor. And it’s high time, too!”

Constance felt a wave of hope rush through her core. The energy of the entire muster changed, and she felt that, too. Out of the corner of her eye, she chanced a look at Jonah, and had to catch her breath when she saw that he was looking at her as well! She snapped her eyes back to the front and realized she had no idea what the Captain was saying anymore. The blood rushed into her cheeks, warming them against the cold air. The rising sunlight caught the lens Jonah’s goggles atop his flight cap, so she knew he was still looking back at her.

“Dismissed” was the next thing that registered in her distracted mind. She took the opportunity to duck away in the opposite direction from Jonah, hoping that Samuel would tell her what she had missed. She took the long way around to the Chart House, past the great engine cogs that pierced the floor of the port-aft deck and up the back stairs past the Signal Bridge. The Chart House was empty. Samuel was not yet here, and the night watch, already off duty, had left for the day. Bending over a large map spread over the center table, she commenced work immediately.

“Interesting turn, no?” Samuel asked as he stepped inside the small room just above the main deck in which they both worked.

“Indeed,” she responded, not wanting to admit that she had missed most of what the Captain said. Surely it would come up in conversation.

Samuel moved a tarnished astrolabe off the counter left over from the night watch and picked up a brass sextant. While Samuel took the morning readings, Constance calculated their current location on the map. She adjusted the divider based upon their speed, air velocity, and cross wind readings set down by the night watch and then walked the divider across the map from the last recorded position to their current one.

“What did you think about the Captain’s lecture?” Constance asked as she wrote the new figures down in the navigational log, but Samuel didn’t answer. He stood at the front window looking through the sextant’s eyepiece, then readjusted its arm and looked through the eyepiece again.

“Somethin’ ain’t right,” he said. “According to these here readings, we are thirty-three degrees off course.

“That can’t be right,” Constance said dropping the divider and rechecking her figures. She pulled the brass compass out from the tiny pocket on the front of her corset. “Unless the night watch wrote down the wrong calculations again.” Sure enough. The compass confirmed it. She snapped it shut and placed it back into its pocket. Its long chain bounced against the steel boning as Constance moved over to Sam. Taking the sextant from him and looking through it herself, she confirmed it once again. “This is unacceptable,” she said, thrusting the sextant back into Samuel’s hands. “Sam, I think it’s time we split up. You will have to take the night shift with Airman Hannigan, and Sergeant Fredricks shall take the day shift with me. This is the third time this month, although it’s by far the worst.”

“Aye aye, Lieutenant Commander McCoy” Sam said with more than a hint of sarcasm. He obviously didn’t want the night shift, but since Constance outranked him, he knew he couldn’t argue.

“You know we cannot afford mistakes like this, especially not after what the Captain said this morning. This might be the turning point for the war,” she offered, as it was truly the only thing she heard, “and we do not want a navigational error to jeopardize this mission.”

Constance pulled her bound tablet out from a pocket in her belt and scribbled down some new headings. It always amazed Samuel just how fast she could calculate even the most complex formulas. She ripped the last page with the new headings out of her bound tablet and, handing them to Samuel, said, “Fix this. Fast.”

“Aye aye,” he said again, without the sarcasm.

Constance went over to the stock cabinet to get a new tablet, but before she could open the door, a deep, melodic voice said, “Lieutenant Commander McCoy, might I have a moment?”

It was Jonah. Her mind filled with a mixture of pleasure and fear. Perhaps he had come to berate her about the navigational error, although that would not be the responsibility of the Chief Engineer. She forced herself to be the officer she was and responded, “Of course, Commander Beaufort.” Then continuing to Samuel said, “Sergeant Whitford, please relay the new headings to engineering.” Samuel nodded in reply and moved over to the sound telegraph they used to communicate with other parts of the ship. Putting the flared earpiece to his ear and speaking into the similarly flared mouthpiece, he said, “Engine Room.”

Jonah stepped sideways out the doorway in which he had been standing and put his hand out, inviting her to go before him. She caught her breath, no matter how much she tried not to, when she passed so closely in front of him. The two walked down the front stairway and up toward the foremast, where he stopped her.

He just looked at her and after a moment, smiled.

“There was something you wanted to speak with me about, Commander Beaufort?” Constance said, folding her hands in front of her, as if she was a proper lady from the ton. She took very conscious deep breaths and reminded herself again that she was an officer in the Royal Air Navy.

“Of course, Constance. But, please call me Jonah. We have worked together for so long,” he started.

“Well,” he said rubbing his neck and looking out over the edge of the ship into the horizon. “In light of what the Captain said this morning, I seem to have new hope regarding this war and... life, I suppose.” He laughed a little here, and Constance felt her heart jump in her chest when the faint dimple appeared along with the joyous sound of his laughter. “I really should’ve done this long ago, but things have been quite dire with the war over the past months. Still, now with this new hope.” He shuffled his weight from foot to foot and laughed again.

“Anyway, what I’m trying to say is–Would you like to have dinner with me tonight?”

His gaze turned down to her with the question, and he bit his lip, which only made to deepen the dimple, as he waited for her response.

Constance had not realized she had been holding her breath for the last several seconds until she let it out. Then she took another one and held it again.

Boomer's Big Surprise by Constance W. McGeorge
Billionaire Novelist's Fiery Debutante by Nic Saint
Hail and Farewell (The Lakeland Murders) by J J Salkeld
I Was Waiting For You by Maxim Jakubowski
Wrath of the Furies by Steven Saylor
License to Dill by Mary Ellen Hughes
Under and Alone by William Queen
Death in a Major by Sarah Fox
The Chocolate Jewel Case: A Chocoholic Mystery by Joanna Carl
Shattering Inside by Lisa Ahne