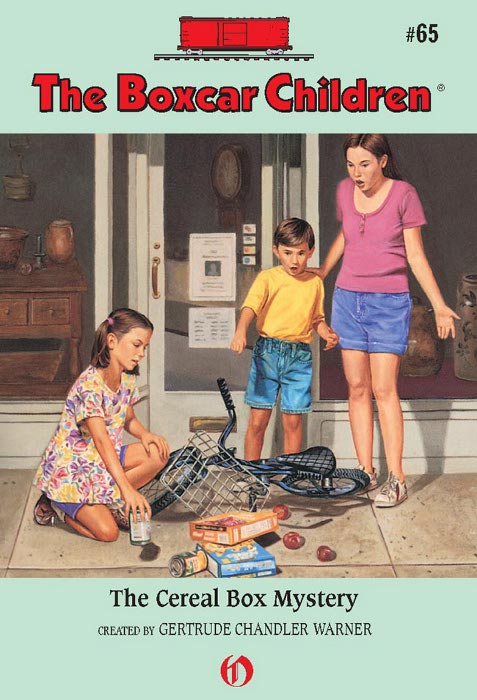 1 A Box of Silver Frosted Stars

4 Party Plans and a Mystery

5 An Empty Box and a Silver Star

6 A Spy in the Woods

8 A Birthday Present and a Clue

10 A Special Badge for a Real Detective

M
rs. McGregor was making a list for the Alden children to take to the grocery store. “Anything else?” she asked.

“Cereal!” cried Benny Alden. “You didn’t forget the Silver Frosted Stars, did you?”

Mrs. McGregor looked at the grocery list. “No, I didn’t, Benny. Your favorite cereal is right at the top of the list.”

She handed the list to fourteen-year-old Henry Alden. He folded it and put it in his pocket.

“I just need two more silver stars from inside the cereal boxes,” Benny said. “Then I can send away for my very own silver star detective’s badge.”

Violet, who was ten, smiled at her six-year-old brother. “Even if you don’t find a star inside the cereal, you’ll find a prize, won’t you, Benny?” she asked.

Benny nodded. Then he said, “If it is a really good prize, maybe I will give it to Grandfather for his birthday.”

The others laughed. Their dog, Watch, who was curled up on his dog bed near the door, stood up. He wagged his tail and barked.

“No, Watch, you can’t come with us,” Henry said. “We’re riding our bikes and it is too hot for you to run alongside.”

“But we’ll bring you a present,” Benny promised. He petted the dog on the head.

“Yes. A brand-new col —” Jessie began, but Benny stopped her.

Benny put his hands over Watch’s ears. “Shhh! It’s supposed to be a surprise! You have to keep your lips zipped!” Benny pretended he was zipping his lips shut.

“Right,” said Jessie, and pretended to zip her own lips shut, too.

Saying good-bye to Mrs. McGregor and Watch, the Aldens got on their bicycles and rode through the streets of Greenfield to the grocery store downtown.

In the cereal aisle of the grocery store, Benny went straight to the Silver Frosted Stars. He studied all the boxes closely. He took each box off the shelf and gave it a gentle shake. Finally, he said, “This is a good box.” He put the cereal in the shopping cart.

Henry pushed the cart a little way down the grocery aisle.

“Wait!” said Benny. He held up two more boxes. “These are good boxes, too.”

He looked hopefully at his brother and two sisters. “We could get three boxes of Silver Frosted Stars,” he said. “I promise to eat all three.”

But Violet, who always liked to be helpful, said, “I could help you eat the cereal, too, Benny.” 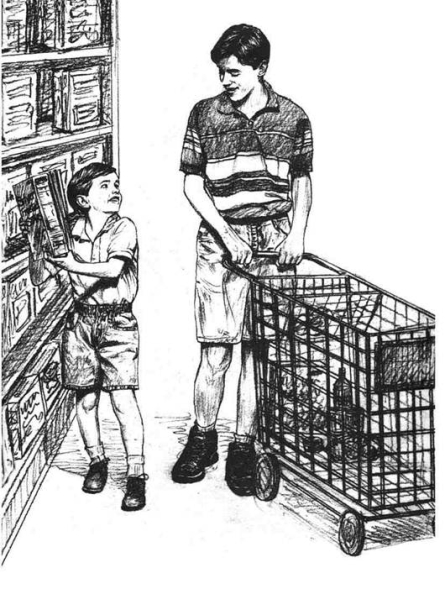 Henry and Jessie exchanged glances. Henry said, “I guess I could eat a few bowls of Silver Frosted Stars.”

“Hooray!” cried Benny, and he skipped happily to the shopping cart to add two more boxes of his favorite cereal.

The moment they had left the grocery store, Benny opened one of the boxes of cereal. “Look!” he cried. “A silver star! Now I only need one more to send away for my special detective’s badge.”

“Good for you, Benny,” Henry said as he and Jessie loaded grocery bags into the baskets of the bicycles. “But you can’t open any more boxes of cereal until you finish that one.”

“I’ll start right now,” Benny said. He took a handful of cereal from the box and began to eat it.

Benny grinned. “It tastes good this way, too!” he assured her.

They walked along Main Street, past the hardware store and the bookstore. Outside the bakery, Benny stopped and pointed. “Look at that cake,” he said.

Benny put the box of cereal back in the bag in one of the bicycle baskets.

“It’s a birthday cake,” said Henry. “A cake like that would be nice for Grandfather’s birthday.”

Violet said, “Mrs. McGregor could make a cake like that, especially if we helped.”

“With a cake like that, you need a party,” said Jessie.

The four Aldens looked at one another. Then Henry said, “Is anyone else thinking what I’m thinking?”

“A party!” Benny crowed. “We can have a party for Grandfather’s birthday.”

Everyone began to talk at once. They were so excited that they almost forgot about Watch’s surprise.

Benny and Violet chose a new red collar for Watch and even ordered him a new tag with his name and address and phone number on it. As they walked out of the store, Benny said, “It’s too bad the tags aren’t shaped like stars. Then Watch could be a detective, too.”

Ahead of Benny, Jessie stopped so suddenly that Benny bumped into her.

A
police officer raced past the Aldens, almost crashing into Henry. She didn’t even see him.

The police officer disappeared around the corner.

The Aldens looked back in the direction from which the officer had come. They saw a man and a woman standing outside an antiques store. The woman pointed and the man waved his arms in excitement.

“There must have been a robbery,” Jessie said. “Let’s go find out.”

The Aldens hurried up to the two people outside the store. “What happened?” Jessie asked as they got closer.

The woman turned. She was a short woman, not much taller than Henry, with round blue eyes and long dark brown hair pulled into a French braid. Strands of hair were sticking out from the braid and one sleeve of her shirt was torn. “A robbery!” she gasped. “I tried to stop him, but he got away. He tore my shirt!”

“Did the robber wear a mask?” asked Benny.

The man shook his head. He was a small, thin man wearing thick glasses. “I’m Will Bellows. I own Antique Treasures.” He pointed to the sign above the shop. “This thief was quite bold. He just grabbed something and ran out when I was helping Ms. Smitts here and another customer. Ms. Smitts was very brave. She ran after the thief and caught him right outside the door, but he pulled free.”

Ms. Smitts said, “I don’t know . . . it all happened so fast. He wasn’t very tall. But he had a hat pulled low over his forehead and a scarf pulled up around the lower part of his face. He might have had a mustache. He pushed me away and ran.”

Mr. Bellows couldn’t remember, either. “He stayed in the darkest part of the shop,” he said. “And he kept his shoulders hunched and his face turned away. He had on a tan raincoat and a brown hat, but that’s all I remember. I only noticed the raincoat because it wasn’t raining outside. I thought that it was odd.”

“What was stolen?” Violet asked.

Mr. Bellows clapped his hand to his forehead. “The rings!” he said. “I left the tray of rings I was showing to a customer right out on the counter.”

Turning, Mr. Bellows rushed back into his shop with the Aldens and Ms. Smitts behind him. Inside, they found a small room filled with all kinds of old furniture, lamps, and books. A glass case displayed jewelry. An anxious-looking young man with round wire-rimmed glasses was hovering near one end of the glass case.

“Did you catch the thief?” the man asked.

“Who are you?” Benny asked.

The man peered at Benny through his glasses and said, “I’m David. David Darden. I’m trying to find an engagement ring.” He blushed slightly. Then he said to Benny, “Who are you?”

Meanwhile, Mr. Bellows had hurried over to the blue velvet tray at David’s elbow. “They’re all here,” he said, sounding relieved. “All the rings are still here!”

Now David Darden looked surprised and a little hurt. “Of course they are. I stayed in the shop to make sure nothing would happen to them.”

“Oh,” Mr. Bellows said. He looked slightly embarrassed. “Sorry. Thank you.” Then he glanced toward another corner of the store and his face grew grim. “Oh, no,” he said.

“The thief took the most valuable thing in the store — a necklace set — a matching necklace, bracelet, and ring.” Mr. Bellows pointed toward a small case. “They were especially valuable because they were made of rubies.”

The Aldens went over to the small case. “The lock isn’t broken,” said Henry. “Did it have a key in it?”

“Could the thief have picked the lock while you were helping other customers?” asked Henry.

“Or maybe you left it open the last time you unlocked it,” Violet said.

“Are you sure?” asked Mr. Bellows.

“Yes,” said Mr. Darden. “Right after you showed the jewels to me.” He smiled and shook his head. “They were beautiful, but much too expensive for me. I just want an engagement ring.”

“It’s true,” Ms. Smitts chimed in. “I was here when you showed the jewelry to Mr. Darden. I saw you lock the case, too.”

“It’s amazing that anybody could pick that lock in that short a time,” said Mr. Bellows. He looked very unhappy. “They were particularly fine rubies. I was delighted when their owner offered to sell them to me.”

“Yes,” said Mr. Bellows. “And these were particularly beautiful and rare, a perfectly matched set.” He sat down heavily in a nearby chair. A puff of dust came up around him, but he didn’t seem to notice. “Oh, dear. Oh, dear,” he said. “I hope they catch the thief.”

Ms. Smitts laughed. Benny put his hands on his hips. “We can,” he said. “We’ve solved lots of mysteries.”

Although she stopped laughing, Ms. Smitts still kept smiling. The Aldens could tell that she didn’t believe Benny.

Mr. Bellows shook his head. “If someone doesn’t catch the thief,” he said, “I’m ruined.”

“We’d better go,” said Henry. “Let us know if we can do anything to help.”

Fumbling in his pocket, Mr. Bellows brought out a small notebook and a pencil. He said to Ms. Smitts and Mr. Darden, “You’d better leave your names in case the police want to talk to you.”

Ms. Smitts gave Mr. Darden a suspicious look. “Well,
I
don’t have anything to hide,” she said. She took the notebook and pencil and wrote “Tori Smitts” and her phone number in the notebook. Reluctantly, Mr. Darden wrote in his name, address, and phone number as well.

Then Ms. Smitts and Mr. Darden walked out of the store with the Aldens. When they got outside, Benny raised his hand and pointed. “Oh, no!” he cried. “My bike. Look what happened to my bike!”

Benny’s bike was no longer parked where he had left it. It was lying in the middle of the sidewalk, with groceries spilled out all around it.

Quickly the Aldens hurried toward the bicycles. Mr. Darden and Ms. Smitts went with them. They helped the Aldens pick up the scattered cans and boxes from the grocery bag.

“There,” said Ms. Smitts. She looked inside the basket and shifted the open box of Silver Frosted Stars. “It looks like one of your boxes of cereal got broken open when your bike fell over. You want me to throw it away?”

Summer Accommodations: A Novel by Sidney Hart
Faith of My Fathers by John McCain
The Dilettantes by Michael Hingston
Tahoe Blues by Lane, Aubree
Don't Stand So Close by Luana Lewis
Reflections of the Wolf by Lori King
The Poppy Factory by Liz Trenow
What a Doll! by P.J. Night
When We Were Saints by Han Nolan
Her Own Devices by Shelley Adina