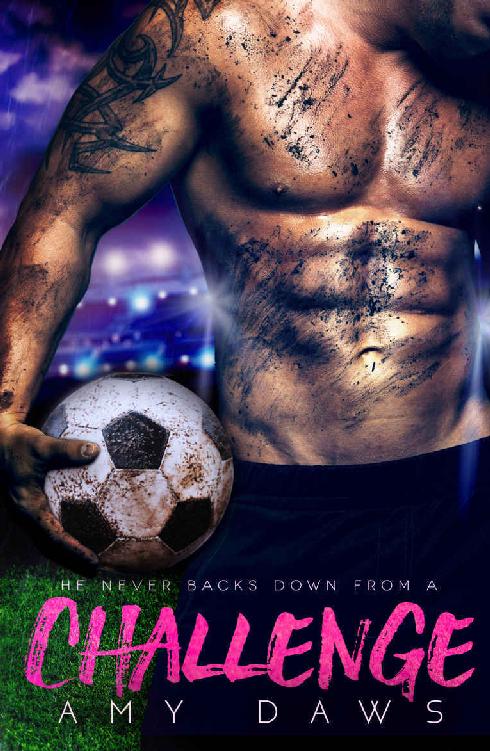 This book is licensed for personal enjoyment only. No part of this book may be reproduced in any form, or by any electronic or mechanical means, including information storage and retrieval systems, without written permission from the author. The only exception is by quoting short excerpts in a review. If you’re reading this book and did not purchase it, please go to www.amydawsauthor.com to find where you can purchase a copy. Thank you for respecting the hard work of this author.

This book is a work of fiction. Names, characters, places, and incidents are products of the author’s imagination or are used fictitiously. Any resemb
lance to actual persons, living or dead, events, or locales are entirely coincidental.

I picked the one sport you don’t watch to write a novel around.

“
C
OME ON,
C
AMDEN,”
T
ANNER GROANS
, strolling into the kitchen and eyeing me at the table. He instantly deflates when he sees I’m nose deep in my book. “We’ve only got an hour before we need to leave. You need to get your
ritual
over with before it gets too late. Dad crawls the walls when we’re late for warm-ups.”

My latest James Patterson, Cross Series novel thumps closed as I gaze back at my twin brother’s face. The dreary London daylight sheds little light on what emotion he’s portraying beneath all those unkempt facial pubes. I shake my head. “Don’t even consider judging my ritual. You’re the one looking like a blonde Hagrid.”

He smiles and strokes his beard. “Aww, that’s the nicest thing you’ve ever said to me, Cam. Do you really think so? Maybe if I go for a full Dumbledore beard, our team will be promoted to Premiership.”

I roll my matching blue eyes in response to the eagerness in his. Tanner and I aren’t identical twins, but back when he had trimmed blonde hair instead of the shaggy mess he sports now, we even fooled each other. I once watched a taped match for forty minutes before I realised I was watching Tanner kick a football down the pitch instead of myself. Although he has a lot more ink than me nowadays.

Our other two brothers, Gareth and Booker, don’t look like us at all. Gareth is the oldest and Booker is the youngest. They take after our dad with their darker hair, but since we all grew up playing football, our builds are quite similar. Years of fieldwork policed by our dad and an intense weight-lifting regime made us the largest footballers on most pitches.

To know the Harris name in regards to European football is like knowing the Mannings of American football. Football is more than our national obsession, it’s the Harris way of life. So much so that Tanner hasn’t cut a hair on his head since the start of our winning streak four months ago. The wanker even wears a pretentious sweatband to keep his hair out of his face during matches.

Having a twin in general is a royal pain in the arse. Having him on the same team is like a bad case of haemorrhoids. Having him playing the same position is like a jagged butt plug rammed in at the wrong angle.

However, his recent affection for hair has made my life ten times easier when it comes to the sporting game of women. Shockingly, the birds don’t tend to drop to their knees for the hobo-looking players. My clean-cut appearance, on the other hand, has them quivering with need. Trust me, I’m not complaining.

“You’re still not going to shave?” My eyes zero in on two scraggly pieces hanging lower than the rest. “Trim it, maybe? Wash it? I can smell it from over here. It smells worse than Booker’s boots.”

Tanner’s eyes fly wide. “I do wash it. I even got a fancy oil for it in Shoreditch last week. But I’m
not
shaving it.
Ritual
, Camden,” he adds pointedly. “Shall we talk in depth about what you do for yours?”

I lift my brows but he doesn’t stop long enough for me to let loose a snappy retort. “Just get moving. Booker will be here soon to pick us up.” In two steps, he has me by my shoulders and pulls me out of my seat. He all but shoves me down the hallway toward the toilet.

“I’m going, all right? There’s no need to get grabby.” My nose crinkles as I look over my shoulder and cringe away from his face. “And get that thing away from me.”

His hold on me tightens as he attempts to rub his beard on my face, but I manage to duck into the loo just in time to slam the door on him. He laughs in triumph, most likely because he achieved his goal of getting me to the toilet. God, my brother gets right up my nose. Living with him is trying at best, but I remind myself for the thousandth time this week that it was for a good reason.

About six months ago, our teammate Will found himself in a spot of trouble. Apparently he’d been silently losing a battle against his gambling addiction. We had no idea he even had a problem. He came to us and said he was six months behind on rent. His landlord was not only threatening to press charges, but also call our manager to get Will removed from the team. Since our dad is the manager for the team we all play for, we knew that was a highly probable outcome.

Tanner and I didn’t even have to exchange words before we agreed to pay the back rent. Then, when Will wanted to move home to get more help from his parents, we offered to take over his lease.

It was a good move for us regardless. Tanner and I turned twenty-five two months ago, and living at home with our dad was getting harder and harder to explain. In our defence, Dad’s house is more similar to a posh hotel than a family home—a brown-brick mansion in Chigwell, just outside of East London. Aside from the times when our sister, Vi, came around to make us all dinner, it was football headquarters for all of us. We even held team meetings there.

But now, being bunked up with a blonde Jesus in a smaller-than-I’d-like, two-bedroom flat in Bethnal Green sure doesn’t seem as exciting as it did initially, even if we do live close to the pitch and above a tattoo shop and a pub.

In no time at all, I’m in the shower letting the hot, steamy water pound against the muscles on my back. Just as I do before every match, I close my eyes tightly and begin my highly-focused, visualisation technique that’s become a ritual I can’t seem to function without doing.

I picture the crowd chanting my name inside a packed Tower Park Stadium.

Tower Park on match day is unlike any other pitch in the entire world. If I wasn’t already hard, I’d be hard now.

I envision the softness of the grass beneath my feet. The spongy give of that perfect pitch. The gentle sinking of my studs. The fresh scent of newly cut grass. The nostalgic stench of hot dogs and stale lager lingering in the stands.
Christ, it’s fantastic.

Back in reality, my hand reaches low to grip myself. I slowly stroke my hardened shaft and relish in the feel of the soap over my slickened skin. I press my head against the side of the tiled wall and transform the sound of the hot water into the roar of the crowd cheering me down the pitch.

Instantly, I feel the build.

I squeeze harder and speed up my strokes. I visualise myself zigging past two midfielders who go crashing into each other in mighty disappointment. Then I juke out a defender who falls down to his knees in defeat. When I approach the goalie, he decides to come out of his box. I smile broadly.

“Never come out of your box with Camden Harris in your line of vision.” My husky voice reverberates in the bathroom with a level of excitement I always get before a big score.

I pull back my booted foot and shoot.

Dead silence as the ball soars through the air. The entire stadium waits on bated breath in hopes of hearing that utterly orgasmic slap of leather hitting nylon.

The crowd erupts in celebration…

…along with my cock.

I let out a groan as my hot load sprays against the wall of the shower. The release is intense. Footballing orgasm perfection. My abs bunch tightly as I shudder with aftershocks and pump a few more times, flinching at the sensitive tip firing off at every nerve ending. “Fucking goal, Camden. Well done.”