Read Chance and the Butterfly Online

Chance and the Butterfly 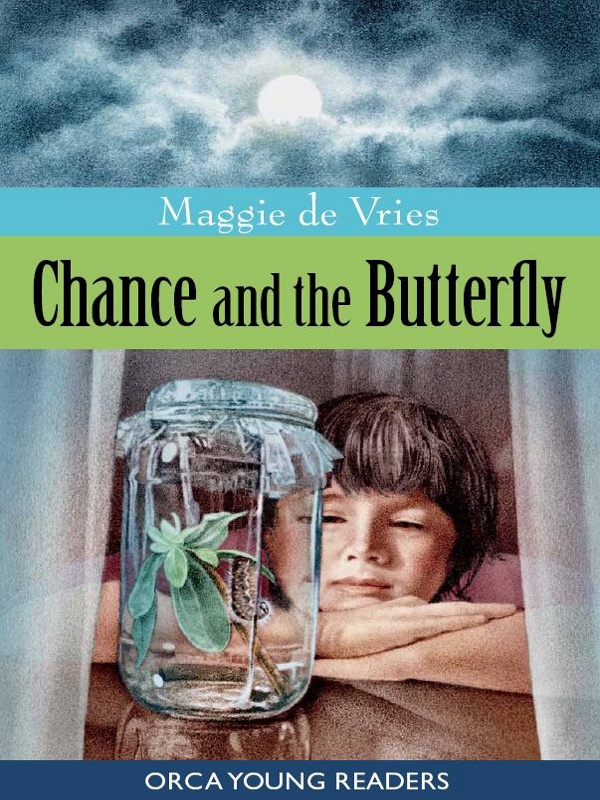 Chance
and the
Butterfly

Chance
and the
Butterfly

Summary
: Chance has problems fitting in at school and in his new foster home,
but watching a caterpillar become a butterfly helps him let go of some of his anger.

Orca Book Publishers is dedicated to preserving the environment and has printed this book on paper certified by the Forest Stewardship Council.

For my niece Jeanie, who loved this book even before it was done; for my nephew Ben, who loves creatures of all kinds; and in memory of their mother, my sister Sarah, who loved us all.

He jumped off the couch, scattering papers and books and sending to ruin the Lego tower he had started the night before. No time to stop. Mark would be mad when he found his schoolbooks on the floor, but at least the tower belonged to Chance. His to build. His to smash.

Hair uncombed, shoelaces dragging, Chance flew to the door and flung it open.

“Yes, Chance, I'm right with you,” said his foster father, Doug. He gathered up Chance's lunch bag and backpack and followed him out the door.

Then they had to wait in the car for Markâ¦just as they had waited every morning since Chance had come to stay here, three weeks ago.

“I don't see why we always have to go so early, Dad,” Mark groaned as he finally swung into the front seat. He ignored his younger foster brother, just as he had on the last fifteen school-day mornings. Chance knew, though, that Mark would not forget those books on the floor.

Was it so terrible that Mark ignored him? He had stayed in houses with other kids before, not foster kids, kids who belonged there, like Mark did. And they had ignored him before. And done much worse. Eggs, larvae, chrysalides, butterflies.

Every traffic light was red on the route to school, and Doug insisted on driving just below the speed limit the whole way as usual. Then, when they got there, Chance couldn't go in anyway, because it was nowhere near quarter to nine.

Mark took off for the gravel field behind the school. The grade fours and fives always played soccer there before the bell.

Chance stood right by the entrance nearest his class for the whole time. Doug waited over by the bicycle stand, keeping an eye on him.

“The butterflies are coming,” Chance reported to any children who came near enough to hear him. But even the kids in his own class just shrugged their shoulders and moved on. Didn't they care? The kids in this school were no different from kids in any of the other schools.

But at least here he was going to be part of something. He had left one school two days after the chicken eggs had been placed under the warm hatching lights. He had arrived at another two weeks after a brood of ducklings had been taken to a nearby farm. Here, for the first time, his timing was perfect. On Chance's first day in Ms. Samson's class, they had just been starting to learn all about the life cycle of painted lady butterflies. This time he was going to see it through.

Now, as Chance waited for the bell, a boy from his class, Ralph, tried to budge in front of him. Chance elbowed him in the stomach. Ralph grunted but did not take action. He wandered off, holding his belly. Would he tell? Chance wondered briefly. Another lunch at the office? Another talk with the principal?

Only three weeks, and already Chance knew every bit of Mrs. Laurence's office and every one of her tactics for dealing with unruly children.

“The butterflies are coming,” he muttered one more time under his breath.

For the second time that morning, he flung open a door. For the first time ever, he beat everyone else into the classroom. Not even Ms. Samson was there yet. As the others spilled into the room behind him, Chance searched. He was quiet now, wanting to make the discovery himself.

Nothing in the room was different, except for a square cardboard box sitting on the round table. It had red and white labels on the sides. Chance could make out the word
live
, but none of the others. The box had been opened and the top tucked closed again.

Still no sign of the teacher. It was easy to pull the box open and reach inside among the foam chips. He had a heavy container in his hand and was peering through its clear plastic sides at some muddy greenish substance when he was interrupted.

“Chance, what are you doing? Put that down!” The voice sliced across the room, not too loud, but clear as clear.

Chance rarely listened to teachers' angry voices. In fact, most of the time he didn't even hear them until it was far too late. But something in Ms. Samson's voice today reached him. He set the container back in the box and stepped back from the table.

Ms. Samson crossed the room quickly, put her hand gently on Chance's shoulder and steered him toward the cloakroom to put away his bags and his coat. Then she lifted the box and headed for the story corner.

“Get your things put away and join me on the carpet, boys and girls,” she said. “I have something exciting to share with you.”