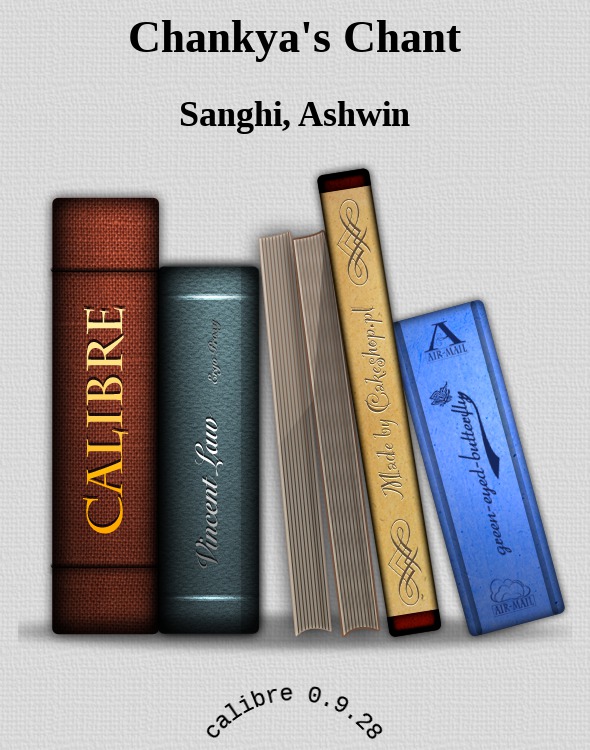 Ashwin Sanghi’s first novel, The
Rozabal Line
was
originally published in 2007 under his pseudonym,
Shawn Haigins. The book was subsequently published
in 2008 and 2010 in India under his own name and
went on to become a national bestseller.

An entrepreneur by profession, Ashwin writes
in his spare time, but writing historical fiction in the
thriller genre is his passion and hobby.
Chanakya’s
Chant
is his second novel in the genre.

Sanghi was educated at Cathedral & John Connon
School, Mumbai, and St Xavier’s College, Mumbai.
He holds a master’s degree from Yale and is working
towards a PhD in Creative Writing.

He lives in India with his wife, Anushika,
and son, Raghuvir.

Ashwin can be reached either via his blog at
www.ashwinsanghi.com
, via Twitter at
www.twitter.com/ashwinsanghi
, or via Facebook at
www.facebook.com/shawnhaigins
.

At the heart of this novel lies a chant—a Shakti mantra that appears several times within this story. The young and incredibly talented music composer Ameya Naik has set this chant to hypnotic and reverberating music reminiscent of ancient times. Surprisingly, it dramatically transitions into rock fusion towards the end.

The chant has been recited in Vedic tradition by the enthusiastic Kushal Gopalka and choir. The four-minute track is divided into two segments, ancient and modern, in keeping with the theme of this novel, which also alternates between the past and the present.

The track is available as a free mp3 download for everyone to hear. You may download it at:

The YouTube video trailer of this novel is also available for viewing at the above web link.

We hope that you enjoy listening to this mantra as much as all of us enjoyed composing and performing it. It brought to mind the truth in the view that the journey is the destination.

This is a work of fiction. Names, characters, places and incidents either are theproduct of the author’s imagination or are used fictitiously, and any resemblance toany actual persons, living or dead, events or locales, is entirely coincidental.

This book is sold subject to the condition that it shall not by way of trade or otherwise, be lent, resold, hired out, circulated, and no reproduction in any form, in whole or in part (except for brief quotations in critical articles or reviews) may be made without written permission of the publishers.

I am indebted to Aparna Gupta who first suggested a novel on Chanakya to me. The embryo of the idea planted by her eventually evolved into this novel.

I am obliged to my wife and son who ungrudgingly tolerated my persistent absence from their lives while I was writing this book and juggling the rest of my life.

I am beholden to my family, which supported me in my endeavours—including my writing.

I am thankful to various authors and producers of original or derived works. A separate acknowledgements section at the end of the narrative lists these in detail.

I am grateful to my editor, Prita Maitra, and my publisher, Gautam Padmanabhan, without whom none of my novels—including this one—would have seen the light of day.

I am delighted to have worked along with two very talented individuals, Kushal Gopalka and Ameya Naik. We could not have created the incredibly haunting audio track of
Chanakya’s Chant
without their labour and inspiration.

T
he old man sat propped up in his hospital bed. Monitors beeped numbers and flashed graphs, measuring his vital signs. His frail arms had been punctured with an endless number of needles and a tube ran through his mouth into his lungs. He knew that life was ebbing from his body but had prayed to Shakti to allow him to live long enough to savour the moment he had been waiting for.

The room was dark, blackout curtains having been drawn to block out the sunlight, except for the psychedelic illumination produced by the moving images on television. The duty nurse sat on a chair beside his steel bed, dozing off intermittently. Light from the television sparkled in the octogenarian’s eyes as he watched the eighteenth prime minister of India take the oath of office.

The incessant buzzing of his three mobile phones brought his personal assistant, Menon, scurrying in. The patient in the adjoining room was complaining that the relentless ringing was disturbing him. The fifty-something secretary peeped into the room to see his employer lying on the utilitarian bed, his gaze transfixed on the images flashed from New Delhi. He was oblivious to the cacophony of phones. He had waited thirty long years for this moment and was not about to let it be obstructed by phone calls. In any case, he couldn’t talk with the damn tube in his mouth. Menon had suggested that the phones be turned off but he had refused. I’m not ready to allow anything—including my own life— to be switched off before I’ve relished this moment, he thought to himself.

The hospital in Kanpur was not equipped to deal with his condition. Pandit Gangasagar Mishra couldn’t care less. He refused to bloody die in a hospital bed in New Delhi or Mumbai. Kanpur was home and he would go meet his maker from his own abode and on his own terms.

He watched the scene unfolding at Rashtrapati Bhavan. The President was administering the oath of office to the charismatic woman. She was dressed in her usual off-white cotton saree, trimmed with a pale gold border, and wore no jewellery except for a pair of simple solitaire diamond earrings. She quite obviously had the text of the oath before her on a single sheet of paper but did not seem to need it. It was almost as if she had spent her entire life preparing for the occasion. With a crisp Oxonian accent she was saying, ‘I, Chandini Gupta, do swear in the name of God that I will bear true faith and allegiance to the Constitution of India as by law established, that I will uphold the sovereignty and integrity of India, that I will faithfully and conscientiously discharge my duties as prime minister and that I will do right to all manner of people in accordance with the Constitution and the law without fear or favour, affection or ill will.’ The doyen smiled. Without fear, favour, affection or ill will! Bollocks! It was not possible to be prime minister without any of these, and she bloody knew it. It was only his opinion, though. But then, the wily Machiavelli had always believed that any clod could have the facts—having an opinion was an art.

He chuckled and the result was a rasping cough, a reminder of his mortality, and the cancer that plagued his lungs. The secret service detail standing outside his room heard him cough. They wondered whom they were protecting him from. Indeed there were many who wanted the bastard dead but it seemed that God had other plans. It was almost like Gangasagar was cocking a snook at his enemies and telling them ‘Come and fucking get me, but I won’t be around!’

A thin film of perspiration coated his head, the baldness of which was accentuated by two tufts of shocking white hair on either side. The nurse dabbed at it with a towel. He followed her movements with his deep, penetrating, all-seeing eyes—little video cameras that had seen and stored away the very worst of human behaviour in the gigabytes of his brain’s hard disk. His thin lips quivered as he gasped for breath, his hooked nose struggling to suck in life-giving oxygen in spite of the tube. His skin had a pale translucent hue, like a rare parchment in a museum, and his thin frame occupied very little of the bed. How could this diminutive little man be so powerful?

In the lobby outside his room stood a posse of political associates. Pandit Gangasagar Mishra had no friends. In his world of politics there were only enemies. A clutch of newspaper hounds hobnobbed with the politicians outside hoping to get the inside scoop on Mishra’s death before his death.

The old man seemed to be mumbling something, a laboured effort to get the words out. It was his daily prayer in Sanskrit. It said, ‘
Primal Shakti, I bow to thee; all-encompassing Shakti, I bow to thee; that through which God creates, I bow to thee; creative power of the Kundalini; mother of all, to thee I bow.
’ He looked at his protégé— now sworn in as PM—fold her hands together in a humble gesture of acknowledgement to the television cameras... and then stumble backwards. The red stain that spread on her left shoulder—almost in slow motion —had been fired from a Stinger .22 Magnum.