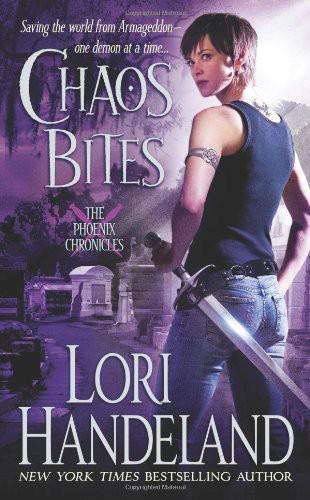 Praise for
The Phoenix Chronicles by Lori Handeland

“A striking series . . . with a decidedly sexy edge. Readers again view the world through the eyes of excop–turned-humanity’s-savior Liz Phoenix [in] this complex mythology.”

“We really enjoyed it . . . and are looking forward to [more] in this series.”

“Handeland does an amazing job of packing so much punch into the pages of this story without ever leaving the reader behind.
Doomsday Can Wait
ups the paranormal and emotional content of the series, adding strength to the heroine and a more human touch to one of her closest allies. This is an action-packed series that urban fantasy readers should thoroughly enjoy, and I’m looking forward to seeing where the author takes us next.”

“Handeland pens another tale that captured my heart . . . with captivating characters [and] an absorbing plot that will keep readers on the edge of their seats.”

“Fascinating. A fast-paced thriller that will have readers looking for book two.”

“Handeland is back with a striking new series, narrated by a heroine thrown headfirst into a fairly apocalyptic scenario . . . With sex and power intertwined, Hande-land looks to have another winner of a series on her hands!”

No Rest for the Witches

Being the leader of the supernatural forces of good isn’t as cool as it sounds. For one thing, I had to put the world first. So everything else was second, third, four hundred and fifty-ninth. And we’re talking important things like love, friendship, family. Which is how I ended up killing the man I loved.

Yes, I’m in love with two different guys. It was news to me, too. Add to that the beginning of the end of the world and you’ve got chaos. As anyone who’s ever experienced it can tell you—chaos bites.

Since the night my foster mother died in my arms, leaving me in charge of the Apocalypse, chaos had been, for me, standard operating procedure.

Several weeks after I’d killed him, Sawyer invaded my dreams. He was a Navajo skinwalker—both witch and shape-shifter, a sorcerer of incredible power. Unfortunately his power hadn’t kept him from dying. Considering that he’d wanted to, I doubted anything could have. I still felt guilty. Tearing out a guy’s heart with your bare hand can do that.

The dream was a sex dream. With Sawyer they usually were. He was a catalyst telepath—he brought out the supernatural abilities of others through sex. Something about opening yourself to yourself, the universe, the magical possibilities within—yada-yada, blah, blah, blah.

I’d never understood what Sawyer did or how. Not that it didn’t work. One night with him and I’d had more power than I knew what to do with.

In my dream I lay on my bed, in my apartment in Friedenberg, a northern suburb of Milwaukee. Sawyer lay behind me. His hand cupped my hip; he spooned himself around my body. Since we were nearly the same height his breath brushed my neck, his hair—long and black and sleek—cascaded over my skin. I covered his hand with mine and began to turn.

Our legs tangled; his tightened, along with those fingers at my hip. “Don’t,” he ordered, his voice forever deep and commanding.

He nipped lightly at the curve of my neck, and I gasped—both surprise and arousal. I knew this was a dream, but apparently my body did not.

With hard muscles rippling beneath smooth, hot skin, he felt so real. Living for centuries had given Sawyer plenty of time to work on every muscle group for several decades, honing each inch to a state designed to make women drool. He’d be perfect if not for the tattoos that wound all over him.

To shift, most skinwalkers used a robe adorned with the likeness of their spirit animal. For Sawyer, his skin was his robe, and upon it he’d inscribed the likenesses of many beasts of prey. Sometimes, in the firelight, those tattoos seemed to dance.

“Why do you think?” He arched, pressing his erection against me. I couldn’t help it—I arched, too. Sure, it had only been a few weeks, but I missed him. I was going to miss him for the rest of my life.

Without Sawyer the forces of good—aka the federation—were in deep shit. Certainly I was powerful, and would no doubt get even more so, but I’d been thrown into this without any training. I was like a magical bull in a very full china shop, thrashing around breaking things, breaking people. So far I’d been able to keep those who followed me from getting completely wiped out, but only because I’d had help.

“It’s a long trip from hell for a booty call,” I murmured.

His tongue tickled my neck in the same place he’d so recently nipped. “I’m not in hell.”

He slid his hand from my hip to my breast. “Where does it feel like I am?” He rubbed a thumb over my nipple, and the sensation made me tingle all over.

Sawyer didn’t speak, just kept sliding his thumb over and back, over and back, then he sighed and stopped. I bit my lip to keep myself from begging him to start again.

His lithe, clever fingers brushed across the chain that hung from my neck, then captured the turquoise strung onto it. “You’re wearing this now?”

Sawyer had given me the necklace years ago. I’d taken it off only recently. When he’d died, I’d put the turquoise back on. It was all I had left of him.

“I—” I paused, uncertain what to say. I didn’t want him to know how badly I missed him. How I rubbed the smooth stone at least a dozen times a day and remembered.

At first I’d believed the necklace was just jewelry. It had turned out to be magic, marking me as Sawyer’s, saving my life on occasion, and allowing him to know where I was whenever he wanted to.

He let the turquoise fall back between my breasts. “What was the last thing I said to you?”

I stiffened so fast I conked the back of my head against his nose. The resultant
thunk
and his hiss sounded pretty real to me, as did the dull throbbing in my skull that followed.

“Phoenix,” Sawyer snapped. “What was the—”

“Protect that gift of faith,” I repeated.

He ran his palm over my shoulder. “Yes.”

I closed my eyes, drew in a deep breath. Right before he’d said those words, Sawyer had said a few others. Words that had kept me up nights almost as much as his death had.

I chose to leave a child behind
.

I blocked out the horrible images of what had come after those statements with what had come not long before. He’d crept into the room where I was chained to a bed, a prisoner of my own mother, a woman I’d thought long dead. She’d been a winner. Five minutes in her company and I no longer regretted being an orphan.

The situation had been dire, yet he’d seduced me. I hadn’t wondered why until he was gone. My hand moved to my still-flat stomach. Had he left a child behind in me?

“Sawyer,” I began. I had so many questions. I didn’t get to ask any of them.

Most people called me Liz, but Sawyer never had.