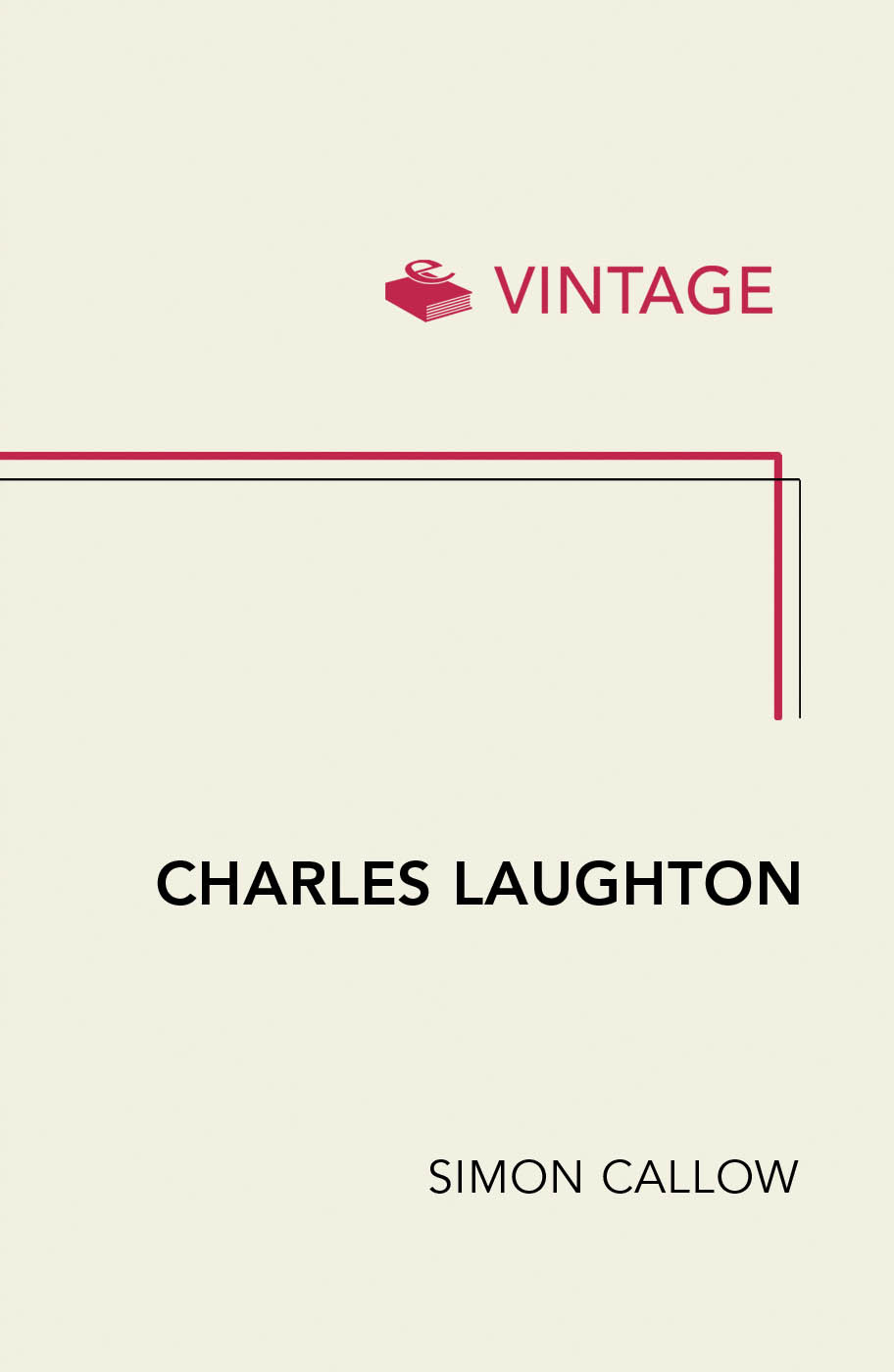 Life with a Capital ‘L’

The creator of the Hunchback of Notre Dame, Henry VIII and Captain Bligh, Charles Laughton’s career spans 50 films and 40 stage roles. This entralling biography follows him from his parents’ hotel in Scarborough to his climactic assumption of the role of King Lear in Statford at the end of his life. Along the way we meet a galaxy of Hollywood greats – from Korda, Hitchcock and Billy WIlder to Gregory Peck, Robert Mitchum and Marilyn Monroe. We also discover a hugely talented and complex man – a legend in his own lifetime who nonetheless counted himself a failure.

Simon Callow is an actor, director and writer. He has appeared on the stage and in many films, including the hugely popular
Four Weddings and a Funeral
. His books include
Being an Actor, Shooting the Actor, Love is Where it Falls
, the first two volumes of his three-volume life of Orson Welles, his theatrical memoir
My Life in Pieces
, and, most recently, the highly acclaimed
Charles Dickens and the Great Theatre of the World
.

Love is Where it Falls

Orson Welles: The Road to Xanadu

My Life in Pieces

Charles Dickens and the Great Theatre of the World

1
. An advertisement for the Pavilion Hotel, Scarborough, during the Laughtons’ tenure.

2
. Laughton in November 1928 at the time of
Pickwick
. (BBC Hulton Picture Library)

5
.
On the Spot
by Edgar Wallace, 1931, with Laughton and Gillian Lind. (Photo of Laughton: BBC Hulton Picture Library)

6
. Charles, Elsa and Mr J. C. Graham, European head of Paramount, at a luncheon to launch
The Sign of the Cross
, January 1933. (BBC Hulton Picture Library)

10
.
The Importance of Being Earnest
, Old Vic, 1934, with Laughton as Chasuble and Lanchester as Miss Prism.

11
. ‘Laughton bestrides the Atlantic’, a fantasy by Sherriffs from the
Sketch
of 20 February 1935, showing Laughton with puppets of his most famous roles to date: (l. to r.) Nero; Henry VIII; the Murderer in
Payment Deferred
; and Moulton-Barrett in
The Barretts of Wimpole Street
.

19
. A hand-made collage by Bertolt Brecht serving as the front cover of a collection of poems he gave to Charles for Christmas 1945 or 1946. The inscription in Brecht’s hand reads: ‘Playwright Brecht Humbly Submits Some of His Subversive Thoughts to the Most Honorable Laughton.’ (Photo: James K. Lyon)

His love of film, and my love of him

made the book possible

Of the body friend and guest,

Where now must you look for rest,

Pale and naked, hard as death,

Lost without your power to jest?

The starting point of this book was my realisation that I was not, after all, Charles Laughton. This useful discovery was made during the extremely brief run of
On the Spot
, in which I was involved some summers ago in London, and it led me to ask who he was and what was the nature of his talent. Two years of research revealed to me much more than I had bargained for, a giant and a hero of acting, who had pushed it further and deeper than any actor of our century. His relation to acting was complex and led him to withdraw from it into other, less all-consuming means of expression. I tried to follow him there too.

Charles Laughton was a ‘difficult’ actor, not only because he was not easy to work with, but also in the sense that some books, some paintings, are said to be ‘difficult’: they require close attention, they are not what, at first sight, they may appear to be. This book is a sustained attempt to write about acting, as exemplified by one of its greatest practitioners. It is an enquiry into what he was trying to do and how far he succeeded in doing it. It tries to discover what kind of an artist he was. It considers the question of whether it is possible to talk about acting as an art at all. His life was in many ways extraordinary, but the body of the book is concerned with it only in relation to his acting. The central account of his output, his oeuvre, is flanked on either side by chapters which attempt respectively to show something of where he and his acting came from (‘Origins’) and to understand his emotional life (‘Coda’).

In between is a saga of the heroic struggle of a great artist to transcend the complexities of his temperament and accomplish the enormous tasks he set himself.

It is twenty-five years since I wrote this book. There have been no subsequent biographies of Laughton. Indeed, I’m sad to say that Laughton – as an actor, at any rate – has increasingly slipped out of public consciousness. And not only that: even within his own profession, he is virtually unknown to anyone under the age of forty. A few years ago while I was working at the Royal Shakespeare Company I took an informal straw poll of my fellow actors: mention of his name to anyone not yet middle-aged drew a complete blank. This is tragic, in my view. We actors need our heroes, our models; we need to know what has been achieved – what can be achieved. And Laughton was one of the handful of actors in the last century – among them Mikhail Chekov, Nikolai Cherkasov, Greta Garbo, Louis Jouvet, Marlon Brando – who extended the possibilities of acting, expanding its vocabulary and reaching new heights of expressiveness. He was a great original, but he was not a one-off, like Katharine Hepburn, or Michael Caine, whom it is possible to imitate, but from whom it is not possible to learn. His approach to acting, and his ambition for it, remain a constant inspiration. He was that rare thing, the actor as artist. This idea was the theme of my book.

It was my first biography. As the author of a biography of Orson Welles which is – I hope I may say without appearing to blow my own trumpet – a genuine work of scholarship, I would now prefer to describe
Charles Laughton: A Difficult Actor
as a biographical study, like my books about Oscar Wilde and Charles Dickens. It was Laughton’s acting, as I explain in the Introduction, that I was
interested
in, and I concerned myself with the life only insofar as it illuminated the acting. I wrote it for the best of all possible motives for writing a book: because there was nothing in existence that could tell me what I wanted to know about Laughton’s acting, how he worked, how he thought. Elsa Lanchester’s early biography of him, while not without charm, was whimsical in tone and, because she could not be honest about the complexities of being married to a homosexual husband, inclined to glide over the surface. Her autobiography –
Elsa Lanchester Herself
– was written after Laughton’s death and was essentially concerned with their personal relationship, enabling her to settle many scores and repay many ancient grudges. The next book about Laughton to appear was Charles Higham’s biography, written at the prompting of Lanchester, who was intent on further revenging herself on her late husband; Higham later told me hair-raising stories about how she had set private detectives onto Laughton as he pursued his sex life, and expected the biographer to print the photographs they had taken of him with – often quite literally – his pants down. The only other biography, by Kurt Singer, a Hollywood press rep, was a wretched piece of hackwork, cobbled together from newspaper cuttings and, worse, press releases.

None of them had anything to say about his acting. This, of course, was and is generally true of actors’ biographies. In a sense, in writing about Laughton, I was on a mission; it was part of an ongoing project to find a way of writing about acting. My first book,
Being an Actor
, was about the actor as Everyman, and attempted to delineate the common experience of actors by looking at the professional experience of one average young actor – me. In
Charles Laughton: A Difficult Actor
, by contrast, I set out to look at the work of a genius of acting, to see what heights might be scaled and what the conditions were for that sort of greatness. I took issue with actors’ biographies that concerned themselves only with their subjects’ careers or with the occupants of their beds. I read them, of course, and not necessarily without pleasure. My objection to them was simply that they contributed nothing to an
understanding
of acting as either craft or art. The best book I know about any actor as an artist is Parker Tyler’s
Chaplin: Last of the Clowns
, and I tried to model myself on him, hoping to emulate something of his searching analysis and his hyper-sensitive openness to the resonances in his subject’s work. (I would like to have imitated his deliciously fancy-pants prose, too, but wisely refrained). Another influence was Robin Lane Fox’s
Alexander the Great
, which eschews any attempt at novelish continuity or authorial omniscience, instead constantly stopping the flow to ask: what does such and such a bare fact mean? What is its context? In doing so, Fox opens doors on history which no seamless narrative could hope for.

The Mistletoe Experiment by Serena Yates
As The Crow Flies (The DI Nick Dixon Crime Series) by Boyd, Damien
The Everlasting Hatred by Hal Lindsey
Star Wars - When the Domino Falls by Patricia A. Jackson
The Roving Party by Rohan Wilson
What Wendy Wants by Sex, Nikki
Frozen Stiff by Sherry Shahan
The Dragon of Time: Gods and Dragons by Aaron Dennis
Promised to a Sheik by Carla Cassidy
Angel by Kelli Maine