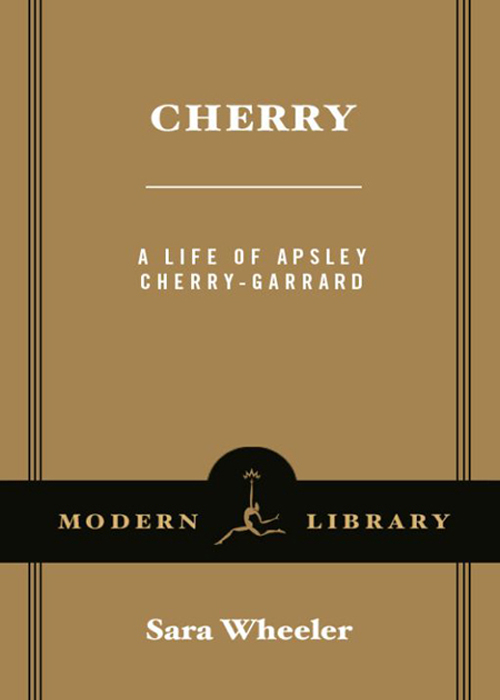 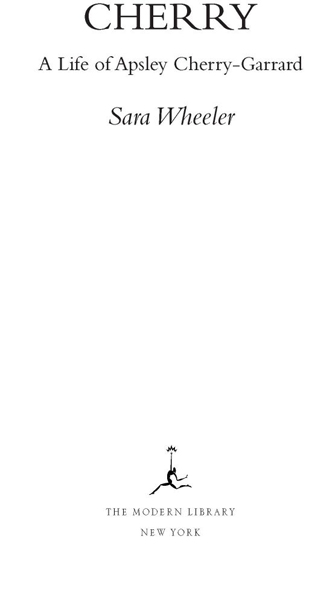 10 - The Most Wonderful Story in the World

11 - The Chaos which Threatens

To Angela Mathias and Hugh Turner, with affection

“One of the most haunting adventure tales of all time. . . . Wheeler’s retelling of [this] famous ordeal is psychologically astute and deeply felt.”

“[An] extraordinarily fine biography. . . . This is so much the stuff of great biography that it comes as somewhat of a surprise that it had not been undertaken before now. But perhaps Cherry was only waiting for an ideal biographer to discover him.”

“Beautifully written and deeply felt . . . Wheeler has perfect pitch for this material. . . . She has produced a fully realized portrait of one of the 20th century’s great tragic heroes.”

—
The Globe and Mail
(Toronto)

“Beautiful . . . written with unfailing eloquence and grace, and great admiration for its subject.”

“Wheeler accomplishes what only the best biographies can. Drawing on her own experience in the Antarctic, she is able to satisfy the reader’s curiosity of how it must have felt to be on that doomed expedition.”

“A lively biography of the adventurer-author. . . . Keeps Cherry-Garrard’s story humming along, novel-like, from his lord-of-the-manor childhood to his friendship with neighbor George Bernard Shaw.”

“This is Wheeler’s first biography and it is a wonderful match of author to subject. . . . She brilliantly communicates the icy spell that holds her, and held Cherry, in its frozen grip.”

“This is a supple, chewy book, juggling many features. Vulnerability, ambition, foolishness. It’s nuanced, bold, and three-dimensional. Ice-worthy. I pored over and argued with it, and when I finished, felt replete.”

“At last, in Sara Wheeler’s compelling biography, the author of the finest polar narrative ever written emerges from the shadow of his masterpiece.
Cherry
casts a fascinating new light on Scott’s last expedition, the bravest and most tragic journey in the annals of Antarctica.”

“Wheeler’s incisive skill in describing the majesty and misery of polar exploration reawakened the tingling of frostbite in my fingers as I turned the pages. This is the closest an armchair explorer can get to experiencing the South Pole in safety.”

“It is clear that Sara Wheeler loves her subject, and her biography brilliantly succeeds not only in bringing this modest man disarmingly to life but also in re-creating the England of his time. . . . A formidable accomplishment.”

Some years ago, marooned in a small tent close to one of the dynamic ice streams on the west Antarctic ice sheet, I finished reading The Worst Journey in the World as a blizzard closed in around our tiny camp. Over the next days I lay in a lonely whiteout and thought about the man who wrote it. I admired his elegant scepticism, the bitter brilliance of his prose and the nimble sleight of hand with which he had transformed his story into a parable. Between the graceful lines I saw, dimly, a vision of a certain kind of Englishness: quizzical detachment, a finely tuned sense of irony, an infinite capacity for gloom tempered with elegiac melancholy. Or that is what I thought I saw.

The story of Captain Scott’s doomed expedition to the South Pole, and of Titus Oates’ luminous exit from the tent, had been repeated many times. But Cherry-Garrard’s story had never been told: there was no biography. It didn’t seem right that the author of such a dazzling work should remain a mute and shadowy figure. His book was not the disembodied account of an expedition: it was an intimate reflection of the man behind the authorial mask. I wanted a glimpse of that man.

The journey from that far-off day in the tent has been long and challenging. I had never tackled a biography before. As the months progressed, and then the years, I had to learn to explore the past in the way I had previously explored places. Some parts of Cherry’s life were hard to get to, and involved a lot of rough terrain. The amount of material I uncovered varied immensely: a glut of primary material for the Antarctic period; a drought for great stretches of time. For many months I heard little but the sound of trees crashing across my path. Then a cache of letters would turn up, unread since some long-ago recipient folded them back into their flimsy envelopes. A small thing sometimes casts a long light.

Cherry was born in an age as remote as the South Pole: horse-drawn hansom cabs, tribes of indoor servants, a squirearchy sitting comfy in their rural seats, Gladstone and Salisbury battling it out. Yet he died only two years before I was born, when Harold Macmillan was in Downing Street and John Osborne had already written
Look Back in Anger
. He lived to see Sputnik, but his father was born in the reign of William IV. His was a period of huge, unstoppable change. Indeed, so much happened in his seventy-three years that I occasionally wondered in exasperation if anything could possibly have taken place in the world before 1886.

Much has been written about the Edwardian summer that bloomed before the Great War, and about the irreversible changes that war brought to Britain. But for Cherry it was the Antarctic that changed everything. After an upbringing of late-Victorian privilege and a conventional, trussed-up progression through prep school, Winchester and Oxford, he sailed down to the Antarctic at the age of twenty-four. He was away from 1910 to 1913: a crucial period of British history. He came back to a different country. But he was different, too. Like most of the Antarctic veterans he went off to Flanders soon after, but it was his experience in the south that shaped his ideas and determined his private mythology. It lay like a bright, shining band between his youth and the rest of his life.

Meanwhile the legend of Scott quickly hardened. It symbolised a vanished age: one in which Englishmen oiled the engines of imperialism with confidence and quasi-religious zeal. Scott came to embody a set of old-fashioned ideals, especially after the war had given those ideals a good pummelling. He became a kind of Arthurian hero, a mystical Galahad of the snows. As inspirational fuel he was tapped for decades: even after the Second World War crocodiles of schoolboys were marched into cinemas to watch John Mills staggering through fake snow at Ealing Studios. In our own less heroic age the expedition has begun to emerge from the penumbra of proprieties that shrouded public events in those distant days. But its chief chronicler has been left to languish in the historical gloom.

Like many of his peers, before he reached middle age Cherry felt that he had witnessed the collapse of a world that had been ordered and codified by a familiar set of shared values (‘God in his Heaven,’ as his contemporary Siegfried Sassoon put it, ‘and sausages for breakfast.’) He had seen the certainties of his youth crumble, and acknowledged bleakly that the world ‘was losing its ancient faiths without having much to put in their place’. Soon he was convinced that moral rot had set in, and the conviction relentlessly stoked his personal vision of Spenglerian decline. But through his work, and by dint of his creative impulse, he tried to redeem his losses. I admired that.

It did not save him. Cherry was not a conventional man, and he had never fitted in, even before the great social changes that so vexed him. He was uncomfortable in his father’s shoes as head of several large estates, and he had left his own religious faith behind in the nursery. He spent part of his adult life lost in some terrible personal chaos that was infinitely more catastrophic than the upheavals he observed sweeping through middle England. Everyone who has written about Cherry has focused on his periods of debilitating depression, as if those episodes condemned him. I found myself admiring him for not going under. This, surely, was an example of what the human spirit can achieve. Anxiety was one of Cherry’s defining characteristics: what could be more human?

He was a mass of contradictions, like most of us, and I have struggled not to gratify the biographer’s need to impose coherence. The truth is more complicated than it seems in any biography. I was most interested in Cherry’s inner life: the place where the documents stop. A biographer’s task is to disengage the essence of a person from the interminable clutter of gas bills and dentist’s appointments.

As for the documents: there are almost no published sources. Cherry’s Garrard ancestors left boxes of lifeless material which are open to researchers at the Hertfordshire county archives. The family solicitors also recently deposited several boxes of legal documents there, as well as at the Berkshire Record Office. It was interesting material, though largely unusable. Cherry’s Antarctic archive, including his journal, resides at the Scott Polar Research Institute in Cambridge, home of much of the unpublished material on the 1910–13 expedition. Most of Scott’s officers and some of his seamen left diaries, and their accounts form a rich and sometimes dissonant fugue in many voices. For the later years of Cherry’s life I was dependent on the memory, testimony and diaries of his widow Angela Mathias, who has co-operated with this biography far beyond the call of duty. Fragments popped up in other places. But many gaps stubbornly refused to close, and there is a great deal I don’t know.

As I moved among the material that does exist, sifting and shaping and selecting the fertile fact, I was not an impartial reporter. All biographers mirror at some unfathomable level their own preoccupations and those of their age. But I hope I have kept myself on the sidelines. I am sure that Cherry will not be imprisoned in this first biography. Others will come and lay their pictures over mine, and other Cherrys will emerge. Biography has no end.

Immersion in his life was a happy experience; I found his company invigorating, most of the time. When he seemed remote I tried to remember that he knew something of loss and failure and sadness; and so did I. It brought him near. Cherry’s story, I always believed, was worth telling. I wanted the man who wrote
The Worst Journey
to stand up for a moment. From the start I realised that a glimpse was the most I could hope for; now, at the end, I am even more convinced of the fundamental, immutable isolation of one human being from another. Whom do we really know? But seeing through a glass darkly is still seeing, and the effort brings its own reward, as Cherry might have said. I was encouraged by his own bold approach to biographical writing. Lytton Strachey published
Eminent Victorians
while he was working on
The Worst Journey
, so the idea that biography was more about conjuring flesh and blood than accumulating documents was quite new. Yet alone of the men who produced accounts of the expedition, Cherry insisted on portraying Scott in shades of dark and light.

Towards the end of his life Cherry tried to sum up what he had done in
The Worst Journey
, and why he had done it. ‘To me, and perhaps to you, the interest in this story is the men, and it is the spirit of the men, “the response of the spirit”, which is interesting rather than what they did or failed to do: except in a superficial sense they never failed.’ Nor did he, except in that superficial sense. His words about his book describe his life just as well: ‘It is a story about human minds with all kinds of ideas and questions involved, which stretch beyond the furthest horizons.’