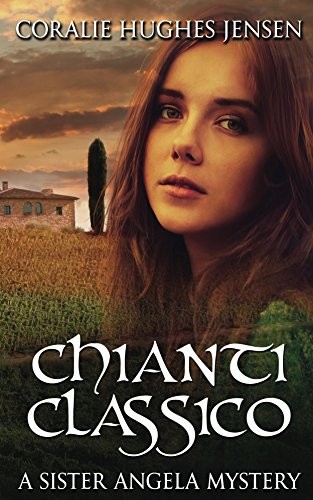 This is a work of fiction. Names, characters, places, and incidents are drawn from the author’s imagination or used fictitiously and are not to be construed as real. Any resemblance to actual events, locales, organizations, or persons, living or dead, is entirely coincidental.

No part of this book may be used or reproduced in any manner whatsoever without the written permission of the copyright owner, except in the case of brief quotations embodied in critical articles and reviews.

who inspired me to become a writer

Thank you to my editor, Bruce. To our dear friend,
Cinzia and Giorgio
, owners of
La Chiusa dei Monaci
Bed and Breakfast in Arrezzo, who helped me find the places we needed to see in the Apennines. To the members of the Rhode Island Romance Group who helped me to go independent and to New England Sisters in Crime who kindle my interest in mysteries.

The soft footsteps that ascended the wooden staircase could be heard if one of the pillowed heads strained an ear. But would someone have questioned or even noticed? The centuries-old building was never without noise of some kind, and eyes usually followed the children wherever they went, even in sleep.

The soft warm air in her ear roused her. Pia didn’t startle because that was often how the others awakened her for breakfast. The rough hand stroked her face and urged her to sit up.

A whisper floated on the air like a melody. “Come, we must go. Someone’s waiting for you.”

Too tired to question her, Pia slipped into the jacket the nun held for her, and taking the old woman’s hand, the two crept down the stairs and ambled out through a door into the damp night air.

Darkness faded with the chirping of birds and the smell of fresh-baked bread. Sister Carmela bellowed from the bottom of the stairs at the young girls just beginning to rise. Through the small window at the end of the room, sunlight streaked the floorboards.

Allegra pushed the hair from her face. “We’re up, Sister,” she said.

A head popped up over the top step. “Terza, I don’t see you. You must still be under the covers. Sister Edita made fresh rolls with strawberries this morning. The other girls are trying to stuff themselves already. You’ll be too late. Where’s Pia?”

“She must be in the toilet downstairs,” said Allegra. “I haven’t seen her.”

“I don’t think so. Grazia was in there. Pia? Are you here? Check under the bed, Allegra.” Sister Carmela’s voice rose as she barked instructions. “Did anyone see her leave? How long has she been gone?”

Terza shrugged her shoulders. “Maybe the nun took her.”

“One of the nuns came up here last night. I really didn’t notice who. She just checked on us, I guess.”

“Did anyone else see a nun?”

Cammeo sat on the edge of her bed, dangling her feet. “I saw a ghostly old woman come up here.”

“You dreamt about that hag again, Cammeo,” said Allegra. “You always tell us you see ghosts strolling around up here.”

“No. They float. This one was dark, and her hands were all shriveled. I figured it was the same ghost in a different outfit.”

“Why didn’t you scream?” asked Terza.

“Because you get mad when I wake you up. I rolled over and pretended I didn’t see her.”

“Did she take Pia?” asked Allegra.

Sister Carmela was already halfway down the stairs again and didn’t hear the last exchange. She had to get to the phone and call Mother Faustine. Something wasn’t right.

Sister Daniela entered the door at the back of the old stone building. She was late and concerned the nuns would be in a tizzy, worried about who was keeping the girls organized while they tried to change shifts. She placed her heavy briefcase on top of her desk in the large classroom and glanced at her watch. It was quiet—too quiet for the beginning of the school. She walked into the hallway and gazed toward the laundry door to her right. The door was still closed, presumably locked. No one had started washing the sheets or towels. She glanced to the left where the outside basement door still stood open. Had she failed to close it or had someone entered behind her? She peeked up the stairs to the main house. Where was everyone?

Sister Daniela was just a few treads up when she heard the heavy footsteps in the passage above. Her heart began to pump harder. Should she stay downstairs and hide? Was the orphanage being taken over by a marauding army? She took a deep breath and let it out. Then she continued up the stairs and opened the door.

Lined up along the walls of the passageway, at least twenty of the girls of all ages and sizes stood at attention. Sister Edita carried a ruler, daring them to move. When she heard the door close behind Sister Daniela, the cook turned to face her.

“Sister Carmela, and Sister Natalia, who just got here, are conducting a search.”

“Mother Faustine’s on her way,” said Terza. “Allegra and Evelina are going room by room.”

Sister Edita shot Terza a menacing gaze, but Terza ignored her. The tears began to track down the nun’s cheeks, making her threat ineffective. Instead, Terza walked forward and slid her small hand into the cook’s.

Sister Carmela descended the stairs and noticed the young nun. “The police have been called. Sister Daniela, please take the children downstairs to the classroom. I think that they’ll worry less if they’re kept busy. Sister Edita, please continue with your duties. In a few hours, lunch needs to be served in the dining room.”

Sister Daniela opened the basement door and motioned for everyone to enter. Sixteen-year-old Evelina was the last to approach the door. Sister Daniela stared into her gray eyes. “You and Allegra didn’t find anything upstairs?”

“No. We looked in every hiding place we’ve all used at one time or another. Nothing. I sleep in one of the rooms on the second floor. I heard nothing, but Allegra said that some of the girls in her room saw a nun come up. She believes they thought it was old Sister Octavia so they didn’t stop to consider that Sister Octavia would never be able to climb all those stairs.”

“Or stay up that late,” said Sister Daniela. “Maybe we can have the girls in that room draw us pictures of what they saw or dreamt about. Could you do that, Allegra? Could you take them aside and have them work on the project? Don’t forget to draw what you think you saw too. Everyone else can sketch pictures in the classroom with me. Perhaps they saw something through a window or on a trek to the toilet.”

“I think you would prefer being with the police, wouldn’t you?” asked Evelina. “Didn’t you mention that you and another nun did detective work when you we’re at the
scuola media
in Montriano?”

Sister Daniela smiled as she closed the door behind her. “Yes well, right now I can help more by taking care of my students. Hopefully we won’t lose anyone else.” Stopping at the bottom of the stairs, she shivered. Considering the damage she could do to possible evidence, she walked to the door leading outside and carefully latched it.

Sister Daniela kept her mind on the task at hand, even when the police began to remove her students one at a time to interview with them. She longed to ask questions herself, but didn’t dare. Instead, hoping they would draw a picture of the intruder who may have visited while they were supposedly asleep, Sister Daniela waved the most-likely witnesses to the back of the room. Maybe she should have had everyone involved in the lesson together. What if a child was finding her way to the toilet and seen someone in the hall? Perhaps the child didn’t remember what she observed, and another’s drawing suddenly sparked a memory? The teacher’s head spun.

When classes were over, she dismissed the students into Sister Carmela’s capable hands. Those assigned to preparing dinner would report to the kitchen while others studied and got extra help with assignments in the dining room upstairs.

Evelina approached Sister Daniela’s desk as soon as the students had left the room. “I watched to see if anyone examined the room at the end of the hall. No one even came down to inspect it.”

Sister Daniela kept writing. “I assume they checked down here this morning before I arrived.”

“But the police didn’t. They lined us up as soon as I came downstairs.”

“So what do you think we ought to do?”

“Yes. I assume we’re talking about the laundry room. Since the laundry was done yesterday, it’s been quiet. I usually pray for quiet while we study, but it did seem a bit eerie down here today.” Sister Daniela opened the desk drawer and retrieved her ring of keys. “Stand by the door after I open it. If you hear anyone descending the stairs, please warn me.”

Evelina followed the nun into the hallway and stopped in front of the door.

Sister Daniela slid the key into the lock and slowly turned it. The door squeaked when it opened. The nun stuck her fingers through the crack, fumbling with the switch. “The lights won’t come on,” she said, her voice husky with fear.

Evelina pushed open the door to let a swatch of light from the hallway cross the polished floor.

The two listened but heard no response.

Evelina suddenly disappeared and soon returned with a flashlight. She aimed it at each wall and then followed the contour of the floor.

“I don’t see anything amiss,” said the nun.

Evelina aimed the light toward a vent along the far wall. “That looks like someone’s fiddled with the grate, doesn’t it?”

They suddenly froze at the sound of a door slamming shut somewhere in the house. Was someone coming? Evelina fidgeted with the flashlight, trying to shut it off. The two women retreated to the hallway, and Sister Daniela quietly shut the door behind them. Sister Carmela appeared halfway down the stairs.

“There you are, Evelina. I thought you were going to help me. The homework seems to be hard for them.”

“Yes, I’ll be right there. I had a question about the assignment for Sister Daniela, and she came out here to explain it before I disappeared up the stairs.”

“Thank you for that, Sister. I certainly can’t explain it to them. I have no idea how to do that with numbers.” Sister Carmela started back up the stairs.

“No. I’ll make sure the police have searched the area around the vent. You run along to help everyone with homework. I have to get to my sister’s house and make her husband something to eat.