Read Chistmas Ever After Online 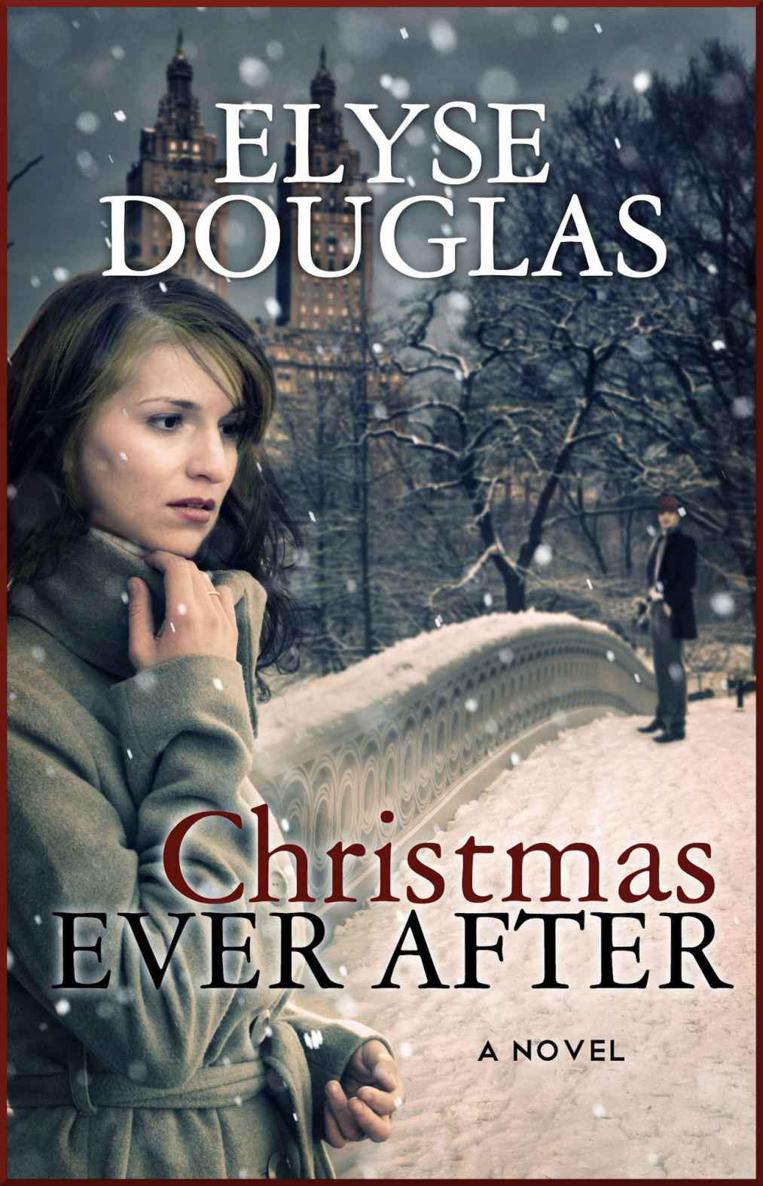 To Nickie and Bertie: a little present for Christmas.

This is a work of fiction. Names, characters, places and incidents are either the product of the author’s imagination or are used fictitiously. Any resemblance to actual persons, living or dead, events, or locales is entirely coincidental.

The copying, reproduction and distribution of this e-book via any means, without permission of the author, is illegal and punishable by law. Please purchase only authorized electronic editions and refuse to participate in or encourage the electronic piracy of copyrighted materials. Your support of the author’s intellectual property rights is greatly appreciated.

It was the day after Thanksgiving. The first snowfall of the season had begun around noon, quickly blanketing Willowbury, a cozy New England town known for its revolutionary war history, covered bridges and picturesque landscape.

The Cards N’ Stuff Gift Shop occupied both floors of a gingerbread-style building located on Main Street, between the town drugstore and the library. It was fortunately positioned near the town square, the Willowbury Duplex Movie Theatre and the entrance to the interstate highway.

The shop was successful and thriving, especially now that the busy season had started. Its wooden floors creaked as customers crowded in, picking through sales items and roaming the narrow aisles, eager for a bright, discounted discovery.

Twenty six-year-old Jennifer Taylor, the owner and manager, stood near the window in her back office, alone, her arms crossed tightly against her chest. She stared blankly into the falling snow.

It was nearly a year since the death of her fiancé. Lance had died on Christmas Eve, the night before they were to be married. It seemed like weeks and it seemed like years. Already, Lance was becoming a half-remembered fiction. How could that be? She could easily recall his warm, generous smile; his long sandy hair; his dancing brown eyes. Yes, all of these she could still remember. But the sound of his voice and the scent of him—that unique alluring scent of his hair and neck—were dropping from her consciousness, like stones falling through murky water into sightless depths.

Christmas Eve. Only a year ago, yet so long ago. So far back into the past. So close to her still-aching heart.

They’d planned a beautiful wedding, making all the arrangements together: the church, the reception hall, the food, the flowers, the decorations, the limo. After a big send-off, they were heading to New York City for their honeymoon. The trajectory of Jennifer’s life had seemed assured—all things were going according to plan. Then she’d heard the news: the impossible, terrible news. Lance was dead. And just like that, her life, too, was over.

Jennifer stared into the white face of the day as dogs barked, kids ran for sleds, and plastic snow shovels scraped paths across sidewalks and driveways. It was a swirling, rich snow that quickened holiday hearts and herded bargain hunters into malls and shops.

Three inches of snow had already accumulated. Jennifer paced her office, peering miserably into the white wonderland. Through the closed office door, she could hear the murmur of bustling customers; the Christmas music; the constantly dinging shop-door bell, tolling the entrance and exit of shoppers. But she ignored them; she shut them out, as she had now for days. Perpetual restlessness had made her edgy and short-tempered. She felt a tightness in her chest. Her thoughts raced and then knotted, her forehead and neck were always damp. Christmas was coming and she had to find a way to survive it—and all she could see was an infinite blackness.

“The first year is always the worst,” a therapist had said.

Jennifer continued to stare strangely into the blur of snow, as if searching for some sign of understanding, some fragrance of wisdom, but all she felt was anger and bitterness. She cursed the snow. She cursed her life.

Startled, Jennifer jerked, pivoting toward the closed door. It was her assistant, Angela.

“Oh… God, please help,” she heard herself choke out. “Please…help me!”

Jennifer’s words pierced the boundaries of ceiling and walls and hovered for a time above the roof, near the chimney. As the rising smoke curled skyward, Jennifer’s words caught a spiraling draft and they sailed high into the infinite scattering snow, far beyond time and space.

In a land of dazzling sun and glittering emerald sea, the prayer splashed into the water; bobbed and drifted toward the shore. It washed up onto a broad wide beach like a message in a bottle. Someone retrieved it; someone who had been watching Jennifer for a long time; someone whose job it is to retrieve such things, a kind of sky beachcomber searching for buried hopes, lost wishes and pleas for help.

The message was retrieved and delivered.

Jennifer pushed herself up from the chair, took a hurtful breath and adjusted her slouching posture. She shoved open the office door and returned to the Christmas shopping frenzy.

Out on Main Street, the Mayor of Willowbury, J. D. Hartman, held the arm of his wife, Gladys, as they walked purposefully, working their way toward Cards N’ Stuff. Snowflakes frosted their hair and covered their shoulders.

Mayor Hartman was a robust man, with a winning smile, heavy face and aggressive manner. He charged through life enthusiastically, grabbing big chunks of it as he went. He’d grown up in Willowbury, gone to Russell College nearby, and married his high school sweetheart, Gladys Walker. Willowbury was his passion and his extended family.

Gladys was petite, with short, grey-and-black hair, friendly dark eyes and a personality so competent and quietly strong that many believed she was the reason her husband had been elected to a second term.

Gladys and J. D. promenaded down the street, smiling and waving to passing shoppers. They were also arguing.

“I haven’t seen the snow plow,” Gladys said, with a hint of a challenge.

“The snow plow is out, Gladys,” the Mayor said, bracing himself against wind, snow and his wife’s words. “I just talked to Dan, and he is out here—in the thick of it—hard at work.”

The Mayor adjusted the collar of his black cashmere overcoat, squinting in mild annoyance at his wife. “He started out by the highway, as per my instructions. He’ll be here presently.”

“After a stop at Shanahan’s Bar for some holiday cheer... or two or three,” Gladys added, wryly, gripping her hat and bending into the wind.

The Mayor bristled. “Now, Gladys, Dan is a good man. I appointed him myself and you have no cause to criticize him like that. You, who can be so generous and charitable. You, who have fought to improve day-care centers. You, who have organized teams of volunteers to tutor the illiterate. You, who have…”

Gladys pointed toward the shop, where a steady stream of patrons was entering and exiting. “Look how busy she is. It’s the busiest shop around.”

“She’s a damn good business woman,” Mayor Hartman said. “It’s a good thing she doesn’t have much of a personality. With her business skills and talent, she could run for Mayor and beat me.”

“But when you look at her, it’s so obvious there’s something missing in her life,” Gladys said. “She’s attractive, if she’d just fix herself up a little. She doesn’t look happy, and she’s always alone.”

“She wants to be alone, Gladys,” Mayor Hartman said. “We’ve invited her to three parties and she’s turned us down every time. But this time, I’m not going to take no for an answer! I’m going to invite her personally.”

They approached the front door, grinning, shaking hands and making small talk about the weather.

They drew up to the window displays and nosed forward. “Just don’t be too forceful with Jennifer, J. D. You know how you can be.”

The Mayor passed his wife a sour glance.

The left window depicted a happy family, blushed and perky, dressed in red and green, caroling around their upright piano. Little embroidered red stockings hung by a glowing fireplace, and beside the twinkling Christmas tree, a black and white dog howled, obviously not a music lover.

The right window showed Santa and his reindeer sailing through a deep purple sky of falling snow, over a Victorian Christmas Village, where gleeful, rosy-cheeked children pointed skyward. An electric train circled the village, tooting and puffing smoke, passing ice skaters and carolers.

“Charming,” Gladys said. “Very charming. Where did you say Jennifer is from?”

“A small town in Tennessee. Went to college there and majored in business. That’s about all I’ve ever been able to get out of her,” J. D. said.

“And she moved here in April?”

Gladys led the way into the shop. As she pushed the door open, the little bell “dinged.”

Customers pushed in and squirmed out in a steady stream, packages rustling, boots shuffling, hats and shoulders sprinkled with snow.

Inside, Gladys lifted her nose to the pleasant surprise of mildly spiced potpourris, scented candles and fresh pine coming from the decorated Douglas fir Christmas tree. The Mayor pulled his way through the crowd, nodding and grinning, pumping hands, delighted to move his bulky frame through the bundled bodies and stubborn customers. Bing Crosby sang
Silver Bells
from a CD player.

Gladys caught sight of Jennifer, who was presenting a music box to a weary and conflicted young man. Her thin shoulders sagged, as though some heavy burden weighed on her. She wore no makeup, and was dressed in a frumpy brown sweater, loose dark slacks and scuffed black boots.

Jennifer was attractive and slender, but her good looks were betrayed by a chilly demeanor and guarded insularity. She had chipped green eyes that were dulled and brooding, as if each moment held some freshly remembered melancholy—some old resentment that soured her on the world.

“I’ll take it,” the man finally said. Gladys watched as Jennifer handed it to the man and turned to help another customer. She was stunned to realize that this attractive and enterprising young lady gave the impression of being a woman old before her time.

With no hesitancy, Mayor Hartman advanced toward Jennifer. A fidgety middle-aged man examined a delicate Christmas ornament that Jennifer held up for his approval. He approved. He took it, pivoted and aimed for the cash register.

“Jennifer Taylor, how are you on this fantastically busy and snowy shopping day?” Mayor Hartman asked, with a broad grin, hand outstretched.

She took his meaty hand, and he pumped hers so energetically that Jennifer nearly lost her arm. “Can I help you find something, Mayor?” she asked, with a forced, tired smile.

The Mayor indicated toward Gladys, who waved and grinned brightly.

“No, Gladys takes care of all the shopping. Always has. Just has the gift for it, no pun intended,” he said, quickly, laughing loudly at his own joke. He turned serious, his broad bushy eyebrows lowering as his eyes narrowed. “Now, I’ve come to personally invite you to our Christmas party, which is going to be held on December 22nd. Gladys is known for her Christmas parties, far and wide. It’s the event of the year and we want you there. And we won’t take no for an answer.”