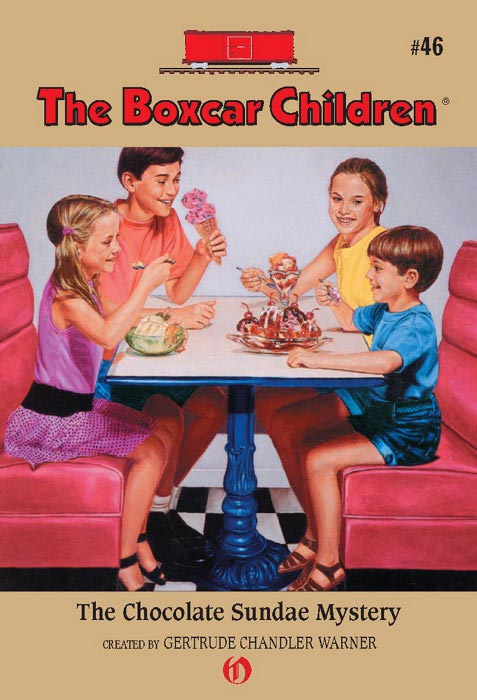 6 Benny Has a Dream

8 The Trail Is Cold

O
ne spring morning, four children stood outside their house in Greenfield washing the family station wagon. Six-year-old Benny Alden soaked his dirty rag in a pail of sudsy water. “Boy, it’s getting hot out here,” he remarked to his brother Henry.

Henry, who was fourteen, stood near Benny, carefully polishing the front bumper. “It sure is,” he agreed. “When we’re done, we could go get some ice cream at the Shoppe.”

The Shoppe was the oldest ice cream parlor in Greenfield. Benny thought it served the best ice cream in town — even better than the homemade ice cream their housekeeper, Mrs. McGregor, made with her old hand-held crank.

“Please, Jessie, just a small cone,” Benny pleaded. He wiped the fender even harder. “I promise it won’t ruin my appetite.”

“As if anything could,” Benny’s ten-year-old sister, Violet, said, chuckling. She made sure to wink at Benny so he would know she was teasing. Violet never wanted to hurt anybody’s feelings.

“Why don’t we just have our whole lunch at the parlor,” Jessie suggested. “I think they’re still serving tuna and grilled cheese sandwiches.” Jessie always had practical suggestions.

“Yes, I’m sure they are,” Henry agreed. “I’ve never known the Shoppe’s menu to change.”

“Grandfather says the menu is the same as when he was little,” Benny pointed out. “They’re still using the same ice cream recipes.”

“I’ll just run in to tell Mrs. McGregor where we’re going,” Jessie said. Mrs. McGregor, their grandfather’s housekeeper, took care of all the Aldens and their dog, Watch. Not that the Alden children needed much looking after. After their parents died, Henry, Jessie, Violet, and Benny had lived all by themselves in an abandoned boxcar in the woods. When their grandfather finally found them, he invited them all to live with him.

The children knew they were really going to love Grandfather when he made sure to give Watch and the boxcar a home, too. Watch lived in the house with the children, and the boxcar was kept in the backyard so the Aldens could visit it whenever they wanted.

Quickly Violet gathered up the dirty rags and put them in a pail of clean soapy water to soak. Henry coiled the hose and hung it on a hook in the garage. Benny put away the car wax and cleaning supplies.

“Mrs. McGregor would like us to pick up a gallon of ice cream for the house,” Jessie said as she came running out the front door with Watch at her heels.

“It looks like Watch wants to come with us,” Violet said, smiling.

“He can’t come into the Shoppe, though,” Henry reminded them. “You know they don’t allow dogs in restaurants.”

“Oh, Watch won’t mind waiting outside,” Benny said as he clipped a red leash onto Watch’s collar. “Almost everyone in Greenfield stops to pet him, don’t they, Watch?”

Watch cocked his head at Benny, but suddenly he jumped up and tugged at his leash.

“Hey, do you hear that?” Benny asked.

“Yes, someone is playing some music. It sounds like it’s coming from just down the street,” Violet said. She ran across the lawn with Benny and Watch at her heels.

“I think it might be an ice cream truck,” Jessie said as she and Henry caught up with the others.

Down the street the children could see a bright pink truck with a large green-and-white striped canopy over it. A loud melody sounded from the truck’s speakers. White and green balloons were tied to its back fenders.

“I’ve never seen an ice cream truck like that,” Benny said. His big eyes grew even rounder. Already a line of children had begun to form by the truck.

“ ‘Saunders Ice Cream Treats.’ ” Violet read the green lettering painted on one side of the truck.

“They sound very fancy,” Violet whispered as the red-haired girl in front of her ordered a coconut cone with chocolate sprinkles. The Aldens stood off to one side so the woman selling the ice cream would not think they were in line.

When the last customer had been served, the tall blonde woman behind the counter leaned out the truck’s window. “Are you in line? May I help you?” she asked. She even leaned further out the window of the truck so she could see the children better. The woman wore a bright red and gold sweater. Her thick blonde hair was pulled back with a large glittery gold bow. The deep, red nail polish on her fingers matched her lipstick.

“Uh, no, we were just looking,” Jessie answered politely. “Are you Mrs. Saunders?”

“Yes,” the woman answered proudly. “I own this business and the truck.”

“Maybe we should bring Grandfather and Mrs. McGregor back a carton of one of these fancy flavors,” Violet suggested to Henry under her breath.

“I bet Grandfather would like some hazelnut ice cream,” Henry answered just as softly.

“What’s that? Speak up,” the woman called. 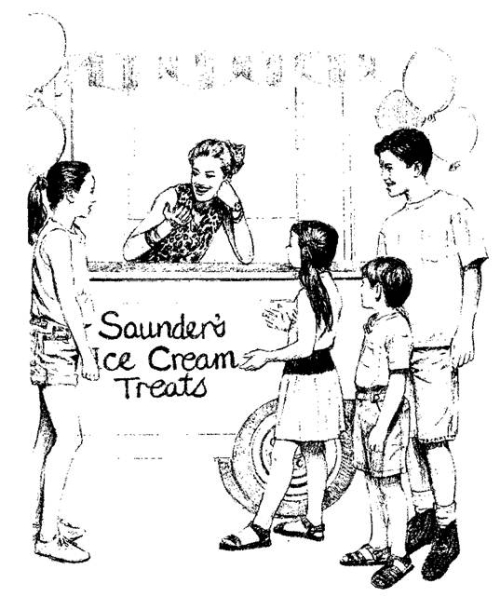 “Oh, Violet, I really wanted to get our ice cream at the Shoppe,” Benny said more loudly than he meant to.

At the mention of the Ice Cream Shoppe, the woman’s face fell. “Well,” she said huffily, “if you just want plain old-fashioned ice cream with no flavor.”

The woman rolled her eyes. “I can tell you children don’t know much about ice cream.”

Watch picked that moment to start barking at a squirrel. He pulled at his leash, as the squirrel raced up the tree.

“Please get that dog away from my truck,” the woman said, noticing Watch for the first time. “It’s not sanitary for animals to be near food.”

“We were just leaving,” Henry answered. His sisters had already turned to go. Benny gave Watch’s leash a firm tug.

“You know,” the woman called after them. “The Shoppe never tries new flavors, and what’s more, they’ve never remodeled their store. Their kitchen is probably filthy.”

Benny stared at the woman. He was so angry, he could feel his face turning bright red. “That’s not true!” he cried. “The Shoppe makes the best ice cream in Greenfield.”

“And their kitchen couldn’t be cleaner. We’ve seen it,” Jessie called as she put her arm around her little brother. “Come on Benny. Let’s just go to the Shoppe.”

“I
wonder what that lady has against the ice cream parlor?” Jessie asked thoughtfully when the Aldens were further down the street.

“Maybe she’s just mad the Shoppe is taking customers away from her business,” Henry suggested.

“She had lots of customers,” Benny pointed out as he stopped to wait for a red light.

“She did. But she probably knows it’s going to be hard to keep up with a place as popular as the Shoppe,” Violet said as the Aldens crossed the street.

“She didn’t have to be so rude.” Benny still felt upset. Without saying anything more, he helped Violet tie Watch’s leash to a tree.

“I know what you mean,” Jessie said sympathetically. She nodded at Benny before opening the door to the Ice Cream Shoppe.

“Hey, wait, Jessie, did you see this sign?” Henry said, as he pointed to the parlor’s big window. Violet read the sign aloud:

“I hope Tom still works here,” Benny remarked as the children went inside. Tom had worked in the parlor for as long as Benny could remember. Benny liked Tom because he always gave Benny an extra big scoop of ice cream and remembered to put extra cherries on the children’s sundaes. 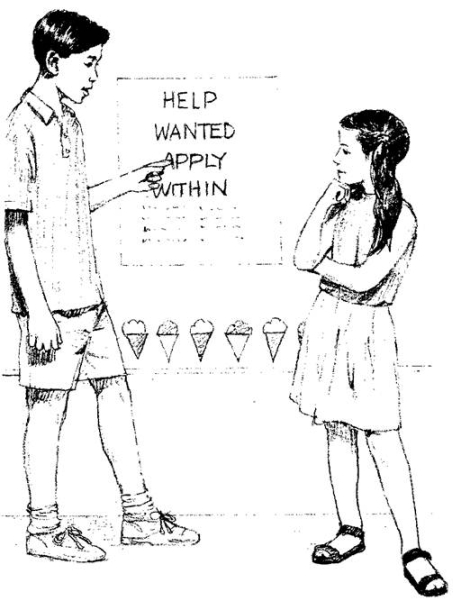 The Ice Cream Shoppe had a black and white tiled floor. Bright red and white lamps hung from the high ceilings. There were red leather booths facing the large picture windows and high stools by the wooden counter. In the middle of the parlor were small tables with marble tops, and chairs with comfortable red cushions.

Behind the counter hung a large mirror in a wooden frame. As long as the children could remember, an old-fashioned clock had ticked loudly in front of the mirror. Today the children noticed the clock had stopped.

“Oh no, I hope nothing’s wrong with that big clock,” Benny whispered sadly.

“Well, it was old; it probably got tired of running,” Jessie said. She tried to sound comforting, but Benny looked even sadder. He didn’t like it when anything in the parlor changed.

Quickly he stole a look behind the counter. He was relieved to see the shiny row of glass containers holding peanuts, cherries, chocolate sprinkles, and other sundae toppings, just the way he remembered.

“Let’s get a booth,” Henry suggested as his sisters grabbed some menus from the counter.

“Oh, look, they have fresh strawberry ice cream,” Violet said as she settled herself in the soft leather booth. She scooted over to the window to make room for Jessie.

“Do you think Tom is working here today?” Benny asked as he looked around the large sunny room.

“I don’t see him,” Henry remarked. “You know, this place seems different.”

“You mean because of the clock,” Benny suggested as he pored over the colored drawings of sundaes, banana splits, and other goodies on the menu.

“Not only because of the clock, Benny,” Henry said.

Henry nodded his head. “That’s just what I was thinking.”

At lunchtime, the parlor was usually so crowded it was hard to find a seat. Today nearly every booth was empty and only two people sat at the big counter.

“Maybe that ice cream truck is hurting the parlor’s business after all,” Henry said grimly.

“I just can’t believe it could,” Violet shook her head. “We should ask Ruth about this.” Ruth was the waitress who usually worked the lunchtime shift.

“I don’t see her working, either,” Jessie said as she took some napkins out of the dispenser and passed them around to her family.

“No,” Henry shook his head. “In fact, I don’t recognize the waitress on duty at all.”

Jessie and Violet turned to look at the dark-haired girl behind the counter. She had short black hair, almond-shaped eyes, and very fair skin. She wore a red-and-blue T-shirt underneath her white apron.

Rage by Kaylee Song
El vendedor más grande del mundo by Og Mandino
More Than Lies by N. E. Henderson
A Churn for the Worse by Laura Bradford
This Too Shall Pass by Jettie Woodruff
Destined for Power by Kathleen Brooks
Streams of Mercy by Lauraine Snelling
Nessa (Broken Sisters #1) by Brennan, M.
A Flight of Fancy by Laurie Alice Eakes
Red and the Roofers (Dale Jackson Series) by Anders, JD