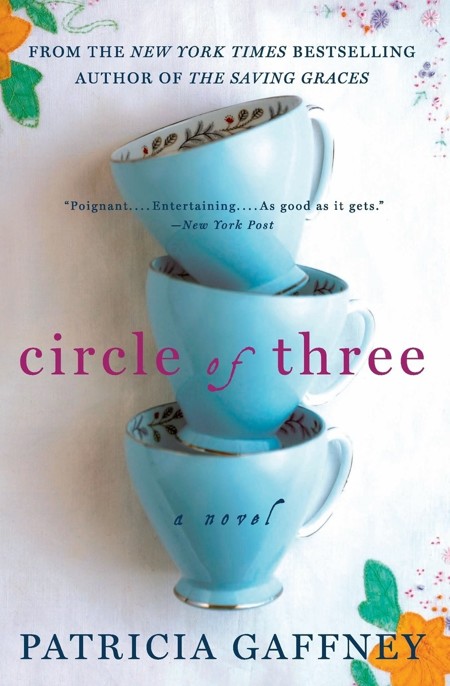 Separated at birth, no question.

A Woman is Her Mother

2
Not Enough Points to Be Anything

3
The Power of Nostalgia

5
Who Is That American Girl?

8
The Decency to Feel Bad

9
What Can You Do But Laugh?

12
Actively Growing Before Your Eyes

16
So Much for Candor

Praise for
Circle of Three

I
T’S NATURAL TO
feel guilty after the death of a loved one. Guilt and grief go together—that’s what they say. Because you’re still alive, I suppose. Well, lots of things are “natural,” including infanticide in some cultures. My teenage daughter’s extremely odd friend Raven recently shared with me that the female coot pecks to death all but two of her baby chicks because feeding them just gets to be too big a hassle. It’s nature’s way.

The presumption behind the guilt-is-natural bromide is that one hasn’t actually done anything to precipitate the loved one’s death. And there’s the rub. I provoked my husband into an argument five minutes before he smashed the car into a tree and killed himself. (That wasn’t the only thing I did, but it’s the showiest.) An incredibly stupid argument: why couldn’t he drive Ruth to her soccer tournament the next day, why did I always have to do it? When was the last time he’d gone to a parent-teacher conference, a science fair, anything? In six years Ruth would be twenty-one and out of his life; did he really want to spend the rest of his only child’s adolescence shut up in his office grading papers and writing—yes, I said this—obscure articles on mathematical minutiae that even more obscure journals only published once in a blue moon?

It was eleven o’clock, a Friday night. We were driving home after dinner with my parents, a dinner Stephen hadn’t wanted to go to in the first place—but then he never did, so I don’t take that so much to heart; I forgive myself for that. He said he was tired, but I thought nothing of it. Ruth, thank God, thank God, wasn’t with us; she’d gone to a birthday sleepover at a girlfriend’s. I’d spent the evening keeping a tense peace, smoothing over this, rephrasing that. My mother always liked Stephen, I’m not sure why, but he never liked her, and to this day she doesn’t know it. That’s my doing. For eighteen years, the length of our marriage, I constantly respun and reinterpreted his rudeness to her, at times his outright contempt. “He’s thinking higher thoughts,” I’d joke when he couldn’t bother to come out of his study when Mama made one of her (admittedly irritating) unannounced drop-ins. And she’s so easily intimidated by what she takes for intellectual superiority—except, interestingly, where my father’s concerned—so it was never hard to make her believe that Stephen wasn’t cold and disdainful, no, he was a genius. Geniuses are eccentric and brusque, they keep to themselves, they don’t have time to be ingratiating to their mothers-in-law.

What triggered the argument in the car was fear. I had seen something that night that scared me: a sickening similarity between my husband and my father. Getting angry at Stephen, trying to get a rise out of him, trying to make him yell at me—that would’ve been ideal—was a way to convince myself I’d seen no such thing.

My father, George Danziger, taught English literature at Remington College for forty years. He recently retired, to write a book with a colleague on some minor eighteenth-century poet whose name I’ve forgotten. My father is a short, heavyset man, balding, slope-shouldered; he has a paunch; he slouches; pipe ash usually litters his vest or his coat sleeve. He frequently wears a vacant expression, and I suppose he’s as close to the cliché of the absentminded professor as a human, as opposed to a cartoon, can be. But
there’s still a rumpled dignity in his sagging face and his gentle, phlegmatic movements, at least to me. Stephen was his physical opposite. Medium tall with a hard, compact, runner’s body, he had handsome, sharp-pointed features—like Ruth’s—and a full head of crisp, curling, sandy-gray hair. Quick, economical gestures. And always a restlessness about him, an impatience with his surroundings that could be insulting if you took it personally.

Mama and I did the dishes while the men went outside so Pop could smoke his pipe, a forbidden pleasure in my mother’s house. I watched them idly through the kitchen window, standing beside the wrought iron table in the late-August hush, their shoulders hunched, chins pulled into the collars of their short-sleeved shirts. They didn’t have much to say to each other, but then, they never did. The college was all they had in common, and Stephen still, after three years, secretly resented Pop for his help, such as it was, in getting him his teaching appointment. They kept a manly distance apart, and even when they spoke they never looked at each other. They shuffled from foot to foot, hands jammed in their pockets, and squinted up at the night sky over the roof as if they were watching a movie.

Just in that moment, as different as they were, they looked the same to me. Identical. I had my hands in hot water, but I remember the coldness that came into me, like the flat of a blade on bare skin. The chill thought crept in that they
were
the same.

Impossible—Stephen had stubbornness in him, a temper, a mean streak, Stephen was
alive
. I thought of my mother’s discontent and disappointment, what they’ve turned her into and who she blames them on, and I thought, What if, by marrying a man as absent and unreachable as Pop, I’ve made the same mistake she made? Not a similar mistake,
the exact same mistake
.

So I started a fight. Unlike my father, Stephen could give as good as he got—better. His trusty weapon, cold, withering logic, always trounced my teary, incoherent furies, no
contest, a sword fight with a balloon. But that night I didn’t care, I wanted noise, racket, action. I waited until we were driving home on Clay Boulevard, a straight, well-lit stretch of four-lane highway, no distractions. It didn’t matter to me what we fought about, but I was tired, and driving Ruth to her soccer game in Charlottesville on Saturday would mean getting up at six in the morning. So I chose that.

Stephen never said a word. It’s been four months, and I can’t recall anything he said that night in the car. That makes me inexpressibly sad. I, on the other hand, had quite a lot to say before he rolled down the window—the first indication that something was wrong. It was chilly, I was still fiddling with the heater knobs trying to get warm, I thought he was opening the window to thwart me. “Aren’t you going to say anything?”—I can still hear the shrill nastiness in my voice. He made a face, a grimace, but I couldn’t see his coloring in the dark, only that his mouth was contorted. “What’s wrong?” I still wasn’t worried, only puzzled. He said my name, “Carrie,” and nothing else. He never clutched at his chest, that cartoon gesture of a man having a heart attack; he clutched his arm, before he slumped over against the door. It happened very fast. One second we were driving in our lane, the next we were careening across the grass median with headlights in our eyes, horns blaring, cars swerving. I grabbed the wheel and we slowed slightly, but Stephen still had his foot on the gas and I couldn’t get my legs untangled fast enough to kick it away. Panic swallowed me. Under it, I remember feeling sad because here was the end, the end of me, broken and smashed in high-velocity metal and glass. Ruth wasn’t a conscious thought, but she was the weight, the shadow in my brain closing down over everything.
Oh, my baby.

Steered isn’t the right word, somehow I
got
us across two lanes of eastbound traffic without hitting anything. We lurched onto the verge and down a gravel embankment, bumped up a shallow rise. The car’s violent motion shoved
Stephen back, finally threw his foot off the accelerator. We might’ve come to a natural stop, but we clipped a line of trees just over the top of the ridge. The car spun around when the bumper caught, and smacked in back against a tree trunk. My head hit something, I think the window on my side before the door snapped open—my seat belt kept me from flying out.

Lights, noise. I was out cold until two boys, Remington students, unbuckled me and pulled me out of the car. They wouldn’t let me sit up, made me lie flat on the ground. “Where is my husband? How is he, my husband?” They wouldn’t say. Then the police, the ambulance, the rescue squad truck. “Is my husband dead?” I asked a young man in a paramedic’s jacket, holding on to his sleeve, not letting go until he told me. “Ma’am,” he said, “we’re doing everything we can.” They were at that moment doing CPR, I discovered later, trying to restart Stephen’s heart. But it never beat again.

That’s what I did. One can make a little or a lot of it, I’m aware. I’ve done both, countless times. Either way, I think it’s plain that my guilt, alive and well four months after my husband’s death, goes beyond the province of “normal.” Ruth and my mother say it’s time I pulled myself together, started functioning again, found a real job, got on with life. Is that heartless? It’s true I’m a mess, no good to anyone, and my daughter needs me now more than she ever has.

What they don’t know is that there’s more. The argument in the car was only the most conspicuous of my numerous failings and regrets. One in particular pains me. It’s a little thing in itself, quite petty. Commonplace. But shabby, you know, distressing to admit. Although nothing truly shameful. Oh, well, it’s only this—Stephen and I made love the night before he died. That ought to be a kind memory, a comfort to me—
at least we were intimate that one last time
—a blessing, an incremental notch in favor of life on the
big, overbalanced scale. But I ruined even that. I know it’s a little thing, but I can’t forgive myself. The very last time my husband’s body came inside my body, I shut my eyes and dreamed he was someone else.

The Devil's Secret by Joshua Ingle
Hero by Mike Lupica
Echoes from My Past Lives (Spell Weaver) by Hiatt, Bill
The Warmth of Other Suns by Isabel Wilkerson
The Fish Kisser by James Hawkins
Deep Surrendering: Episode Four by Chelsea M. Cameron
On Photography by Susan Sontag
Tempted by Two Angels [Notorious Nephilim 3] (Siren Publishing Ménage Amour) by Carolyn Rosewood
Free For Him by Sophie Stern
The Company You Keep by Neil Gordon