City of Devils: A Novel 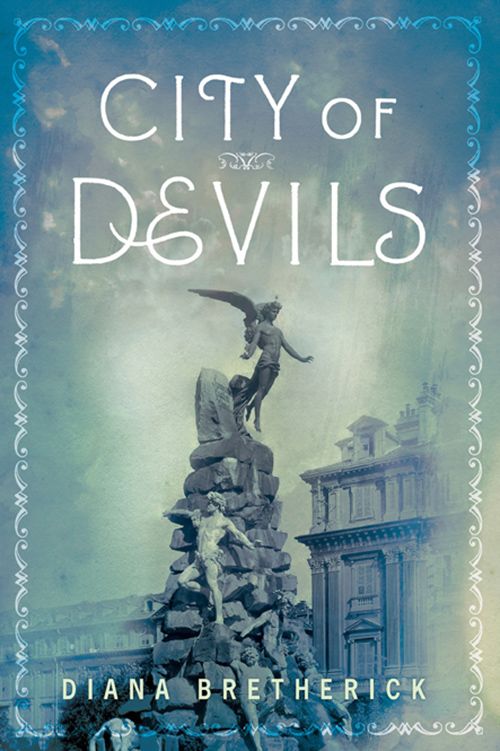 In general thieves are notable for their expressive faces and manual dexterity, small wandering eyes that are often oblique in form, thick and close eyebrows, distorted or squashed noses, thin beards and hair and sloping foreheads. Like rapists they often have jug ears.

Giuseppe Soldati stopped suddenly and sniffed the air as if he was a beast on the trail of its prey. He could smell some-thing tart and unpleasant that reminded him of sour milk. He looked around to see if someone was following him but it was difficult to tell. The narrow lane was winding and there were plenty of hiding places. As he peered into the darkness, he could see his breath forming small clouds of vapour in the cold, damp air. Soldati was accustomed to the night and its secrets and he sensed that he was not alone. Despite this he could see nothing, which, he supposed, was hardly surprising given the lateness of the hour. As if to confirm it, he heard the bells of Chiesa di Santa Teresa softly chime in the distance. It was midnight. He shook himself and hurried on, heaving the small sack that contained the spoils from his night’s work higher onto his back. He stopped again. This time it was more than just a smell. He could hear it quite clearly in the stillness of the night even though it was little more than a whisper.

He pulled the sack round and clutched it to him. He had worked hard for his ill-gotten gains and he wasn’t about to lose them to a fellow thief. Every instinct told him to run – and yet he was curious. Who would be calling out his name at this time of night?

‘Giuseppe Soldati,’ whispered the voice again, more urgently this time. It seemed to come from nowhere as if it was a spirit – perhaps of one of his victims returned from the grave to seek vengeance. He gulped and crossed himself but God offered no protection.

He moved away cautiously, his eyes moving from side to side like an agitated reptile. By now the sense of being followed was almost overwhelming. He was surrounded by shadows that seemed to lurk down every alley and in every doorway as if waiting for him to pass before leaping out at him. Once or twice he thought he could hear heavy breathing – almost like panting. But when he stopped to listen all he could hear was his own breath and his heart beating ferociously as if it was burrowing through his chest in a bid to escape.

Soldati set off once more, telling himself not to be a fool, that it was simply a case of his imagination playing tricks on him in the darkness. But then his name was called for a third time.

Somewhere between a whisper and an incantation, the words seemed to hang in the air as if waiting for him to snatch them away. He came to an abrupt halt and looked around him, trying to work out exactly where the voice had come from. Before it had been behind him but now it seemed to come from everywhere so he did not know whether to run forwards or retrace his steps. As he swivelled in confusion, first this way then the other, he thought he could hear laughter. Soldati started to move forwards but then a figure stepped out of the darkness and blocked his path. He turned to run away but he was not quick enough.

His last thought, as he felt the garrotte tighten around his throat, was not of his family or acquaintances – who all loathed him. He didn’t even ask himself why he was being murdered. He knew perfectly well there were plenty who wished him dead. Instead, ever the professional criminal, he wondered why his killer needed a knife. He could have sworn that he had glimpsed a tell-tale glint of metal as the noose was slipped around his neck with the deftness of the skilled assassin. Then the final blackness descended upon him and for Soldati it ceased to matter.

It was just as well that he did not live long enough to find out the answer to his final question. The knife was put to work in such a hideous fashion that those who later saw the body were quite unable to put the image from their minds.

Soon the dense Turin fog swept in from the river and surrounded Soldati like a clammy shroud. His attacker had long since melted into the mist and he was left, propped up against a monument that was dedicated to the dead, like a sacrifice to an unnamed idol. A fitting end, for Giuseppe Soldati’s last resting place in the Piazza Statuto was reputed to be the black heart of the city, a point of pilgrimage for Satanists, the location of the gates of Hell itself. The monument was topped by a stone angel that stared down at the corpse below with an expression that might have seemed strangely malevolent for a creature of God. For Lucifer, though, whose likeness it was said to be, it was more than apt.

Tests of compression show rapists, brigands and arsonists to be stronger than murderers and robbers, who are in turn stronger than forgers and thieves
.

It was torture . . . or at least that’s what it looked like. A bearded, thickset, middle-aged man stood in the centre of a large room in his shirtsleeves. He was manipulating a younger man into a fearful looking contraption with leather buckles, dials and metal spikes. It was not a straightforward process. The younger man did not fit easily into the equipment and there was a certain amount of grunting and cries of pain as he was pushed this way and that.

James Murray stood half hidden, watching in the doorway. He ran his hands through his thick dark hair as he always did when he was trying to work out something that perplexed him. After a moment or two he leant forward, as if to get closer to the scene being played before him, his brow creased with concentration.

He weighed up the evidence, just as he had been taught to do by his tutor Dr Bell when he was studying to be a doctor in Edinburgh. Everything indicated that he had stumbled on a medieval torture chamber, except in this case, despite his evident discomfort, the subject seemed happy enough to comply. The older man was still having some difficulty in sliding his companion into the correct position. Seeing James, Professor Lombroso, for so he turned out to be, beckoned him over.

‘You over there – give us a hand, won’t you? This is clearly a task for two rather than one!’

James obeyed and under the older man’s direction held the subject by the shoulders, steadying him whilst the various straps were fastened.

‘Now all that is required is the calibration of the dials and we can start the experiment. Perhaps you could assist by recording the results, as you have already been so helpful?’

James nodded. He had not expected his chance to come so soon and he was somewhat apprehensive. But this was at least one of the things he had come to the University of Turin for – hands-on experience of the new science of criminal anthropology, and it was an opportunity he could not turn down. Being in a foreign city had already lifted what had become his natural state of gloom and now, despite some reticence in the face of something unfamiliar, he was exhilarated at the chance to be a part of something that previously he had only read about. The professor gestured towards the equipment.

‘Now, young man, what you see here is a measuring device. You see this oval in the centre?’

James nodded and moved closer to inspect it.

Professor Lombroso looked at him, bushy eyebrows raised. James leaned forward and put his hands round the oval, expecting it to be cold and unyielding. Instead it was soft and flexible. He nodded as if he had been expecting it all along.

‘Exactly! You see it’s made of a pliant metal. Our subject here has to compress and pull at it so that we can test his strength. Off you go, Ottolenghi.’

The subject grunted as he pushed and pulled. Beads of sweat started to appear on his forehead. He stopped and mopped his brow with a handkerchief.

The professor urged him on. ‘Come, my friend. Keep it going or we won’t get a decent measurement.’

Ottolenghi gave a rueful grin and started again. Lombroso looked over his gold-rimmed glasses at James. ‘Now what I need you to do is to keep an eye on these dials and call out the numbers on them as accurately as you can. Do you think you can do that?’