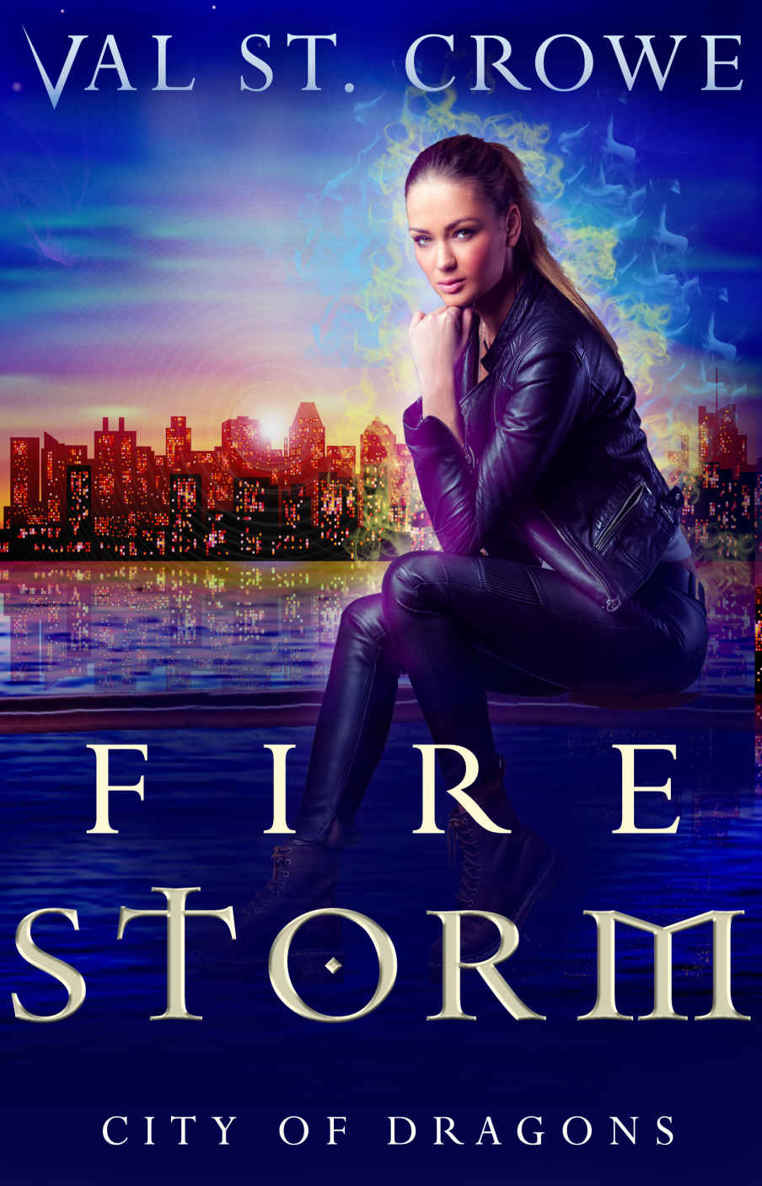 Penny Caspian here. Another day, another dead dragon shifter in Sea City. This one’s Fletcher Remington, a rich playboy who enjoyed surfing and heroin until he disappeared without a trace. Detective Lachlan Flint and I are on the case, mixing it up with the upper crust to find out what happened to him.

Speaking of Lachlan and me—we’re in a holding pattern. He’s afraid to get close to me, because he’s apparently so mesmerized by the taste of my blood that he’s afraid he’ll lose control and hurt me. I keep saying that I can take care of myself, but it’s like he’s deaf.

And the one time he does actually get swept up in the moment and kiss me again, my ex shows up. Yeah, the abusive jerk has powerful magic now—I don’t know from where—and he’s got no qualms about using it to beat me senseless and pummel Lachlan too.

My ex wants me back, but that’s never going to happen.

Please do not copy or post this book in its entirety or in parts anywhere. You may, however, share the entire book with a friend by forwarding the entire file to them. (And I won’t get mad.)

“Wait, I don’t get it,” said Connor Beckett, folding his arms over his chest. Connor was a gargoyle, and his uniform polo shirt stretched tight over his gray, chiseled-looking chest. He had wings too. “Let’s go over all of this again.”

“Again?” I said. I might have thought Connor was attractive, but he was gay, for one thing. For another thing, he was my employee. The uniform he was wearing had the name of my hotel emblazoned on its front pocket: the Purple Dolphin Hotel and Suites. And finally, he was like the kid brother I never had. It would have been incestuous to think he was attractive. But that didn’t mean he wasn’t. He was living stone, like some kind of walking, talking work of art. “I have explained this numerous times. On numerous occasions.”

“Yeah, but it still doesn’t make any sense.” He lounged against the main desk in the lobby of the hotel.

I was on the other side. Ostensibly, I was doing rounds to make sure that everything was okay in the hotel. Last month, we’d been deluged with spring breakers, and it had been a bit chaotic. Things had calmed down again, but it was only the lull before the storm of summer season. Anyway, the lack of action meant that I could spend time gabbing with Connor.

I sighed. “It doesn’t have to make sense. It’s none of your business, anyway.”

“Girl, please,” he said, shaking his head at me. “You need my advice on your love life.”

“Which is why you need me.”

“But let’s go over this kiss again, hmm?”

“No.” I was sulking, but if I’d really been that annoyed, I would have just walked out of the room. The truth was that it was nice to have something a little bit silly like a burgeoning romance to talk about with my friend.

“You said it was all cinematic, like the camera panned back to show the sky and the sea and—”

“I didn’t say anything like that. You’re inventing all of this.”

“But it was an amazing kiss?”

“Fine?” He made a
pfft
noise. “It was way more than fine. For days afterward, you were practically glowing.”

“I was
not
.” I did not glow. Maybe that was something I used to do, but all of that was in the past.

“Look, I’m just saying that you like him, and he likes you, so why aren’t you guys like an official couple by now? How long ago was that kiss?”

Now I
was
starting to get a little perturbed. Maybe it was because I hadn’t realized how long ago it had actually been. “Look, we kissed, and it was nice, but after it was over, we were both pretty freaked out, and we agreed that we weren’t ready for it, and we decided we’d take a step back. I mean, neither of us have the best of luck in relationships, you know.”

“All the more reason to get back in the saddle,” said Connor. “Erase all the bad juju.”

My ex-husband Alastair had been abusive. We were both dragon shifters, and we had a mating bond. That meant I was inexplicably drawn to him, even though he hurt me.

And Lachlan Flint, the other side of this kiss, had it even worse. His marriage had broken up when his stepson had shot both him and his four-year-old daughter. The little girl had died, but Lachlan’d had vampire blood in his system, so he’d come back as a vampire. He was completely destroyed over it, and when he said he wasn’t ready for a relationship, I absolutely understood.

But had it really been a month and a half?

“Honestly,” said Connor, “he hasn’t even been around all that much lately.”

“I think he got pulled in on doing spring break duty. Running around busting loud parties, that kind of thing,” I said. “He hasn’t needed my expertise.” I was the magical creatures consultant to the Sea City Police Department, and Lachlan was the officer who handled the magical creatures cases. Since the big serial killer case in March, things had been relatively quiet.

I glared at him. “You know that lack of a filter on your mouth? You might think of developing one.”

He shrugged. “Sorry. I can’t help it. Stuff just flies out. Anyway, I don’t mean he’s avoiding you because he regrets the kiss or anything. Because any straight guy out there would be lucky to kiss you.”

“I’m serious. And I know he likes you. I just think that he’s afraid of commitment or something.”

“Well, I am too,” I said. “Anyway, why are we talking about me and my pitiful lack of a love life? You’re the one who’s had guys in and out of here the past few weeks.”

Connor looked embarrassed. “Just ‘cause of all the spring breakers,” he said. “Lots of young, unattached, hot guys.” He got a wistful look in his eye. “And now it’s May, and they’re all gone.”

I reached across the desk to pat him on the arm. “Oh, I’m sorry.”

He turned sorrowful eyes on me. “I know. It’s the saddest thing in the world, really.”

I couldn’t help but laugh a little.

He stuck a finger in my face. “Hey, it’s not funny. And besides, I’d much rather find someone that I really connected with, instead of just a string of drunken hook-ups, you know?”

“You and Felicity both are off the market now, and I’m all alone, still.”

“Hey,” I said. “First of all, not off the market. Taking it slow—month-and-a-half slow, as you just pointed out. And secondly, you are never alone. I’m always here for you. And so is Felicity, in her own, very preoccupied, way.” Felicity was my best friend. She was newly in a live-in relationship with a vampire named Jensen. We never saw her these days, because she was too busy making googly eyes at her new beau.

Connor giggled. “She is so dick whipped.”

I sighed. “You know what, I really am leaving to go check the hotel.”

I started out of the lobby, waving as I went.

“You can’t handle a little dick?” he called after me.

The shell was ringing.

I was lying on a towel on the beach, soaking up the rays, holding a beautiful conch shell up to my ear, and it was ringing.

That wasn’t a shell.

It was my phone.

And I wasn’t on the beach. I was in my bed, dreaming of shells and beaches and—

I sat up, grabbing my phone off the bedside table. “Felicity?” I said into the receiver. “Did he hurt you?”

“It’s Lachlan,” said the soft Texas drawl of the voice on the other end of the phone.

I cleared my throat. “Okay, I was asleep.” Why had I lied to him? I didn’t want him to think I was a lazy person who slept in late, I guessed. “Um, it’s good to hear from you.”

Crap. Should I have said that?

“Penny, I’m sorry I… When we talked before, I thought we were on the same page,” he said.

“We are,” I said. “Taking it slow. Slow like a glacier. I’m cool with it. It’s what I want.” I cleared my throat again. Damn, maybe I should shower and have coffee before trying to put together sentences.

He was quiet again.

“Have you ever read
Jane Eyre
?” he said at the same time.

“Charlotte,” he said. “Jane and Mr. Rochester are kept apart because of all of his horrible secrets—”

“But we don’t have anymore secrets,” I said.

“Look, the point is that it isn’t so easy,” he said. “You can’t simply jump from one kiss to happily ever after—”

It was my turn to be quiet.

“If I had my crazy wife locked upstairs in my attic, then you would understand why I was hesitant to jump into anything,” he said.

“What? Your wife is crazy?”

“Oh, sorry,” he said. “That’s kind of a major spoiler. Still, with a book that’s been out a hundred years, the ending’s kind of out there, don’t you think? I mean, were you really ever going to read it?”