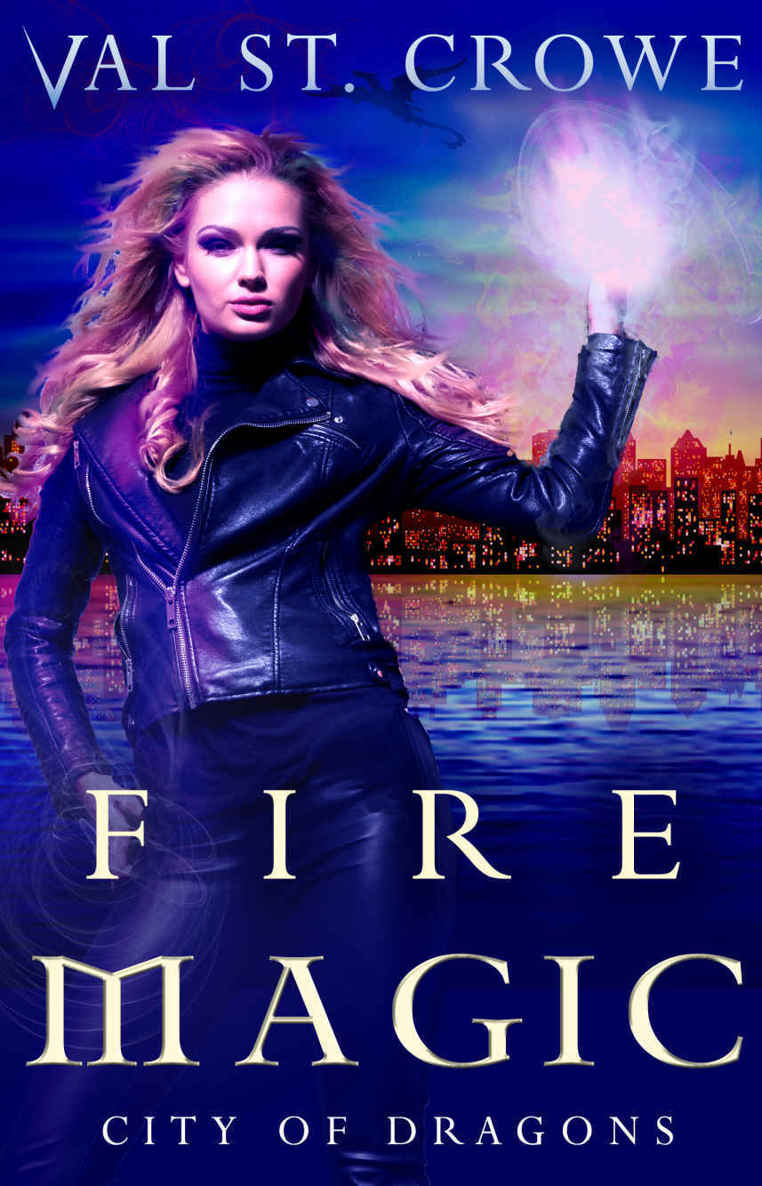 Alastair Cooper, my abusive ex-husband, is dead. Found in dragon form in a slayer’s cooler, an arrow in his heart. But before I can start dancing for joy, I find that I’m the main suspect in Alastair’s murder. The only person the police think is more likely to have committed the crime is Lachlan Flint, my boyfriend.

After we’re arrested and spend a night locked up in a jail that leaches the magic from our bones, we know we’ve got no choice but to find out who really killed Alastair. We’ve got to clear our names.

I can’t go to prison. I’ve got a baby on the way, and I have to do whatever I can to protect my unborn child. Of course, Lachlan doesn’t know about that. How do I tell him I’m pregnant?

Please do not copy or post this book in its entirety or in parts anywhere. You may, however, share the entire book with a friend by forwarding the entire file to them. (And I won’t get mad.)

“Lachlan is your ex?” said Shirley Rawlinson, the department therapist for the Sea City Police.

“Right,” she said. “Of course. I got confused for a second.”

“I thought you saw Lachlan sometimes.”

“I see a lot of patients.” She smiled at me in a reassuring way, but it also managed to look somewhat condescending. “So, let’s get back to these nightmares, then.”

“What about them?” I said. I was pretty sure that I had explained the nightmares already. I was trying to move on to the actual trauma, and she was stuck on something we’d already talked about. I wondered if she’d even been listening to me. She was sitting across from me, scribbling notes, but I thought maybe she was doodling or something.

“I dream about Alastair.”

I glared at her. “What do you think he’s doing?”

She flipped back through her notes. “You said that you were unconscious during the sexual assault?”

“But you’re having nightmares about being assaulted?”

I sighed. “Look, it isn’t as if he hadn’t done it to me before, you know. I was married to him for years.”

“Right.” She pursed her lips. “You seem to have a lot of anger.”

“You take what I’m saying to you as an attack?”

I sighed again. “What do you want from me?”

I regarded her with suspicion. So she said. But I was finding myself incredibly uncomfortable with the entire process of telling all my secrets to a stranger. I had been to therapy a long time ago, after my parents had died, but I didn’t remember it being like this at all. This felt so confrontational. I shook my head at her. “If you’re trying to help me, why is there an accusation in every question you ask me?”

She raised her eyebrows. “What do you think I’m accusing you of?”

I folded my arms over my chest. “You saying you’re not accusing me of anything?”

“Do you feel that you should be accused of something? Do you feel guilty?”

“Back to the nightmares. It sounds to me that you’re experiencing post-traumatic stress associated with both the event in which your ex-husband abducted and assaulted you and for the years that you spent living with him. Have you ever been treated for post-traumatic stress?”

“No,” I said. “Are you going to give me drugs? Because I don’t know if I mentioned it, but I’m pregnant, and I don’t want to take anything that causes risks for the baby.”

“Pregnant?” She looked surprised. “You didn’t mention it. How did you become pregnant? Is there a chance that the pregnancy is a result of the assault?”

“It definitely is,” I said.

“You said about a boyfriend. There’s no chance that he—”

“Oh,” she said, and then she drew her eyebrows together in a taut V. “Flint,” she murmured. She looked up at me. “Your boyfriend is Lachlan Flint.”

“You remember him now?”

She made a wry face. “Flint is nothing if not memorable. Is that relationship…?” She trailed off.

“He’s great,” I said. “He’s got some issues, sure, but he’s solid and supportive and nice.”

“Let’s talk about how he interacts with you, not me,” she said. “So, is there friction between the two of you about the pregnancy?”

“He doesn’t know,” I said. “You can’t tell him, right? We have like a patient-doctor privilege or something?”

“That’s correct,” she said. “As long as you don’t confess a crime to me or something of that nature. I can’t shield you from the law.”

She nodded slowly. “That’s a secret you can’t keep indefinitely, unless you’re planning to terminate the pregnancy, but if that were the case, you wouldn’t be concerned about medication affecting the baby.”

She raised her eyebrows again. “Oh.” She folded her hands over each other in her lap. “You’ve been through quite a lot, haven’t you?” And now there was pity in her voice.

My nostrils flared. “There’s the accusation again.” I raised a finger. “Have you been through what I’ve been through?”

“All of us have unique experiences, Penny.”

“But,” she continued, “you’d be surprised how many people go into therapy because they’ve been helped by it. I have been through painful experiences. I was a victim of abuse as a child by my own parents. And when I was removed from that situation, I was shuffled through several very difficult foster homes before things got better. I say this not to compete with your pain, but to try to let you know that I am not actually accusing you of anything.”

I looked down at the floor. “I’m sorry.”

“No need to apologize. I never intended to imply you were doing anything wrong. You’re punishing yourself.”

“And you internalized that?”

“That’s a very normal reaction, you know,” she said.

“Yes,” she said, and she smiled again. She cocked her head to one side. “Tell me the truth, Penny. You are bothered by the things that have happened, aren’t you?”

“Lachlan keeps saying that I’m running from facing everything. Maybe he’s right. Because I guess I don’t feel that bothered. And I feel like that’s a good thing,” I said. “I don’t want to dwell on all that sadness. I feel like it would swallow me alive.”

“For years,” I said. “With Alastair. He forced me to feel pain on a daily basis. Now I’m free of that. I don’t have to feel it anymore.”

After my therapy appointment, on my way out of the station, I saw Lachlan coming through the doors from the outside. Sunglasses obscured his face, but he had his typical blank, bored expression. He was wearing a suit, even though it was in the nineties outside on this July afternoon, and he still managed to look cool and collected.

I tried to duck out without catching his eye.

But he noticed me, and he pulled off his sunglasses, a grin overtaking his face. Lachlan was incredibly attractive, dimples and all. He came over to me. “Penny, what are you doing here?”

I was half-afraid he was going to try to hug me or kiss me or something that couples do when they see each other, and I took a step back. “I was seeing the therapist.”

But he didn’t make any moves to touch me. “Oh, you finally did that, huh?”

“Things kept coming up.” I folded my arms over my chest. “The hotel is booked solid now that we’re into the summer season, and I’m very busy.”

“Yes, I know this, since I never see you anymore.” He was still grinning. He gestured with his head. “Hey, come back to my desk for a minute. I got something to show you.”

He just laughed. “I really don’t. It’s been two weeks.”

“We talk,” I said, feeling defensive. We did. On the phone. Nearly every day. But it was hard to be around him. I felt confused when he was close. I liked him, but I knew that couldn’t last. Once he found out I was pregnant, things were going to get weird between us, and I didn’t want it to hurt a lot, so I guessed I was keeping him at arms’ length.

“Sure, we talk.” He tucked his sunglasses into his jacket. “You coming to see this or not?”

“What do you want to show me?”

“Well, it’s news,” he said. “I don’t know if it’s good or bad. Kind of depends on your perspective.”

“You’ll want to be sitting down for this.” He turned and headed for the elevator on the other side of the room.