City of the Falling Sky 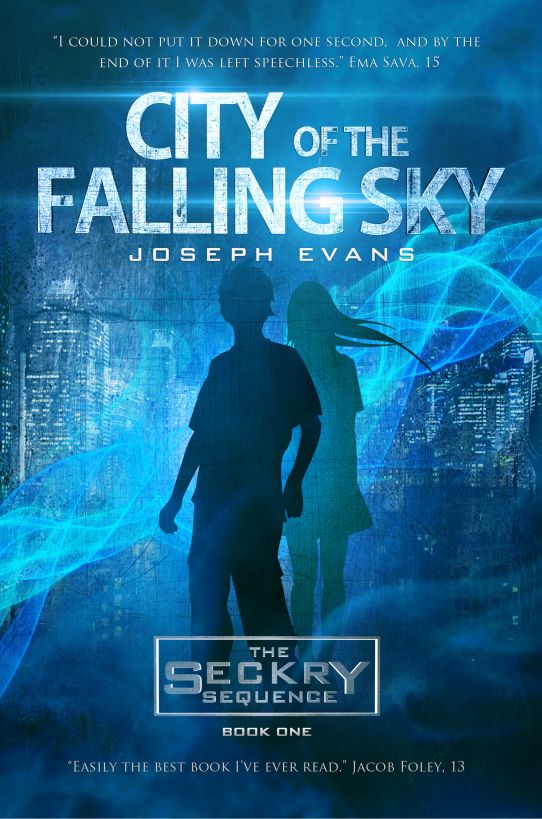 “
Dad, look at this one,”
said Seckry. “It’s all squishy and there’s something wriggling in
it!” He thrust a berry into his father’s face.

“
Ubberworms love
ellonberries,” Pawl said. “You’ll find quite a few of them, so
we’ve gotta do a good job of selecting the good ones. We don’t want
any of them getting cooked in your mum’s pie. Imagine your sister’s
face if she found a worm in her pudding.”

Pawl nodded seriously. He picked a
particularly plump berry from one of the bushes, quickly inspected
it, then popped it into his mouth.

The taste of ellonberries was like nothing
else in the world. Pawl closed his eyes as the soft skin popped
between his teeth and the bitter, fruity tang of the juice
transformed in his mouth into a rich, sugary syrup.

“
Oh yeah,” Seckry suddenly
remembered. “Mum said you better not eat them all before we get
back.”

Seckry placed his basket of berries on the
ground and collapsed into the grass with a sigh.

Pawl inspected Seckry’s basket. There were
twelve berries in total. Seven if he didn’t count the ones Seckry
had accidentally crushed whilst picking them.

“
I tell you what,” Pawl
said. “If I had been able to pick that many ellonberries when I was
your age, I’d be the best berry picker in the world by now. Hey, I
think I found a big bunch of them hidden away at the back
here.”

Pawl reached into the bush but quickly pulled
his hand out.

“
You’ve been telling me all
day to be careful, dad. You should have listened to
yourself.”

Pawl felt his wrist swelling. He unstrapped
his watch and laid it on the grass before rubbing a generous
helping of cold ointment onto the raw bulge.

As he was doing so, Seckry picked up the
watch and examined it closely.

“
Hey, hey,
hey,
” Pawl
said, taking the watch from his son quickly. “You’re not supposed
to pull that part off.”

Seckry had unclipped the main bulk to reveal
a disc underneath, a circle of glowing green light that was
inscribed with foreign markings.

“
But look, dad!” Seckry
said. “There’s something weird and green there.”

“
Yes there is. And you’re
not supposed to have seen it.”

“
Because, Seckry, it’s
something very important. And something that nobody apart from me
is supposed to know about.”

Pawl sighed and looked at his son.

“
This will have to be a
secret between us two, okay? You can’t go telling mummy,
understood?”

“
No you can’t!” Pawl
laughed. “You told your mum I had got her those earrings for her
birthday last year!”

“
Do you promise not to tell
mummy?”

“
Well this isn’t just a
normal watch,” Pawl said hesitantly. “It’s a very special watch
called a xinary. It does something very important for me. It tells
your dad that everything is okay.”

“
How does it do that?”
Seckry said curiously.

“
Well, you see this secret
circle that you found? You see that it’s the colour green? That
tells me that everything is good, and there’s nothing to be afraid
of.”

“
So what happens if it turns
a different colour?”

Pawl laughed. “Well, Seckry, you’ll be
waiting a long time for that to happen.”

“
Yeah but what happens if it
does?”

Seckry’s eyes widened for a moment, before
giving his father a suspicious stare.

Pawl laughed and picked his son up.

“
There’d be huge explosions,
like this!” He made a loud noise and lifted his son high into the
air.

Seckry screamed and then giggled.

“
Because in the whole of the
world, only one xinary exists. This one right here.”

“
Really? That must have cost
loads of money if it’s the only one.”

Pawl felt the slight coolness of the evening
air brush against his face and the sun was now sinking into the
grassy horizon behind him.

“
Come on, you,” he said,
ruffling Seckry’s hair. “We better get going or your mum will think
we’ve been eaten alive by these bushes.”

After a delicious helping of ellonberry pie
that evening, Pawl and Coralle Sevenstars put their two children to
bed and went to sleep feeling happy.

But at three thirty in the middle of the
night, Pawl sat up in a cold sweat, breathing heavily.

What had woken him? The window was open
slightly, just as they had left it, and the netting was shimmering
gently in the night breeze. He turned to his wife and gave her a
kiss on the cheek. She stirred and reached up sleepily to touch her
face.

Pawl lay back down and told himself that it
must have been the rich food upsetting his stomach. But there was
one thing he had to check before going back to sleep.

He lifted his left hand and unclipped the
face of his watch.

As he did so, his whole body began prickling
with fear.

He rubbed his eyes furiously to make sure he
wasn’t seeing things.

But there was no mistaking the colour of the
xinary.

It was glowing deep, blood red.

“
Excuse me, sir,” Seckry
asked. “Is this the stop for Estergate High?” He clutched a hand
rail and nearly toppled over as the rickety monorail he was riding
to his new school suddenly veered to the left.

The man sitting opposite him rolled his
eyes.

“
Yeah, right, thanks,”
Seckry said as his backpack nearly slid out of his grip and onto
the lap of an elderly lady.

It was Seckry’s first day at his new high
school in the city of Skyfall, and he was already more than a
little overwhelmed. The monorail had taken them through a winding
maze of high rise buildings and dimly lit tunnels and they had even
passed through what seemed to be someone’s living room at one
point, but as it sped around another corner, Seckry blinked in
amazement.

The buildings on either side of the tracks
had opened up and the entire expanse of the city was now visible.
It was gigantic; a vast, circular, living thing with a cluster of
tall structures at its centre. The early morning sun was rising
behind them, casting a pink and orange haze, and a couple of blimps
were hanging sluggishly in the air.

As he admired the view, something caught his
eye. It was a long, white tower, just to the right of the city
centre, jutting into the clouds and engraved with some kind of
logo. Seckry had to strain to read it, but as he did so, his
stomach churned.

It was the headquarters of the Endrin
Corporation, a scientific research company that Seckry had come to
despise over the past six months.

Two years ago it had been discovered that
Seckry’s hometown, the quiet village of Marne, had been sitting on
a pocket of unstable energy. There had been government talks and
meetings and arguments about the extraction of it, and there had
inevitably been protests from the people of Marne, but a year and a
half later it was officially announced that Endrin were to be
setting up an extraction site right at the heart of the
village.

Seckry remembered the letter they had
received from the government.

‘
In the best interests of
the people of Marne,’ it had said. ‘The village is no longer a safe
place to reside. All residents will be evacuated and given
sufficient accommodation in neighbouring cities.’

And so it was that Seckry, his mum, and his
sister had been forced out of their home and sent to the east
partition of Skyfall, while all of Seckry’s friends had either been
sent to other, smaller cities, or to one of the three other Skyfall
partitions, the north, the west and the south.

They had only been in the city for one night,
and Seckry was already missing home terribly. He missed the cobbled
streets of the village, the town clock at the centre, the
ellonberry fields, his friend, Busbee Knowles, and his house. But
most of all, he missed his bedroom.

He had woken up numerous times last night and
tried to reach for his bedside table before realising that it was
no longer beside him, and that he was no longer in the home that he
knew.

The monorail swerved to the right and Seckry
gripped the handle he was clutching onto even tighter. He peered
out of the window. Was his new school really this far away from his
flat?

Sitting a few seats away was a tall boy with
spiky black hair and pierced ears. Seckry guessed he was about the
same age as himself, fourteen, and hoped he was heading to
Estergate too, that way Seckry could follow him. Seckry would have
asked the boy if that’s where he was heading, but he was wearing a
chunky set of headphones and was bobbing his head emotively, with
his eyes closed.

Before Seckry had time to contemplate getting
the boy’s attention, there was a deafening screech and the monorail
slowed to a halt. An enormous contemporary building made of glass
and wood flooded into view.

The entrance to the place was swarming with
teenagers of all ages and a large plaque just outside the carriage
read:

The man opposite Seckry turned to him and
said, “This is the stop for–”

As he stepped off the carriage he lost sight
of the spiky haired boy, but that didn’t matter now, the monorail
had delivered him right to the school’s entrance.

Seckry had never seen anything like it. It
was a million miles away from his old, quiet school in Marne.

The main gates, at which Seckry was standing,
opened out into a wide courtyard with a statue at its centre, and
beyond that lay the main building, which was shaped like a huge,
oval tube, with random glass corridors poking out of it here and
there and leading to other, equally oddly shaped classrooms and
offices.

After making his way through the swarms of
pupils gathered outside the main entrance, Seckry approached the
reception desk and told them his name and that he was a new
starter. A couple of phone calls were made, and a few moments
later, a friendly faced teacher with heavily rimmed glasses
appeared from one of the corridors.

“
Welcome to Estergate
Institute.” She gave him a warm smile and shook his hand. “My name
is Mrs Furrowfog. Now, if you’d just like to follow me down the
corridor here where we can have a quick chat before introducing you
to Mr Gobbledee, the headmaster.”

A Knight to Remember by Christina Dodd
Hover by Anne A. Wilson
Inverted World by Christopher Priest
Happy Together: 500 Things to Do for and With by Ken Shafer
Las Christmas by Esmeralda Santiago
Romance: The Billionaire Alpha Collection by Ward, Penny
Tom Swift and His Deep Sea Hydrodome by Victor Appleton II
Saint James, Elle - Unbridled and Untangled [The Double Rider Men's Club 8] (Siren Publishing Ménage Everlasting) by Elle Saint James
Rise of the Faire-Amanti (The Ascendant Series Book 3) by Raine Thomas
Insatiable by Adriana Hunter